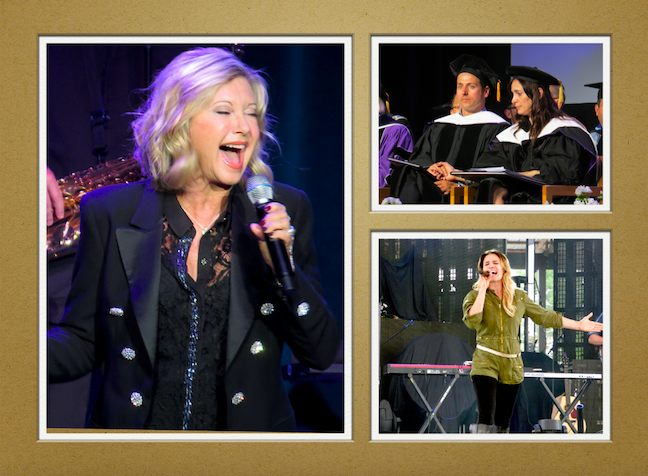 Just think: 20 years ago, we thought Y2K would turn us into “The Flintstones.”

Now, as 2020 approaches, we’re wondering how long it will be before we become “The Jetsons.”

Flying cars and cities in the clouds don’t seem all that far-fetched in light of advances in virtual reality, autonomous vehicles and voice-operated everything.

But the more things change … the more we look for that “Friends” reunion.

Which is to say, wherever tech takes us in the next 10 years, it’s a safe bet we’ll still gather around the couch to watch must-see programming, head to the theaters (or IMAX) for the latest blockbuster, and sing-along to our favorite songs on the way to work.

There is something to be said for consistency and comfort.

Moreover, when political pundits are arguing over what the other party did wrong, or the Sabres are losing (hopefully that trend ends in the new decade), what do we do?

We change the channel.

We look for escape.

We seek out our favorite entertainers to ease our minds – to melt our stress – via a favorite movie or beloved song.

I was downright blessed to connect with many of my favorite actors, musicians and creators in the 2010s – some of the people who brighten my mood after a hard day at the office or a long night typing out stories.

Here are some of my favorite celebrity interviews of the past decade:

Clockwise from left: Sarah McLachlan at Artpark, Amy Grant at the Riviera Theatre and Ed Roland at Fallsview Casino.

•Olivia Newton-John – Somehow, I managed to mostly miss the “Grease” craze while growing up. It wasn’t until my senior year in high school, when Niagara Catholic staged its own version, that “Grease” lighting finally hit me.

For, um, you know, research purposes, I watched the film once or twice – maybe 17 or 18 times, if I’m being honest.

I was then, and continue to be, smitten with Olivia Newton-John’s talent – both musical and theatrical – as well as her charity work. As she continues to battle cancer, Newton-John relentlessly raises money and awareness for an Australian hospital named in her honor.

We chatted before her Seneca Niagara Resort & Casino concert in 2016.

•Raine Maida & Chantal Kreviazuk – Two of Canada’s top musical artists and philanthropists – each a talented singer I had interviewed prior to group and solo performances – just happened to stop by my alma mater in 2016. Niagara University presented honorary degrees to Maida, the lead singer of Our Lady Peace, and Kreviazuk (who also served as keynote speaker) as part of its graduate commencement. I was fortunate to land an exclusive interview with the husband-wife duo prior to the walk across stage.

Western New York is home to one of the largest Christian music events in the entire world. Kingdom Bound put Buffalo on the map more than three decades ago, and Kingdom Bound Ministries continues to book the genre’s top acts.

In 2019, I chatted with Rebecca St. James, TobyMac, Jeremy Camp, Jordan Feliz, Kristian Stanfill of Passion, Bart Millard of MercyMe and Jen Ledger of Skillet and LEDGER. In recent years, I had the good pleasure of speaking with Matthew West, for KING & COUNTRY, Switchfoot, Danny Gokey, Britt Nicole, Colton Dixon, Love & The Outcome, Hollyn and Matt Maher, amongst others.

Thanks to KB, there are few Christian artists I haven’t connected with – though there was one I had sought out for years with no luck. …

•Amy Grant – In press releases, Grant’s team always notes her impressive and unexpected rise in pop/rock following the release of “Heart in Motion,” which sold 5 million copies upon its debut in 1991. It was then unheard of for a Christian artist to cross over with such success.

To me, as a 12-year-old, I didn’t know Grant’s backstory – I just really liked “Baby Baby” and “Good for Me.” In fact, this was one of my first cassettes. (That’s the table-leveler your parents bought before CDs. Come to think of it, you might not know what those are, either. Just Google it.)

To say this interview was a long time coming is an understatement. Grant and I spoke ahead of her fall 2019 show at the Riviera Theatre. She was down-to-earth, funny, and keenly aware of what makes a live show shine. 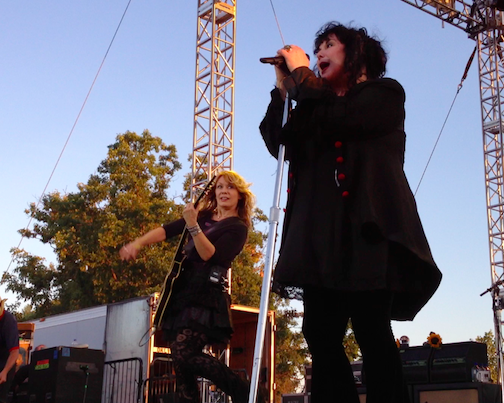 Nancy and Ann Wilson of Heart performing at Artpark.

Western New York’s premier outdoor music venue – so says a slew of awards – has welcomed many a musician to Lewiston (and the pages of The Sentinel).

The Artpark interviews that top my list include the showstopping Lindsey Stirling (2018’s No. 1 interview); “Weird Al” Yankovic, whom I grew up admiring for his parodies – and, of course, “UHF”; Tears for Fears’ Curt Smith, who, along with Roland Orzabal, put forth one of the best concerts I’ve ever attended; and Sarah McLachlan, whom I consider the music industry’s top female vocalist.

√ I was also super-jazzed to interview the iconic Garth Brooks ahead of a long-awaited Buffalo performance in 2015; all three members of The Band Perry following the release of “Pioneer”; Peter Cetera, my favorite member of Chicago – and, yes, a man who will fight for your honor; Kid Rock, who came to town in 2011 with checks for local charities; Brian Wilson and Al Jardine of The Beach Boys; Goo Goo Dolls singer John Rzeznik, former Creed leader Scott Stapp and Counting Crows vocalist Adam Duritz, whose answers were remarkably revelatory; Canadian rock royalty Jeff Martin of The Tea Party; Sydney Sierota of Echosmith made me feel like a “Cool Kid”; KT Tunstall is always a hoot; and last but not least, Ed Roland, who fronts arguably my favorite band of all time, Collective Soul.

I’ve grown quite fond of “Chicago P.D.,” an edge-of-your-seat crime drama with interesting characters and storylines not often seen in modern-day procedurals. Following several articles, I was invited back to #OneChicagoDay this fall, where I earned a sit-down with the entire cast, as well as showrunner Rick Eid, director Eriq La Salle and creator Dick Wolf.

A second stellar on-set visit was to see the cast and crew of Syfy’s “Warehouse 13” in 2014. This included facetime in Toronto with stars Eddie McClintock, Joanne Kelly, Allison Scagliotti and Saul Rubinek.

The 2010s brought forth some of my all-time favorite TV shows, including:

•“Fringe,” which is one of the most underrated sci-fi shows of the 2000s. Over the course of five seasons, I chatted regularly with stars Anna Torv, Joshua Jackson and John Noble; showrunners J.H. Wyman, Jeff Pinkner, Alex Kurtzman, Roberto Orci and some guy named J.J. Abrams – plus – get this(!) – guest stars Peter Weller (he of “RoboCop” and “The Adventures of Buckaroo Banzai” fame); “Back to the Future” star Christopher Lloyd; and Leonard freaking Nimoy, who is forever our “Star Trek” Spock.

•And the ying to my yang (you know what I’m talking about, Psych-Os), drama-comedy-wise, was “Psych.” That this show lives on in stand-alone films five years after ending is a testament to the impact it had on fans. It was brilliantly witty and laugh-out-loud funny.

Though I often shared stars James Roday and Dulé Hill with other reporters via conference calls, I had the good fortune of securing one-one-ones (or, I guess, one-on-twos) with co-stars Maggie Lawson and Timothy Omundson, who gave the show much-needed heart. 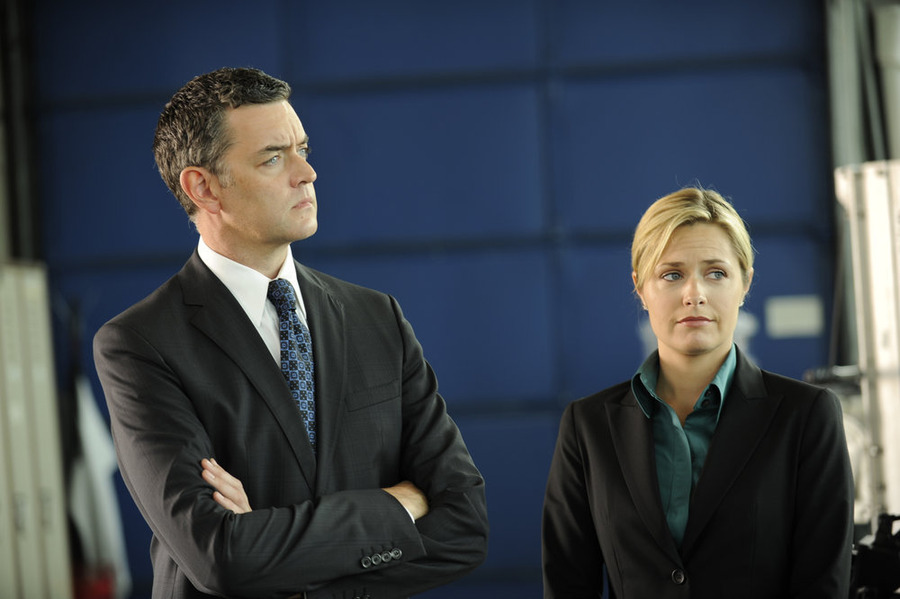 Who didn’t love Jack Bauer – and want more of his at-all-costs brand of TV world-saving?

As “24: Live Another Day” began, I spoke with stars Kiefer Sutherland, Mary Lynn Rajskub and Yvonne Strahovski (who also starred in “Chuck,” another of my all-time favorites).

•It took “Marvel’s Agents of S.H.I.E.L.D.” a season or two to really get things going – not to mention find creative ways to continue “The Avengers” story without, well, any Avengers. The show began to work best when it found a way to humanize the MCU.

Of course, it never hurts to have a few super-powered players – including two I interviewed: “Ghost Rider” Robbie Reyes (Gabe Luna) and Yo-Yo (Natalia Cordova-Buckley).

Unique side characters also shine on “S.H.I.E.L.D.” I particularly enjoyed the work of interviewees Brooke Williams (who was Snowflake on season six) and Maya Stojan (Kara Lynn Palamas on season two).

√ Shantel VanSanten is an amazing interview – and her character didn’t deserve a poorly written fate on “Shooter”; “Bones” stars David Boreanaz and Emily Deschanel chatted with me solo and as a team; Abigail Spencer was every bit as much fun as her character on “Timeless” (I also quite enjoyed chatting with her costars, Goran Višnjić and Matt Lanter); Allison Miller is a revelation on “A Million Little Things”; Emily Beecham’s “The Widow” was wickedly awesome on “Into the Badlands” – as she was on the phone; Melissa Roxburgh spilled no “Manifest” beans, but was a fun interview anyway; Rachael Leigh Cook and Jewel got me hooked on Hallmark; "Leverage" was a blast, and so was Beth Riesgraf; Violett Beane gave me a vegan nacho cheese recipe when we discussed “God Friended Me” last season; Jessica Camacho, who is terrific on "All Rise," spoke of TV's "Taken"; Hisham Tawfiq, Harry Lennix and Megan Boone got me on “The Blacklist”; Hayley Orrantia (“The Goldbergs”) and Jamie McShane (“The Passage”) were two of my favorite interviews of the 2018-19 TV season; Jennifer Love Hewitt was born the same year as me, and I spent many hours watching her on TV and in films throughout the 1990s; Tom Cavanagh starred in “Ed,” likely my second-favorite show of all time, before we spoke about “Royal Pains” and he became a fixture on “The Flash.” Cavanagh actually chatted with me on my birthday in 2012.

•Who knew my favorite baseball player of all time, Darryl Strawberry, and my very first celebrity interview, Olympic gold medal swimmer Summer Sanders, would share the screen on “The Celebrity Apprentice” in 2010?

Did you know he had just been in Buffalo for an event with the Bisons – or that she is a huge Bills fan?

As an added added bonus, I may or may not (may) have chatted with our commander-in-chief, President Donald Trump, as part of my coverage.

•Camille Ford and “Food Wars” visited the Queen City in 2010 to find out which restaurant had the premier chicken wing. The show tossed Anchor Bar and Duff’s into a winner-take-all battle. The real winner was Ford, who admitted a newfound love for Buffalo’s culinary treasure.

•WWF Superstar “Jake The Snake” Roberts” had incredible stories of his time in the squared circle, travels with a giant python, and nearly dying before Diamond Dallas Page set him straight. Roberts was headed to Niagara Falls Comic Con when we spoke in 2016.

I was on set, and in the back of Apple Granny Restaurant, when filming took place.

Three of my favorite performers of the past decade left this world too soon.

•Christina Grimmie was crushing “The Voice” when we first spoke in 2014. She was touring and creating impressive pop songs when we chatted again in 2016. Tragically, this remarkable young woman was murdered in Orlando following a show not four months later.

Grimmie’s family continues to carry on her legacy through social media posts and unreleased tracks.

•Chris Cornell was the frontman of pioneering alt-rock band Soundgarden and later supergroup Audioslave. He was a master craftsman, writing virtuoso rock and acoustic songs for himself, his bands, and for movies including the first “Avengers” film.

•When it came to interviews, no one could top Eddie Money. All one needed to say was “Hello,” and he’d be off to the races. Money would share stories of his pre-music career days, explain the origin of his hit songs, and recall memories of the cities he toured.

“The Money Man” was showing the rest of the world his charming personality on a reality show centered on his life and family when he lost a battle with cancer in September. 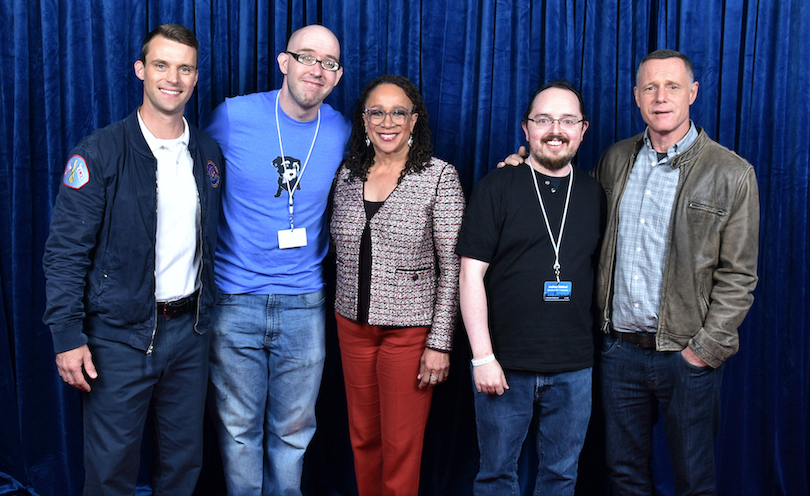