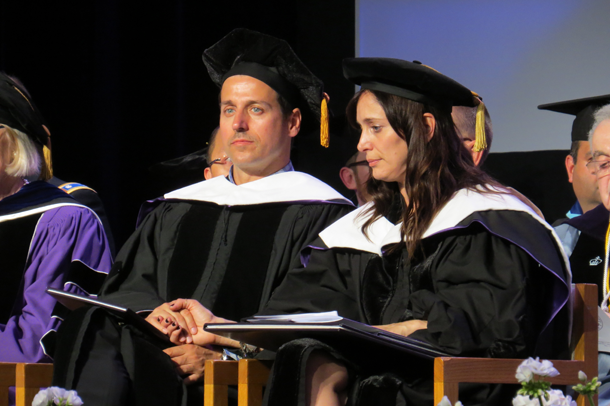 At the occasion of his inauguration two years ago, the Rev. James J. Maher, C.M., president of Niagara University, said, "We are a community embracing the eternal mission of St. Vincent de Paul, making central the lives of the poor and marginalized. ... We will find our identity and destiny in the eternal legacy of St. Vincent de Paul, a man of immense intellectual and social gifts whose life turned from a status-seeking upwardly mobile track, to one that turned toward human misery and suffering, offering the healing balm of divine mercy and compassion."

Two ideal representatives of that philosophy are Niagara's 2016 graduate commencement guests: Raine Maida and Chantal Kreviazuk. Mahar presented each with an honorary degree on Thursday.

The Juno award-winning musicians - he's the frontman of Western New York's favorite Canadian band, Our Lady Peace, while she's a successful solo artist who recently collaborated with Drake and Kendrick Lamar - have used their fame and resources not for self-promotion or creature comforts, but rather to better humanity. 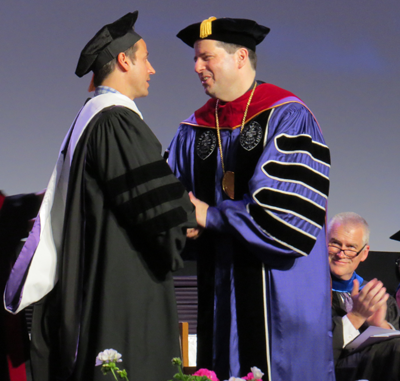 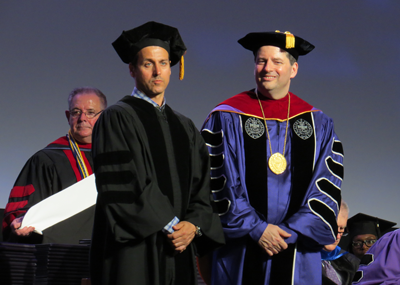 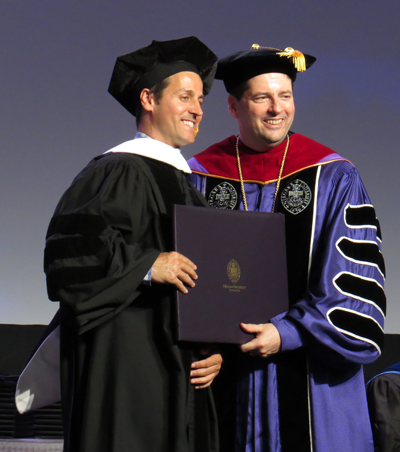 At the 2014 Juno award ceremony, Maida and Kreviazuk were presented with The Allan Waters Humanitarian Award, which "recognizes an outstanding Canadian artist whose humanitarian contributions have positively enhanced the social fabric of Canada and/or whose impact can be felt worldwide."

In recognizing the duo, the Juno committee shared, "While Kreviazuk and Maida are quick to lend their time to the studio and stage, they are equally committed to lending their help to those in need - both in Canada and internationally. Kreviazuk's an honourary founder of War Child Canada, one of the many organizations the married couple has embraced. They have visited Iraq, Ethiopia and the Congo on behalf of various causes, including women's rights, war refugees and child education. Maida launched War Child's Busking for Change program, in which Canadian musicians have raised money for children in the world's most devastated regions, supporting initiatives such as the construction of schools in the Congo. Maida also took part in War Child's assessment trip of Darfur, which laid the groundwork for the organization's program in that region."

Kreviazuk also has lent music to War Child's Enough Project, aiding women in the Congo, while teaming with the Canadian Mental Health Association (and starring in an indie film) to combat and overcome the stigma of mental illness.

Maida, meanwhile, has worked with Apathy is Boring, which motivates young people to get involved and learn more about the political process.

The pair recently became members of the Order of Canada, "recognizing their efforts to raise awareness and support for numerous causes, including human and animal rights, mental health, education and the environment."

Speaking to NFP Thursday, just before taking the Gallagher Center stage, Maida said, "When you really analyze maybe why we're here, I think it has to do with service through definitely our music careers. But the way they started to just parallel themselves, I think we really aligned ourselves with the different causes that we've tried to attach ourselves to in support over the years just as much as we do with our music. And I learned that very early on. When I talk about artists like Peter Gabriel or Michael Stipe from R.E.M., and Sinead O'Connor and Bono and those types of artists, they were really kind of my blueprint for the way - or the ease of use of having those two separate existences kind of coexist really well." 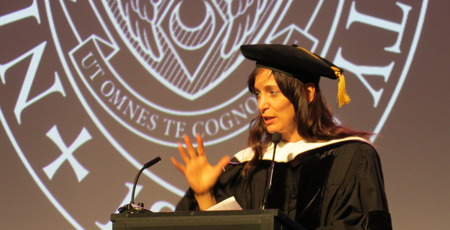 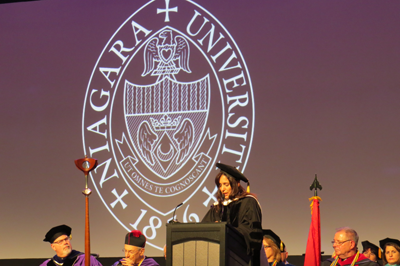 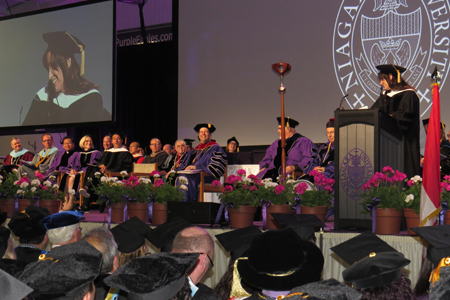 Kreviazuk said, "The greatest aspect of being the artist Chantal has been when I receive information, requests, from people - great people - who are touched and who are motivated to better the world. I often don't feel like I'm necessarily that person, because these are people who wake up each morning, and they go to, essentially, a vocation that would be my avocation. They've committed their lives to something that's their call to action. And so, all we really end up doing is supporting other people who have that call to action that's so powerful within them. And they're following their heart; and so Raine and I are able to support those people."

"The thing is, that I have felt my greatest education - and it's been exponential - has been from the moment that I said 'Yes' to one of the first requests that I had when I became an artist that people might want to help out with a cause," she added. "It's just incredible. They send you this email or a letter and you read it, and you go, 'Wow. They do what?' And 'I didn't know that there were people like that, who have that adversity or that challenge.' And 'That sounds exactly like something I'd like to do.'

"You get to learn. And then you want to learn more. And I think that's probably been the greatest gift for Raine and I, is that it's made us, as a couple, be interested in continuing to learn how to be. Because citizenship is something that you take from the floor to the ceiling of your life. Right? It's every room of your life. It's how to be a great parent. It's how to be a great spouse. It's just something that doesn't stop.

Kreviazuk said a trip to Iraq earlier in their relationship "set the pace for being a couple that was going to (give back)."

Maida said, "I grew up in a heavily Catholic community. I went to Catholic elementary school, high school. I think that service - you don't notice it, or you don't understand it as much when you're a child, but I think (I) definitely started to realize it once I was out of that community. ... Once you start traveling, you see the core values that you learn as a child. And I think that's incredibly important and sustainable. And now we're trying to pass it along to our children, actually."

"It's something that we try to instill more through actions rather than ... just talk, sometimes, is cheap, as the cliché goes. But I think it is true. ...

"I think it's working. I think they get it. They're good citizens. They're good humans. And that's kind of all you can ask for. It's really transcended from my childhood into my own kids' childhood, which is amazing."

Kreviazuk said, "It's all about being kind. Being receptive to other peoples' situations."

At the commencement address, Maida and Kreviazuk each received an honorary doctor of humane letters degree from Maher.

NU's most esteemed professor, Dr. John B. Stranges, read citations that proclaimed, among other things, "Mr. Maida embodies many of the Niagara University core Catholic and Vincentian values, namely, creativity, difference-making and global citizenship." And "Her philanthropy and charitable work (is) Vincentian in nature. ... We are proud to call Chantal Kreviazuk a friend of Niagara University."

"Chantal Kreviazuk and Raine Maida have successfully used their platform as world-renowned musicians as a means for advocating for the poor and marginalized," Maher said Friday. "As a Catholic and Vincentian institution, we consider it our moral and faith imperative to assist all of God's people whenever and wherever we are needed. Clearly, Chantal and Raine possess a similar personal mission, and we were very pleased to honor them for the excellence and nobility of their life's work." 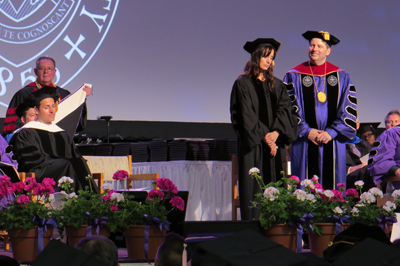 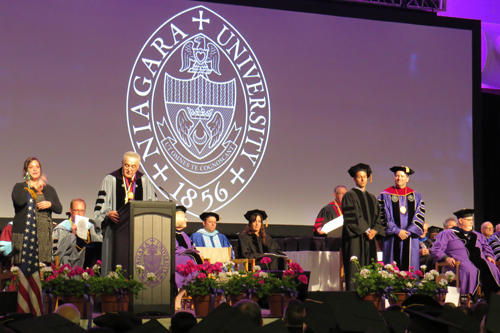 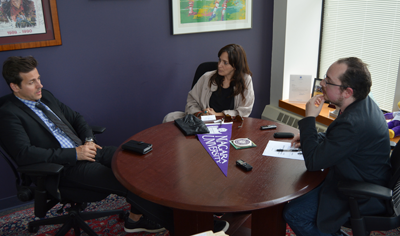 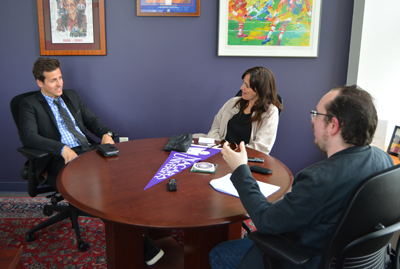 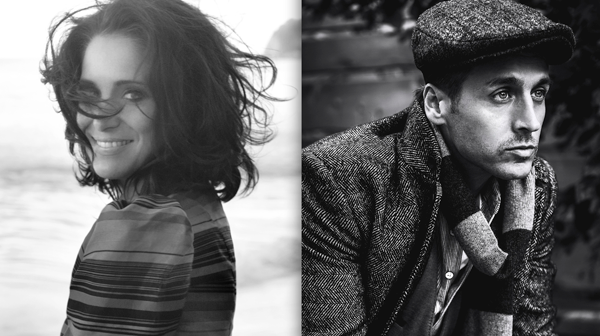 Chantal Kreviazuk will release her sixth studio album, "Hard Sail," on June 17. The video for "Into Me," the record's first single, is now on YouTube.

"It's been a long time coming," Kreviazuk said of her first full-length album since 2009's "Plain Jane." "I really like it, because I can see where I grew as a person. And so that's really cool - like listening to my first album, second album and now, cut to six, it's like 'OK. Yeah.'

"Even though I didn't make an album in between - I seemed to have missed a couple album cycles - but I was growing as an artist, because I was sharing my passion for music with other artists who were in their building place, as well, as artists. So I think they've influenced me, and I was able to express myself and work with incredible, incredible artists like Kendrick Lamar to Kelly Clarkson."

As songwriters, "Raine and I have recorded the best voices in the world, and worked with the greatest talents. It's been a really exciting time."

Maida and Kreviazuk also formed the musical duo Moon Vs. Sun. They posted a video for the song "I Love It When You Make Me Beg" and have performed together in Toronto.

"It's great," Kreviazuk said of the musical partnership.

"We're there," Maida said. "We're almost about to dive deep into it. We're just going to get through the next couple months."

"We've had a teaser," Kreviazuk said. "We've wrote some songs together and did a couple small pockets. It's amazing.

"We're together more, which means we fight a bit more. But we have more fun together, too. And, you know, one of the things that is really inspiring to me is that a lot of the experiences that I've had as an artist have been, certainly, a little bit charmed, (but) I've been alone. ... It's been sad. I've been alone for all these things. And I often feel as though they didn't happen because, without your witness with you, it's like they didn't. You can go home and share it, but, you know, it's not the same.

"So now I feel like we're about to embark on having a lot of experiences together. And we have. We have already. It's started. So, it'll be nice to have my partner with me."

Maida acknowledged Our Lady Peace has a special connection with Western New York. OLP performed to a jam-packed Rapids Theatre in Niagara Falls in the summer of 2014. The gig was the band's only American concert date.

"The last show that we did here ... that goes down as one of the top 5 OLP shows ever," Maida said.

"Yeah, he freaked out about that. I remember after you played it," Kreviazuk told Maida.

"There was an energy that night - and we've done - Lewiston, alone, you know, playing the outdoor stuff, was always amazing. But, that club show, I think it was imprinted in everyone's mind," he said. "It was just an unbelievable show. For whatever reason - the way the band was playing; the energy of the crowd; that theater's pretty amazing - it was pretty wild."

"It was incredible," Maida added. "We have yet to experience something like that since. That says a lot."

Chantal Kreviazuk's second single, "All I Got," is available now on iTunes. Visit http://www.chantalkreviazuk.com/ for more information.

Watch and listen to Chantal Kreviazuk's super high-quality new single, "Into Me":