It’s not even halfway into summer, and Artpark & Company already has presented patrons two festivals, a handful of ’90s hitmakers and four consecutive weeks of Rock and Roll Hall of Fame acts.

But you can’t please everyone; and, if there’s been one complaint this year, it’s that the headline acts weren’t as high profile (read: famous) as in past seasons.

That’s about to change.

Two of the biggest acts headed to Artpark are musical icons – each for a very different reason.

“Weird Al” Yankovic is a five-time Grammy winner and the top comedy recording artist of all time. He has sold millions of records parodying Michael Jackson (“Eat It,” “Fat”), Madonna (“Like A Surgeon”), Queen (“Another One Rides the Bus”), Nirvana (“Smells Like Nirvana”) and Coolio (“Amish Paradise”). Yankovic is a pop culture legend recently seen as a T-shirt on “Stranger Things,” and paying homage to Lin-Manuel Miranda’s Broadway masterpiece with “The Hamilton Polka.”

Sarah McLachlan, meanwhile, is perhaps the finest vocalist in North America. The Canadian singer-songwriter has sold more than 40 million albums, with hit songs including “Angel,” “Sweet Surrender,” “Possession,” “Building a Mystery,” “Adia” and “I Will Remember You.” McLachlan was inducted into the Canadian Music Hall of Fame as part of the 2017 Junos – an awards show she hosted in 2019. She founded both the groundbreaking, all-women-led Lilith Fair Festival and the Sarah McLachlan School of Music in Vancouver. 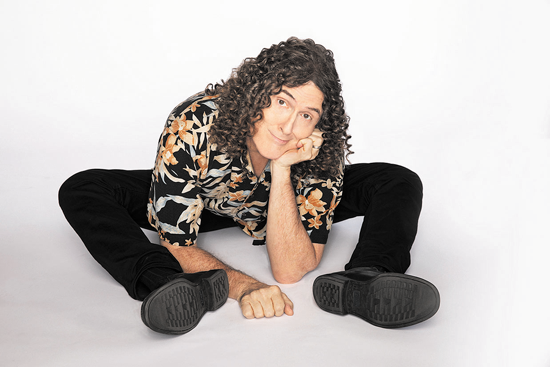 2018 took an unexpected turn for “Weird Al.” After years of touring with outlandish costumes, outrageous sets and over-the-top production, Yankovic left his bells and whistles behind for the “Ridiculously Self-Indulgent, Ill-Advised Vanity Tour.”

“You know, honestly, it was the most fun I’ve ever had on tour,” he said in a recent phone interview. “It was scaled down. I really didn’t know how it was going to go, because it was a huge kind of roll of the dice. It was a big experiment. I didn’t know that anybody would even want to come to a show like that. But we wound up selling out pretty much everywhere. The fans kind of went nuts for it. A lot of people said, ‘This is my favorite tour ever.’ ”

Each concert provided Yankovic an opportunity to showcase something sometimes lost in translation: his voice. Fans were treated to an assortment of original songs and deep cuts.

“And it was just as simple of a tour as we could possibly make it,” Yankovic said. “It was just very intimate and organic. The whole vibe was supposed to be, like, me playing in people’s living room. It feels like you’re just kind of hanging out with me. And I really enjoyed that vibe.”

Though Yankovic admitted he had “too much fun” with the “Vanity” tour’s almost 80 performances, the polka player decided to revert back to the norm for 2019.

“I like doing the big shows, too. I’m having have a great time this year” with the “Strings Attached Tour,” he said.

Artpark welcomes “Weird Al’s” “most extravagant” show on July 23, as part of the “Tuesdays in the Park” concert series.

“We’re back to playing the hits,” he said. “We’re back to doing the costume changes and props and a big video screen. And on top of that, we’ve got female background singers – and these are the same women that I’ve recorded with in the studio for decades. I mean, these are like top-notch singers. And we have a full symphony orchestra at every show. Local musicians. And it’s a big show.

“You haven’t really heard ‘Amish Paradise’ until you’ve heard it with a full symphony orchestra.”

In fact, Yankovic will be joined by both his own backing band and a 41-piece orchestra.

“It sounds kind of ironic, because you wouldn’t necessarily think ‘Weird Al’ Yankovic and ‘symphony orchestra,’ ” he explained. “But the impetus of it was, a couple years ago, I did two nights at the Hollywood Bowl; they invited me to headline a show with their orchestra. They had like an 85-piece orchestra. And I did the show with them. And it was such a – almost a religious experience – it was kind of mind-blowing. And we did our ‘Star Wars’ songs. And they started off the ‘Star Wars’ theme, and it sounded so huge. I mean, I felt like I was inside the movie.

“And, you know, I got a little teary-eyed. I was like, ‘This sounds amazing. And wouldn’t it be great if we could do a whole tour like this?’ And somehow we were able to put that together. So now, we get to give people the whole ‘Weird Al’ orchestral experience.”

Artpark & Company Director of Marketing and Sales Dave Wedekindt said, “Those who might dismiss ‘Weird Al’ as just a silly act from the ’80s should see his live show. He’s not only a pop culture icon, but a very talented musician and performer who still attracts big crowds.” Yankovic won’t be the only singer accompanied by a powerhouse corps of musicians.

McLachlan will join with the Buffalo Philharmonic Orchestra for a July 31 concert inside the Artpark Mainstage Theater.

She said, “There’s something incredibly glorious about performing with a symphony. And it’s not just from an egotistical point of view. It is like you get to be in your own cinematic experience. It just feels like, ‘Oh, I’m in my own movie.’ This beautiful, huge wall of sound supporting the music that I’ve made. It’s just so much fun. It’s so beautiful, and powerful; I love it.”

In a phone interview, McLachlan noted the BPO would be on stage with her for the duration of the show.

“They are a great symphony. And we basically come in early in the day, we run the entire show. I play the stuff for the first time – and they’re usually better than I am (laughs). You know, they’re more well-versed, instantly, than I am. And then that night, we do the whole show,” she said.

McLachlan was pitch-perfect when she performed at Artpark in 2014 – though, really, when isn’t she spot-on? While note-for-note precision is the norm with her, McLachlan said that’s never her goal.

“Being prepared is important,” she explained. “I warm up for about an hour-and-a-half. And because this is my skill, it’s something I’ve been doing for many, many years. I’ve put like 10,000 hours in, and I can sing very well. But for me, it’s about creating joy.

“I would say it’s kind of a selfish thing, because, when I sing, when I get on stage and sing, it’s like I’m living my purpose. And I get to tap into something that’s bigger than myself. And I think that’s because there’s people there. I steal that energy. I feel them, and I feel this – it kind of sounds ‘whoo, whoo’ – but really this kind of beautiful spiritual connection. And it just feels really like being completely full and completely empty at the same time.

“I don’t go out there with a perceived expectation of, you know, ‘I have to hit that note.’ I kind of know I’m going to hit that note. But you know, quite frankly, if I don’t hit the note, it’s not about perfection. It’s just about being in the moment, and giving myself to it – giving myself over to it. And I love doing that. It’s not a hard thing. It’s really easy for me. It just feels like the most natural thing in the world to do.”

In concert, fans respond to McLachlan’s music with a wide range of emotions – everything from tears to euphoria, bliss to laughter.

“So, I just also feel this whole rush of gratitude for the fact that ‘I get to do this every night?!? And people like it – and they’re paying me for it?!?’ That’s kind of amazing,” she said. “It’s so amazing to me that this little thing that I’m creating – in a pretty selfish manner; like, I write for myself – I don’t write thinking about anybody else. I write because I need to. It’s my therapy. And the fact that I can then give that to the world – and make an impact, help people – I love that. I love the idea that something I created is helping other people.”

Wedekindt said, “This is one of the more highly anticipated concerts of the season. Any concert by Sarah is special, but it will even be more special with her performing with the Buffalo Philharmonic Orchestra.”

“The BPO musicians are thrilled to be performing with the iconic Sarah McLachlan,” said Patrick O’Herron, BPO director of marketing. “Some popular music lends itself to a symphonic ensemble. Sarah’s music does just that – with its rich harmonies and lyrical lilts, it is well-suited for symphonic expansion. It was a natural fit for a BPO collaboration.”

Tickets for both “Weird Al” Yankovic and Sarah McLachlan are on sale now. For more information, visit www.artpark.net, or stop by the box office at 450 S. Fourth St.