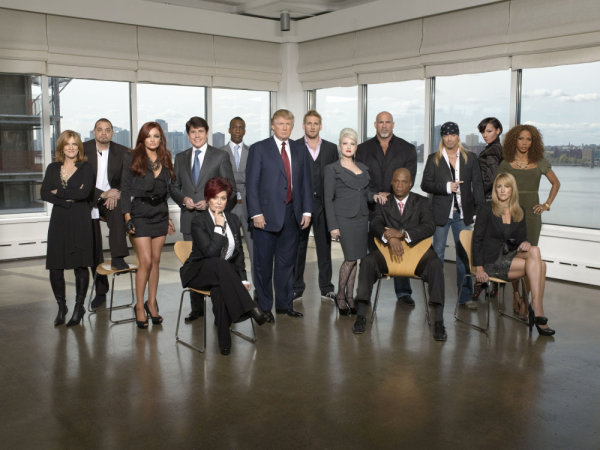 The cast of "The Celebrity Apprentice." (photo by Mitch Haaseth/NBC)

Money for charity up for grabs when 'Celebrity Apprentice' returns

After watching Joan Rivers and Annie Duke come this close to mauling each other on last season's "The Celebrity Apprentice," the current roster had some trepidation about jumping into Donald Trump's boardroom.

"I never watched last year's, but I heard so many things about last year's show and everything," Darryl Strawberry tells BTS.

"It was actually a bit scary for me to even consider to do it," co-star Summer Sanders says.

Those fears were alleviated, however, when Strawberry, Sanders and the rest of the cast realized hundreds of thousands of dollars were up for grabs.

"We were there for a great cause - a great purpose," Strawberry says. "We were playing for charity, and that's the most important thing."

Indeed, each of the 14 celebrities participating in Trump's game is competing for a cause of choice. Each week, the men and women square off in various New York City-based tasks. The winning team's project manager receives a financial reward for his or her charity.

"I, personally, was just super stoked to have challenges; to work really hard and try to accomplish the task; and have a good time while doing it," Sanders says. "And I think there were a lot of people that were right there with me. They wanted to have fun. They wanted to do well. And across the board, everyone was just extremely competitive."

Strawberry enjoyed the process, too. He admits, though, that the tasks were far from the cushy, day-to-day doings many celebs are used to.

"It's fun, but it can be aggravating, too, at the same time, because it's a long day," he says. "You talk about putting a challenge together with five or six heads and, you know, everybody has their opinions and their thoughts. Sometimes you just have to sit back and just say, 'Whatever. I'm going to let someone else run it.'

"It's a challenge - that's why it's called a challenge. It's (called) creative; you have to be creative. It's called team; you've got to do teamwork. If you don't play together as a team, there are consequences. And I think we all realize that."

Standing between each celebrity and that prize money is the boardroom - and a grilling from Trump. One person will reign victorious, and one will hear Trump's famous phrase: "You're fired!"

"The boardroom is exactly what I thought it would be like, it's very intense in there," Bret Michaels says. "You go in - again, and I want to say this, I was very excited first of all to be on the show. And for me being a diabetic myself and having, you know, lifelong diabetes, it was intense in there. I went in to fight for my charity and (that's) very personal for me. And when I went in there, it was exactly how I saw the other two seasons: very intense."

"It's insane," Sanders says. "It wasn't my strong suit; let's put it that way. Not to mention the fact it's extremely hot in there. The very first boardroom we had, we were all sweating so bad I thought I was going to pass out.

"I'm not sure if they did that to us on purpose, or whether that was just the effect of being around Mr. Trump."

"The Celebrity Apprentice" airs Sunday at 9 p.m. on NBC.

Personal objectivity goes out the window when it comes to your childhood hero.

When the third cycle of "The Celebrity Apprentice" premieres Sunday (9 p.m., NBC), I'm rooting for Darryl Strawberry. The former New York Mets outfielder was my absolute favorite athlete growing up. In the eighth grade, I shaved a "44" in my head (that was his number when he signed with the L.A. Dodgers). In high school, I pledged allegiance to the Yankees when The Straw signed with the Bronx Bombers.

As it turns out, I'm not the only one in Western New York still rooting for Strawberry. Last summer, upwards of 1,000 people waited in line for more than two hours to pick up a Darryl Strawberry bobble head prior to a Buffalo Bisons baseball game. They also stood out in the lobby through the second inning waiting to shake hands or take a picture with the legendary slugger.

"When you're reachable, I think fans can see that," Strawberry tells BTS. "They feel that you understand more than just being a baseball player. You understand what it is to be a human being, and being able to relate to people; (to) interact with the fans, and love on the fans, and care for the fans.

"I think a lot of times fans see us just from a distance and (receive) the cold shoulder, or (athletes) don't give them the time of day.

"I always realized that fans are the most important. Throughout my career, I've always been that way. And I think that's why it's always been that kind of relationship with me with the fans. It's something that I would never change."

In addition to Strawberry, I'm pulling for Summer Sanders. The Olympic gold-medal swimmer is the first celebrity I ever interviewed. In the late '90s, she made an appearance at my high school, Niagara Catholic, to promote healthy eating.

Sanders has since married Erik Schlopy, a Buffalo native and Olympic skier. The two of them are staunch Buffalo Bills fans, and often fly in from their home in California to cheer the Bills on at Ralph Wilson Stadium.

"It's so fun to cheer for Buffalo," Sanders adds. "I came into it through marriage. He said, 'You need to be a Bills fan.' And then he became a Sacramento Kings basketball fan (for me).

"In my five years of being a diehard Bills fan, they've had a lot of heartbreak. And I can't imagine being a Bills fan from birth. Like, just the heartbreak of that team.

"But one of these years, they're going to go all the way. I can feel it."

Should my favorite celebs falter, I will likely cheer on Bret Michaels. The Poison frontman and "Rock of Love" himbo opened the 2008 Artpark season, and helped push the Lewiston venue into the rare-air rock amphitheater stratosphere.

Plus, Michaels grew up in a blue-collar family. Granted, it was in Pittsburgh. But blue-collars stick together, and that makes the rocker another "Celebrity Apprentice" competitor Western New Yorkers can back.