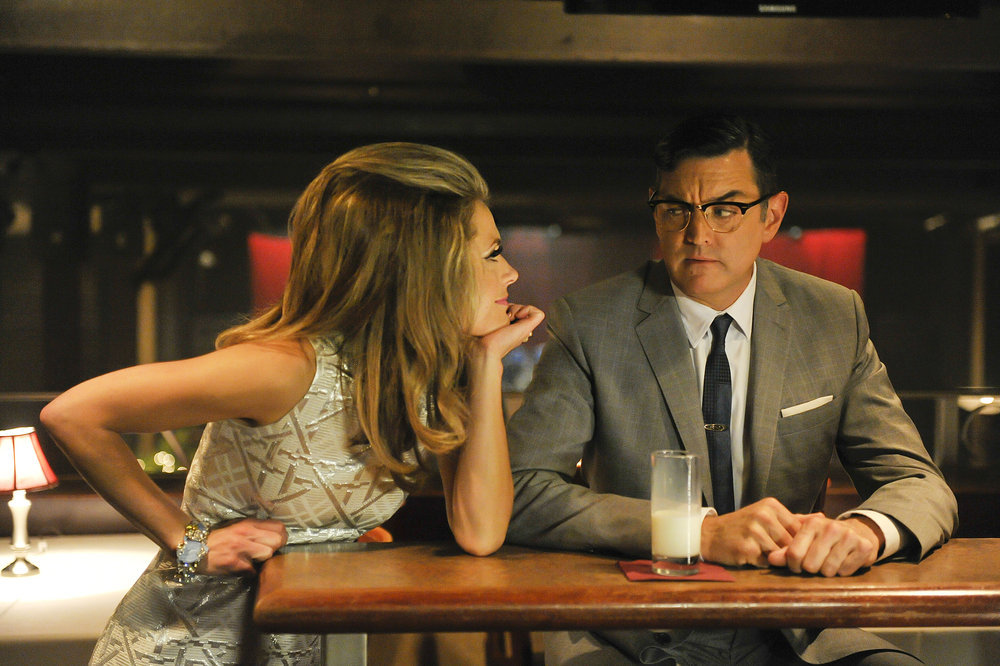 "Psych" is back with its final five episodes on the USA Network. Stars Timothy Omundson (Det. Carlton Lassiter) and Maggie Lawson (Det. Juliet O'Hara) recently teased the remaining episodes (and promised plenty of delicious flavor for the show's dedicated "Psych-Os").

First up is this week's "1967: A Psych Odyssey," which marks the return of actress Kirsten Nelson (Chief Vick), who also directed the episode. In "Psych Odyssey," Shawn and Gus (James Roday and Dulé Hill) try their hand at a cold, cold case. Chief Vick, meanwhile, informs her team of a job offer she's received - and of her intent to take Jules along with her.

"This episode coming up that Kirsten directed, it's tough, but it will probably go down as my most favorite episode - or at least one of my favorite episodes to shoot, but also on the page as it was written; what we got to do; and Kirsten directing was so fantastic. And Tim and I, I'm very excited about that one," Lawson said.

" 'Psych Odyssey,' is, I cannot believe what we pack into that episode," Omundson said. "It's like three episodes worth in one. It's really quite amazing what goes down."

"Psych's" second episode back is "Shawn and Gus Truck Things Up." Habitually a bit peckish, the best buds are dismayed to learn the owner of a food truck they've favored has been murdered.

"Food truck, there's huge life changes happening for Lassiter," Omundson said. Will Juliet stay, or will she go? What impact will that have on Lassiter, who is recently married and about to become a father?

On March 19, the fan-selected "A Murder on State Street" airs as an homage to the "A Nightmare on Elm Street" series. Roday directed the episode, which includes Sorvino and "Burn Notice's" Sam Axe.

"We got Kurt Fuller back. That's lovely. He plays another excellent version of himself," Omundson said. "We have the lovely and talented Bruce Campbell, who we've wanted to get on the show for years. He comes and just kicks boot-tay.

"Miro Sorvino comes to play with us - she plays with us for a few episodes this season. It's a perfect Roday vehicle, because he wrote and directed."

"Psych" wraps its eighth and final season March 26 with "The Break-Up." At the time of this interview, Omundson and Lawson didn't know if it would be a season or series finale, but she said, "I think every year we've had a really great finale, with a bit of a cliffhanger. But I think we also have tied every season sort of up as we take steps in our lives and our careers, and obviously our characters take steps in their lives and careers.

"I do think that this season, for the steps we all sort of take, we do sort of address (the end)."

"Psych" creator Steve Franks has suggested a "Psych" movie could happen at some point down the road.

"Oh, man, that would be so much fun," Lawson said about such an endeavor.

"He's been talking about that for a while," Omundson said. "I think the musical was sort of a taste of that, I think, of what we can do with the two-hour format. And I know Steve has a lot of stories left to tell for this group of misfit toys in Santa Barbara.

"I think everybody would be up for it."

"I definitely would," Lawson said. "I think it would be fun."

The "Psych" cast and crew are tight-knit, and wouldn't hesitate to join forces in the future.

When Omundson and Lawson were asked what they take away from a series that far exceeded everyone's expectations in terms of storytelling, longevity and impact on pop culture, he said, "I think it's each other."

"People have grown up watching this show, which is crazy," Omundson said. "That's the public thing. But then, for us, privately, we've also grown up together, and evolved as actors and artists and writers and directors. It's really been such a unique experience. You can't just turn your back on that."

"I know we'll all go on to other jobs and stuff, but what we have together is the most special thing."

"Psych" airs Wednesdays at 9 p.m. on USA. Find the show online at http://www.usanetwork.com/psych.