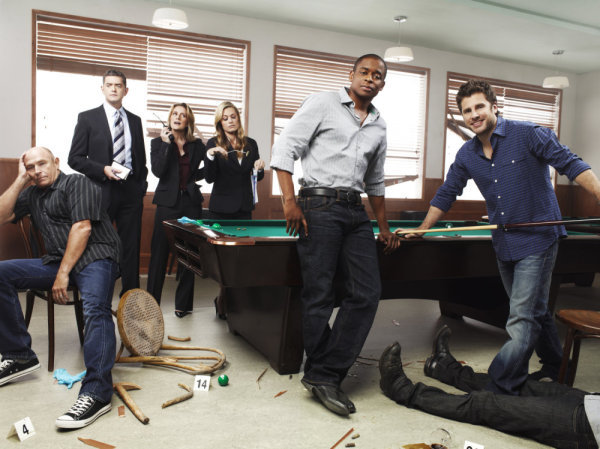 'Psych': Shawn and Juliet edging closer to a relationship (or so we think)

When a television show comes right out and says it's going to psych you out in the end, it's safe to assume a few "gotcha" moments will be thrown into each season.

Such is the case with "Psych," where, over the course of the series' first four seasons, writers dangled a possible Shawn/Juliet romance in front of fans.

Shawn Spencer is, of course, a pretend psychic, with incredibly in-tune powers of observation and a love for '80s films such as "The Breakfast Club" and "The Karate Kid." Juliet O'Hara, meanwhile, is a sensitive, straight-laced detective, and something of a romantic. In tandem with his best friend (Burton "Gus" Guster), and her partner (Detective Carlton Lassiter), the could-be couple solves crimes for the Santa Barbara Police Department.

Oftentimes, Shawn and Juliet are divided and work with their respective associates. But, when they're together, there is no denying their chemistry. Through loving looks, shared laughs, and occasional murders to solve, Shawn and Juliet have formed a bond the audience hopes will eventually turn into a romance.

"We've always said that the Shawn and Juliet development is all about Shawn being ready for Juliet, and we think he's getting really close," Franks says. "So there's going to be movement in all those directions this year. And I know we've dog paddled around it for quite a while, but we're going to stop the dog paddling and actually start floating slowly with the current."

After fending off scores of Shawn's semi-serious attempts to ask her out, Juliet turned the tables and asked him out at the end of season three. Somewhat shocked, he declined at the time, as he was technically on a date with his reunited high school crush, Abigail.

In season four, Shawn went back and forth with his feelings for both women, and almost made a play for Juliet when she was hospitalized. Though he held off, it was obvious he wanted to take their relationship to a different level.

Lawson says Shawn and Juliet will revisit their feelings in season five.

"I think we're going to get into it a little bit. ... Somewhere there's going to have to be some conversation about it. And I'm seeing, as the episodes are progressing, that we'll be seeing more of that now that some time has gone by and everything is settling back into its normal place.

"It's like, OK, there is kind of still a little bit of an elephant in the room when it comes to Shawn and Juliet and feelings that they've both expressed and everything else. So, I think we'll be seeing a bit more of recognizing that and dealing with it more this season."

The trick, Lawson says, is resolving all of the peripheral issues surrounding the two characters.

"I feel like the writers and producers have done a really good job," she says. "It's really, really, really tricky to keep this up for four or five seasons, this sort of dancing around what I guess some would call the inevitable. But it's not necessarily that. It's a really, really tricky place because of what we do, our characters, for a living, in that we work together.

"And Shawn has lied -- this entire time -- about who he really is. So, it opens a door to a whole bunch of stuff that they -- and that the audience, too -- would have to have respect for him, if he was in a relationship with somebody and having to come clean, and all of that.

"There's so many different dynamics that are touched on when it comes to putting our two characters together. And I feel like, so far, in that we've had other relationships and that we both recognize -- and they've done a good job I think of showing the characters, you know, sort of recognizing what they do, in that they work together, and how awkward that can be, and therefore they've sort of avoided it. And I think it's kind of nice, because it's built into a place that it will be avoided until it just can't anymore.

"And I don't know when that will be. But I feel like, you know, it may be soon. Or at least there has to be a conversation, or something."

While both Roday and Lawson have been pelted with the "will-they-or-won't-they" question for four-plus seasons, she says it's not a sore subject. In fact, she is excited to see what might happen.

"I think it would be interesting for all of us to play that dynamic if the characters get together," Lawson says. "But there's still some interesting emotional beats that we can play with them not being together yet, and sort of recognizing, as adults, how tough of a situation that could put them in. And I think that, sort of, will build up the tension. And I think it's really good to have that.

"So, it's ... exciting to sort of keep waiting to see exactly what that moment is going to be."

"Psych" airs Wednesdays at 10 p.m. on the USA Network. Visit the "Psych" homepage.