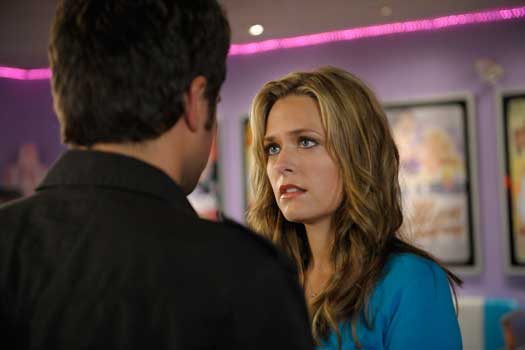 'Psych' adds romance to its alluring mix of comedy, mystery

Who turns Maggie Lawson down?

It just doesn't happen. She's the classic television beauty, and her character carries a gun!

But when Shawn Spencer (James Roday) brushed Juliet O'Hara (Lawson) away in the "Psych" season three finale, that wasn't the episode's most surprising moment. The fact that show writers actually teased us with the possibility of a romance, now that was unexpected.

"I was really excited, because I thought this was a really big step for them, and for the show," Lawson told "Behind the Screens." "This is a nice change. Because now that this is on the table, everything will change."

"Redefining that was exciting, just for a shift in the show," she said.

Truth be told, the third season of "Psych" was all about unexpected, exciting twists in the overall plot. The show, about a "psychic" detective, Shawn, and his partner, Burton "Gus" Guster (Dulé Hill), who aid the Santa Barbara police in solving cases, is known for its humor and spot-on pop-culture references. But, up until last year, it really wasn't known for any sort of romantic storylines.

"I think we took chances, and that can go either way," Lawson said. "But, if you don't do that, I think a show can become stale."

In the season finale, Shawn was told by Gus that his inability to commit would cost him in the long run. To prove his friend wrong, Shawn proceeded to call his high school crush, Abigail (Rachel Leigh Cook), and ask her out on a proper date. He had thought about such a course of action earlier in the season, but instead decided to hold out for Juliet.

Up until the season finale, Juliet had rebuffed Shawn's flirting, usually falling back on the "we work together" excuse.

But, in an unexpected moment, Juliet went to Shawn at the end of this episode and asked him out to dinner.

"I think there's something about him, that Juliet has always been just a little intrigued - perplexed, at times - just by who he is and what he does," Lawson said. "And, I think, you know, when he started with all of his flirtation and everything in season one, it was like 'We work together, we work together!' I think it's gone from a lot of eye rolling ... which, I think, Juliet had to play because she had to be a serious detective. But then, I think that has really evolved into a respect. I think she really, really, really respects who he is and what he does. Which, the season three finale sort of shows that.

Sensing the opportunity to start a relationship with Shawn was fleeing, Juliet "was like, 'I have to tell this person how I feel.' And, it did not go so well," Lawson said, laughing. "It did not go her way."

Roday had high praise for what Lawson brought to that scene, and for what it meant to their characters.

"It was - well the actress, Maggie Lawson, did such a wonderful job playing that scene that, you know, I watch it sort of as a fan of the show and, you know, and feel for her and feel for Shawn," Roday said. "But, you know, it's a marathon, that relationship. I think everybody kind of gets that, that you know, there's going to be a lot of going in circles and missed timing and hurdles that have to be cleared in order for something to ever actually happen.

"And, you know, next season, you know, Abigail, Rachel Leigh Cook's character, is one of those sort of curveballs. We'll be seeing her sporadically over the course of the entire season."

When Lawson read the script, and saw that Juliet had a change of heart about Shawn, she was surprised.

"I think I remember my first thought just being that it was so well-written. It really was such a beautiful scene that I actually teared up the first time that I read it. It's just, uh, it's heart-breaking."

"It's such a beautiful scene," she said.

Though Shawn and Juliet didn't get together, Lawson is happy with the direction the show's writers are taking with regard to the potential romance.

"I think it should go the way that it has been," she said. "Here's the thing: I think if Shawn and Juliet had gotten together, like in season one, and then they were like going back and forth and back in forth throughout all of these seasons, it would be one thing. But, the fact we're on season four, it's built up to something so big now, that you never know with the show. It really, really, really could go either way. So, I think we have to keep playing that as long as we possibly can. The sort of, the 'Will they or won't they?' question."

Of course, it's easier to back the writers when your show is experiencing a creative high. Season three of "Psych," with its newfound romantic element and even sharper wit, was the series' best to date.

"Well, for me, anyway, I kind of felt like season three was sort of a tale of two seasons really," Roday said. "I kind of felt like we heated up down the stretch on the backend there especially. And that makes it a little easier to keep up the momentum, because I kind of felt like we were riding a high going into the hiatus and with, you know, the last batch of episodes that we had shot, and everybody was feeling confident and good and didn't want to stop."

"We've sort of established the formula for 'Psych,' and what 'Psych' is. I think there are a lot of shows that don't do this," she said. "I think we took a chance in really exploring our characters, and maybe taking a bit of a different route. There were episodes that had more action; there were episodes that had more emotion. We got into Shawn's life a little bit; we got into his past a little bit ... and who our characters are as people, as well.

"And I think the writers, I think the cast - I think everybody - just sort of hit it out of the park in season three. ... I think our writers are riding a high."

Lawson said season four, which begins Friday, will continue to explore each character in greater depth.

"I'm so excited for season four to premiere because there's just so much going on," Lawson said. "We got into (actor Timothy Omundson's Detective) Lassiter's life a little bit last year, but we're getting into Lassiter's life and his past a bit. We're getting into Gus' past a bit. We're still on Shawn's past - he's in a relationship now. Juliet's past; we meet her brother ... and maybe, maybe (she'll find) a lover? So, we're getting into all these different little corners and figuring out who we all are as people, and I think that's really great.

"And, on top of that, the emotion and the action and everything else has sort of just been upped; like everything has been upped another 20 percent than what is was last year."

In the fourth season premiere, Shawn and Gus track a Thomas Crown-like thief - portrayed with zest by Cary Elwes - into British Columbia, Canada. Shawn and Juliet, meanwhile, try to sort through their feelings while continuing to work together.

"It's been really interesting, you, know, going into season four and having Shawn and Juliet have to, you know, they have to have a new approach to their relationship because he's with someone," Lawson said.

Roday said the new season "is mostly about the challenge of maintaining what we achieved down the stretch last season, when it all started to sort of work on all cylinders."