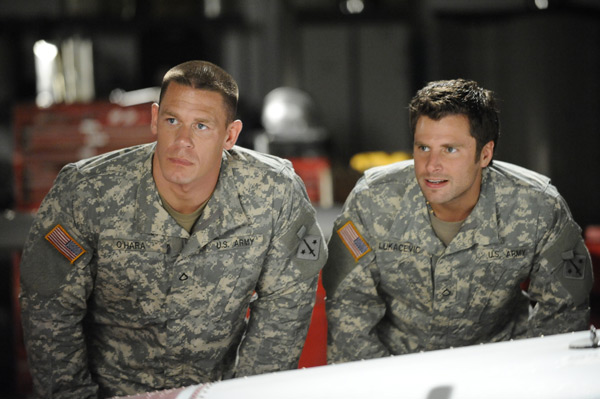 'Psych' gets 'Raw' in second half of season

"Psych" creator and executive producer Steve Franks has mastered pop culture, brilliantly re-imagined cult '80s lines, and marvelously merged action, comedy and romance into his hit USA Network series. So, to up the ante for the second half of season four, he's set his sights on something much larger, stronger and even more theatrical: professional wrestling.

"We're starting off doing a military episode, and we've landed our dream guest star: That's John Cena from (World Wrestling Entertainment). We've been trying to do that since season one. We actually had a wrestling idea. We're really excited," he tells "BTS."

In the mid-season premiere, titled "You Can't Handle This Episode," Santa Barbara Police Department psychic detective Shawn Spencer (James Roday) takes on the army when he discovers a private's suicide was murder. In the process, he tangles with a military mercenary - the WWE's Cena.

"Just because of the relationship with (USA), I've seen bits and pieces (of ‘Psych'). I've never been involved and dedicated for the seasons and everything, but really kind of saw that it was my sense of humor. And definitely when I got on set I knew I would fit right in," Cena tells "BTS." "The show's very well written and it's very ... those guys certainly (distinguish) themselves ... with their personality. I love how it's put together.

"I wasn't a die-hard fan, but have since become one. I really do like what they're doing with the show, and I'm happy that I can help kick off the new season, the new time slot. But it was it was an educational experience, (and) one that I certainly, I made some new friends and certainly had a newfound respect for what those guys (do)."

Two days prior to the "Psych" premiere, Roday and co-star Dulé Hill (Gus) will host the WWE's "Monday Night Raw" (9 p.m., USA). As they did on set, Cena expects his co-stars will represent themselves and the sport well when they enter the squared-circle.

"I'll tell you what, Dulé's energy is second to none, and James, believe it or not, whether you're going to get him to admit this online (or on) the phone, is one of the biggest closet wrestling fans I have ever come across in my life," Cena says. "There are many intricate professional wrestling references in the kick-off ‘Psych' episode. It was a pleasure to see, and those guys paid homage to the sport and to the industry fantastically well with their clever way of writing material."

"It is just because, you know, to be able to sort of rub shoulders with these guys and get a sense of their culture after being a fan for so many years ... it's a bizarre dream; (a) childhood dream come to life," he says. "And I can't imagine a better catalyst for all of that than John, just because, you know, not only is he bigger than life in the ring, he's bigger than life outside the ring. And he's ... so genuine, and he's so grounded, and he was so happy to be with us - which is why, you know for us, it was an absolute no-brainer to go be with him."

Though "Psych" left on a more serious note - Shawn was shot and kidnapped in the mid-season finale - Franks says the show is returning to its comedic roots.

"I finally realize my dream to do a ‘Jaws' episode, so we're doing an episode with a shark attack," Franks says of upcoming spoofs. "We're doing an ‘Outbreak' episode. We've always wanted to do something fun with that. Of course, what's more fun than a deadly virus on the loose?"

"For me, it's always been each episode is a little movie - a little summer movie - and we're continuing that," he says. "Each episode probably couldn't be more different than the last one, and that's the way we like it - until we run out of worlds."

Though fans can rest assured of Shawn's present condition - he's not about to stop poking fun at Gus, cracking on Lassiter, or harboring a dude-crush on Judd Nelson (who, coincidentally, guest stars later this season) - Roday says the shooting will have some effect on his character.

"(It's a) two-sided coin. On the one hand, I think Shawn getting shot woke him up with a glass of water to the face that was his own mortality. On the other hand, he got through those rather extraordinary circumstances while nursing a gunshot wound ... so he might think he's the Terminator now," he says. "Seriously though, I think that experience, along with several others that we have coming down the pipe and on tap for the future, all sort of point towards Shawn growing up.