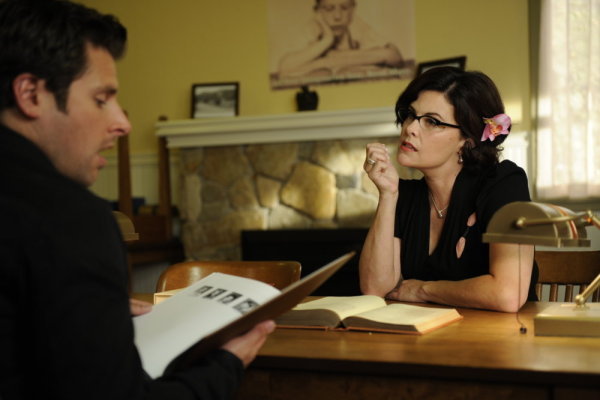 For the better part of five seasons now, James Roday and the cast and crew behind the USA Network's hit series "Psych" have thrilled fans with nods to the best pop culture moments of the past 25 years. From "Jaws" to "The Breakfast Club," the WWE to kung fu movies, "Psych" has effortlessly woven references -- and guest stars galore -- into its regular storylines.

Now, Roday, who stars as "psychic" detective Shawn Spencer, is taking viewers on a psychological journey so mysterious, so suspenseful, it could only take place ... at a cinnamon festival.

"It was crazy," Roday said of filming with actors from his favorite TV show. "I was like -- you know, I think there are ‘Twin Peaks,' like, fan boys out there who actually go to sleep and dream about what I got to do. It was remarkable."

For Lee, who played the iconic Laura Palmer, the experience "was such an incredible gift that James and everyone that's a part of ‘Psych' gave us, because some of us hadn't seen each other from ‘Twin Peaks' in years and years.

Roday agreed, saying, "It was like three experiences in one. It was -- you know, it was them getting to see each other for the first time after all these years, and us getting to watch them. And they were getting emotional, which made us emotional. And then, you know, on top of everything, it was the closest I'll ever come to being in an episode of my favorite show; so it was ridiculous.

"Only in our line of work do we get to do things like this and call it work."

"It's kind of compacted, this little second half we have, so you know, we're just kind of -- we're blowing it out. ... We have a holiday episode coming up. We took a year off last year and didn't do a Christmas episode, and we came back with one this year, and it's pretty wild. It's kind of like ‘It's a Wonderful Life' on acid. Shawn gets a glimpse into what everyone's lives would be like if he had never come back to Santa Barbara ... and we did some pretty crazy stuff there.

"Ralph Macchio swung in and did a very funny episode that was sort of us ripping on ‘Police Academy.' And then, we close up shop with the finale of the Yin Yang serial killer trilogy, which I thought came together pretty nicely. Ally Sheedy's back. Jimmi Simpson's back, which is a testament to our writing staff for being able to come up with a way to bring back a character that's dead. And Mena Suvari came up and she was fantastic. And all questions are answered and everything comes out in the wash.

"So even though it's a short season, I feel like it's pretty packed with goodness, with richness, stuff that smells of deep, rich mahogany."

For Roday, however, nothing will top his "Twin Peaks" moment.

" ‘Twin Peaks' ... for me is, you know, I hate to throw around profundities, but I -- it's easily the most proud I've ever been of any of our achievements on the show," he said. "So, it's hard to even like sort of look past that one. It's just like, ‘This is it. This is what we're doing.' "