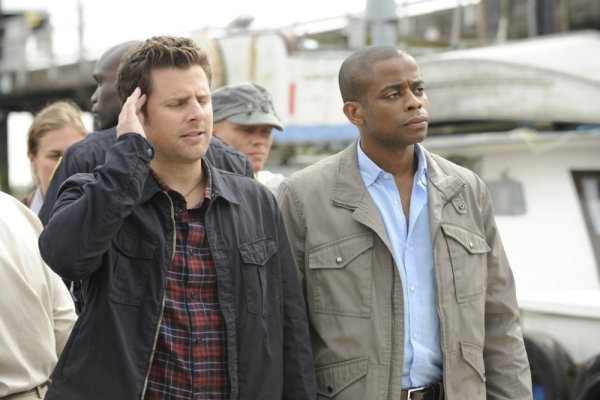 From sharks to kung fu masters, serial killers to deadly viruses, Shawn and Gus have been through a lot in four-plus seasons of "Psych." Now, the dynamic duo is about to face something even scarier: Their future.

In what will be a "Psych" instant classic, William Devane and Carl Weathers guest star in tonight's episode as types or shadows of Shawn (James Roday) and Gus (Dulé Hill).

"The truth is, they sort of -- they're a team. We're a team. We, in a very unlikely series of events, have to end up sort becoming a foursome, as opposed to two twosomes, in order to solve a heinous crime that affected one of Santa Barbara's most respected pillars of society, whom they have a history with and everybody is fond of," Roday said. "And it basically just, you know, without being like really on the nose, it's kind of like this, you know, this glimpse into Shawn and Gus's fairly distant future, and we just had a -- we just had a blast with those guys. They each brought their own little thing to the roles and the script was very funny.

"I've got to give my boy Todd Harvan a shout. He wrote a very funny script and these guys came in and knocked it out of the park."

"They're so funny. They are so funny," she said of the Weathers-Devane combo. "I love the two of them together.

"I actually know Bill Devane; we did a series together. So, it's been awesome to have them up here and to work with him again. He's so funny (and) they're so great together.

"Psych" airs at 10 p.m. on the USA Network. Click here to visit the show online.