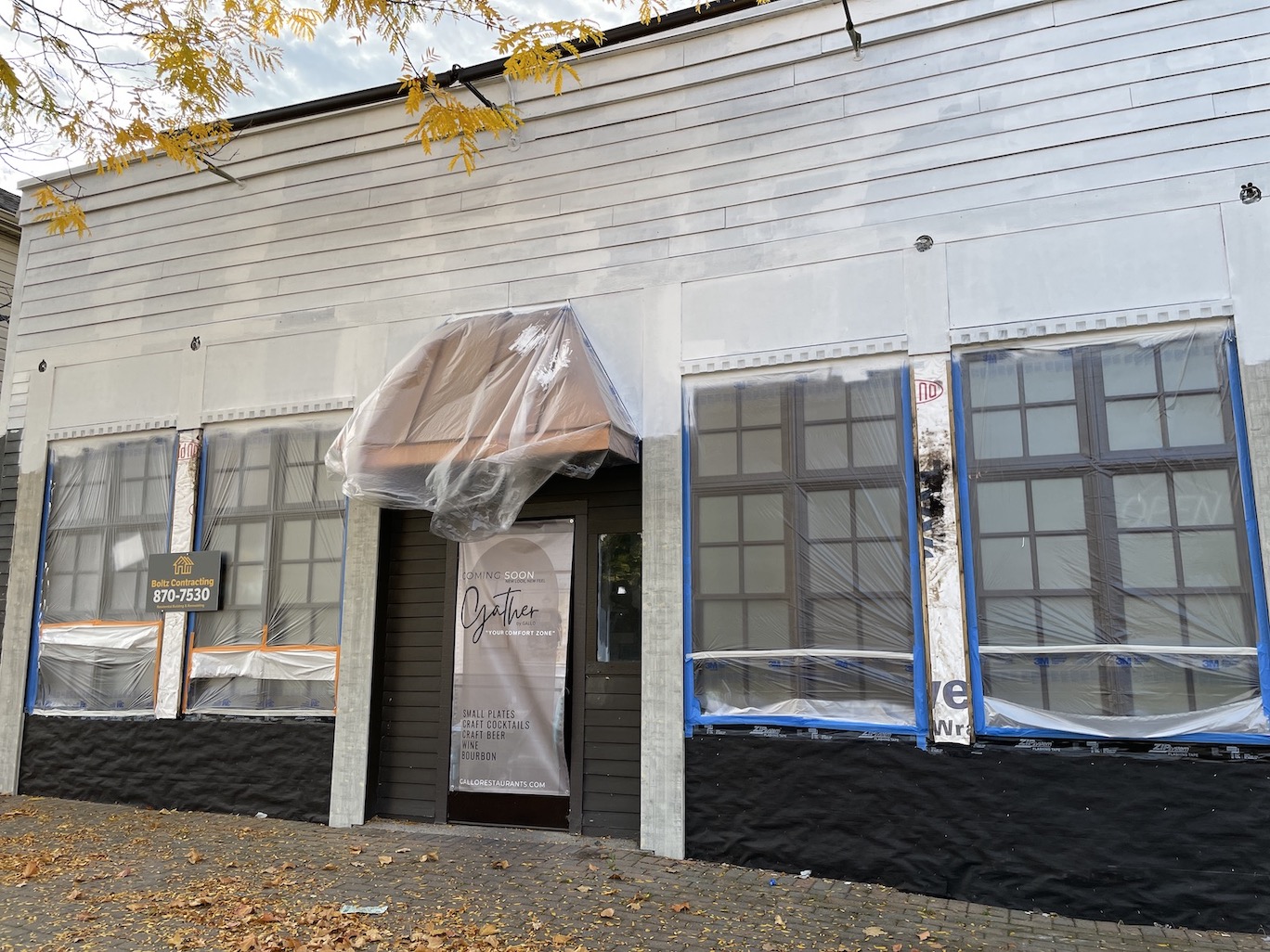 Renovations are underway at Gather American Eatery on Center Street.

Outside, “We’re replacing from ground level, up three foot – it's all going to be brick,” Hibbard said. “So, like a more modern look. And then we're repainting the whole exterior, and putting all-new light fixtures in. Just a more-modern, updated look.”

“All the windows on the outside, they’re being opened up – kind of more like Gallo – so it's like an indoor/outdoor space,” he said. “That's a major change, too. In the summertime, it's going to look and feel totally different.”

Inside, “We're actually doing more,” Hibbard explained. “There was like a wall that separated the dining room and the bar. We took that wall out. We’re redoing the bar. The bar is going to look totally different. New countertops, new façade, new flooring. The whole building will have new flooring. Upgraded paint. It'll be more of like a bar atmosphere, with small plates.”

Despite the volume of work taking place, Hibbard said he hopes to reopen Gather by Gallo by the end of this year – “But it all hinges on construction,” he said.

Hibbard did note, “We're ahead of what we thought we would be.”

The restaurateur received a façade grant from Niagara County. More than that, however, “What changed for us is we purchased the building,” Hibbard said. “Before, we were renting it from the previous owner – who was great. I can't speak enough good things about him – he was great during the pandemic, and really helped us out. He approached us; asked if we wanted to purchase the building; and it was just the right place at the right time, and the numbers worked. So, when we decided that we could purchase the building, that's when we decided to pretty much close and start the renovations. ...

“It needed to be updated, and just a little bit more modernized, and I feel like, with changing it up to be more of a bar with small plates, I think it needed an updated look.” 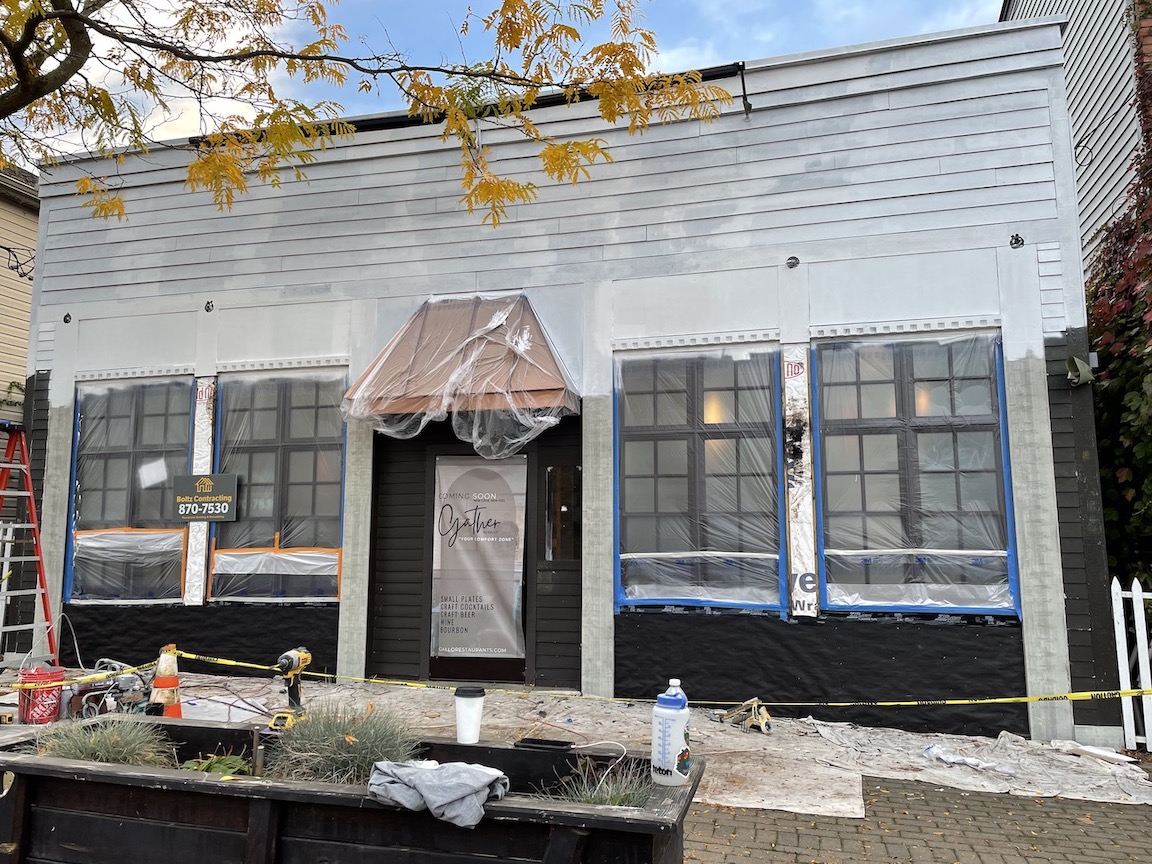 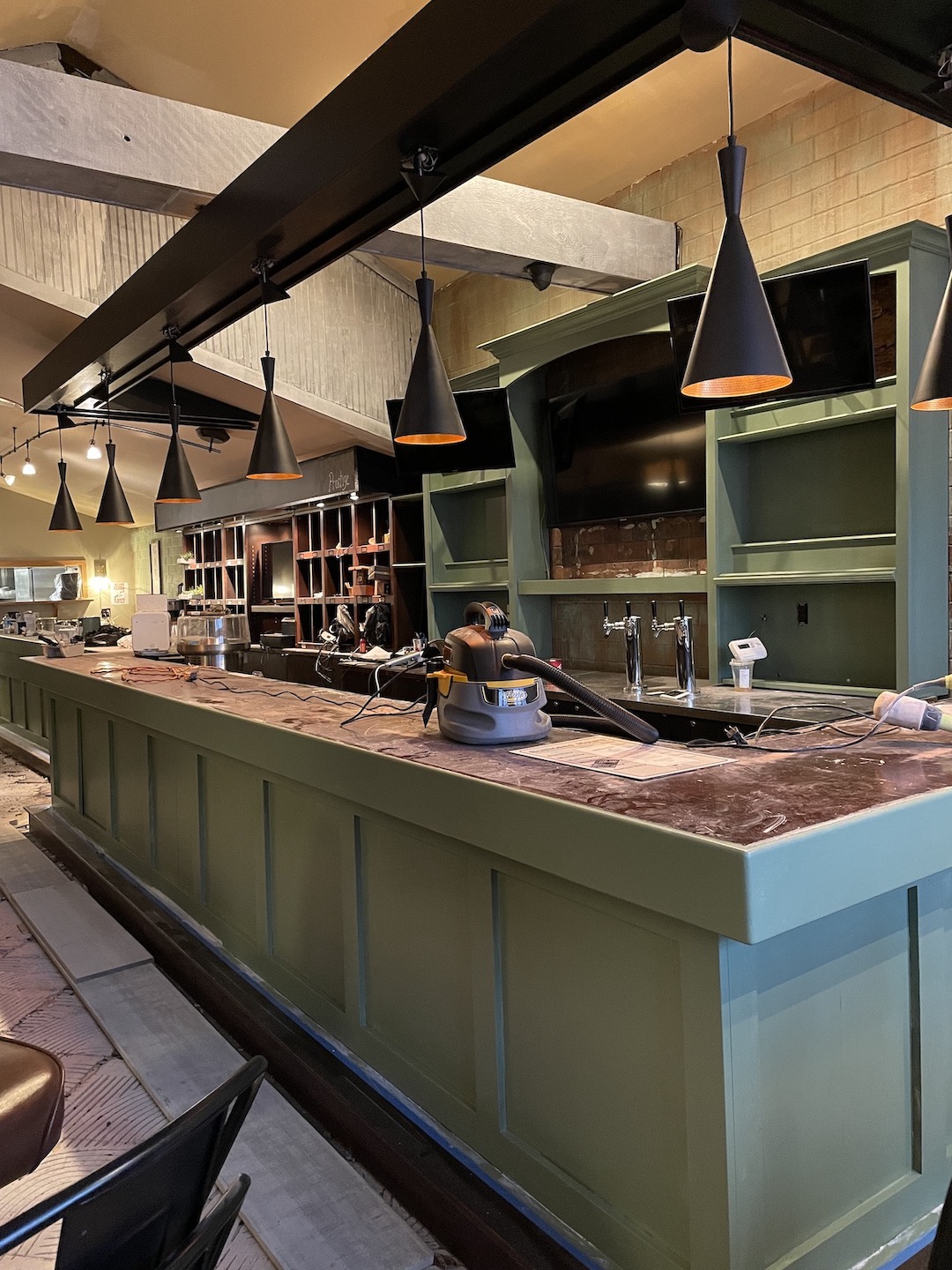 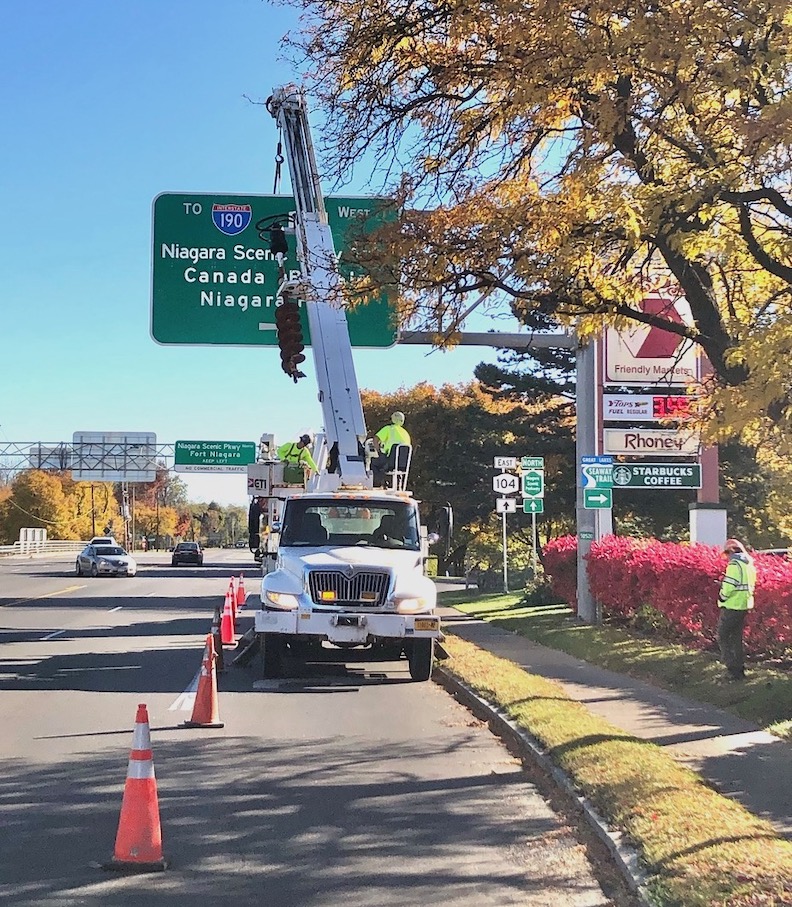 A large New York State directional sign was removed earlier week at the foot of the Niagara Scenic Parkway. (Courtesy of the De-Sign Committee)

•On Monday, the Lewiston De-Sign Committee announced the large sign near the Niagara Scenic Parkway entrance was removed by the New York State Department of Transportation. (Read the full story here.)

The committee said the sign, which stood at the intersection for over 60 years, was “too big, unnecessary and contrary to the historic character of the village. The removal follows the deconstruction of another large sign, next to the Lewiston Chamber of Commerce office, which was taken down several months ago.”

Organizer Lee Simonson said, “We would like to thank Mayor Welch for inviting us to join her at a planning meeting at the DOT offices in Buffalo a couple of years ago. We stated our case, and DOT was very cooperative in helping us achieve our goals. There is a lot of work left to do, but we are making significant progress” in removing signs. 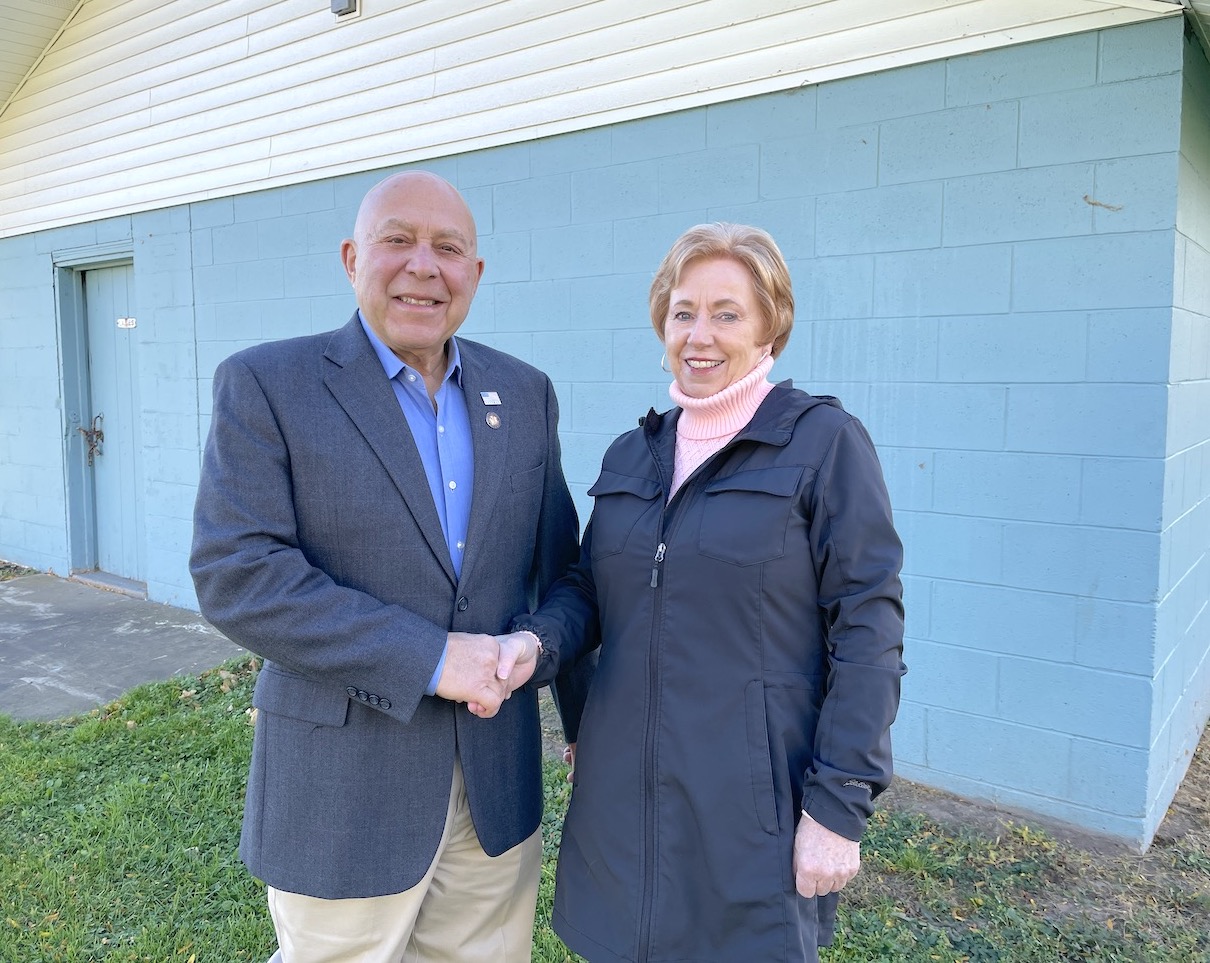 Work there included a new roof and new paint.

“New York state recently completed a bike trail from the Niagara Scenic Parkway, which terminated at Seneca and North Ninth Street in the Village of Lewiston,” Welch said. “The continuation of the trail along North Ninth Street, through Academy Park, will offer restroom facilities and a bike repair station, and is adjacent to the Chamber of Commerce/Welcome Center, creating a hub for trail users. This upgrade of the Academy Park restroom will accommodate park users and bikers on the Greenway Trail.

“We are very grateful for the support and assistance of Assemblyman Angelo Morinello in securing $50,000 in funding through New York State Department of Transportation for the restoration and remodeling of the Academy Park restroom.” 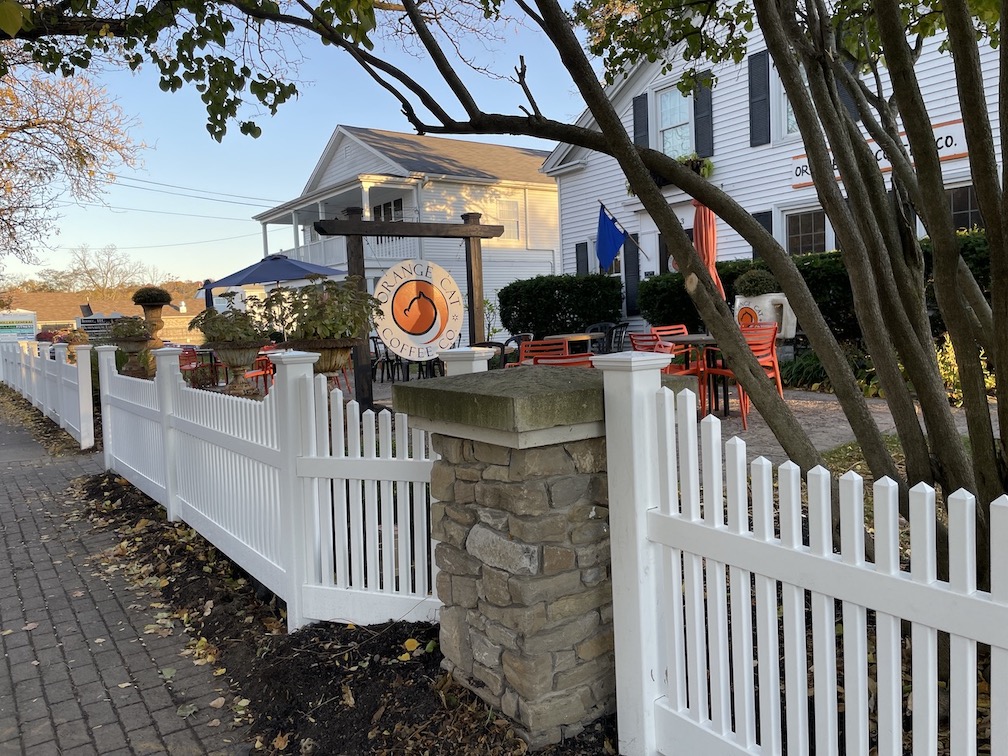 Fence replacement moved this week to the areas in front of the Orange Cat Coffee Co. 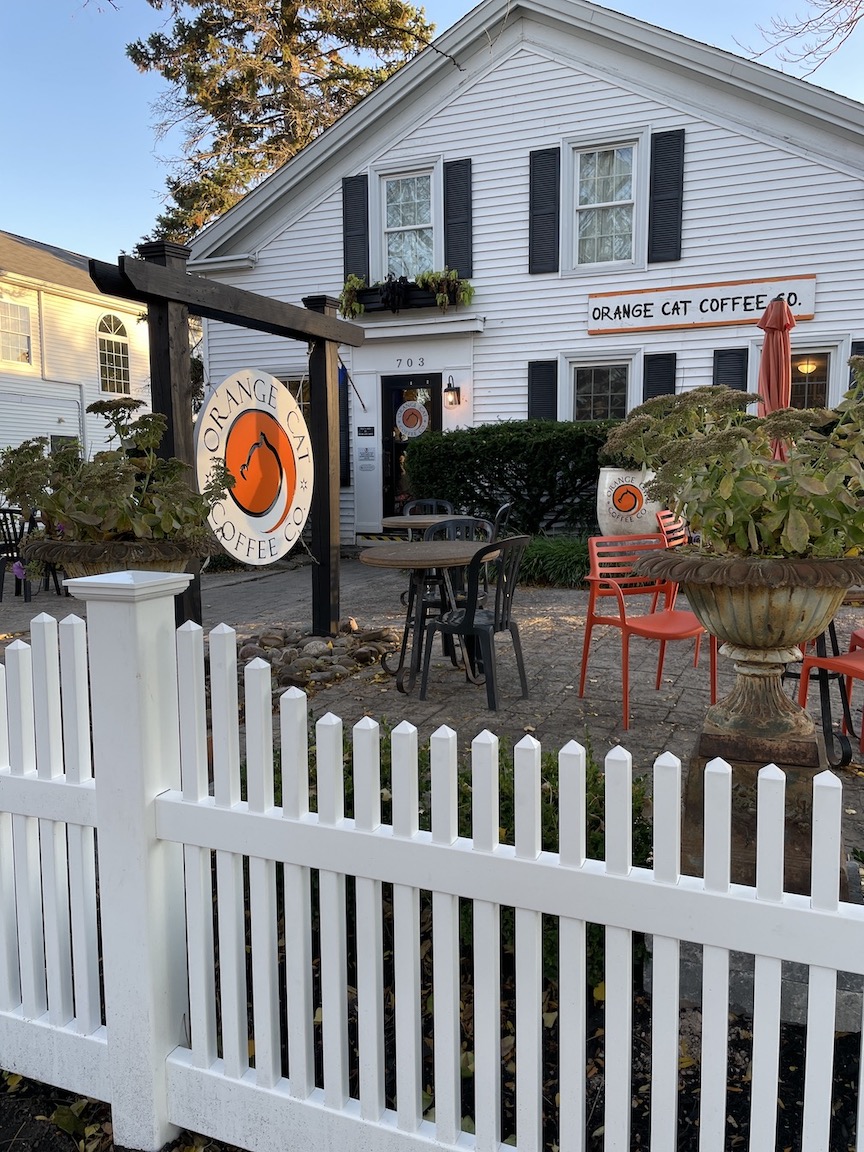 •Fox Fence continues to install new white, picket fencing along Center Street. (Read the full story here.) A month ago, the Village of Lewiston Board of Trustees voted to spend $94,486 on this project, noting some fenced areas were broken and said to be beyond repair, while others had missing posts.

Welch said, “We’ve run out of fences. And the ones that we have left are so deteriorated.”

Residents Tasia Fitzpatrick (a member of the Planning and Beautification commissions) and Susan Hofert (an Historic Preservation Commission member) are overseeing the fence replacement project.

In September, Fitzpatrick said, “We know this is part of the charm (of the village). At Christmas, we hang our wreaths. There’s fewer places to hang them now, of course, because there’s nothing left to hang them on. They’re falling apart; they can’t be repaired.”

Hofert added, “Wherever there was, there will be again. New fencing will extend down the south side of Center Street from Academy Park to the home of the late Bruce Sutherland at 605 Center (excluding the metal fencing in front of the CVS and Rite Aid plazas); and to Stevens & Lewiston Insurance on the north side of the road.

Fitzpatrick said, “(Fox Fence) told me they feel confident – not 100%, but confident – they would have it (completed) by Nov. 12, in time for Christmas this year.”