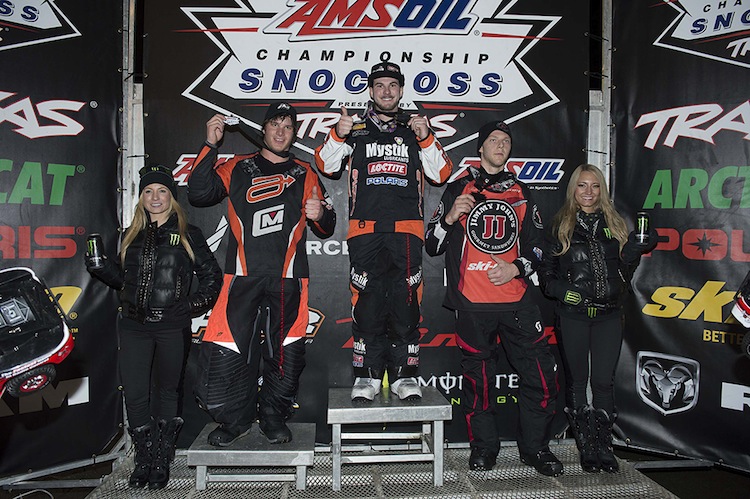 Western New York's snowmobile-friendly atmosphere lent itself to an even larger crowd on Saturday for the Seneca Allegany Air Force Snocross round of AMSOIL Championship Snocross, presented by Traxxas and hosted by Seneca Allegany Casino. Thousands upon thousands of snowmobile racing fans spilled out from the packed grandstands and lined the sides of the wide oval track and climbed up into the nearby mountainside to watch the world's top snocross racers put it on the line at round 12 of the 16-round series.

Two familiar faces would grace the top rung on the podium again at Seneca Allegany Casino as Tucker Hibbert (Monster Energy/Arctic Cat) and Jake Scott (Mystik Lubricants/Loctite/Polaris) completed their sweeps of the Pro Open and Pro Lite class races, respectively, and added to their leads atop the overall point standing in each of the classes.

When the start light flashed green to open the Pro Open main event at Seneca Allegany Casino, it was, for the second night in a row, Kyle Pallin (Mystik Lubricants/Loctite/Polaris) who nailed the Stud Boy Holeshot. And nearly getting bounced out of the first turn - from his No. 1 qualifying spot and gate pick - was Hibbert, who managed to hold things together and got out of the first turn in fourth place.

Pallin's lead would again be short-lived as Ross Martin (DuPont/Jack Links/Polaris) blasted up front as the green flag flew on lap two of the 24-lap contest. But what looked to be a race that was shaping up between Hibbert and Martin soon turned into another clinic as Hibbert cracked the throttle and, in one fell swoop, launched past both Pallin and Martin on an outside line through the rhythm section and into the lead - a lead he'd never relinquish.

"That was another wild ride. The track's demanding and the pace was unreal," said Hibbert. "But I'm pumped to be up here again ... it was a great weekend for us."

With Hibbert checking out, the battle for the final Pro Open podium spots got interesting quick. Defending Pro Open champ Tim Tremblay (Scheuring Speed Sports/Rockstar/Ski-Doo) had been flying all day, and by lap seven he was up to fourth place and pressuring Pallin. At the race's midway point (lap 12), Hibbert was up by eight seconds on Martin, and Kody Kamm (Polaris/Monster Energy/Hentges Racing) had moved up to fifth.

By lap 17, Tremblay had since got by Pallin and was closing on Martin - who he passed with seeming ease as it appeared Martin began to slow in the later stages of the race. Pallin would then pressure Martin for third, but went down in his effort between turns three and four. Martin slowed even further - running a 40-second lap late in the race when 25- to 26-second laps had been the norm. Kamm would also pass Martin, as well, and made the final podium spot, with Tremblay in second for his second podium finish of the weekend.

"The first couple of laps, it got crazy rough," said Kamm. "But I capitalized on whoever fell off (Pallin) on the back part of the course when they were battling for second and third - and I was able to get up here."

Added Tremblay: "It was a good race. I worked my way up to second place. The roost got really bad there at the end, but it was a good race overall. The fans from New York here were great."

With the win, Hibbert increased his Pro Open championship points lead to 73 points over Tremblay (489-425).

Overcoming a high speed get-off that left him limping off the track in an afternoon qualifying race, Jake Scott again proved his mettle in front of his hometown fans, pulling another spectacular start out of the bag to open Saturday's Pro Lite final at Seneca Allegany Casino, then riding a near perfect race to the checkers to complete the weekend sweep.

Scott, in his pursuit of his first overall Pro Lite championship, would also get another boost in the points as David Joanis (Royal Distributing/Ski-Doo), who was tied in points with Scott heading into the weekend's racing, was black flagged for what ISOC officials deemed "overly aggressive riding" in the Pro Lite main when Joanis collided with New York racer Corin Todd (Polaris) and knocked Todd off his sled. This would prove to be a huge blow to Joanis' championship hopes.

"He (Joanis) was riding too aggressively and clearly took Todd out," said ISOC's Carl Schubitzke, president of racing and operations, on the black flag on Joanis.

With the potential second- (Todd) and third- (Joanis) place finishers now out of the running for the podium spots behind Scott, Andrew Carlson (Polaris/Carlson Motorsports) and Renaud Alexandre (BOSS Racing/Jimmy John's/Ski-Doo) would each move up a couple notches and round out the podium in the crazy Saturday Pro Lite main event at Seneca Allegany Casino.

With the victory and Joanis' subsequent black flag, Scott takes a 19-point lead in the Pro Lite overall championship points chase to the penultimate round of AMSOIL Championship Snocross - the Ram Pro National - at Buffalo River Race Park outside Fargo, N.D.

Next up: Round seven of AMSOIL Championship Snocross, presented by Traxxas, at Buffalo River Race Park outside Fargo, N.D., March 8-9.