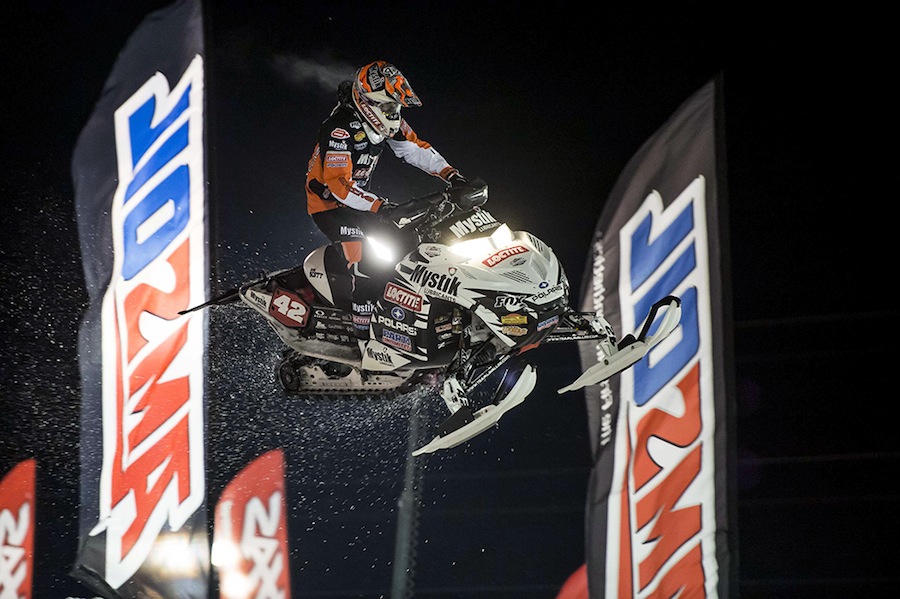 Jake Scott explodes out of the back row in the Pro Lites and re-takes o/a points lead with win; Tucker Hibbert makes it eight wins in 11 starts

With thousands of fans pouring out of the packed grandstands and lining the hill adjacent to the AMSOIL Championship Snocross track at Seneca Allegany Casino, the stage was set for a couple powerful Pro class main events at the inaugural running of the Seneca Allegany Air Force Snocross on Friday.

In the premier Pro Open main event, Tucker Hibbert (Monster Energy/Arctic Cat) overcame a sub-par qualifying effort (5th) to again dominate the night's final race, taking the lead from rival Ross Martin (DuPont/Jack Links/Polaris) early and cruising unchallenged to victory. And in the support Pro Lite class main event, Jake Scott (Mystik Lubricants/Loctite/Polaris) put up one of the best efforts of the year in that class, nearly pulling the holeshot from a second row start, grabbing the lead early and running away with the win much like Hibbert did.

Rocketing out of the gate in the night's final contest, Kyle Pallin (Mystik Lubricants/Loctite/Polaris) pulled the Stud Boy Holeshot, but was quickly caught by the No. 1 qualifier Martin. With the fifth gate pick, Hibbert ran the risk of getting caught up at the start and forced back to mid-pack. But a fourth place start would dash the hopes of those wanting to see Hibbert make one of his classic runs through the pack as, before you could say "Lap Two," Hibbert was already past Polaris' Justin Broberg and Pallin and into second place - roughly 4.3 second back of Martin.

With a clear track and no lappers in site, Martin clicked off a 25.852 to Hibbert's 26.857 lap time on lap four. And for a brief moment it looked like we might have a race. But on lap six, Hibbert would take advantage of Martin checking up just briefly off a jump landing, dove to the inside and was gone - just like that.

"We've got to catch that son-of-a-gun," Martin would say from his spot on the second rung of the podium after the race.

Hibbert rode another perfect race. He seemed to use lapped professional riders on 450-pound sleds as ski gates, weaving in and out of the traffic with such ease that Martin and the others chasing him could never make up any time. By the last lap, where Hibbert finally slowed his pace just enough to look over his shoulder and see who was around, he still had more than a 10-second lead on second-place Martin.

"Felt really good tonight. Ross got out to a great start and was doing a step-up (jump) on the back of the track that I really didn't want to do," said Hibbert, the overall Pro Open point leader. "But I ended up stepping up and doing it. It was a great race tonight ... can't wait for tomorrow's race."

"I didn't have such a great start, then wasn't paying attention later in the race and was running wide," said Tremblay, who qualified eighth for Saturday's Pro Open main. "Then I saw Kamm coming on hard and thought to myself 'I've just got to make the podium.'"

A spectacular start from the back row by Pro Lite points leader Jake Scott would be the highlight of Friday's Pro Lite main event at Seneca Allegany Casino. Scott railed to a second-place position after the third turn, then soon parlayed that amazing start to the race lead over Andrew Carlson (Polaris/Carlson Motorsports) and brought 'er home to the checkers.

"I can't believe it!" said Scott of his start. "I would have been pumped with a top seven start. I honestly can't tell you how I ended up winning from the back row. With all my family and friends here from New York, I just had to show them something!"

Scott ran fast and flawless, opening up a 6.5 second lead through lap 11. Running into some lapped traffic would be the only hiccup in his effort when he changed up his line through the rhythm section, got bucked sideways and was nearly pitched off his sled. But Scott reeled it back in and ran clean through the last five laps of the 16-lap main for the win.

Tied with Scott in the overall points chase heading into Saturday's Pro Lite final was David Joanis (Royal Distributing/Ski-Doo). Qualifying fifth (to Scott's 11th), Joanis got a solid start, but was soon clipped by another rider and nearly left his sled. But he would rally back to sixth by the midway point of the race, then began picking off the top Pro Lite guys until finally passing Carlson for third and some highly important series points.

"I got a great start, then somebody cut me off. After that I made a charge and am glad to be up here," said Joanis. "But hat's off to these two (Scott and second-place Travis Muller). They rode awesome."

Muller (NSK/Foremost Insurance/Ski-Doo), who qualified in third, got out of the start in third place and moved into second past Carlson on lap seven. Trailing Scott by 5.5 seconds at that point of the race, Muller wasn't able to make up the distance to challenge Scott - but he didn't give up any time to the hard-charging Joanis either.

"Good track tonight that was nice and wide, made for some good racing," added Muller.

With the victory Scott took the Pro Lite points lead back from Joanis. Through 11 rounds Scott leads Joanis by a score of 396-394.