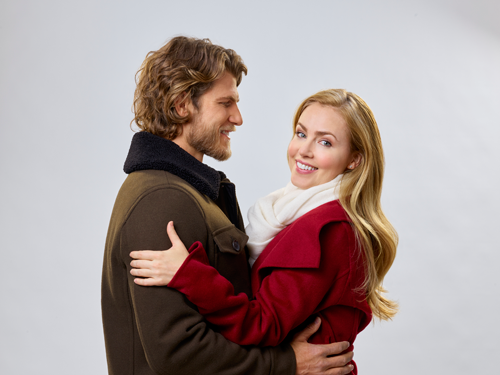 With the kids jingle-belling and everyone telling you be of good cheer, well, it’s the most Hallmark time of the year.

A “who’s who” in the entertainment industry can be found acting in holiday films playing around-the-clock on the Hallmark family of channels.

For those who’ve chatted with BTS (including Jewel, Shantel VanSanten, Maggie Lawson and Rachael Leigh Cook)  the opportunity to work with the Crown Media team – second to none, when it comes to Santa Clausing – is often a welcome change of pace.

That was the case for Amanda Schull, who stars in Sunday’s “Project Christmas Wish.” Following the birth of her son – not to mention juggling two intense, and wildly different cable dramas in “12 Monkeys” and “Suits” – she was happy to trade in her “save the world, or else” characters for someone a little more into parties for hosting, marshmallows for toasting, and caroling out in the snow.

In “Project Christmas Wish,” Lucy (Schull) appears on her small town’s radio station each Christmas season looking for a special wish to grant. This time around, the community points her to Lucas (Travis Van Winkle), who is still struggling with the loss of his wife. Happy memories have been in short supply for him and his daughter, Max (Averie Peters), making Lucas a perfect foil for Lucy – Santa’s favorite elf.

Still, she agrees to take on Max for her “Wish of the Season.” In dealing with Lucas, Lucy starts to realize the fulfillment of her own dreams might just be in play, too.

Since making her on-screen debut as Jody Sawyer in the 2000 ballet drama/romance “Center Stage,” Schull has worked with body-morphing Wesen on “Grimm,” a psychic detective on “Psych,” cops and robbers on “Murder in the First,” and those darn “Pretty Little Liars.” She brought a boost to “Suits” following the departure of stars Patrick J. Adams and Meghan Markle (yes, that Megan Markle) – while also fighting an apocalyptic virus (no, not that one), and gun-toting, time-stealing world-enders on “12 Monkeys.”

In real life, Schull is charming, caring and funny – all ideal traits for a Hallmark film. Having demonstrated those personality pluses in Hallmark’s “Love, Once and Always,” it was a no-brainer for Crown Media to bring her back for another feature opportunity. 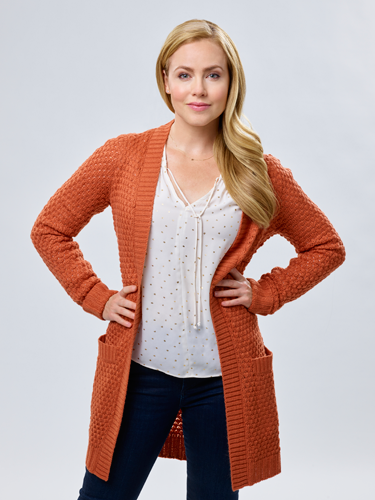 The first thing I’ve got to ask you about: Obviously, it's a pandemic, which is stressful. You have an almost 10-month-old child – which is wonderful and congratulations – but also is stressful, I'm sure. And it's the holidays, which is stressful. And yet I'm looking at you on TV this morning, and seeing how poised you are – and even your dog was chill. You just look like you're crushing this pandemic right now. I look like I've been living in a cave for about eight months. What is your secret?

Amanda Schull: First of all, I don't know who paid you off, but I really, really appreciate that. Thank you very much for all the kind words. I did my best to get the lighting right, and make sure that everyone was occupied and quiet, behaving themselves for those 45 minutes that I was on camera. So, thank you (laughs).

Q: I love the Hallmark movies. To a person, everyone that I talk to who works with Hallmark loves the experience. You and I have talked about your work in the past with Hallmark. What attracted you to this particular story?

Amanda Schull: I think this one in particular – for the reasons you mentioned earlier, it being a pandemic, having a child, all of those things – they lend themselves to just joy, which is, in particular, a Hallmark Christmas movie.

I was so excited when this script came my way for a number of reasons, not least of which is Joie (Botkin), who penned the script. It's funny, and playful, and yet it still has a little bit of bite, and a little bit of real-life pains, I guess I can say; a little bit of hurt underneath a lot of the cheery facade, which I thought it was really interesting and I really enjoyed that.

But then, in addition, it was just really nice to have my first job after having my baby be something that made me so happy. I didn't have to dig into wells of pain and be emotionally distressed at work. I was happy. I got to FaceTime him during lunch. It was just a beautiful coming back. And then, of course, getting to work this year, at all, was a really nice treat for me.

Q: Your character is in the wish-making business.

Amanda Schull: She is.

Q: As you said, there's a little bit of – there are certainly some heavier sort of themes to this, too – but also some light sarcasm and some great banter with you and your costars. Tell me a little bit about this character.

Amanda Schull: She, basically, is filled with a Christmas spirit year-round. But when Dec. 1 hits, it is go time for Lucy. She, for lack of a better analogy, she's kind of a little bit of a Santa to her little community. She, like you said, runs Project Christmas Wish, and is in the wish-making business – however, I don't know how much of a business it is; I don't think there's a lot of payoff for her. Monetarily, I should say. It’s all spiritual and heart-fulfilling. But she runs Project Christmas Wish, and does her best to grant every single wish that comes across her way, because that – as we find out – is something that is so dear to her on a very personal level; and it's so satisfying for her to get to do that. Not just because she likes making people happy, but because the town, the community – for her – is so deeply important.

Q: It looks like you have some real nice rapport with Travis. Tell me about working with him; and I believe your young costar’s name is Averie. What was it like working with the two of them?

Amanda Schull: It's funny because Travis, off camera, is very close in many ways to his character – with the exception that Travis, off camera, has maybe 30 times the amount of energy and smiles and laughs and, like, just buoyancy; he just sort of floats. He is a very happy, fun guy.

And then of course you pair that with this adorable child and the two of them were like thick as thieves. I mean, the casting couldn't have possibly done a better job. They were so delightful together, off camera, which I think translated on camera. And so that was really fun, because they had already developed this chemistry by the time I had my first scenes with them.

How good is Averie?!? That was her first movie. She was impressive – and not just her acting prowess, but also … that girl was more professional than many people I've worked with. She was absolutely fantastic. 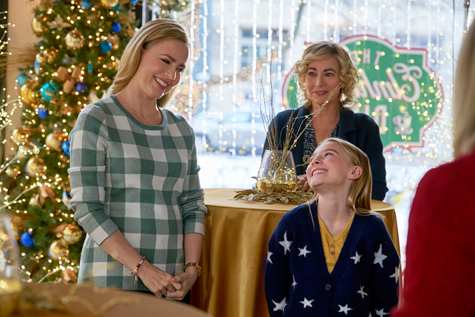 Q: And is this the first time you've worked with a horse on screen?

Amanda Schull: No, it is not, Joshua. I am – I was going to say a horse pro, but I'm very definitely not a horse pro. No; I have worked with horses a few times. And on “12 Monkeys,” they gave me horseback riding lessons and I rode a little bit.

Q: You know, I love “12 Monkeys,” and I have to go back and watch it now, because I was trying to think. I was like, I'm sure Aaron (Stanford, who played Cole) was on a horse, but I couldn't remember if you were in a horse or not. So, all right, OK; you got to reunite with a horse.

Q: Yeah, but you were way more – I know Cassie went off the rails a little bit, but she was way more sophisticated. I didn't know if the horse was really in her playbook. I’m going to have to go back and watch it now.

Q: All right, let me then continue my backtracking …

Q: … and shift to something that's a little bit fresher in my mind. Because, ironically, about 10 minutes after I sent the request to speak with you the other night, “Center Stage” was on. And, it was like midnight, but I didn't care – I was gonna stay up and watch it, because it's “Center Stage.”

Q: Well, you know, I'm an amazing writer and a great reporter, but I kind of suck as a boyfriend, so I had to stay up and watch it.

Q: I know it turned 20 this year, and I know you had an opportunity to reconnect with some fans and some castmates. What was that like, sort of reminiscing about that film this year?

Amanda Schull: It's so funny, because, in so many ways it seems like it was just yesterday that I did that movie and that I had that experience that summer with those amazing people. And then, in a lot of regards, I feel like when I was talking about it, like I was talking about a movie I had watched, not a life that I lived.

You know, it was 20 years ago, which, the fact that I can even talk about something 20 years ago, really makes me feel ancient; but at the same time, it was such – it was the experience of a lifetime for me. And obviously, it facilitated my career going forward in ways that I can't even possibly describe.

It was really fun to chat with everyone. I'm in loose connection with a lot of these people, even if it's just texts. I've caught up with a couple of them. So, I mean, to force everyone to sit down together to talk was such a nice treat for me. I love seeing their faces – and the hair development on Ethan (Stiefel), that was great! 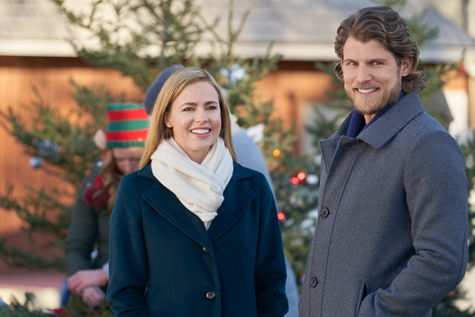 “For years,” Hallmark explains, “Lucy has played Santa to her small town’s community by making their holiday wishes come true. But when Lucy grants a little girl’s wish for a Christmas like she used to have with her mom, she unexpectedly finds her own wishes coming true in life and love.” Amanda Schull and Travis Von Winkle star in “Project Christmas Wish” on Hallmark Movies & Mysteries. (Photo by Steve Ackerman/©2020 Crown Media United States LLC)