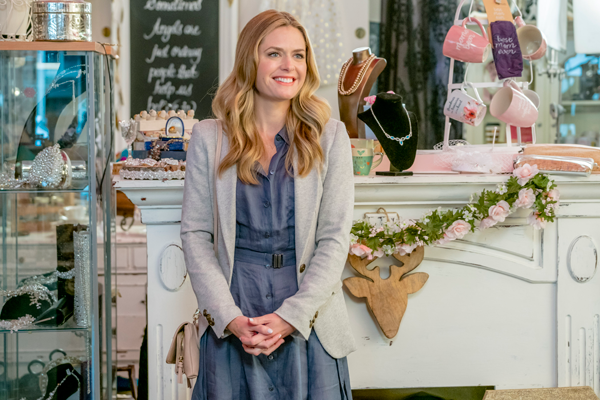 by jmaloni
Thu, Jun 22nd 2017 12:00 pm
Actress also working on 'Psych: The Movie'
By Joshua Maloni
Managing Editor
At the beginning of a recent phone interview with Maggie Lawson, her assistant said, "Hey, Josh, you're on with the wonderful Miss Maggie."
His description wasn't wrong.
It's been quite a three-year stretch for Lawson, who is genuinely nice in real life, and completely likeable on screen.
Professionally, she wrapped "Psych," a wildly popular USA Network series; starred in projects alongside TV and film A-listers Ashton Kutcher, Jane Lynch, Joel McHale and James Caan; and is headlining a new movie, "My Favorite Wedding," set to debut this weekend on the Hallmark Channel.
Personally, Lawson has worked to rescue animals and help at-risk children through an organization called The Tiger Frances Foundation.
"Tiger Frances is a foundation that I started with a dear friend of mine in 2013; 2014 we were officially up and running. We are an animal foundation," Lawson said. "We rescue animals, but we sort of have an education angle in that we go into schools, we work with School on Wheels. They're an organization that tutors homeless kids. We are actually going to be partnering with Big Brothers and Big Sisters soon. And what we do is, for kids who are in high-stress situations at home - and adults, actually; we've had some adults joining in some of the programs now - we take the animals in and the kids get to interact and have time and connect. And if it's an education-based program, they'll be able to do an assignment or something around it.
"It's just to sort of spread compassion and love and joy, and the connection between the animals and these kids is just - it's really powerful. And we're hoping that we can be a bright spot in those kids' day.
"We're going to be working with the Good Shepherd, as well. They work with women and children who are victims of domestic abuse."
"I love it," Lawson said. "We started as sort of an animal rescue, and then we got a call to work with the Girl Scouts, to help them get a service badge, and we sort of fell into this angle of helping kids and animals - seeing the connection between the animals and the kids, and how healing that is - sort of put us in this direction."
She added, "Our main program is called 'Love on Paws,' and that's sort of what we're focused on now. ... It's a beautiful thing."
Lawson is, indeed, wonderfully navigating through life.
The same can't be said for Tess Harper, the character Lawson plays in "My Favorite Wedding."
The Hallmark Channel puts it this way, "Tess Harper, a bright and resourceful young doctor, who can seemingly handle any problem, is paired with the best man time after time during the week leading up to her best's friend's wedding to save the event from one impending disaster after another. By the time the bride and groom say 'I do,' however, Tess realizes that perhaps her own longtime boyfriend may not be the right guy for her 'to have and to hold' after all."
The romantic comedy premieres Saturday.
Lawson gave us the scoop on "My Favorite Wedding," and spilled, well, very little on a certain holiday movie ... wait for it ... the "Psych-Os" are eagerly anticipating. 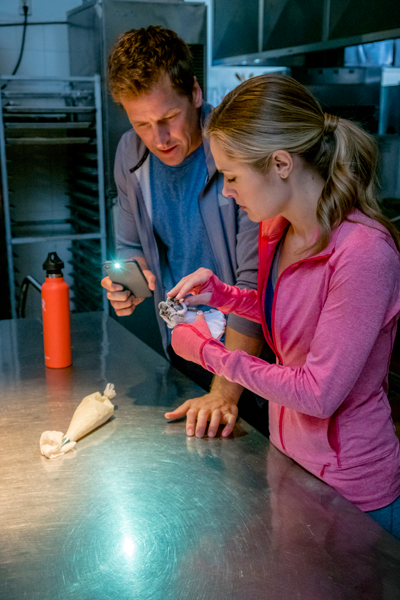 Maggie Lawson and Paul Greene in "My Favorite Wedding."
Q: Tell me about "My Favorite Wedding." What attracted you to this story?
Maggie Lawson: It's interesting, because there's a little "Psych" connection to this project, as well, and that is that Mel Damski, who was one of the directors on "Psych," was directing it. And then Kirsten (Nelson), who played the chief, her husband wrote the script.
When I read it, there was something really charming about the banter between the two lead characters; and the story is very sweet, in the fact that it is was sort of a family affair. It was sort of a no-brainer.
So, there were many things that attracted me to it.
Q: Your character, Tess Harper, it seems like she would be a fun character to portray. I'm guessing that there might be some shenanigans here?
Maggie Lawson: (Laughs) There's some shenanigans with her. Yeah, I would definitely put this in the romantic comedy category, because it's funny. Because, while Tess has everything on one side of her life - she's working towards a fellowship - she's a doctor - she's taken care of her family for a long time; she does all this stuff. You know, she's the one telling everybody, 'I've got it. I'll take care of it.' And then things start to sort of not go as planned, which is not what she's used to. And in that, she kind of unravels.
But it's centered around her best friend's wedding. Yeah, so, shenanigans in that everything in her best friend's wedding starts to fall apart. She's got to put it back together. Meanwhile, her own life is falling apart. She's trying to put it back together.
And the best man shows up, and he messes things up, too. (Laughs) He does get in on the shenanigans.
Q: You're playing opposite Paul Greene (Michael). What did he bring to the project, and what can you tell me about him?
Maggie Lawson: Paul's so great. Here's the thing: I'm a newbie on Hallmark. He's actually been working with them for a very, very long time. So he had a comfort already with the people and sort of how the projects go - which, by the way, is so smooth; it's such a well-rounded company. But yeah ... he's funny. I don't know if a lot of people know that about him. But he's actually very funny. He brought this comedic element.
He's a very grounded, earthy - he's a very interesting person. He brings a weight to a character that, I think, sometimes, he's obviously very handsome, but he has a lot of depth. And I think, in this type of banter, and the relationship between Tess and Michael, there is sort of a need (for that depth).
He's very interesting, and I think Hallmark is very lucky to have him be a part of their team.
Q: I've done a few articles now on Hallmark Channel movies, and everyone has just raved about the experience and really expressed a strong desire to return. Tell me a little bit more about your time on set, and what you liked about working with the Hallmark Channel.
Maggie Lawson: It's so well run, and so organized. I think, honestly, it was one of the most organized, easy, smooth - I mean, even the days were light. I think we had maybe one or two full days of work - full days being a 12-hour day.
Yeah, they have it down. They understand, I guess, their product and what they're doing so well. They work with the same people, which I think automatically creates an ease, and gives that sort of freedom and organization.
I was so impressed. I was like, "This is incredible," from like the day I arrived and started working. So, yes, it was a very, very positive experience.
Q: I wasn't sure if you would be available for a phone interview now, because I didn't know if you were on the set of a certain holiday movie that I'm very excited about.
Maggie Lawson: (Laughs) At this very moment, I am not on set. But I am in Vancouver for that holiday movie that we are both very excited about.
Q: Yes, yes. So, what can you tell me about this particular holiday movie that has fans jumping up and down around the country?
Maggie Lawson: (Laughs) I can't say a lot. But I can say that it is just like a family reunion. It feels like a warm hug. And we are having so. Much. Fun. I can't say much else.
Lawson's "Psych" castmate, Timothy Omundson, recently revealed he experienced a small stroke. He's been sharing his recovery on social media.
"He's a warrior," she said. "His spirit is so strong, and he's so positive."
"Psych: The Movie" will air this December on the USA Network. Multiple news outlets have reported "Chuck" star Zachary Levi will play the villain.
In the meantime, "My Favorite Wedding" debuts at 9 p.m. Saturday on the Hallmark Channel, and will encore at 7 p.m. Sunday. For more information, visit http://www.hallmarkchannel.com/. 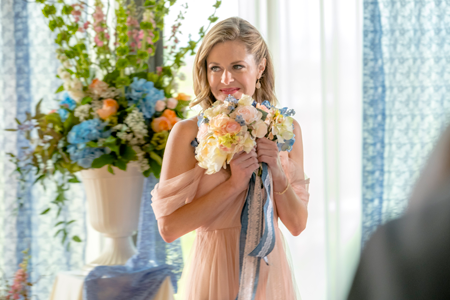 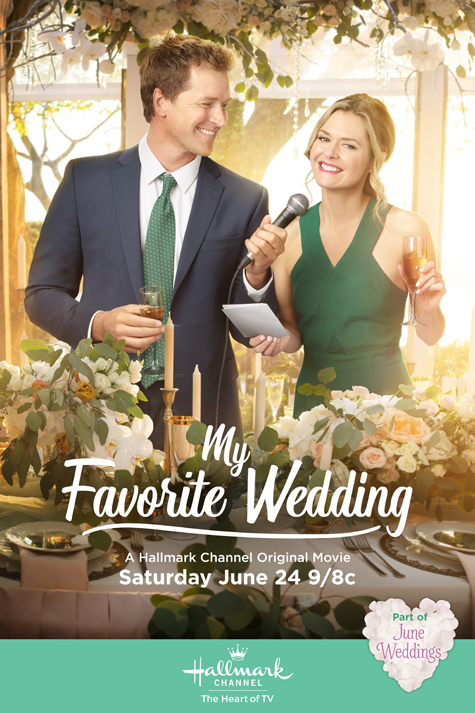