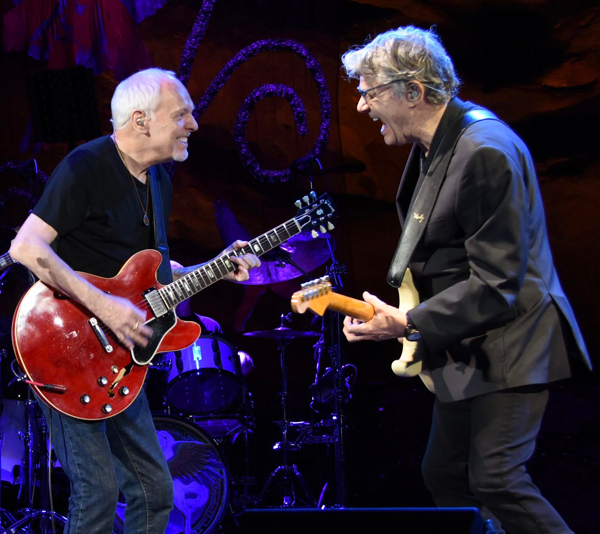 Artpark: As acts get bigger, so, too, does ticket price

by jmaloni
Sat, Mar 24th 2018 07:05 am
By Joshua Maloni
Managing Editor
The "oh my goodness" of seeing which superstar musicians are headed to Artpark this summer has been paired with another OMG: The ticket price to see these acts.
When Artpark & Company announced a "Tuesdays in the Park" double-bill with Rock and Roll Hall of Fame acts Peter Frampton and the Steve Miller Band in February, the Lewiston performing and visual arts company also introduced a new top-tier ticket price: $77. That's also the high-end stub fee for Steven Tyler and the Boy George and Culture Club '80s music bill. Those events went on sale Friday.
The concert series was free at the beginning of this decade.
On this writer's Facebook page, some fans expressed sticker shock while others said the pricing was fair to watch such high-caliber acts.
Many fans on both sides of the debate agreed Artpark & Company needed to book better - bigger, bolder - musical acts.
Venue management concurred. After a string of seasons in which concert attendance rose, numbers were down in 2016 and 2017.
The reality is that there are many aspects to concert booking that are out of Artpark & Company's control. Bands choose when to tour, which means the number of available acts will vary in any given year. And when musicians do go on the road, if they're popular, they have more say in what they'll earn.
That hasn't changed in 2018, but what has is Artpark & Company's determination to become more attractive to the type of act Artpark fans want to see this summer.
Artpark & Company's new director of marketing and sales, Dave Wedekindt, said, "We've raised this level of the series to a certain point that people expect a certain level of artist. In order to keep playing in that area, we need to be competitive."
Executive Director Sonia Clark said, "The only way to stay competitive is with increased ticket prices."
And 10 Percent for Your Manager
"The artist fees went up," Clark said. "Sometimes they doubled. Especially with senior artists that come from the '70s. Oftentimes they consider, 'This is my last tour.' 'This is almost my last tour.' They're willing to go on the road only for financial reasons. Also, artist fees from live entertainment are pretty much the only source of revenues for the artists. It used to be that the artists made their profits from the record industry. They would go on the road to promote their album. It's switched now. So the fees have grown exponentially."
For Artpark & Company, raising the top ticket price wasn't just a matter of paying for the acts, it was also a question of appeasing band managers.
Wedekindt just returned from the South by Southwest Conference and Festivals in Austin, Texas, where he learned the average ticket price for the top 100 concerts in the U.S. is $78.93.
"The agents who are selling these shows and putting these tours together expect to match that (ticket price) average," Clark said. "Their artists are expecting to be paid on that level."
"And the agents, when we establish fees for the artists, look at those numbers," she added. "Actually, it's a transparent process. We all look at what's possible. And they make sure that the artist receives at least 80 percent of net profit. So, it's a conversation between us and the artist and what the area can contain. And they've been pushing us for quite some time to raise the ticket prices. It's an ongoing conversation with the tour management. 'Why is your ticket so low?'
"It actually devalues the band, when their numbers are published industrywide, on Pollstar and elsewhere. The low ticket prices devalue the band. They look at it the same way you would look at a value of a painting. How much is this painting sold for? It works the same way in the music industry. It's business. What we've been able to do in the past is simply not the reality anymore." 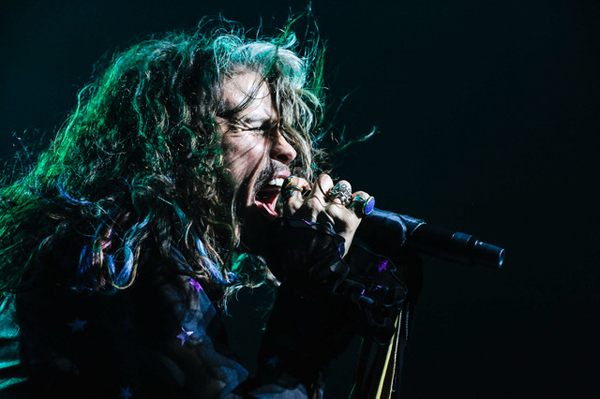 Steven Tyler performs at Artpark on June 12. (Photo provided by venue)
Ticket Tiers
"What we arrived at is a model that we hope can work for everybody," Clark said.
The ticket price tier for the Steve Miller/Frampton, Tyler and Culture Club shows is advance general admission lawn (carry-in chairs permitted), $17; general admission bowl (carry-in chairs permitted), $37; front-of-stage (standing-room-only), $77; and reserved seating (numbered chairs provided), $77.
Other shows are cheaper. Prices for Bruce Hornsby & The Noisemakers with The Wood Brothers range from $12 to $27; the Barenaked Ladies/Better Than Ezra/KT Tunstall concert and the "Voodoo Threauxdown" headlined by Trombone Shorty & Orleans Avenue both stretch from $12 to $37; while the "Wheels of Summer" Tour with Tedeschi Trucks Band starts at $14 and goes up to $42.
"Essentially, the $77 ticket - that I understand is the biggest concern - makes up for only 7 percent of all the venue capacity. We're talking about 500 tickets - that normally would sell out in about a minute and a half. Now they'll sell out in a couple of weeks," Clark said. "The majority of the population can still have their ticket at $17. And, again, we're only talking about three bands out of 12. The rest of the bands are all priced similarly, very close to what the Tuesday concert subscriber or attendee used to experience."
In addition to the front-of-stage, standing-room-only tickets, there are higher fees for reserved seating sections. But it's the so-called bowl area where Artpark & Company hopes to see more patrons.
"The bowl is another arrangement that we introduced, also, in an attempt to come closer to what the artist expects, and what this area can afford," Clark said. "It's only 18 percent of total venue capacity. ... There's about 1,800 tickets that are available at this price, only, out of 10,000."
The bowl system was previously used in 2016 for the Dolly Parton concert and then again last summer for the "Coors Light Concerts" series.
Clark said the bowl area could accommodate 3,500 people, standing, but will instead be an area where 1,800 can sit and have extra room to enjoy the shows.
"Everybody who comes with their own chair should have a much better experience - shouldn't need to line up early in the morning. Regardless of when you come to the concert, there should be plenty of space for you to put your chair down," she said. 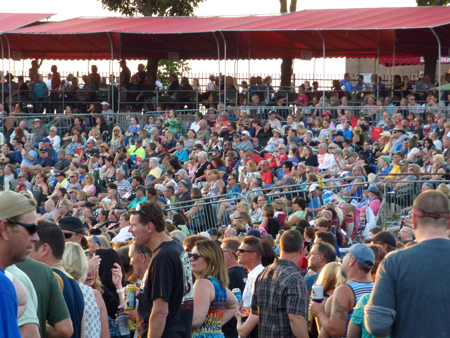 Artpark & Company hopes more people will take advantage of the ticket tier system this summer. (File photo)
Changing the Game
Though Artpark has continued to receive awards for the quality of its concert experience, "Specifically at the Tuesday series, we saw that the people were not quite satisfied with the level of the bands and the music that's been coming here in the past two years, which we chose to play it safe," Clark said. "We had to make sure our financial priorities came first, while also balancing the good bands, good music, and what the audience wants."
More and more promoters are pitching combo bills, where two or more artists join together to create something of a "megaticket"-type concert. Artpark has booked a handful of these shows.
"Steve Miller Band and Peter Frampton, as a package, again, understanding, yes, both of these bands have been to Artpark before. They both did very well separately. But having them play together is a very rare opportunity," Clark said.
Their respective managers understand this, as well, and "That's what really brings the price up," Clark said.
And yet, "When you look at the other venues on this tour the two are doing, you're going to pay well over $100 to be as close, front-of-stage - and probably still not even that close at some of these amphitheaters - than you would pay - the $77 that we're charging here," Wedekindt said.
Clark said both she and former Artpark President George Osborne would've turned down such a show in the past, based on the overall cost.
"This year we said, 'Yes,' and that was the big change," she explained. "We started saying yes to the kind of offers that used to come through our desk that we would normally say no to. This year we said, 'Let's figure out how to say "Yes." ' Let's find a way."
Clark said Artpark & Company will try the new ticket price system and see what happens.
"If the bowl-area tickets are selling well, and if people have a good experience with that, that can be a game-changer for Artpark."
With spring just a few days old, and the first concert still more than two months away, both Clark and Wedekindt said early ticket sales are encouraging.
Staging a Comeback
In the past three years, the area casinos and larger sites such as Darien Lake have made a concerted effort to book the type of act - if not the exact musicians - that have been mainstays at Artpark. They've also booked midweek performances.
"That desire for classic rock attendance is better than ever," Wedekindt said.
Clark said Artpark & Company felt as if it was losing ground in the marketplace the past two years. Now, "We feel very good about (our lineup)," she said. "Staying ahead of the game is absolutely key."
"We're coming back," Clark said. "We're not going away."
Wedekindt said Artpark also has succeeded in booking a musically diverse lineup of performers.
"This season, artistically, I think is very strong," he said.
"High quality is very important to us," Clark said.
"We know the Artpark experience is something special," Wedekindt said. "We'll say, 'You can go and stand outside and watch a band anywhere. But having that experience in Artpark is something very unique. And that's what keeps bringing people back."
Even at higher prices. 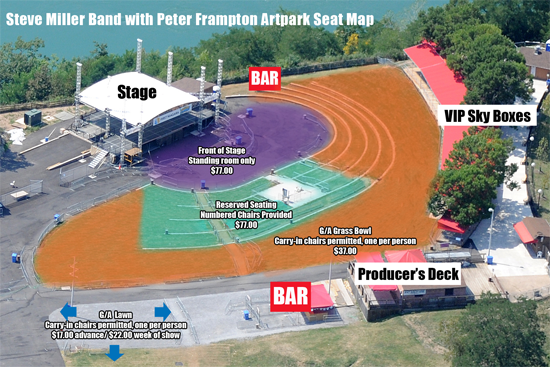 This is the seating/standing map for the Peter Frampton/Steve Miller, Steven Tyler and Culture Club shows. 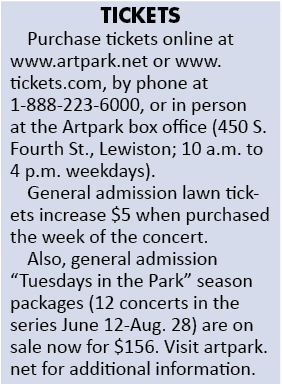