For all of us, it meant change - on the national scene, as well as on the local front.

What follows is a brief recap of our staff's favorite prominent news stories, and images of past Sentinel covers, encapsulating major events and trends in northern Niagara.

Click on the covers to read the full stories.

Some of these issues were resolved. Others will continue into 2017. Rest assured: We'll keep track of these newsmakers in the new year.

From the article: "Monsignor David G. LiPuma, pastor of St. Peter R.C. Church in Lewiston, took over as temporary administrator of the Youngstown church on Jan. 1, as appointed by Diocese of Buffalo Bishop Richard J. Malone.

"Monsignor J. Thomas Moran, who will be 84 this year, celebrated his last Mass as pastor at St. Bernard's on New Year's Eve. While parishioners applauded and cried, he paused in stepping off the altar in the church he loved and served for almost 31 years to smile and lift a hand in farewell.

"LiPuma spoke at Masses that weekend to assure his new parishioners that Saturday and Sunday services would continue at their church and that funerals, weddings and other sacraments will continue in Youngstown, as well as the church school classes already underway, at least for the time being."

>>STORY APPEARS ON COVER BELOW, ALONGSIDE SECOND TOPIC 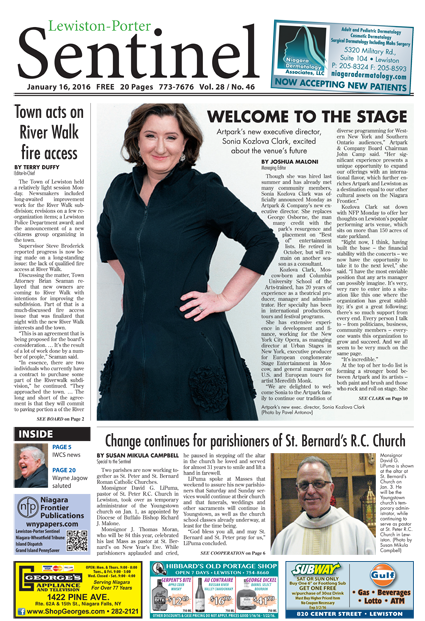 WELCOME TO THE STAGE

"Though she was hired last summer and has already met many community members, Sonia Kozlova Clark was officially announced as Artpark & Company's new executive director. She replaces George Osborne, the man many credit with the park's resurgence and placement on 'Best of' entertainment lists. He retired in October, but will remain on another season as a consultant.

"Kozlova Clark, Moscow-born and Columbia University School of the Arts-trained, has 20 years of experience as a theatrical producer, manager and administrator. Her specialty has been in international productions, tours and festival programs.

"She has extensive experience in development and finance, working for the New York City Opera, as managing director at Urban Stages in New York, executive producer for European conglomerate Stage Entertainment in Moscow, and general manager on U.S. and European tours for artist Meredith Monk." 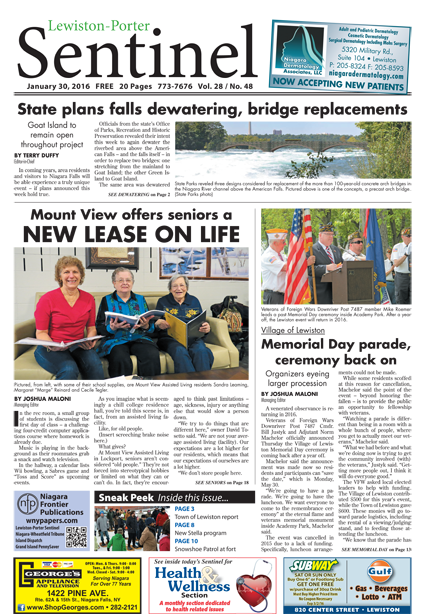 "In coming years, area residents and visitors to Niagara Falls will be able experience a truly unique event - if plans announced this week hold true.

"Officials from the state's Office of Parks, Recreation and Historic Preservation revealed their intent to again dewater the riverbed area above the American Falls - and the falls itself - in order to replace two bridges: one stretching from the mainland to Goat Island; the other, Green Is- land to Goat Island.

"At a public hearing at the Conference & Event Center Niagara Falls, plans were released calling for a damming to occur once again at the mouth of the Goat Island channel. The purpose this time would be to allow for removal and construction of the early 1900s-era concrete arch bridges linked to the time of Frederick Law Olmsted, which have long since deteriorated beyond repair." 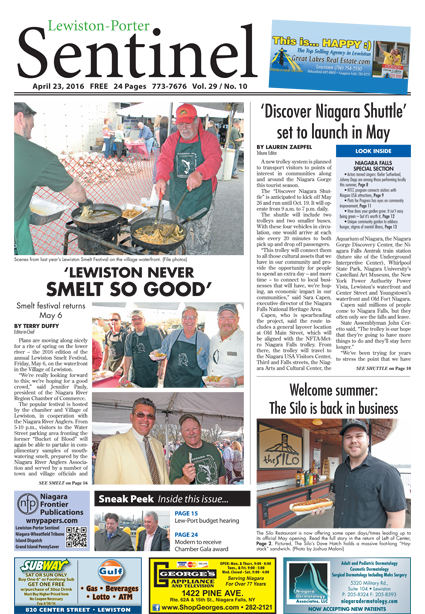 "A new trolley system is planned to transport visitors to points of interest in communities along and around the Niagara Gorge this tourist season.

"The Discover Niagara Shuttle is anticipated to kick off May 26 and run until Oct. 19. It will operate from 9 a.m. to 7 p.m. daily.

"The shuttle will include two trolleys and two smaller buses. With these four vehicles in circulation, one would arrive at each site every 20 minutes to both pick up and drop off passengers.

" 'This trolley will connect them to all those cultural assets that we have in our community and provide the opportunity for people to spend an extra day - and more time - to connect to local businesses that will have, we're hoping, an economic impact in our communities,' said Sara Capen, executive director of the Niagara Falls National Heritage Area." 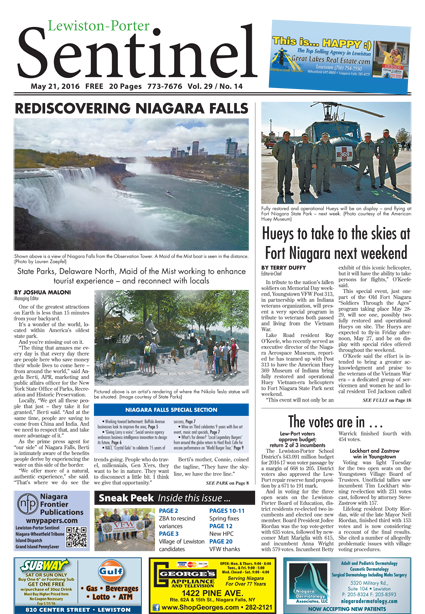 "One of the greatest attractions on Earth is less than 15 minutes from your backyard.

"It's a wonder of the world, located within America's oldest state park.

"And you're missing out on it.

" 'The thing that amazes me every day is that every day there are people here who save money their whole lives to come here -- from around the world,' said Angela Berti, APR, marketing and public affairs officer for the New York State Office of Parks, Recreation and Historic Preservation.

"Locally, 'We get all these people that just -- they take it for granted,' Berti said. 'And at the same time, people are saving to come from China and India. And we need to respect that, and take more advantage of it.' " 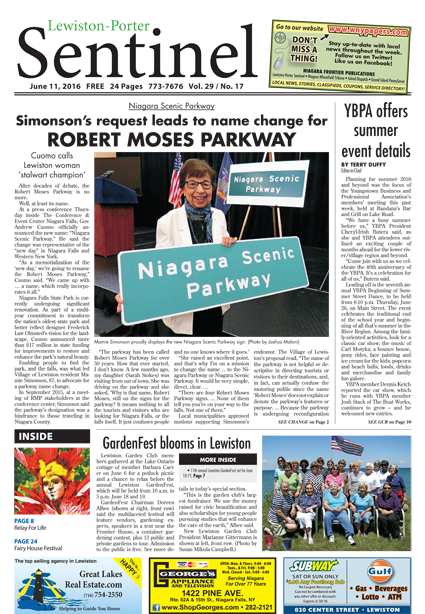 "After decades of debate, the Robert Moses Parkway is no more.

"Well, at least its name.

"At a press conference inside The Conference & Event Center Niagara Falls, Gov. Andrew Cuomo officially announced the new name: 'Niagara Scenic Parkway.' He said the change was representative of the 'new day' in Niagara Falls and Western New York.

" 'As a memorialization of the 'new day,' we're going to rename the Robert Moses Parkway,' Cuomo said. 'We came up with ... a name, which really incorporates it all.' ...

"Enabling people to find the park, and the falls, was what led Village of Lewiston resident Mamie Simonson to advocate for a parkway name change. ... Cuomo said Simonson 'has been a stalwart. A stalwart champion for change who never gave up.' " 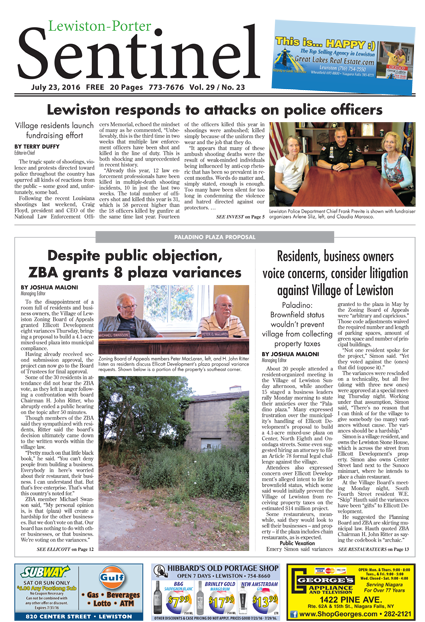 "The tragic spate of shootings, violence and protests directed toward police throughout the country has spurred all kinds of reactions from the public - some good and, unfortunately, some bad.

"Over the past week, the country has taken much of this to heart, with the result being refreshing actions seen in many communities in support of law enforcement.

"Claudia Marasco, member of the village Planning Board, and village resident Arlene Sliz announced they have embarked on a funding campaign aimed at helping the Lewiston Police on acquisitions of new equipment - namely the need for vests - to better protect LPD officers.

" 'It's bothered me since the Louisiana shooting,' Sliz said. 'This is getting ridiculous. We don't want it to happen here.'

"Organizers are seeking funding to cover 20 vests for Lewiston's 20 full- and part-time officers. The fundraiser began Monday. Thus far, $2,000 has been raised." 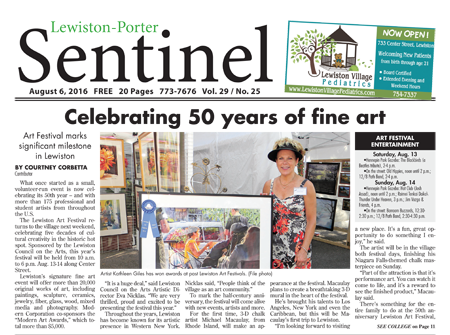 "What once started as a small, volunteer-run event is now celebrating its 50th year -- and with more than 175 professional and student artists from throughout the U.S.

"The Lewiston Art Festival returns to the village next weekend, celebrating five decades of cultural creativity in the historic hot spot. Sponsored by the Lewiston Council on the Arts, this year's festival will be held from 10 a.m. to 6 p.m. Aug. 13-14 along Center Street.

" 'It is a huge deal,' said Lewiston Council on the Arts Artistic Director Eva Nicklas. 'We are very thrilled, proud and excited to be presenting the festival this year.' " 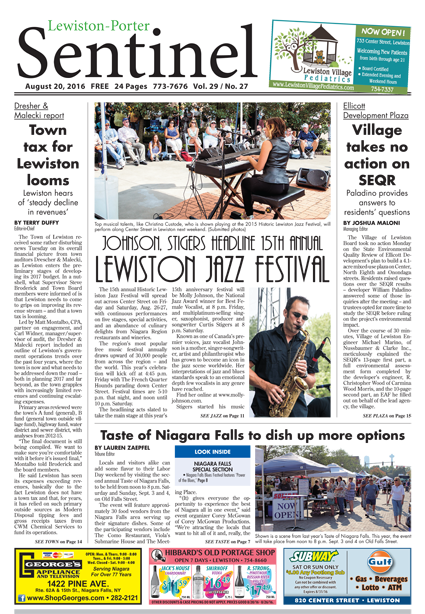 "The Town of Lewiston received some rather disturbing news on its overall financial picture from town auditors Drescher & Malecki, as Lewiston enters the preliminary stages of developing its 2017 budget. In a nutshell, what Supervisor Steve Broderick and Town Board members were informed of is that Lewiston needs to come to grips on improving its revenue stream - and that a town tax is looming.

"Led by Matt Montalbo, CPA, partner on engagement, and Carl Widner, manager/supervisor of audit, the Drescher & Malecki report included an outline of Lewiston's government operations trends over the past four years, where the town is now and what needs to be addressed down the road - both in planning 2017 and far beyond, as the town grapples with increasingly limited revenues and continuing escalating expenses." 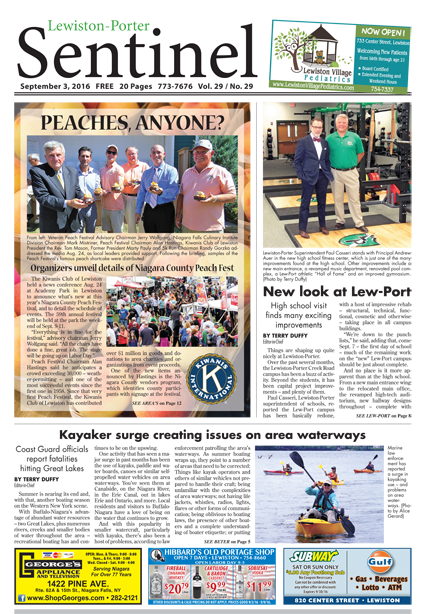 "Things are shaping up quite nicely at Lewiston-Porter.

"Over the past several months, the Lewiston-Porter Creek Road campus has been a buzz of activity. Beyond the students, it has seen capital project improvements - and plenty of them.

"Paul Casseri, Lewiston-Porter superintendent of schools, reported the Lew-Port campus has been basically redone, with a host of impressive rehab - structural, technical, functional, cosmetic and otherwise - taking place in all campus buildings.

" 'We're down to the punch lists,' he said, adding that, come Sept. 7 - the first day of school - much of the remaining work on the 'new' Lew-Port campus should be just about complete." 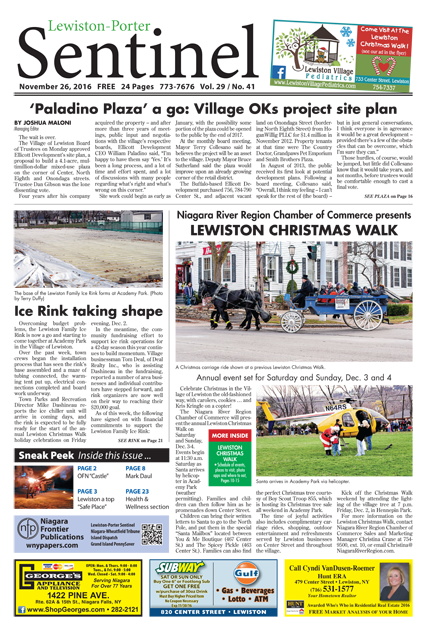 "The wait is over.

"The Village of Lewiston Board of Trustees approved Ellicott Development's site plan, a proposal to build a 4.1-acre, multimillion-dollar mixed-use plaza on the corner of Center, North Eighth and Onondaga streets.

"Four years after his company acquired the property -- and after more than three years of meetings, public input and negotiations with the village's respective boards, Ellicott Development CEO William Paladino said, 'I'm happy to have them say "Yes." It's been a long process, and a lot of time and effort spent, and a lot of discussions with many people regarding what's right and what's wrong on this corner.'

"Site work could begin as early as January, with the possibility some portion of the plaza could be opened to the public by the end of 2017." 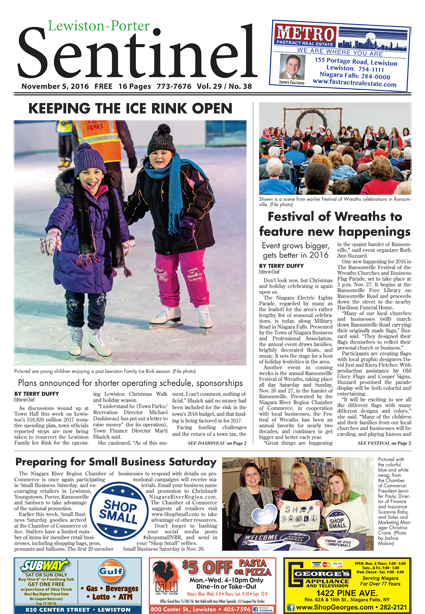 "As discussions wound up at Town Hall this week on Lewiston's $16.820 million 2017 tentative spending plan, town officials reported steps are now being taken to resurrect the Lewiston Family Ice Rink for the upcoming Lewiston Christmas Walk and holiday season.

" 'I understand he (Town Parks/ Recreation Director Michael Dashineau) has put out a letter to raise money' (for its operation),' Town Finance Director Marti Blazick said.

"She cautioned, 'As of this moment, I can't comment, nothing official.'

"Blazick said no money had been included for the rink in the town's 2016 budget, and that funding is being factored in for 2017. Facing funding challenges and the return of a town tax, the Town Board had earlier announced plans to put the Lewiston Family Ice Rink 'on ice' for the 2016 season.

" 'Give us a chance to do this right,' Town Supervisor Steve Broderick said last month of the town's intent to suspend rink operations for 2016 and return with a workable plan in 2017.

"Dashineau has come up with a new plan to save the rink. He announced this week the town's Parks/Recreation Department, together with community organizers, has decided to take on the task of bringing the rink back to life for this season."

The rink did open on time the first weekend in December. 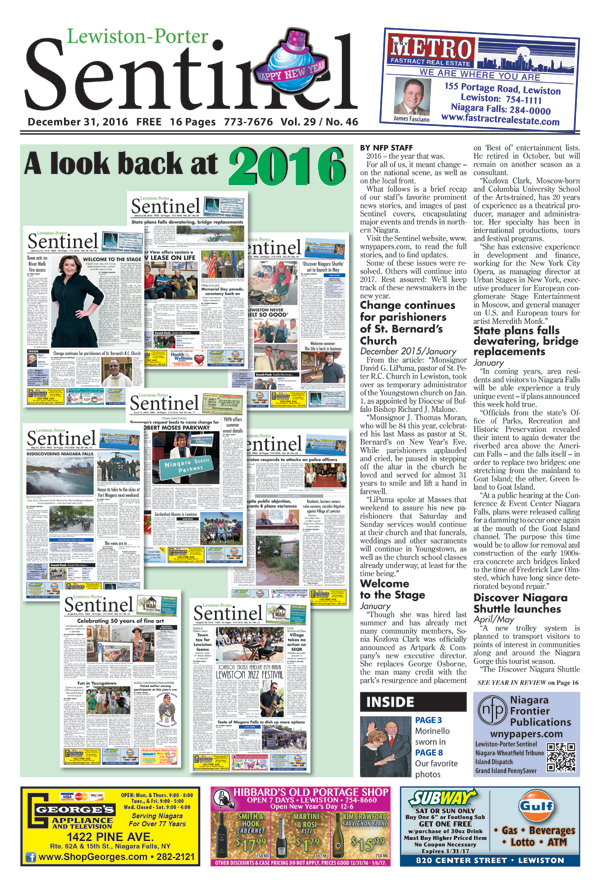