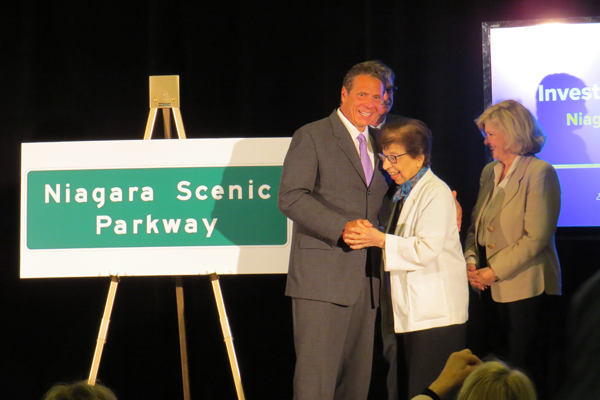 After decades of debate, the Robert Moses Parkway is no more.

Well, at least its name.

At a press conference Thursday inside The Conference & Event Center Niagara Falls, Gov. Andrew Cuomo officially announced the new name: "Niagara Scenic Parkway." He said the change was representative of the "new day" in Niagara Falls and Western New York.

"As a memorialization of the 'new day,' we're going to rename the Robert Moses Parkway," Cuomo said. "We came up with ... a name, which really incorporates it all."

Enabling people to find the park, and the falls, was what led Village of Lewiston resident Mamie Simonson to advocate for a parkway name change.

In September 2015, at a meeting of RMP stakeholders at the conference center, Simonson said the parkway's designation was a hindrance to those traveling in Niagara County.

"The parkway has been called Robert Moses Parkway for over 50 years. How that ever started, I don't know. A few months ago, my daughter (Sarah Stokes) was visiting from out of town. She was driving on the parkway and she asked, 'Why is that name, Robert Moses, still on the signs for the parkway? It means nothing to all the tourists and visitors who are looking for Niagara Falls, or the falls itself. It just confuses people and no one knows where it goes.'

"She raised an excellent point, and that's why I'm on a mission to change the name ... to the Niagara Parkway or Niagara Scenic Parkway. It would be very simple, direct, clear. ...

"There are four Robert Moses Parkway signs. ... None of them tell you you're on your way to the falls. Not one of them."

Local municipalities approved motions supporting Simonson's endeavor. The Village of Lewiston's proposal read, "The name of the parkway is not helpful or descriptive in directing tourists or visitors to their destinations, and, in fact, can actually confuse the motoring public since the name 'Robert Moses' does not explain or denote the parkway's features or purpose. ... Because the parkway is undergoing reconfiguration and redesign at the present time, this presents a golden opportunity to rename the parkway and make it more tourist- and visitor-friendly."

Cuomo said Simonson "has been a stalwart. A stalwart champion for change who never gave up." He added, "Today, the proof is in the pudding. We heard you. You were right. We now have a new parkway thanks to your advocacy."

She joined him on stage in unveiling a new parkway sign. 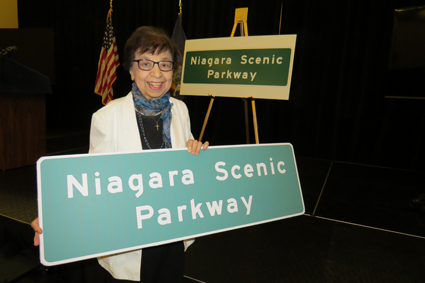 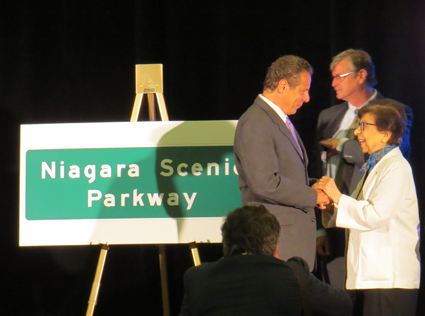 Simonson, 87, said, "It's wonderful. I just can't believe it's really happening. It took a lot of letter writing to here, there and everywhere. It really worked.

"I'm so glad they chose that name, too, because that's the name we suggested."

Cuomo said the change happened because Western New York leaders "had the courage to take on long-term problems that were allowed to fester for years."

"That's what's interesting about Western New York. We didn't solve any new problem - we didn't come up with any new formula. We just solved problems that were allowed to linger and fester for decades. For decades."

He said, "We're going back and grabbing these old, thorny problems that nobody wanted to resolve, and we're rolling up our sleeves and we are resolving them."

In March, Cuomo announced a two-mile portion of the north parkway from Main Street to Findlay Drive - a stretch he called "underutilized" - would be removed. The $42 million project, funded by the New York Power Authority, would include a reconstruction of Whirlpool Street, which will be redesigned into a two-lane street to provide all north-south access to the section of the Niagara Gorge corridor closest to the parkway.

As part of the announcement, Cuomo invited New Yorkers to propose a new name for the Robert Moses Parkway.

More than 450 online nominations were received during a five-week contest that concluded April 30. A panel comprised of state representatives and members of the local community convened, reviewed and discussed the nominations before unanimously selecting Niagara Scenic Parkway.

The new name will apply to both the south segment of the parkway beginning at the Grand Island Bridge and traveling 3.7 miles to John Daly Boulevard, and the north segment that starts at Findlay Drive in Niagara Falls and continues 11.7 miles to the Town of Porter.

After about 18 acres of pavement is removed at the Main and Findlay area, about 300 acres of green space will be opened up along the Niagara Gorge rim between Niagara Falls State Park and Whirlpool and DeVeaux Woods state parks. This will enable new recreational opportunities in the area, including scenic overlooks and trails that could be used for hiking, cycling and cross-country skiing.

He drew laughs when he said, "Go out there, get a hammer - it's a road; it's simple. It's asphalt. Get a big hammer, like a sledgehammer. Hit it enough times, it will crack."

"Then you take out the old road. And you put in a new road, where it should be," Cuomo continued. "And you open access to the water. And you make it pedestrian-friendly and community-friendly. And that is the project that we are in the midst of.

Dyster said, "Here in Niagara Falls, and in Niagara County, (Robert Moses) is associated more with the controversy over the parkway, probably, than it is with the construction of the power plant, which was his major accomplishment."

"Removing his name from the remaining portion of the roadway is very important practically, but (is) even more important symbolically. It shows that we're turning the page on an old era of urban renewal and the changes - mostly negative - that it brought not just to downtown Niagara Falls, but to all of the waterfront portion of the city that borders the Robert Moses Parkway. Instead, we're moving toward a greener 21st century infrastructure that is going to be much more sustainable. ... (And) is going to allow the next couple of generations of citizens here much greater access to the water resource than we've had for the last two generations."

NYPA owns about 71 percent of the land where the parkway will be removed.

Mamie and her late husband, Marvin Simonson, were Whirlpool Street residents in 1959 when NYPA took their home through eminent domain to build the parkway.

At a 2013 press conference, Congressman Brian Higgins said, "The Simonsons' story illustrates the destruction caused to this community and its residents by NYPA's placement of the Robert Moses Parkway as a barricade to Niagara Falls and the Niagara Gorge. It is not their story alone; it is the story of an entire city devastated by NYPA's actions.  Mrs. Simonson will never have her house back, but NYPA's leadership can right a wrong by giving this city its waterfront back."

On Thursday, Higgins issued a press release wherein he credited Mamie and Marvin for "fighting against the New York Power Authority's eminent domain action, which created what came to be the greatest barrier to economic opportunity for the City of Niagara Falls for decades."

"Her efforts in 1959 and in recent years were the same: To give Niagara Falls residents back their waterfront," Higgins said. "While Mrs. Simonson can't ever reclaim her home, her efforts have reclaimed the parkway for the community.

"Mrs. Simonson's unwavering spirit was the driving force behind our work to see NYPA pay for removal of the Robert Moses Parkway North, and this name change gives the city known around the world new ownership of its waterfront parkway."

In March, the State Senate passed a bill (S6718) to rename the Robert Moses Parkway as the Niagara Scenic Parkway. The bill was sent to the State Assembly, where Ceretto introduced legislation to change the name (A.9709). Ultimately, it was determined the governor could unilaterally change the name.

Removal of the parkway is expected to start in early 2018 and take about two years.