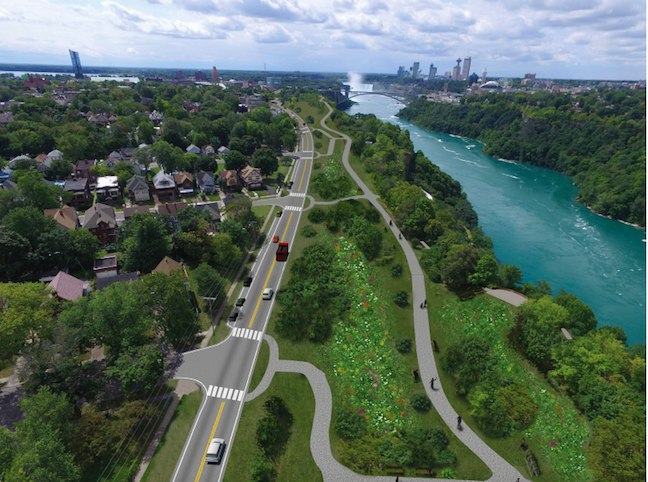 An artist's rendering of the Robert Moses Parkway "build alternative."

The New York Office of Parks, Recreation, and Historic Preservation has announced a hearing will be held to seek final public comment on a design report/environmental assessment (DR/EA) for the Robert Moses Parkway removal project. The meeting will be held Thursday, Aug. 25, at the Conference & Center Niagara Falls, 101 Old Falls St. An open house will begin at 5 p.m., and the formal public hearing will take place from 6-8 p.m.

Plans for the project include the removal of an underutilized two-mile segment of the RMP from Niagara Falls State Park in downtown Niagara Falls to Whirlpool and DeVeaux Woods state parks. It will also include a reconstruction of Whirlpool Street and a portion of Third Street.

The removal would realize an approximately 140-acre unbroken green ribbon of open space along the Niagara Gorge rim between the three state parks, fully accessible to adjoining city neighborhoods. This will enable new recreational opportunities in the area, including scenic overlooks and trails that could be used for hiking, cycling and cross-country skiing.

The DR/EA presents design components of the "build alternative," which specifically involves: the demolition/removal of all RMP expressway lanes/interchange/accessory facilities in the subject road segment; reconstruction of Whirlpool Street from Findlay Drive to Cedar Avenue, and Third Street from Cedar Avenue to Main Street; natural restoration of the landscape/habitat along the Niagara Gorge rim on lands reclaimed from the RMP removal; construction of a pedestrian/bicycle trail network along the Niagara Gorge rim (as part of the Niagara River Greenway Commission's shoreline trail system) linking to existing trails within the gorge and to adjoining city neighborhoods; and incorporation of associated streetscape amenities/betterments.

The DR/EA also evaluates the social, economic and environmental impacts of implementing the "build alternative" compared to the "no-build" alternative, which would involve leaving all current RMP facilities in place for the foreseeable future.

The DR/EA was developed in compliance with Federal Highway Administration/New York State Department of Transportation regulations implementing the National Environmental Policy Act; the New York State Environmental Quality Review Act; Section 4(f) of the U.S. Department of Transportation Act of 1966; Section 106 of the National Historic Preservation Act; the New York State Eminent Domain Procedure Law; and a host of other federal/state laws and regulations governing transportation projects. The DR/EA public review is intended to provide a single forum for accepting public comments in compliance with all of these laws and regulations.

The DR/EA is available for review online at State Parks' website at http://nysparks.com/inside-our-agency/public-documents.aspx. Hard copies are available at any of the following locations during normal business hours:

If one cannot attend the public hearing, comments may be submitted at any time during the public comment period (which ends Sept. 9, 2016), via email to [email protected] (include "RMP Removal Project Public Comments" in the subject line), or via regular U.S. mail or hand-delivery to:

This project is being supported by the New York Power Authority, Empire State Development/USA Niagara Development Corp., the City of Niagara Falls and the New York State Department of Transportation.