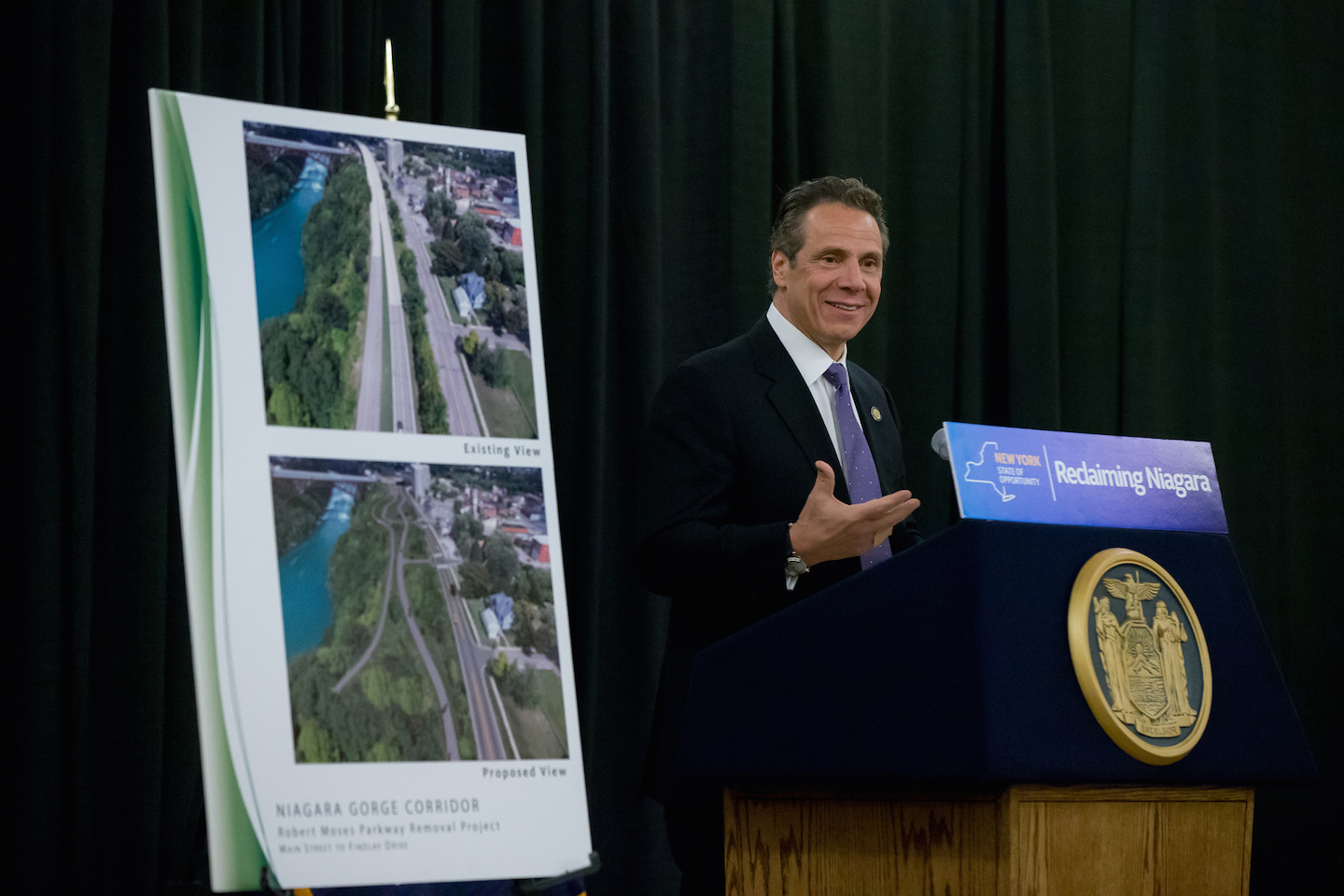 Gov. Andrew M. Cuomo made an announcement that included improved access to the waterfront, at the Niagara Falls Conference & Event Center. He is shown below shaking hands with Lewiston's Jerry Mosey.

Governor launches competition encouraging New Yorkers to propose a new name for the Robert Moses Parkway; online submissions will be accepted until 5 p.m. April 30 at http://go.ny.gov/Niagara

Gov. Andrew M. Cuomo today announced New York state will replace an underutilized two-mile stretch of the Robert Moses Parkway North in Niagara Falls with open space, scenic overlooks and recreational trails to make the waterfront more accessible to residents, tourists and visitors alike. The project marks the largest expansion of green space since the Niagara Reservation was designed in 1885, and will link the Niagara River Gorge and Falls into a single destination to allow easier access to the water's edge.

"The unparalleled natural beauty of the Niagara Falls attracts millions of visitors every year and today we are continuing to build on what makes this region so special," Cuomo said. "This project will reimagine the parkway to better utilize the surrounding parkland and open up the waterfront for all to enjoy. Niagara Falls is one of the most beautiful destinations in the world, and we will continue to make transformative investments that help maintain the city's status as a world-class tourism destination."

The project will remove an underutilized two-mile segment of the parkway from Main Street to Findlay Drive. It will include a reconstruction of Whirlpool Street, which will be redesigned into a two-lane street to provide all north-south access to the section of the Niagara Gorge Corridor closest to the parkway.

The governor also launched a new competition that will give New Yorkers the opportunity to rename the Robert Moses Parkway. Those interested can submit name suggestions that reflect the rich history and natural environment of the region. The deadline for online submissions is 5 p.m. April 30. A panel comprised of state representatives and members of the local community will select the winning name. The new name will be unveiled on a permanent sign during an official ribbon-cutting event when the project is complete. Suggestions can be submitted at http://go.ny.gov/Niagara.

After about 18 acres of pavement is removed, about 300 acres of green space will be opened up along the Niagara Gorge rim between Niagara Falls State Park and Whirlpool and DeVeaux Woods state parks. This will enable new recreational opportunities in the area, including scenic overlooks and trails that could be used for hiking, cycling and cross-country skiing.

The $42 million project will be funded by the New York Power Authority, which owns about 71 percent of the land where the parkway will be removed. As part of the construction of the nearby Niagara Power Project in the 1950s, NYPA built the Robert Moses Parkway. It was viewed then as necessary to both enhance tourism to compete with the Canadian side of the falls, and to also dramatically reduce commuting times in the area.

In 2014, NYPA provided up to $2 million for preliminary engineering and environmental clearances for the project, including removal of the parkway segment, planning for landscape and habitat restoration of the rim landscape and reconstruction of Whirlpool Street, which adjoins the current alignment of the parkway. The New York State Office of Parks, Recreation and Historic Preservation will also contribute $2 million toward the project.

Removal of the parkway is expected to start in early 2018 and take about two years. The road is partially owned by State Parks. The road is maintained and operated by the state's Department of Transportation, which will oversee the bidding and construction process for the project.

Gil C. Quiniones, NYPA president and CEO, said, "It's not often that we get to rethink how we use infrastructure to this degree. We're proud to be part of this dramatic transformation of the Niagara River Gorge."

John R. Koelmel, NYPA chairman, said, "It's exciting that lifelong residents of Western New York will be able to experience the gorge and falls in a whole new way, not to mention the millions of visitors who make the falls one of the state's premier tourist attractions."

Empire State Development President, CEO and Commissioner Howard Zemsky said, "The Robert Moses Parkway removal project will allow for direct recreational access to the Niagara River, and the region will greatly benefit from removing this physical and psychological barrier that has impeded the Niagara Gorge and Niagara Falls neighborhoods for decades."

Rose Harvey, State Parks commissioner, said, "Connecting and enhancing hundreds of acres of green space along the Niagara Gorge will benefit both the tourists who visit the region and the people who live here. It's yet another example of Gov. Cuomo's commitment to revitalizing both the city and the state park at Niagara Falls."

Matthew J. Driscoll, DOT commissioner, said, "Gov. Cuomo has once again developed an infrastructure project, which considers all users. Maintaining mobility while opening up waterfront access is a big win for this community and its visitors."

State Sen. Robert Ortt said, "This vital project is a tremendous victory for the City of Niagara Falls and the end result of cooperative efforts at the local, state and federal level. Removing the north section of the Robert Moses Parkway will free up acres of open space and connect neighborhoods to their waterfront. This plan balances the needs of tourism and transportation, and will in fact enhance them, while focusing on long-needed economic and community development. I applaud Gov. Cuomo and NYPA for making this a priority and I look forward to working with them to transform the entire falls."

Assemblyman John Ceretto said, "Reconfiguring the Robert Moses Parkway will have a transformational impact, allowing city residents, as well as tourists, to reclaim their waterfront. No longer having an expressway in our backyard will open up the area for recreational and leisure activities. I couldn't be more proud of the progress that this administration and I are making to enhance opportunities in Niagara Falls. This plan will undoubtedly foster a brighter economic future for our families, the City of Niagara Falls and the surrounding communities."

City of Niagara Falls Mayor Paul Dyster said, "Gov. Cuomo has demonstrated his perseverance as he rids the City of Niagara Falls of the Robert Moses Parkway and its decades of negative impacts. Under the governor's visionary leadership, we are privileged to bear witness to the largest expansion of the park at Niagara Falls since the days of Frederick Law Olmsted. Today, the Robert Moses Parkway North removal is becoming a reality, and another section of our world-class waterfront will finally be returned to our residents and our visitors from across the globe." 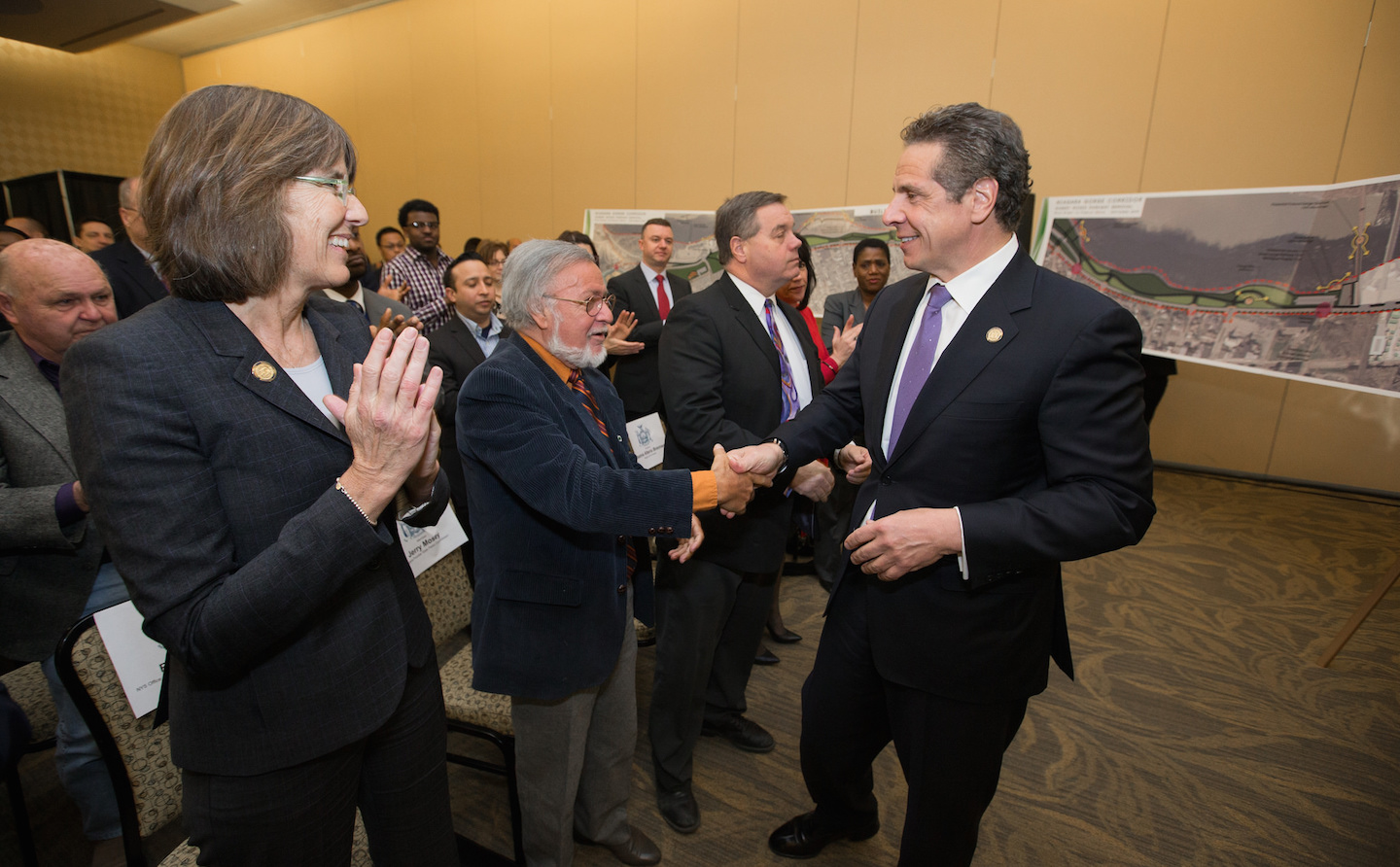