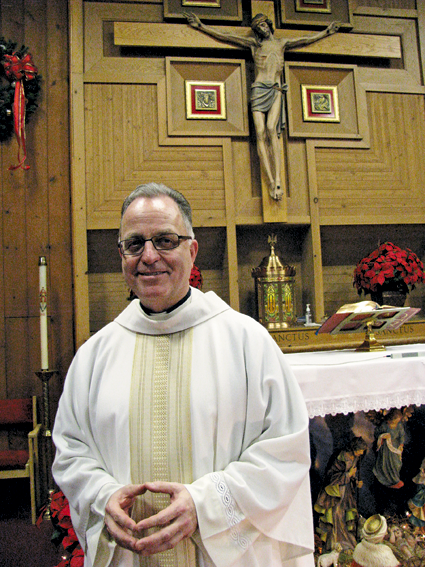 Monsignor David G. LiPuma is shown at the altar at St. Bernard's Church on Jan. 3. He will be the Youngstown church's temporary administrator, while continuing to serve as pastor at St. Peter R.C. Church in Lewiston. (Photo by Susan Mikula Campbell)

Monsignor David G. LiPuma, pastor of St. Peter R.C. Church in Lewiston, took over as temporary administrator of the Youngstown church on Jan. 1, as appointed by Diocese of Buffalo Bishop Richard J. Malone.

Monsignor J. Thomas Moran, who will be 84 this year, celebrated his last Mass as pastor at St. Bernard's on New Year's Eve. While parishioners applauded and cried, he paused in stepping off the altar in the church he loved and served for almost 31 years to smile and lift a hand in farewell.

LiPuma spoke at Masses that weekend to assure his new parishioners that Saturday and Sunday services would continue at their church and that funerals, weddings and other sacraments will continue in Youngstown, as well as the church school classes already underway, at least for the time being.

"God bless you all, and may St. Bernard and St. Peter pray for us," LiPuma concluded.

Daily morning Masses at St. Bernard's have been cancelled, but LiPuma said this week he has noticed Youngstown residents now attending weekday Masses in Lewiston.

LiPuma recently met with the bishop and said Malone plans to come celebrate a Mass at the Youngstown church, and that Sister Regina Murphy, diocesan director of research and planning, will head up a parish meeting. Also, a special Mass and dinner honoring Moran is being discussed. Dates for these events have yet to be set.

In the first combined bulletin, LiPuma wrote: "The appointment as temporary administrator is so that I can take care of the temporal as well as the spiritual needs of St. Bernard's parish until a final decision is made on how we will move forward under the bishop and in consultation with others. Please know that I will keep everyone informed as we move forward step by step. ... We are family, friends and good neighbors, and I know that together we can do great things for the Lord and for one another."

Venne is still available to take calls and answer questions at the Youngstown rectory from 9 a.m. to 1 p.m. Mondays, Wednesdays and Fridays.

Because Mass times are similar at both locations, LiPuma said the Barnabites at Our Lady of Fatima Shrine, the Vincentians at Niagara University and the Rev. John Graden of the Oblates of St. Francis de Sales have agreed to help celebrate Masses at both churches.

Mass times and the names of who will be serving can be found each week at the website www.stpeterlewiston.org.

LiPuma, 55, was born in Buffalo and attended Catholic schools in Lancaster before going to Wadhams Hall Seminary College in Ogdensburg. From 1982-87, he was at North American College in Rome, Italy (where Moran also had studied). LiPuma was ordained a priest on July 25, 1987.

He served at various Erie County churches and in several diocese positions. From 1997 to 2013, he was secretary to bishops Henry J. Mansell, Edward U. Kmiec and Malone, respectively. He became pastor at the St. Peter parish on Aug. 24, 2013.

He has received a variety of community awards, among them the Top Hat Award from St. Vincent de Paul Society Central Council of Buffalo, the Gaudete Medal of St. Bonaventure University and the Brothers of Mercy Humanitarian of the Year Award.

Moran, at LiPuma's invitation, moved into the St. Peter's rectory on Jan. 2.

On Moran's first evening in residence, LiPuma stopped by Moran's rooms to ask if he needed anything.

"He already had his red (St. Louis) Cardinals blanket on the back of his couch, and I found frozen pizza in our freezer," LiPuma told his new Youngstown parishioners.

LiPuma calls Moran, who was ordained about 58 years ago, a "priest's priest," someone younger priests look up to and admire.

"He's really the model for what a good pastor should be," LiPuma said.

"He was totally concentrated on serving God and church, and taking care of God's people."