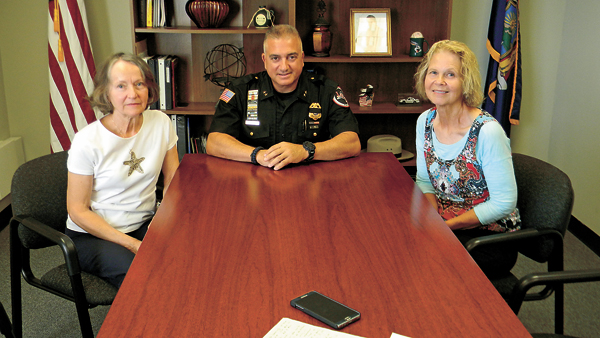 'Invest in a Vest': Lewiston responds to attacks on police officers

The tragic spate of shootings, violence and protests directed toward police throughout the country has spurred all kinds of reactions from the public - some good and, unfortunately, some bad.

Following the recent Louisiana shootings last weekend, Craig Floyd, president and CEO of the National Law Enforcement Officers Memorial, echoed the mindset of many as he commented, "Unbelievably, this is the third time in two weeks that multiple law enforcement officers have been shot and killed in the line of duty. This is both shocking and unprecedented in recent history.

"Already this year, 12 law enforcement professionals have been killed in multiple-death shooting incidents, 10 in just the last two weeks. The total number of officers shot and killed this year is 31, which is 58 percent higher than the 18 officers killed by gunfire at the same time last year. Fourteen of the officers killed this year in shootings were ambushed; killed simply because of the uniform they wear and the job that they do.

"It appears that many of these ambush shooting deaths were the result of weak-minded individuals being influenced by anti-cop rhetoric that has been so prevalent in recent months. Words do matter and, simply stated, enough is enough. Too many have been silent for too long in condemning the violence and hatred directed against our protectors. ...

"It is time for all law-abiding citizens to strongly condemn this violence directed against our protectors and help to restore respect for our laws and the brave individuals sworn to enforce them."

Over the past week, the country has taken much of this to heart, with the result being refreshing actions seen in many communities in support of law enforcement.

It was evident at Monday's Village of Lewiston Board of Trustees meeting, where reactions by village elected officials and residents were strong and very supportive of the Lewiston Police following comments on the issue by Chief Frank Previte.

Previte said the meeting also "initiated some interaction with the residents and attendees. They started asking questions, as to if we had what we needed at the police department."

"It hit an emotional nerve for me. I've been here a long time as part of this department," he said. "To see and feel the actual concern and care, and have that on their mind and us on their mind, to be protected - especially with the conditions and everything that's going on - means a ton to me as police chief, and it means tons to these guys as officers.

"Just to know. I mean, we're dedicated to this community. There is not an officer here that wouldn't place his or her life in danger for anybody, any resident of the village or town.

"For them to show that concern, I can't tell you what that meant to me. It really does. It means a lot to us."

Previte continued, "Sometimes in this job, as you guys probably know, it feels sometimes like we're on the kicking end, if you will, because we are not the ones to tell people things they want to hear. We usually give out tickets; we usually have to deal with bad situations.

"And when we see the concern that the public has, it just took me by complete surprise. It was not something I expected to happen.

"To see that, and to know that residents have that kind of concern, we're on their minds, they're worried and concerned about us in light of everything going on, was moving, to say the least. It did make quite an impression on me."

At Monday's session, questions were asked and offerings of help were frequent from residents. "They asked a lot of questions, if we had helmets, different protective gear," Previte said.

One of the concerns aired was the level of the body armor the LPD currently has available for its officers. Previte pointed to a need for new vests.

"The vests that we have, that we wear on our regular patrol, are not sufficient for the incidents that we're seeing," he said. "They're not sufficient; they would not sufficiently protect an officer with some of the weapons that are being used now in these incidents - the assault-type rifles and rounds. That is a different situation. It creates a risk for us, because of the type of weapons being used compared to equipment that we have to protect ourselves from those type of things."

Following the meeting, the offerings of help continued. And this week, two area women took it a step further.

Claudia Marasco, member of the village Planning Board, and village resident Arlene Sliz announced they have embarked on a funding campaign aimed at helping the Lewiston Police on acquisitions of new equipment - namely the aforementioned need for vests - to better protect LPD officers.

"It's bothered me since the Louisiana shooting," Sliz said. "This is getting ridiculous. We don't want it to happen here."

Sliz said, on one of her frequent village walks with Marasco, the two discussed ideas of how they could help LPD officers, particularly in light of the recent attacks on law enforcement.

"We were talking about that, and how this 'home, sweet home' place that we have, we cherish and love living in, we, too, cannot take the attitude that it cannot happen here," Marasco said. "Because that is the first thing every community says when something happens, 'I never thought it would happen here.' "

At Monday's meeting, Marasco asked Previte directly, "Do you have everything you need, especially the protective gear for the bulletproof vests?"

Recalling the reactions of attendees to Previte's comments that night, she continued, "You could heard a pin drop in that room, because people who have been thinking about this, they became engaged.

"I think we were a bit shocked about how vulnerable the department may be if something happened.

"People were asking how many vests, how much is each vest."

"One of the trustees, he said to me 'I never expected in my lifetime to (be) sitting with the board and have that topic.' So we have reached that. ... It opened the discussion, 'We acknowledge we have something, what are we going to do?'

With that, the funding ideas began to turn. After checking a GoFundMe site and questioning local banks on the "how to's" without any success, Marasco approached the Village of Lewiston and found answers.

"With the help of (Village Treasurer) Ed Walker and (Village Clerk) Amy Salada, next thing you know, she said, 'Claudia, you have a Peace Garden account with us. We're going to ... create an account.' "

"The village will take care of all the money funneled," Marasco said. It would then be accessible to Previte for LPD equipment needs.

"We are talking about 20 vests for 20 officers, town and village consolidated together," he said.

Of the collection effort, Marasco continued, "This is going to happen fast. The essence is speed, because we do not know what is coming."

"This is established, there is money in the account already through the village," she added. "My thinking is if we can get something like this in a small community, there is copycat crime. If we can get this, we'll take and spin it as a 'copycat project' for other communities to imitate."

Currently, donations are being handled via traditional means, with hand deliveries to the village offices or via mail. An online donation link has yet to be established, as links with the village or town for payment of tax bills, water bills and the like do not exist at present.

With the village arrangement, "People will get an actual receipt. Everything will be kept there and deposited in that account. The only people who will have access to that will be the chief," Marasco said.

Organizers are seeking funding to cover 20 vests for Lewiston's 20 full- and part-time officers. The fundraiser began Monday. Thus far, $2,000 has been raised.

"We encourage involvement from any of the organizations, from the VFW to the Rotary to the whoever, if they can find it in their fund balance to make a donation, of any amount, send it," Marasco said. "The same for businesses; same for residents, families. This is something children can be involved with."

While the initial focus will be on raising money for the vests, Previte said he would like to keep it open-ended to accommodate other LPD equipment demands in the future, be it response situations of medical emergencies.

"This is our starting point," said Previte, who was quick to add he preferred not to make a campaign of reaching out to residents. "We look not to take; our basic purpose here is that we're servants. We serve the community and we really take that seriously."

Of the collection effort, "It is so meaningful, and does so much for the morale of this department," Previte said.

LPD has acquired specialized equipment to deal with school shootings, but with the latest unforeseen attacks on police it realized it still "has a gap."

"This (the vests) is the biggest gap. I don't like putting officers in situations; that's why it is so important to get equipment," Previte said. "We have a need, just because the way things have changed, socially, with the types of incidents that we're seeing.

"To address that gap is important to me. I don't like putting officers into positions where I cannot afford them the best protection. It's bad enough we have to be in those situations. When they are, I'd like to know ... I am giving them the best equipment to be in a bad situation.

"We're part of the community, we're out there, and for the reassurance that you guys have our backs or our front. You don't know what that does for us."

"We're beginning to understand," Marasco said. "I know of the value they bring.

"Look, we couldn't be more appreciative of this," Previte said. "As a department, as the head of this department, speaking for everybody, I could tell you there is nothing that I can remember that has moved me (more) than we have seen from the community. It means a ton to the men and women here. Especially in light of everything that is going on. To know that our community supports us, cares about us and is behind us, because that is how officers feel about this community and that is why we work here. It makes us even more proud of what we do and where we serve."