The Buffalo Bills defeated the Miami Dolphins Sunday at The Ralph in Orchard Park. (photo by Terry Duffy)

The NFL's finance committee voted Wednesday to approve the sale of the Buffalo Bills to Buffalo Sabres owner Terry Pegula and his wife, and Kim.

WGRZ reported the $1.4 billion sale must be approved by a majority of NFL owners. They can vote accordingly when they meet Oct. 8 in New York.

Of the sale, Gov. Andrew M. Cuomo said, "Today is yet another great day for Buffalo. Terry and Kim Pegula's bid to purchase the Buffalo Bills has been a sign of hope for Western New York since it was first made public, and the NFL's unanimous approval of their bid allows the Bills to remain where they belong. On behalf of all New Yorkers - and all of the many dedicated Bills fans who cheer them to victory game after game - I offer my congratulations to the Pegulas, the Bills, and the people of Buffalo on this important milestone." 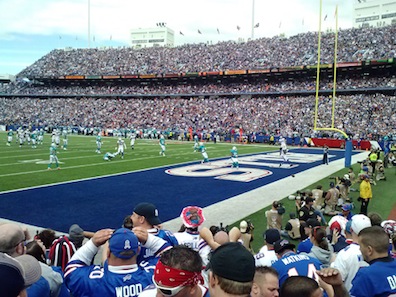