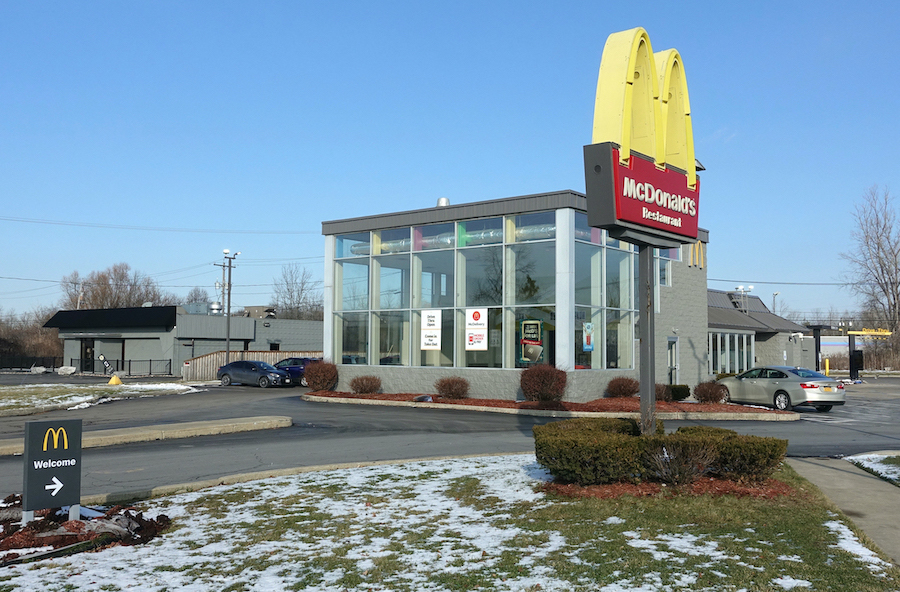 Change is coming to Grand Island’s McDonald’s. Located at 2231 Grand Island Blvd., the familiar restaurant had fallen into disrepair. There were complaints of broken things in the restaurant, including a milkshake machine that was often out of order.

And then, the restaurant was sold to a couple who were new to the world of being owner-operators of McDonald’s. They were in the process of building their business when they purchased the store.

The new owner-operators, Jeff and Kylie Byrne, said they are excited about owning the business and that they are dedicated to giving customers a positive experience and to rebuilding trust with the community. Jeff said he understands the business, having started his career 14 years ago as a crew person, working with an owner-operator in Queens.

“He worked his way up,” Kylie said.

Jeff became a supervisor in Long Island. He then got a job with the McDonald’s corporation and relocated to Saratoga Springs.

“I consulted owner-operators for five years. I oversaw 140 restaurants, 12-15 operators, and basically shared some of the best bets I’ve learned where I worked prior to help them better their business at the end of the day,” Jeff said.

His goal, however, was to be an owner-operator, and he began the process by completing a rigorous training program, much of it offered online during the COVID-19 pandemic lockdowns.

The couple knew they wanted to stay in New York state. So, when an opportunity came up in March 2021 for the couple to purchase a store in Western New York, they took it. They sank their entire life’s savings into their new business.

“You have to have a certain amount of money to get into this business,” Jeff said. “Over the years, with the savings, after paying for our education, we pulled together our money and made it work, based on the price of that restaurant. You take out a business loan. That was basically our life savings, everything that we did. My wife stayed home with the two kids. I came over, essentially in my parents’ car, in their Kia, because I didn’t have a car. I gave back my company car.

“I had a printer in my trunk, all my clothes. She sold the house in three months. I stayed in a hotel for three months out in Cheektowaga, and I worked the restaurant every day for nine months. Then I was able to build up enough equity and McDonald’s graciously said, ‘We have more restaurants available.’ I had saved from an equity standpoint, just like a house, and we were able to purchase four more, this being one of them. Recently, we were able to purchase our East Aurora restaurant.” 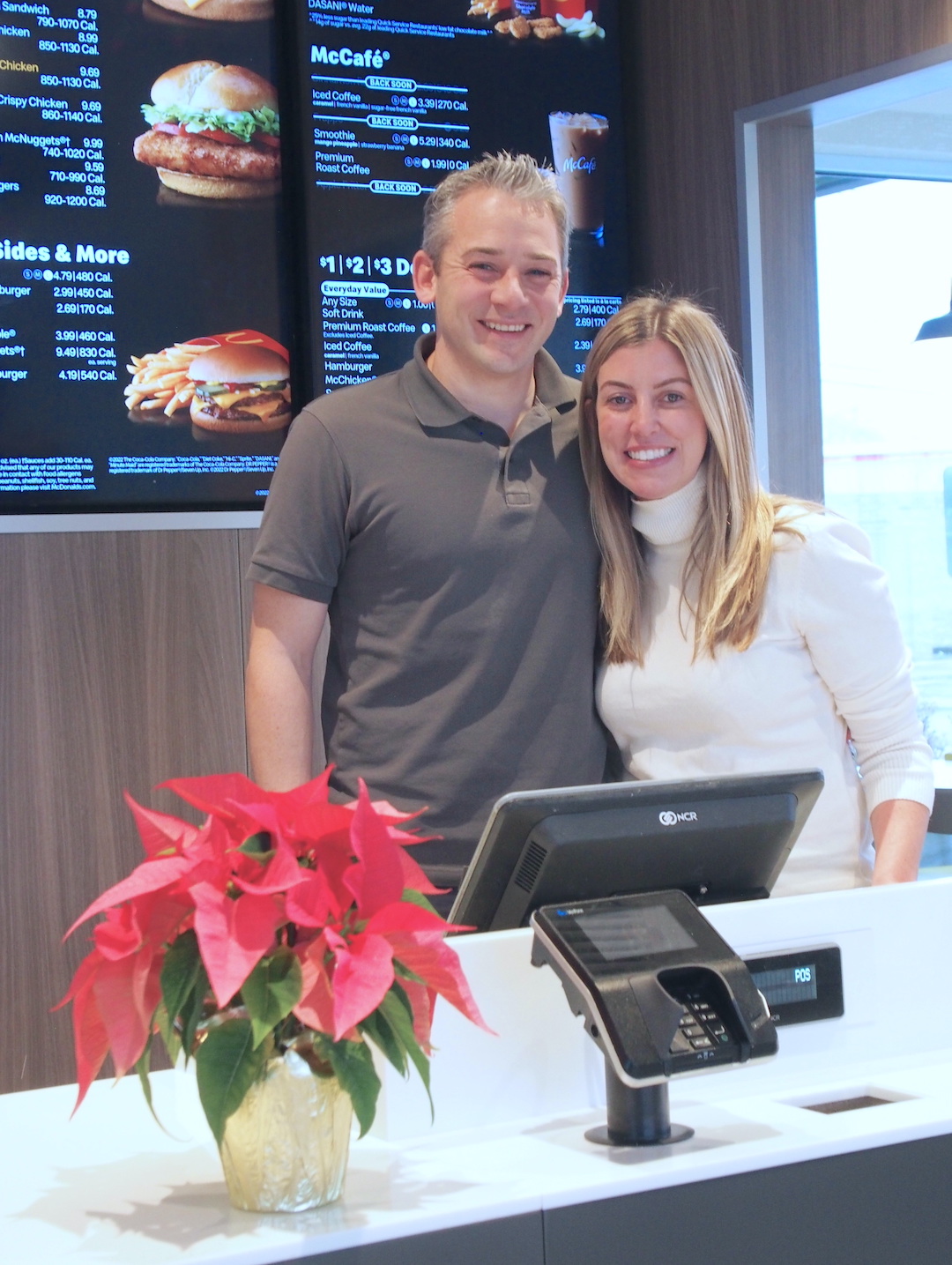 Jeff and Kylie Byrne inside their McDonald’s Restaurant on Grand Island. (Photo by Alice Gerard)

When the Byrnes purchased the Grand Island restaurant, they knew that it needed work.

Changes to McDonald’s have included putting in a new lobby, a new roof, new HVAC, air conditioning, new menu boards, updated technology, and new kiosks, as well as a new shake machine, Jeff said. “Everything is brand new here. We’re proud that we could make it look the way it does.”

In addition, the play place was removed and replaced with more seating.

“The play place has been a big staple around here, but there have been times when there hasn’t been enough seating,” he said. “We don’t get a lot of business in the wintertime. But when summer comes up, seating is a concern. And there was the COVID piece as well. So, McDonald’s decided and we decided to remove the play place, hopefully, providing a better experience. As you can see with McDonald’s, some of them keep it, but a lot have been removed across the board.

“We’re still working out the kinks with everything. There are still issues that we need to take care of. COVID didn’t help that, with being able to get certain things. It was 42 weeks just to get an HVAC in. That’s the reality of what goes on. As much as we want to fix it as fast as possible, as new owners, we can only do so much. We want to make sure it’s done right the first time around to welcome people back.”

Both Jeff and Kylie Byrne agreed that taking care of their employees and the customers is their chief focus.

“We have a customer satisfaction line, so we hear the compliments, the concerns. I think the consistency in quality, what people expect when they come to McDonald’s, is what we are about. We want to deliver on that, as well,” Kylie said. I “think it takes time to build the trust back up with the customers if they’ve had an unpleasant experience, wherever that is. I think for them to know we’re dedicated. We’re going to be here. We plan on being in Buffalo. We’re new owner-operators in the area. We do care about the brand, and we care about giving customers in the community a consistent and solid McDonald’s experience.

“I think, in general, McDonald’s is a great product. If you ask our kids, they will tell you their favorite restaurant is McDonald’s. I felt the same way as a kid. I think as adults, too, we have people of all ages coming in. So, I stand by the brand. I believe in the brand. It’s important for anything you own. You eat it every day. We go to McDonald’s in our car when we’re traveling with our kids. We really believe in the message that McDonald’s brings across, and the food. So, I think that’s important.”

Jeff said that the positive experience that McDonald’s offers is “100% the people: the people behind the counter, the people who work for us, as well as the customers. That’s why I did it. I told myself that I didn’t necessarily want to sit in an office for the rest of my life. I wanted to be part of this people culture. That’s what we’re trying to deliver, not only on Grand Island, but at the rest of our locations. If we put our people first, they are able to put the customers first. It’s a win-win at the end of the day.”

He added, “We’re very excited and very proud of this restaurant. This area deserves it. We have some more parking lot work to do, as well as concrete. During the winter, that’s obviously something we can’t do. But we’re going to get this restaurant 100% where it needs to be and to welcome the customers back.”

The Byrnes are hoping to have a ribbon cutting early in the spring, possibly in March or April of 2023. 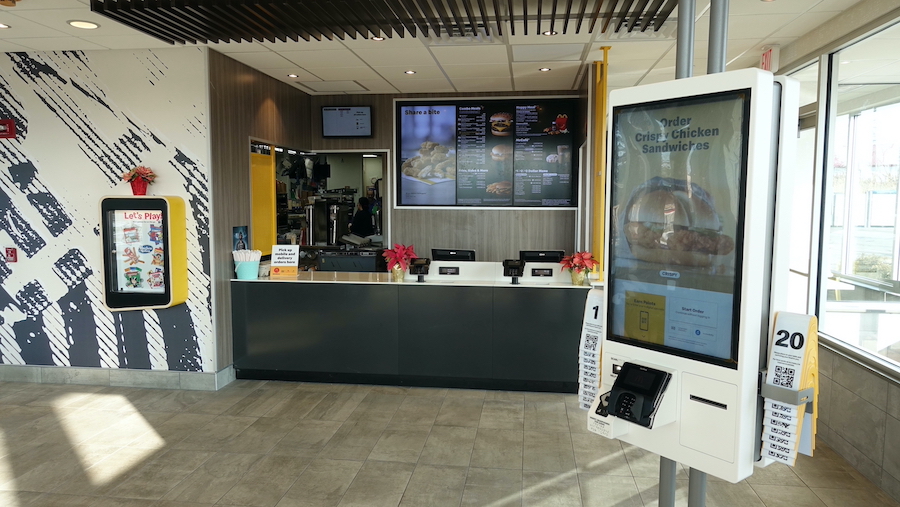 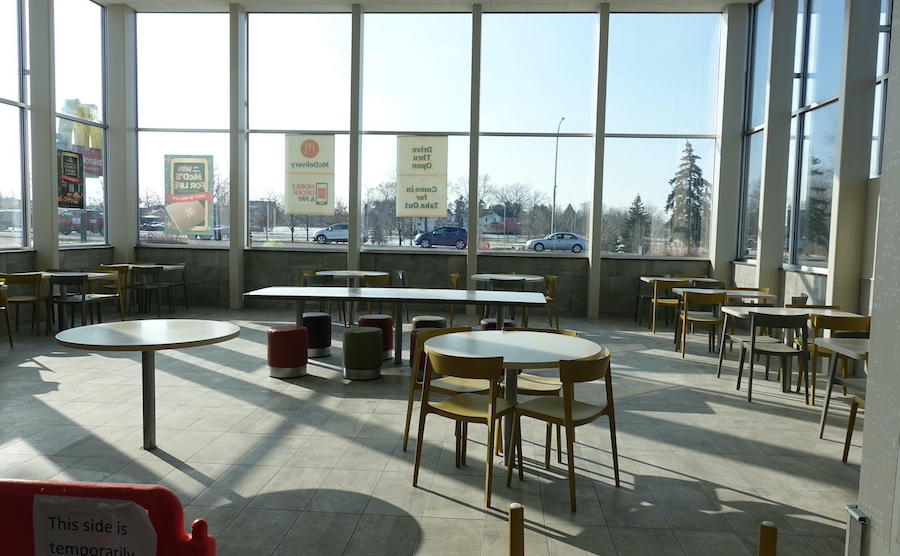