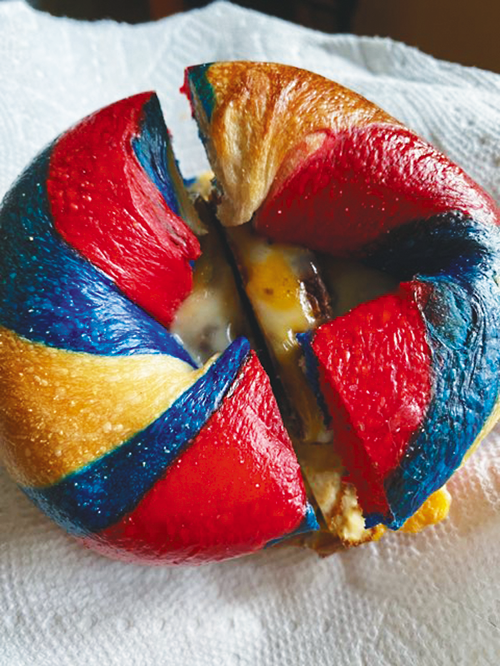 With the team winning its first two playoff games – at home, for the first time in a quarter-century – the team’s red and blue colors are showing up in myriad forms.

Owner Joseph Hotchkiss said, “We’ve done multicolored bagels in the past for things like Christmas and St. Patrick’s Day. And when they made the playoffs, it was kind of like a light bulb that went off.”

Making a Buffalo Bills bagel is more challenging, “as opposed to making one batch of dough, we have to do three separate batches for the two other colors,” Hotchkiss said. “It adds to our labor time, for sure. It’s a more lengthy process. And it’s also a two-day process. We make the dough on one day, and then they rise overnight. And the next day, we boil and bake all the bagels.”

The process been worth it, Hotchkiss said.

“Absolutely. We sold a little over 1,200 Bills bagels this week, which is up. The previous week we sold like 350,” he noted. And, “We’ve been shipping them all across country” – as far away as Alaska. “It’s been fantastic.”

Hotchkiss said the bagels are sold out – but might return if the Bills beat the Kansas City Chiefs this weekend and advance to the Super Bowl.

“I don’t know if it’s going to be next week, because there’s usually a gap between the AFC Championship game and the Super Bowl; so, it’ll be the week before the Super Bowl. We’ll start taking orders – probably,” he said.

The Village Bake Shoppe owner Mike Fiore said Power City Eatery is “a wonderful newer business to the downtown Niagara Falls area.” He lauded its breakfast sandwiches and said it feels like a big-city deli, but with a homey Niagara Falls feel. “Great ownership; wonderful employees; great place for meetings and gatherings, or just have a cup of coffee with someone when exploring the falls. The food is great; the catering is wonderful, as well, to share with colleagues or offices, or as a thank you to someone with their sandwiches and bagels.” 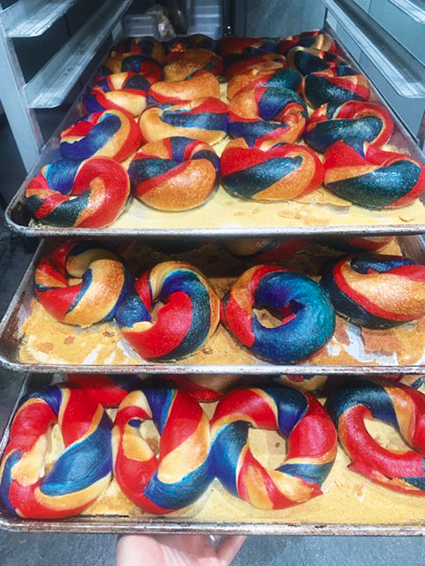 Power City Eatery is open from 9 a.m. until 2 p.m. Monday through Saturday at 444 Third St.