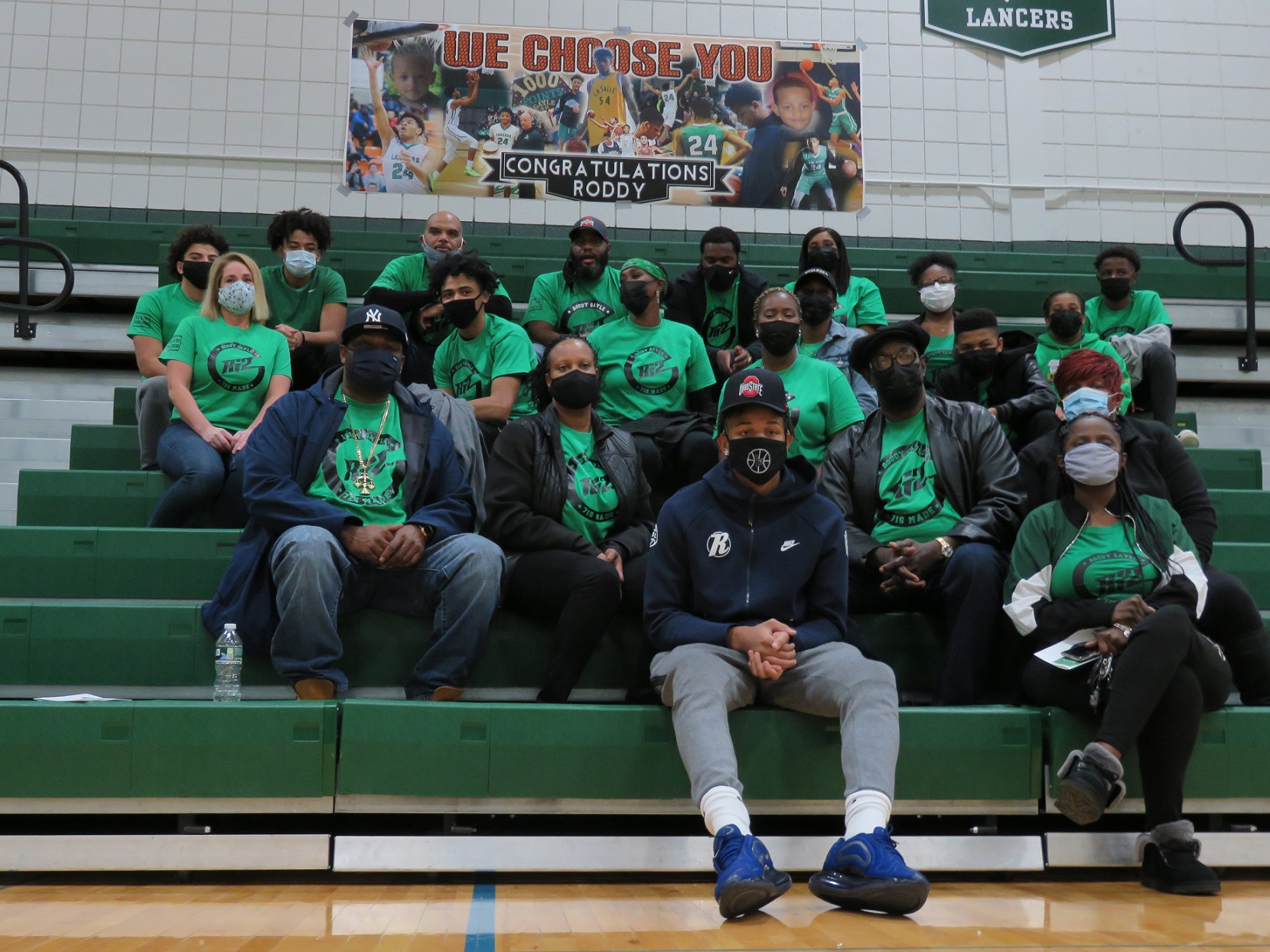 Lewiston-Porter's Roddy Gayle and close family and friends pose in the bleachers under a sign created for Gayle. The Lancers' star committed to the Ohio State University Friday night during a ceremony at the Lew-Port gymnasium. (Photos by David Yarger)

Friday night, Lewiston-Porter junior Roddy Gayle had a big decision to make, but it was one he utmost felt incredibly comfortable with.

In front of a few family, friends, media and Lew-Port administration and coaches, Gayle made his commitment to the Ohio State University during a ceremony in the Lancers gymnasium.

One of the top recruits coming out of New York state, Gayle had narrowed his decision to six schools earlier in the week, which included the Buckeyes, Syracuse University, the University of Connecticut, Pittsburgh, Georgetown and Marquette. After long decision, and sticking with his heart, though, Gayle said he knew OSU was the best decision for him.

“Relationships played a big role in my decision, because between coach (Jake) Diebler and (head) coach (Chris) Holtmann, they called me almost every day. And sometimes, when he wasn’t talking to me, he was talking to my mom or my dad. … I was very fond of that. That definitely helped me come to the decision,” Gayle said.

Additionally, the All-Western New York First Teamer noted that it felt good to know he will become a part of Buckeye Nation and follow players who had played there in the past.

“It feels amazing, it’s like a dream come true. Ever since I was a kid I was looking at guys like D’Angelo Russel and Evan Turner and it’s just crazy that like I see this in my dreams and it’s crazy that in 2022 I’m going to Ohio State to be a buckeye,” Gayle said.

The Buckeye commit grew up in Niagara Falls and he got to watch the likes of Syracuse stars Jonny Flynn and Paul Harris, two high school phenoms in the area who also grew up in NF, as he was a kid.

Flynn ended up going to the NBA with the Minnesota Timberwolves and Harris eventually played in the NBA D-League and overseas professionally. Gayle said, to have his name up in talks with guys like Harris and Flynn meant something to him, especially being from WNY.

“It’s a dream come true. Growing up with guys, it’s all you heard was Jonny and Paul. Now that my name is in the mention, I just want this place to be a place where people can come and realize that there is talent here. So I really wanna put the city and Western New York on the map. We really have some talent here and it can be done and I just want to be an example that we have ballers up here,” Gayle said.

The junior added that he had close conversations with Harris about what playing college ball is like and he said that Harris told him “there will be some bumps and bruises, some up days and down days, but just stick with the grind and everything will pan out.”

Lew-Port boys basketball coach Matt Bradshaw added high praise for his team’s star. Bradshaw thanked Gayle’s parents and said that, despite how talented his shooting guard is on the court, he’s even more talented off the court.

“I can’t thank you enough for allowing me to be a small part of your son’s life. It means so much to me that I’ve been able to be a part of this process,” Bradshaw said to Gayle’s family. “We all know what kind of basketball player he is, he is an even better person, and you can never have enough of those in your school and on your basketball team.”

Bradshaw, in addition to Gayle’s family, guided Gayle in the right directions through his college decision and helped him through some difficult phone calls to schools through the process.

Gayle started his high school career with Niagara Falls High School as an eighth grader. There he helped the Wolverines win the Niagara Frontier League and Section VI AA title. After a transfer to Lew-Port, the freshman continued his success, bringing the Lancers the NFL title and the program’s first Section VI title since 1978. Additionally, he’s been named All-WNY First Team and the MVP of the NFL. In his sophomore season, he surpassed 1,000 career points.

According to 247sports.com, Gayle is the Class of 2022’s No. 76 overall prospect, the No. 7 overall shooting guard and the No. 1 rated prospect in New York.

While the prospects of high school basketball are up in the air for this year due to the COVID-19 pandemic, many are holding out hope that they’ll see Gayle on the court for the Lancers at some point this winter. 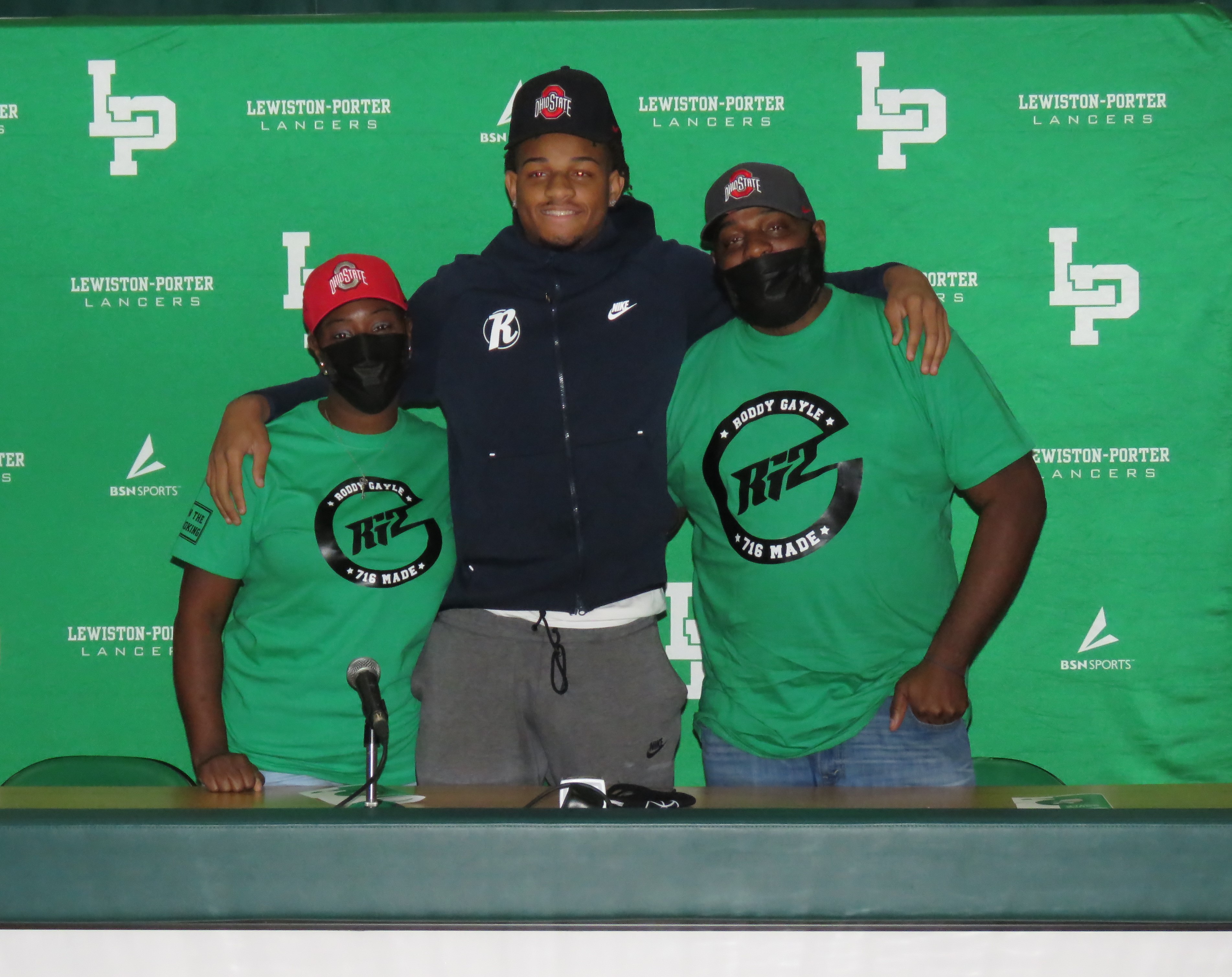