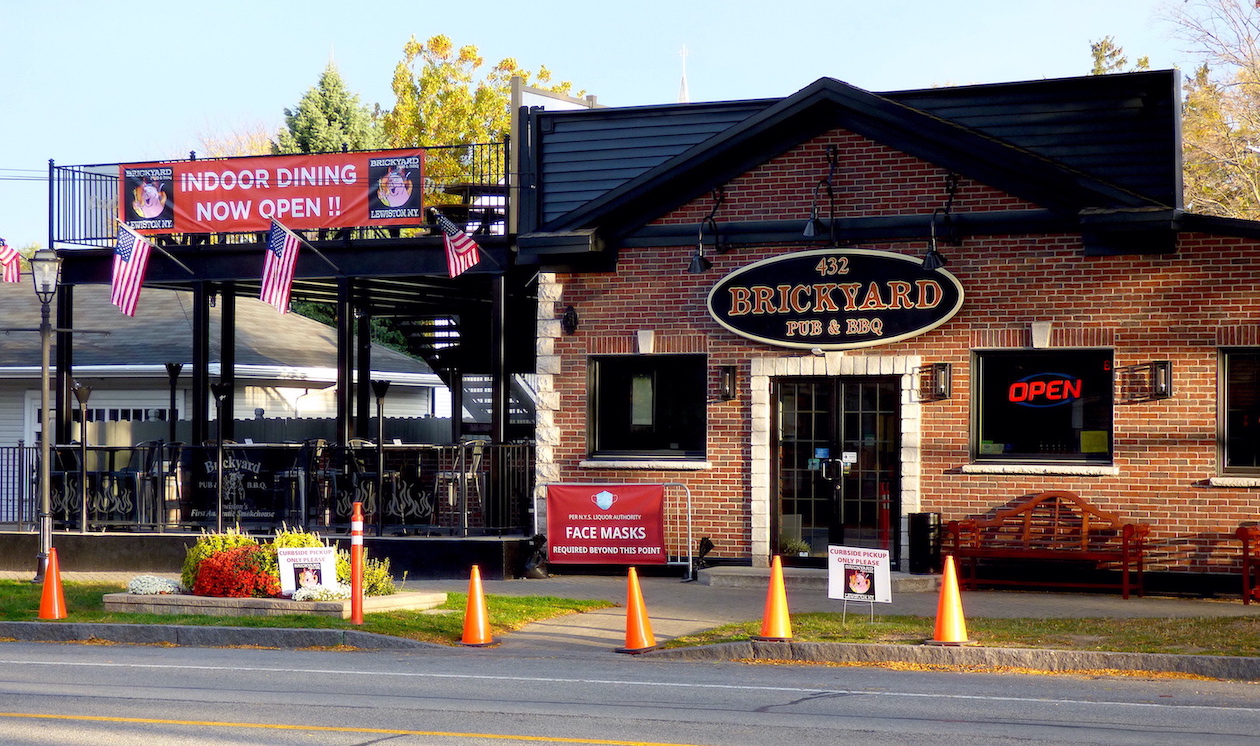 The red letters spell out what Lewiston residents waited all summer to read: The Brickyard is open.

In part three of this series, we continue to look at where some of the largest construction projects stand:

A late-May fire left Lewiston without its modern-day crown jewels, the Brickyard Pub & BBQ and Brickyard Brewing Company, for the summer months.

The fire engulfed the latter, which lost its second floor and won’t return until 2021. Fortunately, the former was protected by fire-suppression materials and could reopen sooner.

As soon as owners Ken Bryan and Eric Matthews were permitted to begin reconstruction, they began in earnest. In fact, their restaurant staff actually beat them to the punch.

At a recent check presentation, Matthews told the Kiwanis Club of Lewiston, “Most of the employees that we have working for us have all come in and helped us do all this. Girls, guys, servers – 110-pound servers that aren’t normally swinging a hammer – there will be pictures in the restaurant of them with work boots on and crowbars and that.” These employees “tore the whole floor … out of this place, which was amazing. We weren’t even there that day, and they ripped it all out and got it to where it’s at.” 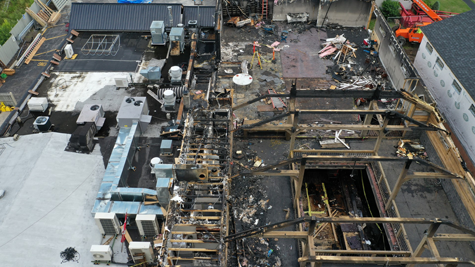 Pictured are overhead images of the BBC after the May fire. (Photos by K&D Action Photo & Aerial Imaging) 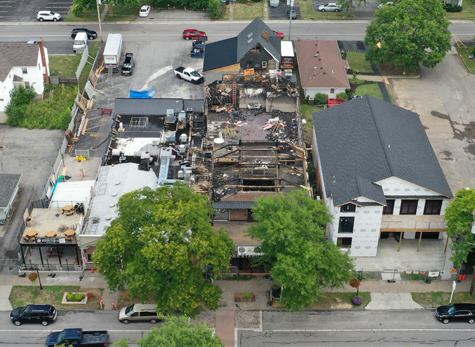 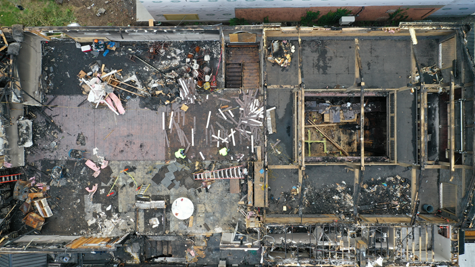 The owners, working alongside GM Steve Matthews and head brewer John Meteer, next set out to expand the adjoining Barrel House, which wasn’t damaged. This allowed them to get back into the beer-making business while the BBC was on the mend.

“So, for us to brew again, knowing that the BBC was going to be out of commission for a while, we put an addition on the Barrel House back there,” Bryan said. “All-new equipment is going into the building. All-new brewing equipment.”

Materials arrived last week, and “We should be, hopefully, up and brewing” by month’s end, Bryan said. “We’ve been fortunate enough; Pressure Drop has allowed us to do some contract brewing there – which has been very kind of them.”

Moreover, “We were fortunate enough to have enough beer in the pipeline that we brewed a couple days before the fire, and we let it sit,” Bryan said. “They were lagers, so we could let them lager even longer. So, we were able to can. Thank you to DiMino Tops, allowing us to sell it over there. The response has been great.”

The BBC’s No. 1 seller, White Bronco, is again on tap at the Brickyard and available for sale in kegs and cans.

The Barrel House in photos 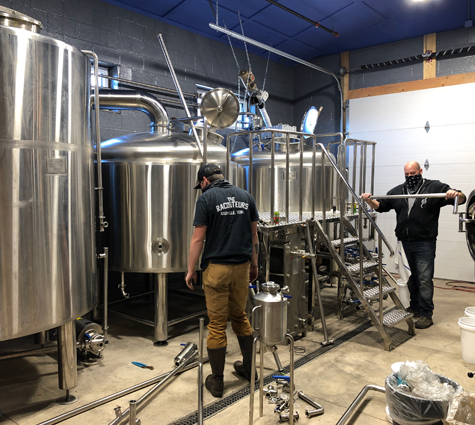 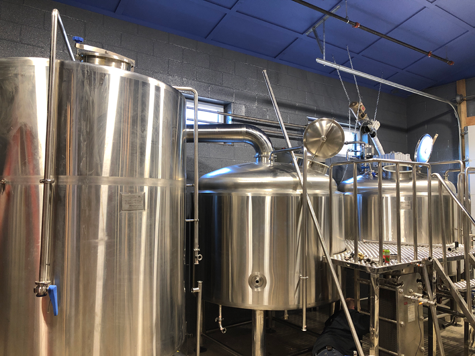 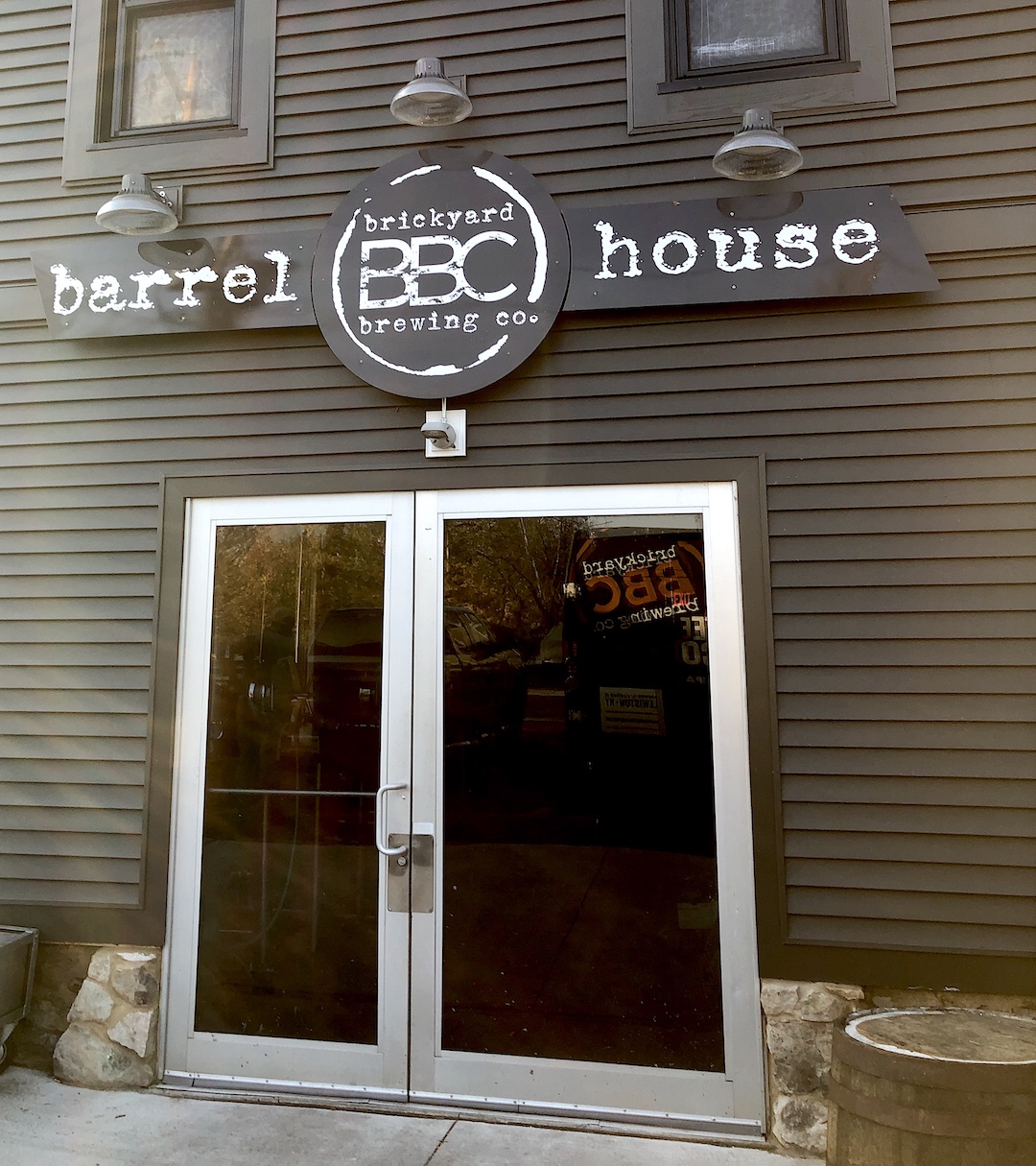 In February, the Brickyard turned 15 years old. Over that time, it has been Lewiston’s most popular restaurant.

But that didn’t stop Bryan and Matthews from putting their own new spin on reconstruction.

He explained, “Pretty much all the wood in the building, and a lot of the drywall 4 foot up, everything had to come out; it had the water damage. New floors, new walls – everything has been specially fire painted and redone.

“So, at that point, the water damage to the bar that was sitting in there, the bottom of the bar was half-rotted, so we ripped that out and decided we’d always thought about putting the bar on that side of the building.”

The Brickyard’s inside bar now backs up against a brand-new patio bar on the other side of the restaurant. The brick wall-bar area is aesthetically pleasing but, perhaps more importantly, it allows bartenders to have a central serving location when patrons are dining inside and outside.

“We figured it was an opportunity to do it,” Bryan said. “We couldn’t open at that point – we still had the roof; they wouldn’t let us put the roof on next door. The grade of the barbecue building was a little bit down from the BBC. So, every time it rained, it just rolled into the barbecue side. We were very fortunate that it wasn’t a rainy summer. But every time it did, it just created another giant mess.

“Once we got that pretty much cleaned up and figured out, we hurried up to get this side done and worked on the outside; and created a new outdoor patio, which customers had always asked for. … The (inside) bar itself is exactly the same size as it was on the other side, we just spun it around and replaced it.”

Though the owners received rave reviews for their BBC design, Bryan said there was some trepidation about changing things up inside the Brickyard.

“You know, there was part of us that we were reluctant to move it, just due to the history of the building and people that have been coming in here for decades, on vacation and whatnot. When they come in, we didn’t want to startle them,” Bryan said. “So, we tried to give it the appearance of it just flipped around when we moved the garage door and the bar.

“Believe it or not, there’s been people that came in that didn’t even realize it had moved to the other side! People that hadn’t been in here in like, you know, five years or whatever, and they’re like, they had to think about it for a little bit.”

Overall, Bryan said customers have been pleased with what they’ve found since the restaurant reopened after Labor Day.

“The customer responses, everyone’s just been great,” he said. “They all love it.”

He noted, “Some of the tables are pushed a little bit together more for the COVID reasons, so it creates a more open atmosphere.

“So far, so good. I don’t think we’ve actually had anybody come in and really, I don’t want to say complain or was upset that it had moved. There’s older people that have been coming in here for 15 years that came in and loved it. Like, ‘Oh, it’s nice to see change.’

“You’re reluctant, sometimes, to do too much change in a small town with a history that it has. It’s been good so far.”

Bryan said he and Matthews are “Looking to do even more renovations, probably next spring. Maybe this fall, depending on the weather. We’ll see what happens.”

The outdoor patio will receive new siding, and seating there may be reconfigured, too.

New and improved Brickyard in photos 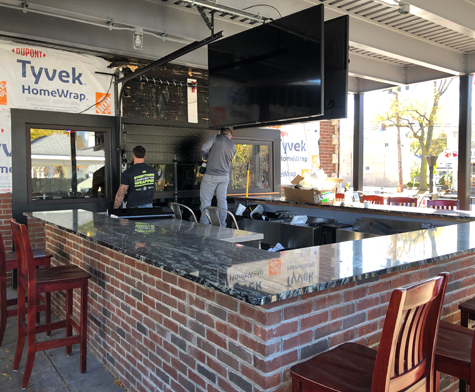 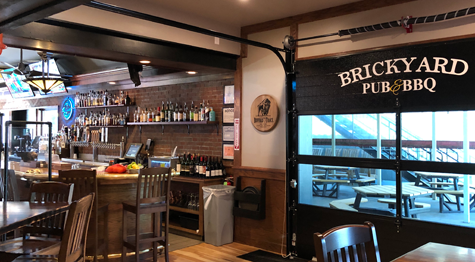 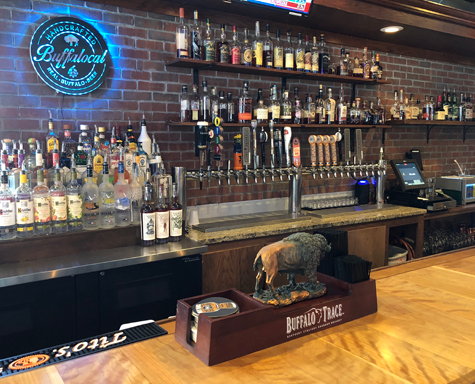 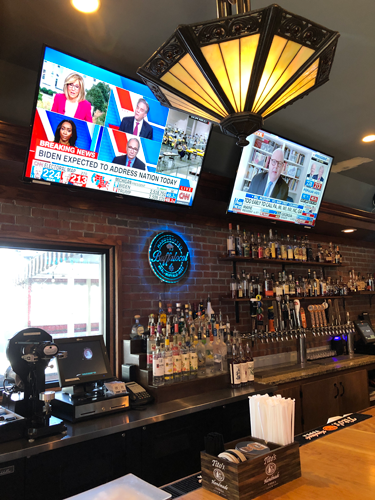 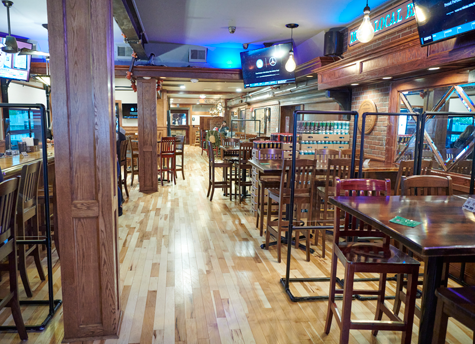 A roof was recently placed at the BBC, and painting has begun on the ground level. Copious amounts of water were removed, and “We’re going full steam ahead next door – as fast as we can, with supply chain issues from equipment to materials to labor, getting people in to do the proper work,” Bryan said. “We’re going as quick as we can.

“There’s no giant push, fortunately, right now, because the majority of the upstairs was banquet facility. It doesn’t look like there’s going to be banquets in the foreseeable future here. So, we’re going to concentrate on downstairs, hopefully get that back up and running, and then worry about upstairs maybe a little later in the spring.”

The BBC kitchen will stay in the same spot, but the brewing barrels – which could be seen through a glass wall as patrons sat and ate at specially carved tables – moved out of BBC and into the Barrel House. That showroom, if you will, is expected to be used for small gatherings or group meetings.

In the walkway that connected the two restaurants, a cooler was removed and will be replaced with a themed merchandise area.

Upstairs, there will be some changes in the bar configuration. A step-down in front of the banquet room will be removed, as the floor is leveled off. Bryan said the team is hoping to find a new place for a mural (sadly, the Niagara Region painting was lost in the fire), and to return the remarkably still intact stained glass windows.

Additional windows and doors are on the way, and adjustments to the patio and entrances are expected.

All told, the BBC will be fully remodeled and reopen in 2021. 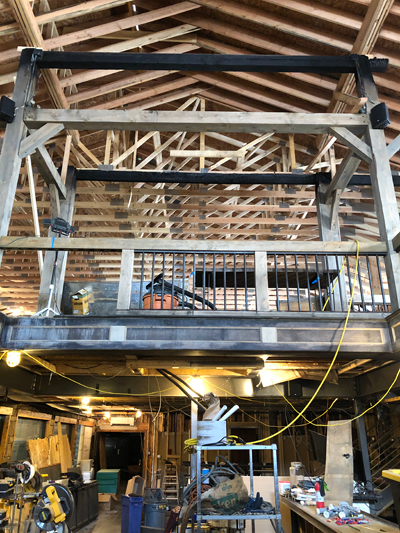 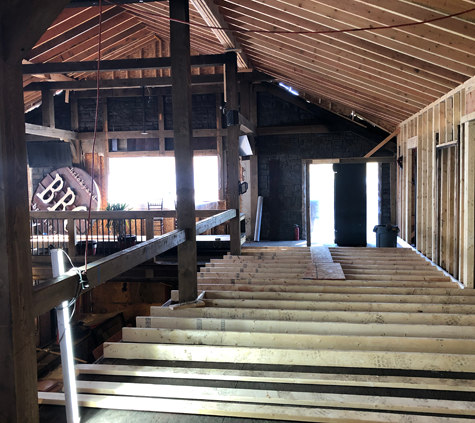 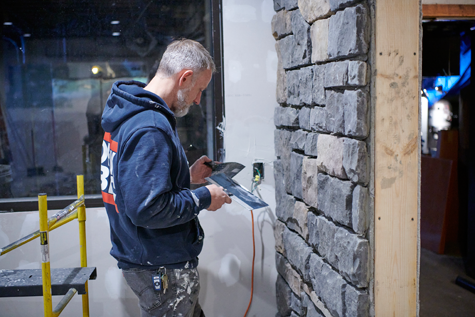