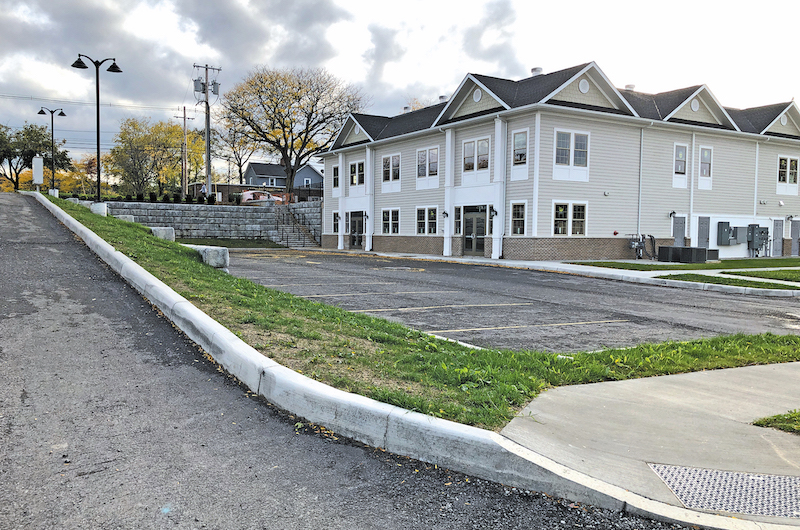 Village of Lewiston mayor has confidence in developers

Here’s where some of the largest construction projects stand:

A portion of the new plaza at Center, North Eighth and Onondaga streets opened earlier this year, as Quest Diagnostics moved into the first floor of building No. 2.

Project partner Jeff Williams said, “We put a roof on the back building (No. 3), and we’re working on tenants.”

Tim Hortons management recently received approval for signage on building No. 1, and stated the goal is to open for service by year’s end.

Ellicott Development purchased the land in 2012 and partnered with Williams on the plaza project. The two then joined with Bill Game to purchase the Frontier House in February 2019.

It’s anticipated work will resume there – at Lewiston’s nearly 200-year-old “crown jewel” – in a few weeks.

“We’ve done some engineering and architectural work, and I believe that they went out to talk to a couple masons to do some pointing before winter. So, I’m sure you’ll see something,” Williams said. 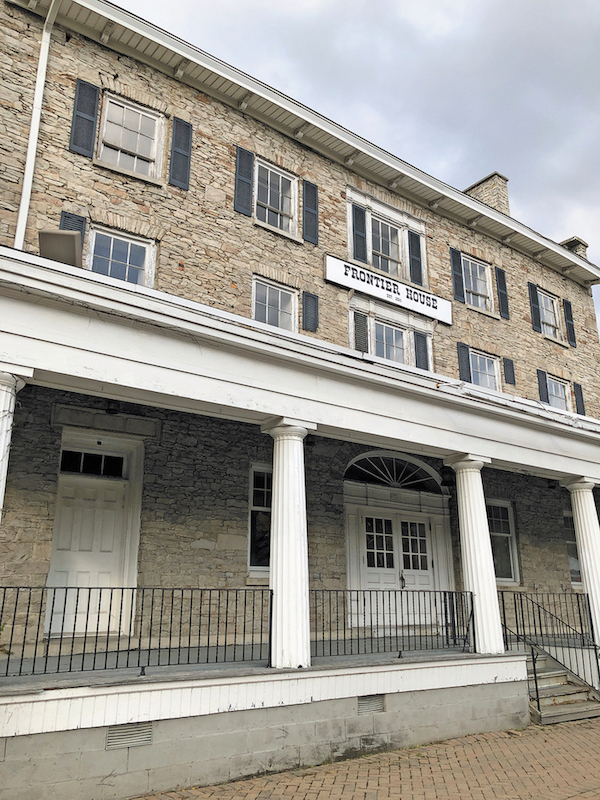 Village of Lewiston Mayor Anne Welch has spoken with Ellicott Development CEO Bill Paladino, and “He’s had a lot to do with this whole pandemic, trying to get back on track,” she said.

“I think he’s probably in a place now that he’s got everything else kind of going, and that he can start working on the Frontier House,” she added.

Prior to the purchase of the Frontier House, the Village of Lewiston was pressing the former owner to make exterior renovations – even going so far as to initiate Town Court proceedings.

Welch said the situation here is different, because, “If the pandemic hadn’t shut everything down, the work would have started on the Frontier House a long time ago. But with the pandemic, I mean, they couldn’t get material, they couldn’t get workers, everybody was shut down to 50% or less. And then the workers were on the unemployment. … That’s a lot to deal with. …

“Bill Paladino has a lot of property to deal with. It probably was a nightmare for him, trying to keep everything going and getting the workers and everything else.”

“They have to match the mortar and everything so it looks historical,” Welch said. “There’s a lot involved in taking care of that. I know he met with (the New York State Historic Preservation Office). He said he had a very good meeting with SHPO. He was doing what he was supposed to do. It’s just that, the timeline, you have to wait.”

“I know he’s going to do a great job once he gets going,” Welch added. “That’s just the way he is. I have a lot of faith in him.”

As far as the plaza goes, and landing tenants, she noted, “Businesses are still suffering.”

“The thing is, who wants to (say), ‘I’m going to be the big tenant, because we don’t have any money, but we’re gonna move into there and hope for the best.’ Everybody kind of had to settle out and see how this COVID thing was going to do. If we’re going to go back into lockdown, who wants to open a business? There’s a lot to be considered.”

Still, Williams said residents “should not be concerned about anything,” with regard to the pace of construction or progress on the plaza or Frontier House projects. 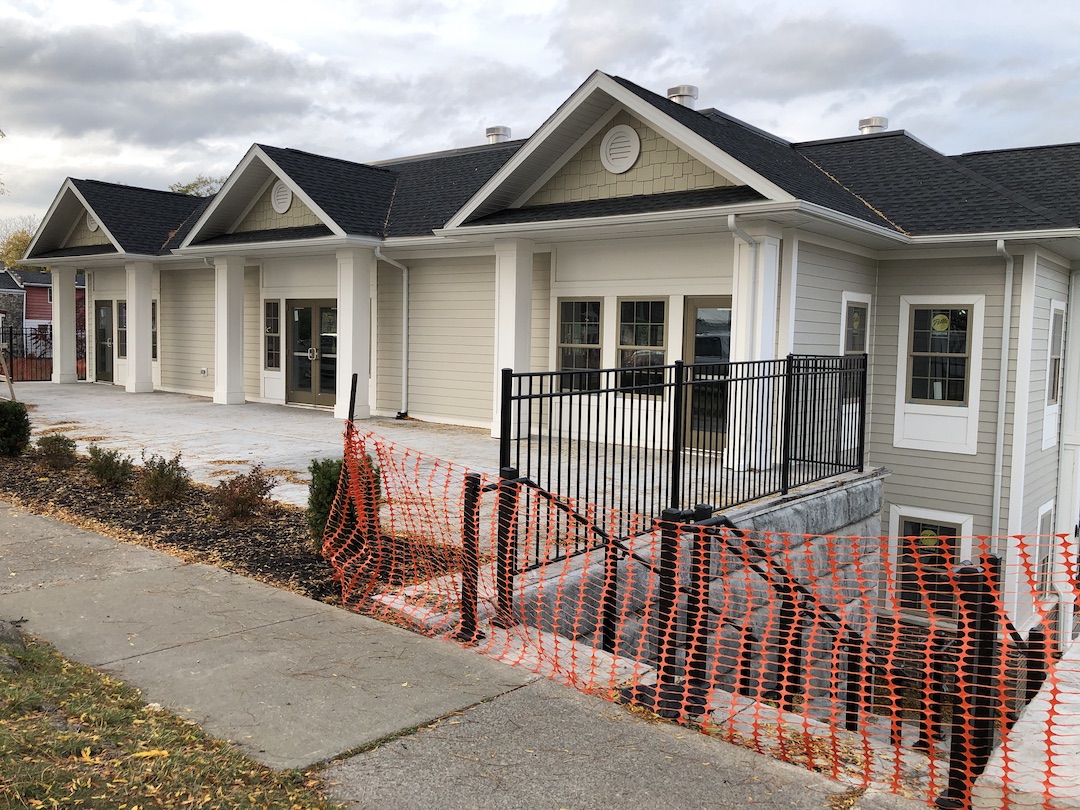 The Ellicott Development plaza at Center, North Eighth and Onondaga streets. This is building No. 1. 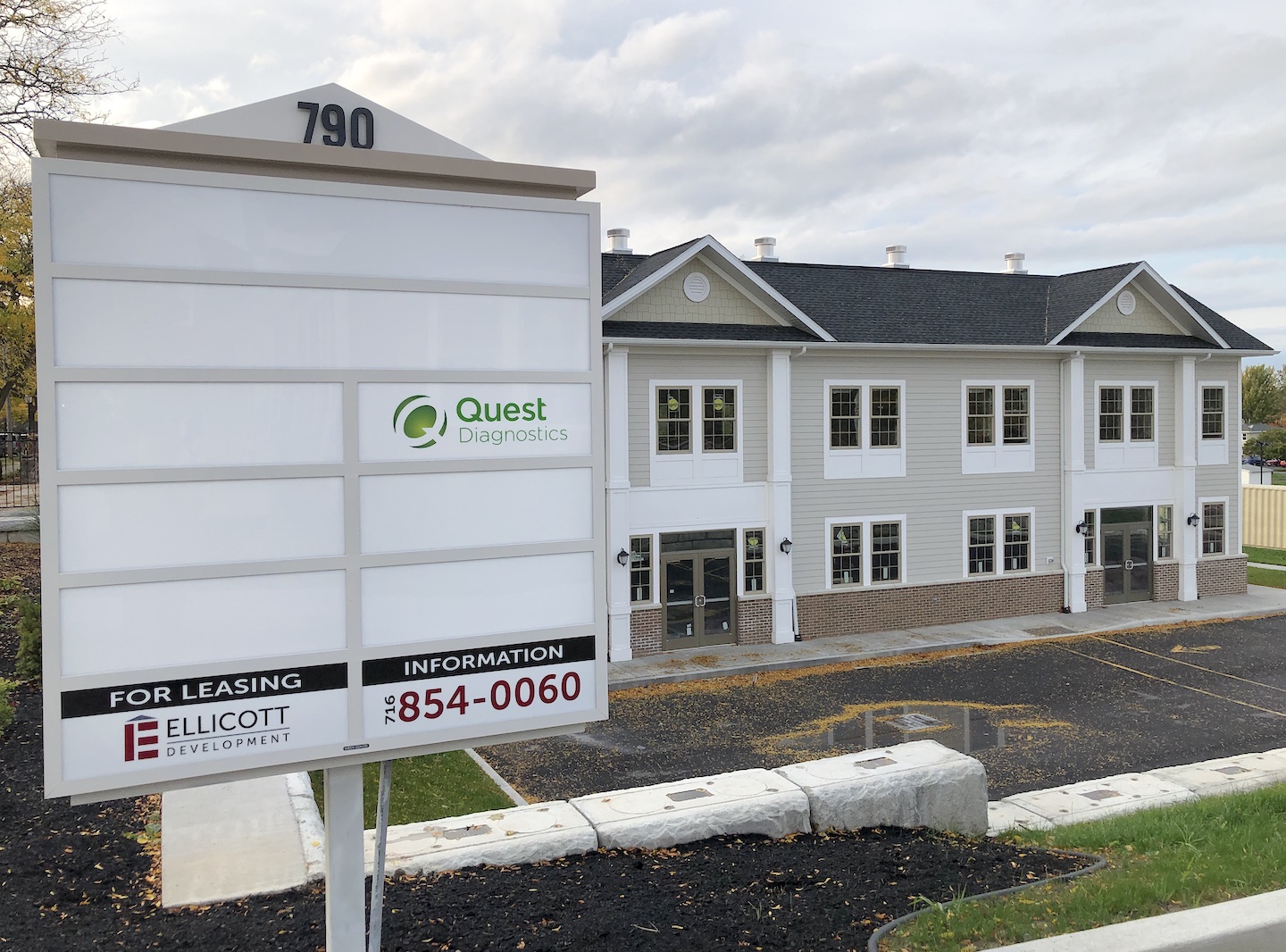 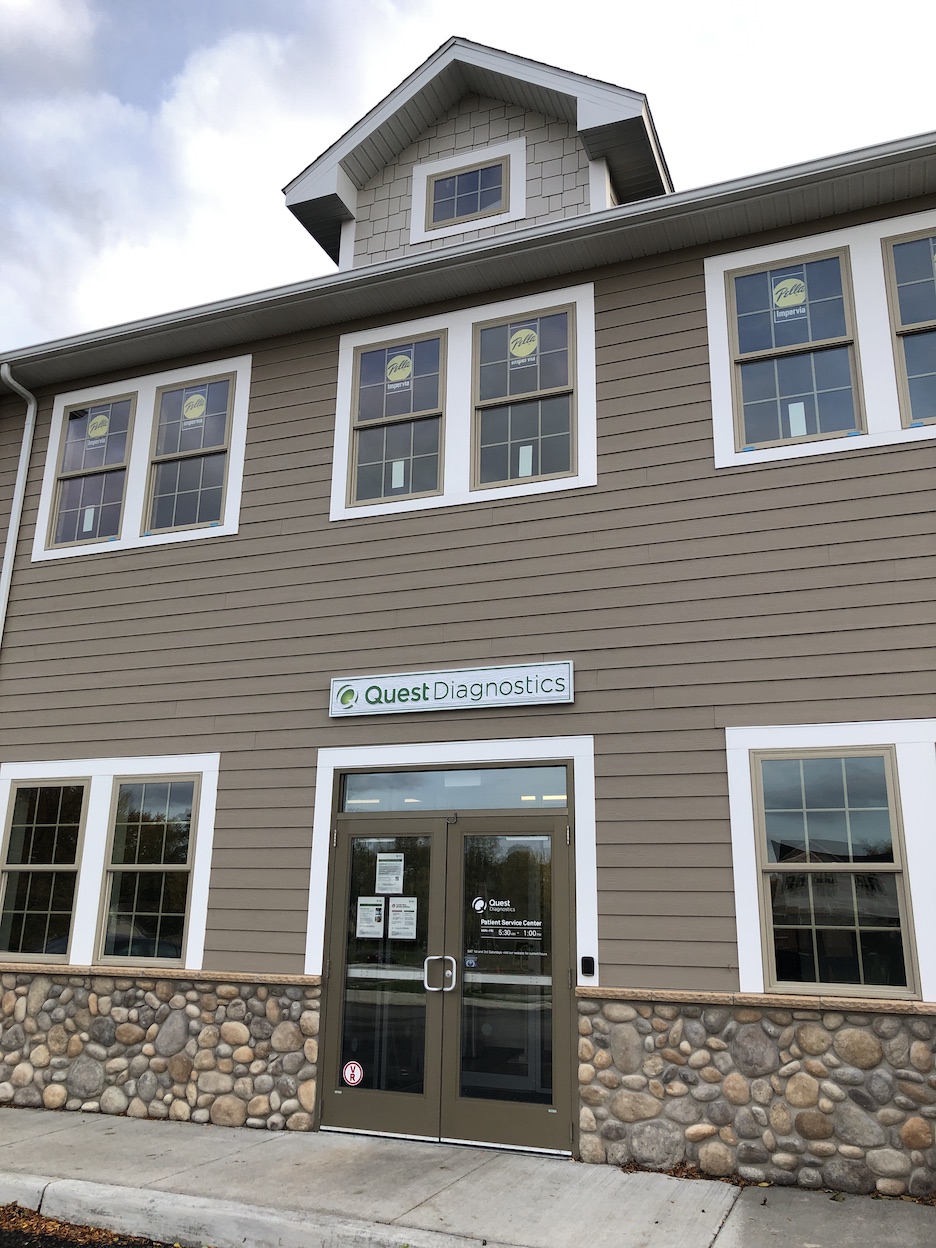 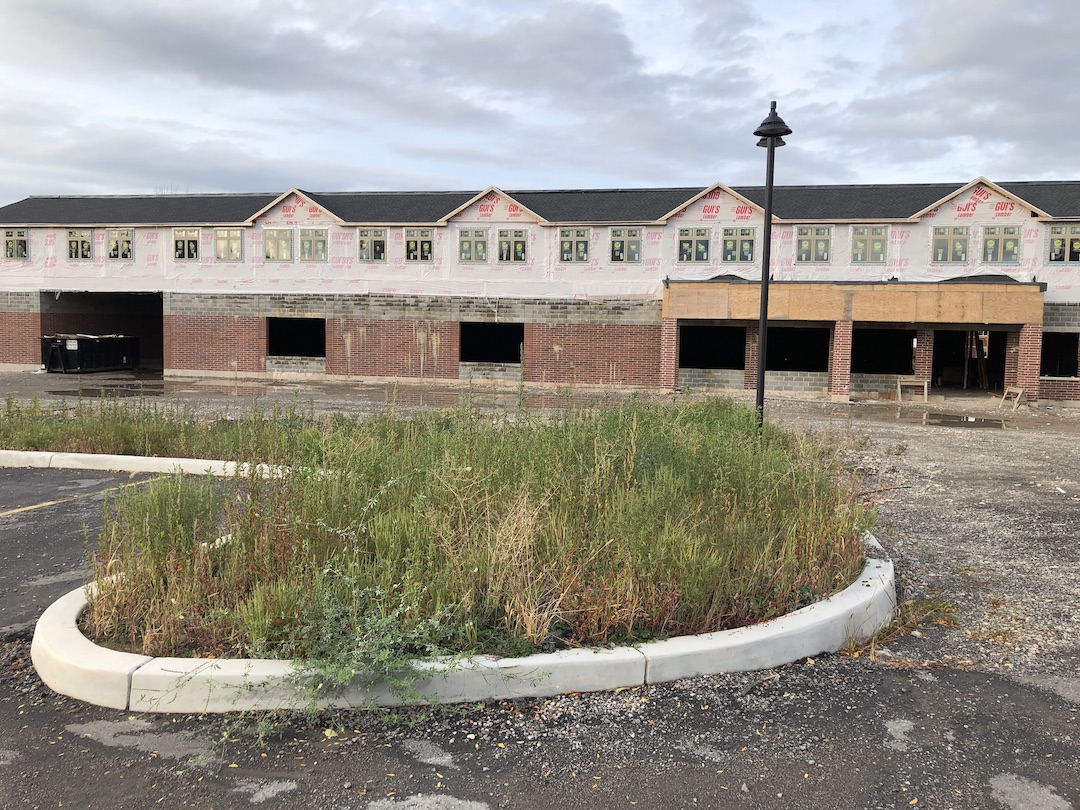 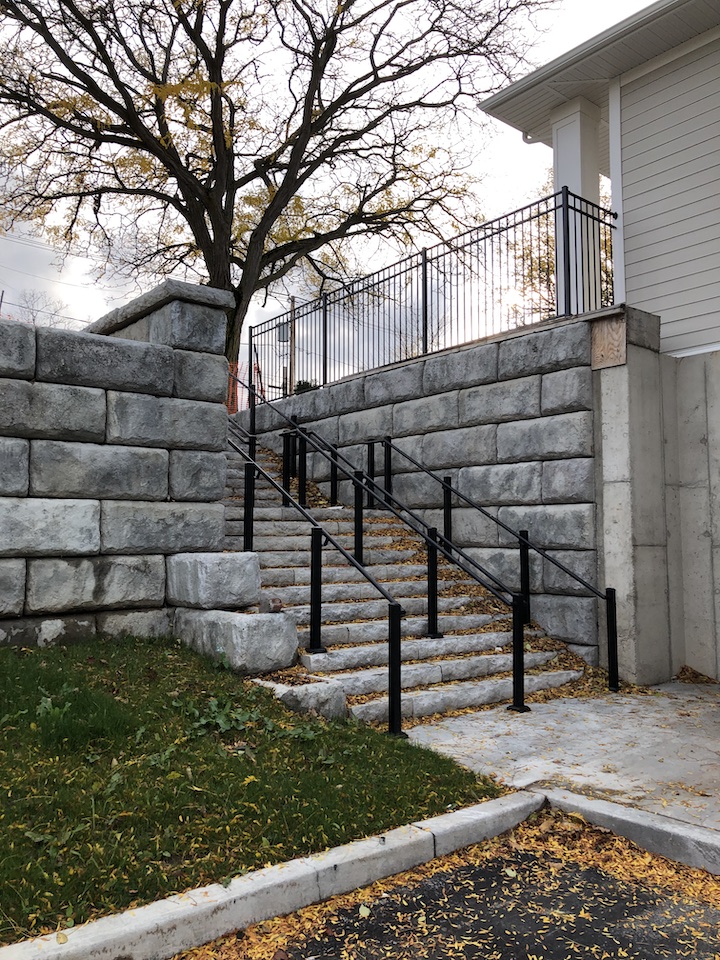 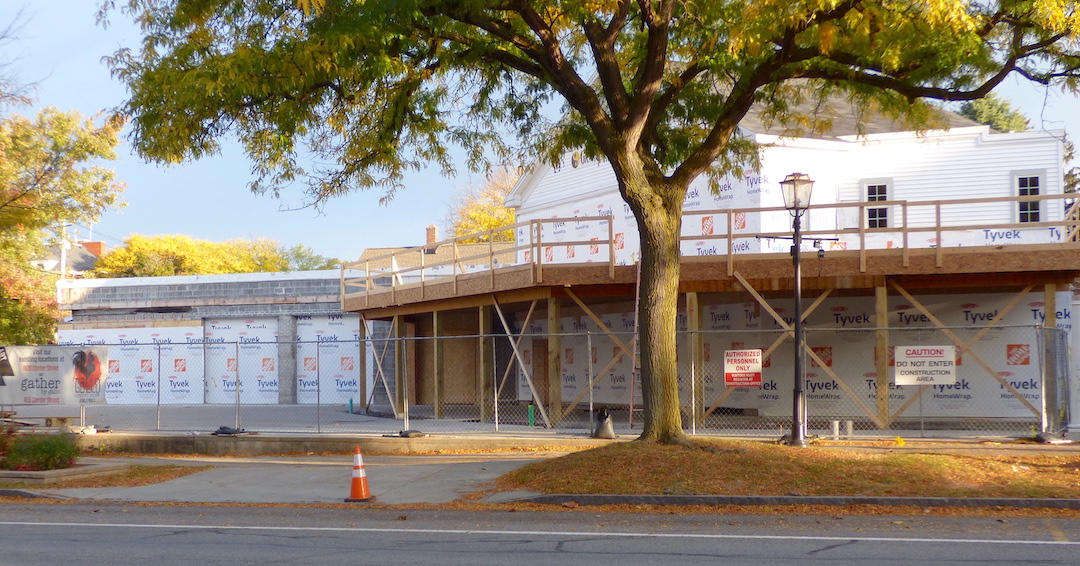 The most noticeable work has taken place at the corner of Center and North Fourth streets. Michael Hibbard, who owns and operates Gallo Coal Fire Kitchen and Gather by Gallo, is converting the former Grandpaws Pet Emporium/Brewed and Bottled/Sgt. Peppers buildings into a third Gallo.

“So, right now, you’ve probably noticed the covered area that we had built. That’s pretty much the only exterior work or addition that we’re putting on as of now. And that, it will house the exterior bar,” Hibbard said. “And then, interior – where no one really has seen all the work that’s gone on inside – is where we’re pretty close to getting drywall up. All the rough plumbing is done. The walls are all framed, and the heating and cooling is probably 50%, and the electrical – the second floor is done, but the first floor needs to be finished. So, we’re pretty close to drywall, as of this point.”

The two-story building will house the main eatery. Work recently began on a second-level deck.

“If you’re facing the building now, it’d be the west side – the side facing the river – will be a Gallo Pronto concept,” Hibbard said. “That’s going to be around 1,200 square-feet; and that’s going to be quick service – you’d come in, you grab a sandwich and go. Salads, coffee – kind of like a mini-Panera Bread style. And then the rest of the building is going to be Gallo. First floor restaurant and second floor banquet facility.”

Surrounding the building, “The courtyard itself is going to incorporate some exterior sculptures, and we have some other ideas with incorporating Artpark and Castellani and have them involved in trying to showcase some artwork from the community in the courtyard area,” Hibbard said. “And then the (corner) area that you’re talking about, that’s going to be finished off. … It’ll be mostly for if you wanted to do an exterior party. That could be rented, and we could set up a party outside.”

The coal fire kitchen – and its signature pizzas – will ultimately move to this spot, while the original Gallo is expected to switch to a Mexican grill.

“It’s probably going to be spring,” Hibbard said when asked for a timeline. “We want to be open, obviously, before next summer, so we’re hoping the first quarter of 2021. So, maybe towards the tail-end of February, March; that’s our goal, at least.” 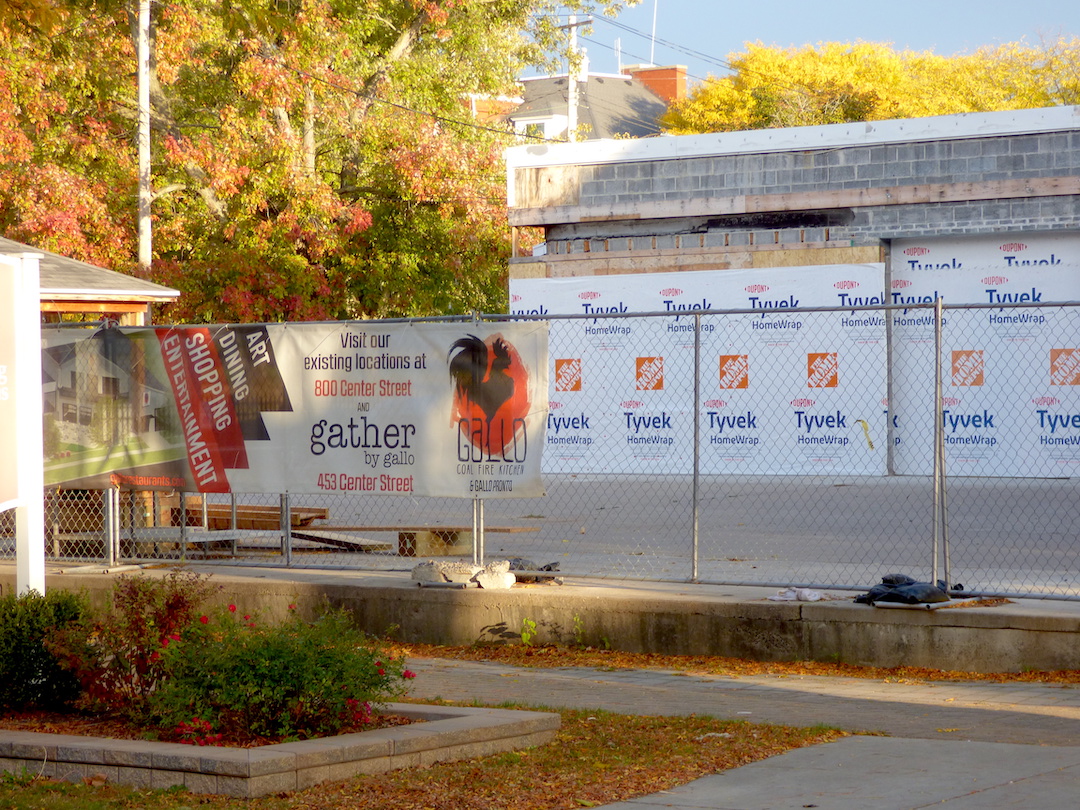 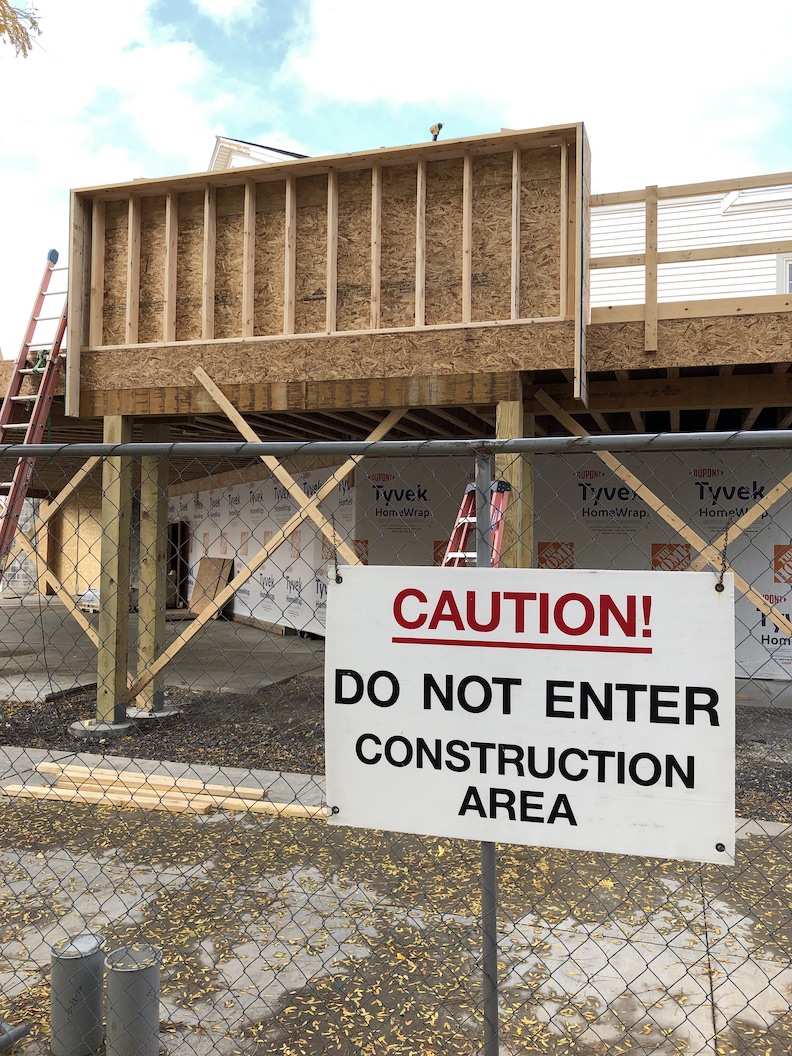 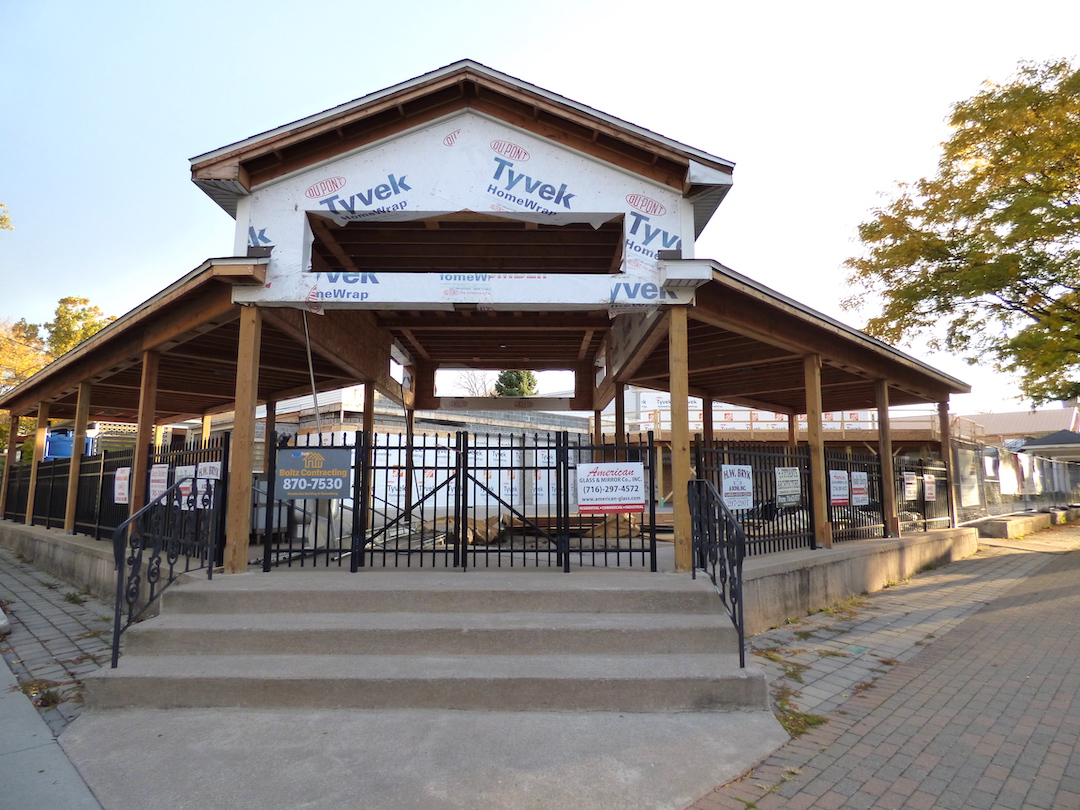 This is what 402 Center looks like now (above) … and what it’s expected to become over the next few months (below). (Rendering courtesy of Fittante Architecture).

In the meantime, patrons can continue to eat in or order takeout from Gallo and Gather.

“They’re actually going very well,” Hibbard said. “We’re pleasantly surprised with the reception of people. Our takeout business has grown substantially at Gallo. With Gather – it’s actually a good problem to have – but we can only accommodate so many people, especially on the weekends. We have to turn some business away.

“But the biggest scare right now, with both of those locations, is exterior seating” as colder weather approaches. “So, we’re trying to come up with some different ideas.”

Gather, which offers burgers, steaks, seafood and salads, opened just before COVID-19 closed society. Upon restarting in the spring, Hibbard said the response from diners has been positive.

“They’re really enjoying the food, the atmosphere, and our bar is really one of the things that people are kind of gravitating towards,” he said. “But like I said, with restrictions, we’re kind of limited on what we can do with seating capacities. But, for the most part, I think people are just wanting something new in Lewiston, and we’re able to achieve that by opening up Gather.”