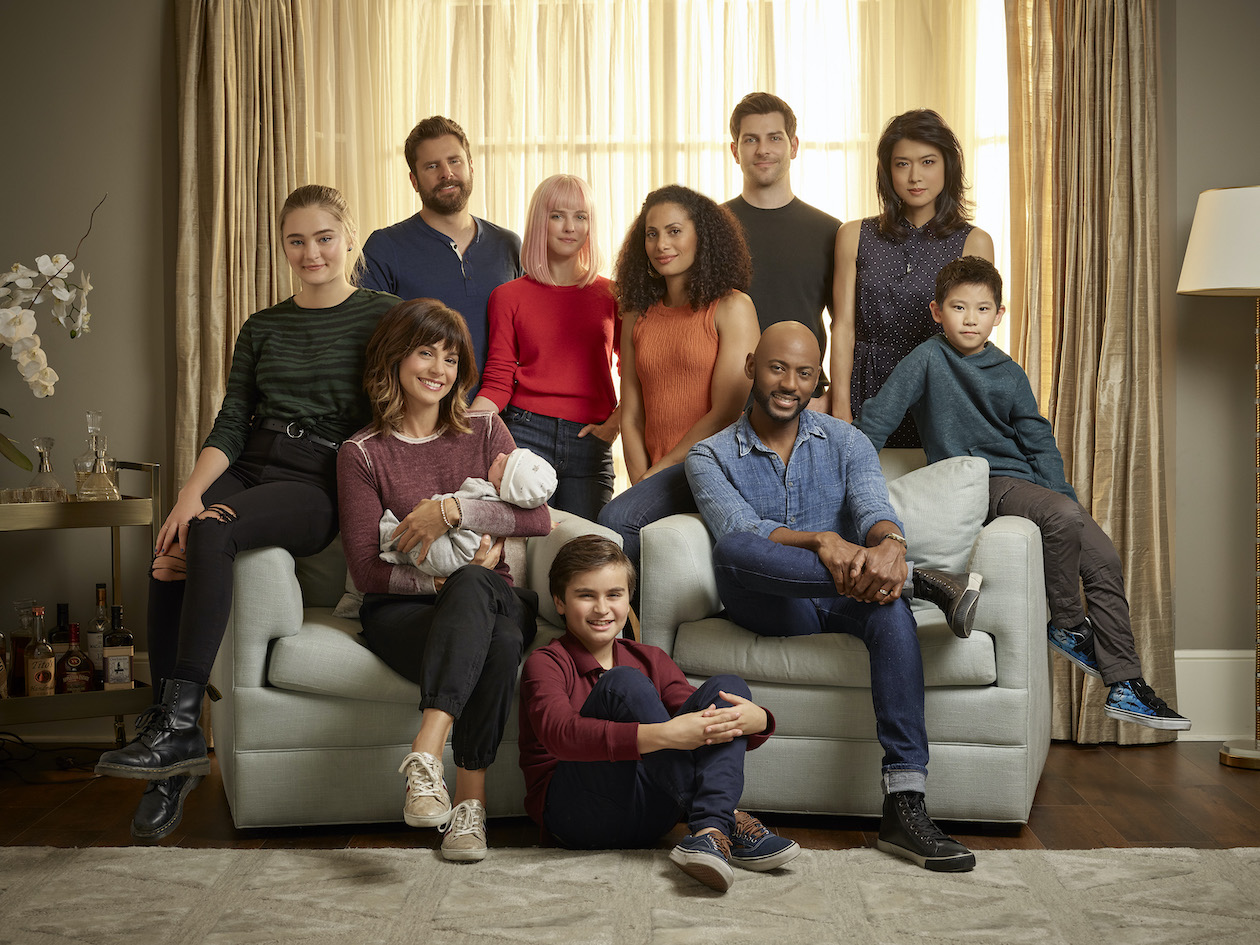 In a season one tagline, ABC said friendship is “A Million Little Things.”

The truth is, many shows fail because they have a million little things.

What “A Million Little Things” has is two things – and these things showrunner D.J. Nash and his crew do better than any other show on TV. It has stars who are not stars, and a storyline that effortlessly leaves viewers desperate for five more minutes each week.

David Giuntoli led a large cast on “Grimm,” as did James Roday did on “Psych.” Grace Park was a lead on both “Battlestar Galactica” and “Hawaii Five-0.” Romany Malco spent seven years on the critically acclaimed “Weeds,” while Stephanie Szostak squared off with Robert Downey Jr. in “Iron Man 3.”

This is a group of actors who could easily marquee any number of projects across networks. … But which one is the star on “A Million Little Things?” Not one of them – and all of them!

And that’s not even including Ron Livingston, the iconic star of “Office Space,” whose character died in the first episode!

Talk about checking your ego at the door.

But that’s the first thing that makes “A Million Little Things” so great: There’s no “B story.” Ten regular cast members, and each and every one of them gets to play an interesting character with an essential (and welcomed) piece of the overall story.

And that overall story is the second thing that sets “A Million Little Things” apart. It’s not an action-adventure, or a procedural, wherein we know the good guys will oppose the bad guys, some sort of fight will occur, and good will probably win in the end. (See: Main character dies in episode one). It’s different tales of a diverse group of people working to maintain their friendships and support each other through life’s worst days and greatest joys.

Somehow, someway, Nash and his team manage to tell that story in a way that keeps the audience engaged, surprised, frustrated, and on the edge of its seat. Every. Single. Episode.

In season two, the group has come to terms with Jon’s death (mostly), and encountered new challenges: Namely, mending Eddie (Giuntoli) and Katherine’s (Park) marriage – even as she learns Delilah’s (Szostak) new daughter, Charlie, is Eddie’s – not Jon’s.

Katherine, a lawyer by trade, was “the responsible parent” in season one, with a steady job (Eddie is a failed-ish rock star) and a straight path for son Theo (Tristan Byon). Eddie is a recovering addict – and, yeah, he cheated with his best friend’s wife.

Roles have somewhat reversed of late – no, Katherine’s eyes aren’t wandering, but she quit her steady law firm gig to fly solo. Eddie has become a producer, mentoring a new music maven and making money in the process. Plus, he’s super supportive of a still-adjusting T.

The two made up and made peace with Delilah – and even intend to renew their vows.

It's just that, well, Eddie’s also-an-addict sister, Lindsay (Sprague Grayden), happened to reappear. … And, OK, maybe she reminded Eddie of a wild night at the lake when they were younger. … Where he, maybe, possibly, I don’t know – killed someone (trouble is, he doesn't know; can’t remember he was so intoxicated that night).

See what I mean?

This show is good.

Giuntoli chatted with BTS ahead of the season two finale (10 p.m., ABC). An edited Q&A follows. 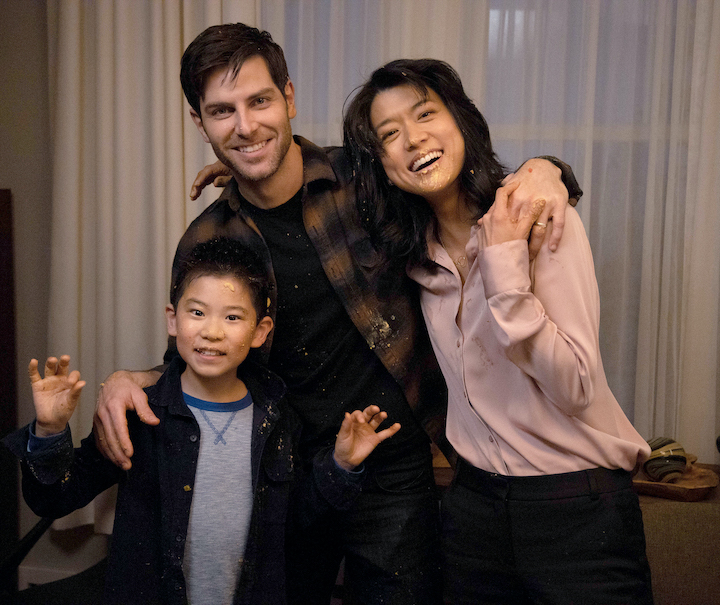 “A Million Little Things”: Eddie (David Giuntoli) and Katherine (Grace Park) are in a much better place this season … as seen in this food fight with their son, T (Tristan Byon). (ABC photo by Jack Rowand)

Q: When “A Million Little Things” was first being presented to the media, a lot of people were saying, you know, it's sort of ABC’s “This Is Us.” … They so undersold the premise of this show! So, my question is what first impressed you about this – was it the script or was it the cast – or was it a combination of the two?

David Giuntoli: I was the first one cast on the show.

Q: So, you were impressed with yourself then, of course.

David Giuntoli: I was impressed with their decision to hire me, first and foremost, he quips.

So, my wife, Bitsie Tulloch (also of “Grimm” fame) … she is a Harvard graduate, and she has the ability to sort through an ungodly amount of information very quickly. She read, I think, 70 pilots that pilot season, and graded them all, and wrote down characters that I should go for, and that she should go for it. So, I'm like, “Thank you for doing all of that work for me, darling, you're fantastic.” And at the very top of the list was “A Million Little Things.” Role? Gary.

But I got Eddie!

She and I were such a huge fan of the scripts; it was clearly of the top two or three scripts in all of the 2018 pilot season. I went after it very hard. And I was offered the role of Eddie Saville.

It was the writing, and the premise, that really struck me and grabbed hold of me. And, as we started getting cast members, I was just delighted. It’s such a quality cast.

Q: And that’s what I want to ask you about next. The two things that really, I think, put the show over the top for me, one of them is – if I go back to “Grimm” – “Grimm” did a great job of keeping everybody involved – and you had a big cast. It did a great job of keeping everybody involved but, at the end of the day, you were the main star, and the story, ultimately, filtered through you. But with “A Million Little Things” like, literally, there's no main star! Every single person, from week to week, is the star, and everybody has a rich and full storyline.

How is that possible, and what do you like about that approach to the storytelling?

David Giuntoli: You're right. On “Grimm,” Nick was the central character, even though he had an incredible group of actors and characters around him.

I, David Giuntoli, could not do that again. It was so much work, and on a show like “Grimm,” you know, the night scenes are filmed at nights. And it takes four hours to film one page, so I was always jet-lagged. You know, the cast and crew were always exhausted, and it was basically Russell Hornsby and I knew we were going to be fighting somebody in the woods every Thursday and Friday night, up until Saturday morning.

I remember I had these blue-blocker sunglasses in my car – and I gave a pair to Russell – so that my eyes would not adapt to the daylight when I was driving home from working, Friday night at like 5 a.m., so I could, like, trick my body into going to sleep.

I really wanted to be in an ensemble show. This was perfect. I wanted time to work on my material, as opposed to getting it and just doing whatever I can as I'm getting it. And ensemble has allowed me to do that, to go to work on my episode, and then come in and shoot it. So, I felt like I could give it my all.

And how do they keep it so there's no central character? I think that, weirdly, the central character on our show died in the first five minutes. And that was Jon, and he would have been the quote-unquote “lead” of the show. But, as it happens, the lead died at the end of the teaser for season one. So, it's the rest of his friends coping, and going on with their lives after that moment.

And it was a premise that was so well designed by D.J. Nash that, I think, the setup did most of the heavy lifting for him. 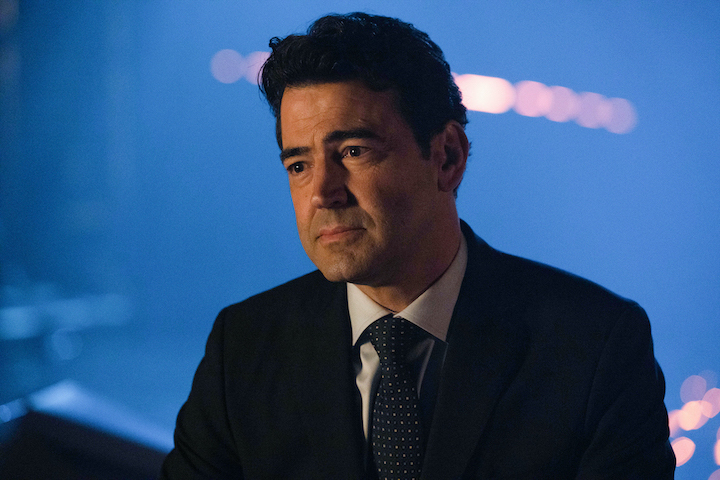 Ron Livingston’s Jonathan Dixon is a key cog in the “A Million Little Things” story. (ABC photo by Jack Rowand) 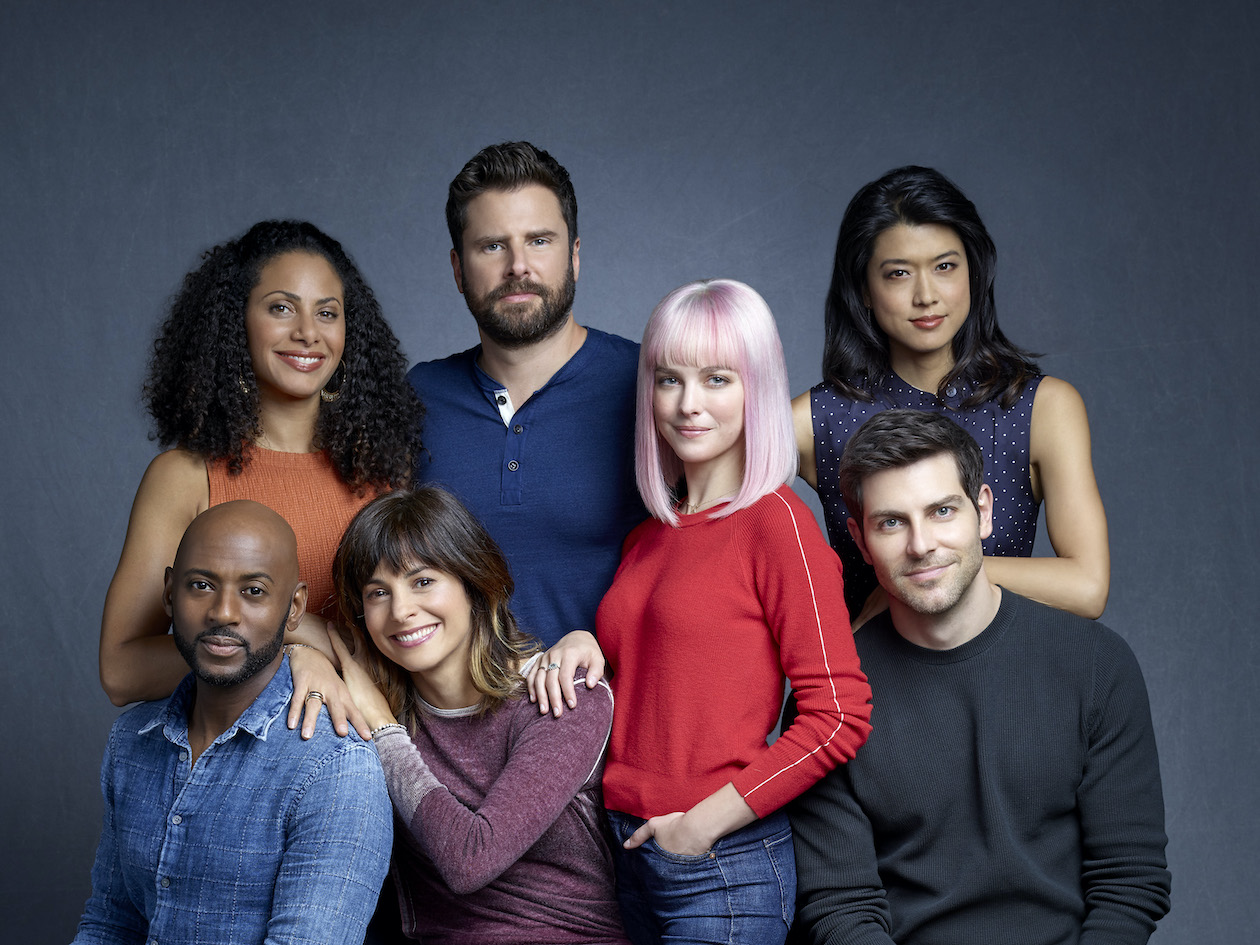 Q: I’ve got to tell you, I literally get mad when the show ends every week, because it does such a great job with the cliffhangers. I'm wondering if you knew that that would be a central component of the stories when you signed on to it? And what is it about the writers that enables them to craft these great, edge-of-your-seat moments each and every week?

And he loves what he calls a “card flip,” which is these kind of cliffhanger moments that you didn't see coming.

Something that I am impressed with is this idea that our show had a little bit of “Big Little Lies” in it – a little mystery – and I didn't appreciate the importance of that to the viewer. I think it really is an important aspect, as I hear feedback.

Q: So, this whole thing at the lake notwithstanding, your character really has shown a lot of growth in two seasons, and I'm wondering if you could speak to that.

David Giuntoli: Yeah; Eddie was a bit of a philandering man-boy, who was living a very dishonest life. Sober, in that he wasn't drinking anymore, but not sober in that he was lying to everyone.

And one of the great tenets of AA and sobriety is honesty. So, he kind of fell off the wagon when he started having this affair with Delilah.

He was not in a very realized part of his life, when we met Eddie Saville. Since then, he has grown to be far more – for lack of a better term – grown up. He doesn't act out every time his life starts getting scary; or every time he gets anxious he doesn't drink; he doesn't philander. He doesn't mix immature and destructive decisions. And there has been a lot – there have been many situations that would drive someone to drink in these last two seasons – for Eddie, and he has not done it.

He’s been honest with Katherine. He weathers his emotional storms internally, or through talking to his friends, as opposed to boozing and acting out. And I'm really proud of him. And I was incredibly proud of his decision to not ultimately drink at the end of the season finale.

Q: Well, of course, now he's faced with another one of those moments where he might be driven to drink – and I know there's probably only so much you can say – but give us a little bit of a teaser for what we can expect with this season finale.

David Giuntoli: Well. … I will say. … Let me think here; what’s a good way to put this?

Listen, I don't know what's going to happen with Eddie Saville going forward. If you happen to know the password to D.J. Nash's Dropbox account, that would really help me out right now.

David Giuntoli: Thank you! All I know is this: This is a group of friends who has very durable relationships with each other, and no matter what they go through, no matter what loss, they all sustain. They can make it through. So, I don't know if that means Eddie is going to be alive, but their friendships will remain intact, and they’ll be there to support each other.

“A Million Little Things” airs at 10 p.m. on ABC, and is streaming on Hulu. 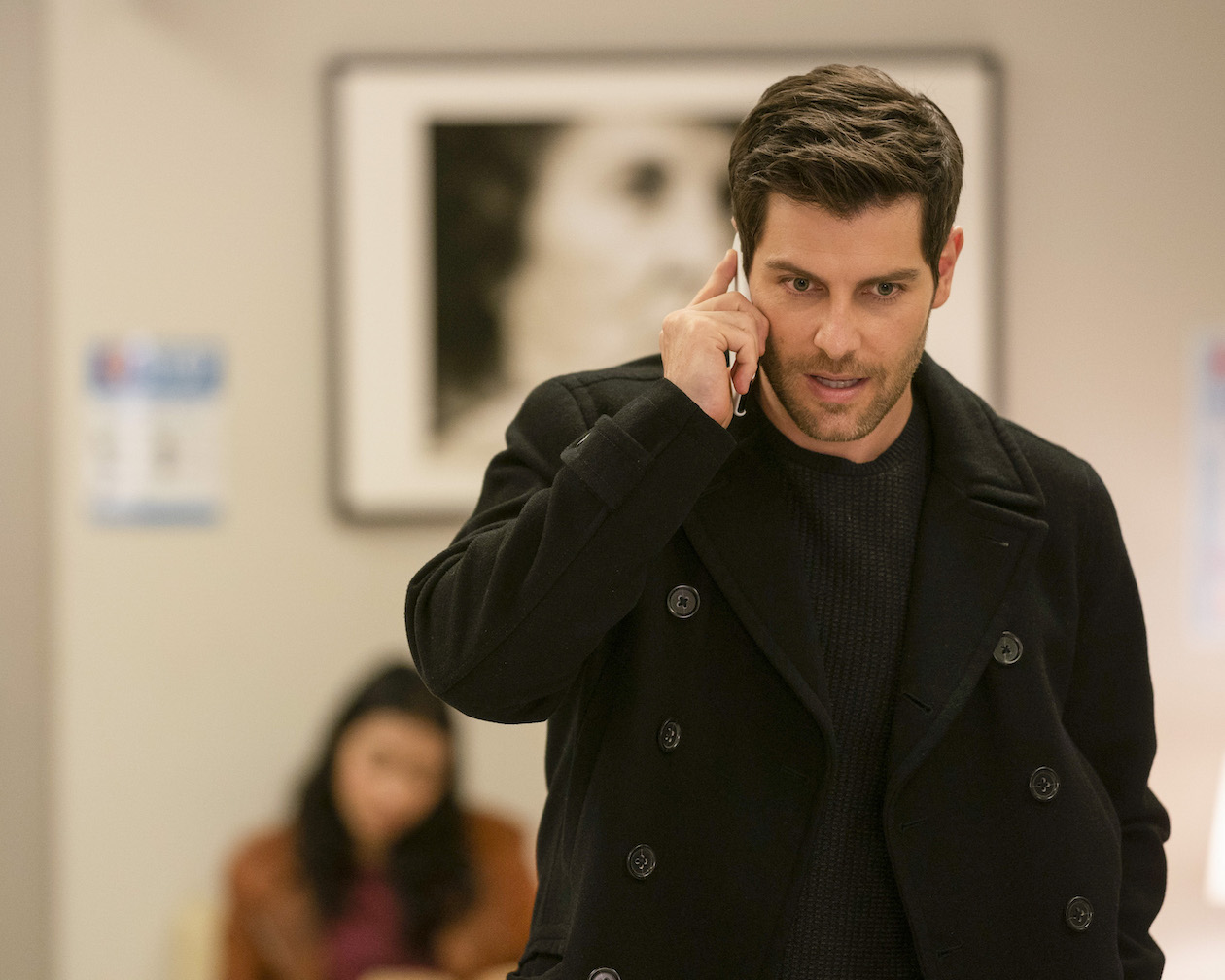