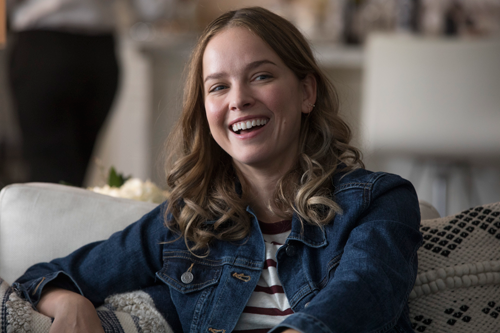 They say friendship isn't one big thing, it's a million little things; and that's true for a group of friends from Boston (including Allison Miller's Maggie) who bond under unexpected circumstances. (ABC photo by Jack Rowand)

There are many things that go into a successful friendship – such is the premise of ABC’s “A Million Little Things.”

Of course, the same could be said for a successful TV show.

Audiences, on the other hand, are attracted to previews, storylines, cast members and timeslots.

This writer looks for chemistry and conflict – and “A Million Little Things” offered those in spades during its rookie campaign.

Jon (Ron Livingston) is the glue who holds everyone together. But when he unexpectedly takes his own life, his friends find their lives spiraling out of control.

Eddie (David Giuntoli) and Delilah – Jon’s wife (Stephanie Szostak) – are grappling with loss and the guilt of their affair; Eddie, meanwhile, is coming to grips with a failed marriage to Katherine (Grace Park), and a lackluster music career. Rome (Romany Malco) and Regina (Christina Moses) appear to have a perfect marriage; but he, too, is having suicidal thoughts, and she is struggling to establish a culinary career.

Gary (James Roday) is on the rebound from breast cancer, and has a chance encounter with Maggie (Allison Miller), whom he believes is also in remission. As they grow closer, he learns she not only has a reoccurrence, but also refuses to get treatment. In fact, Maggie is so determined to spare her loved ones, she lives in an apartment with most of her belongings already boxed up.

Now, this may seem like a depressing riff on NBC’s “This Is Us,” but “A Million Little Things” is, well, just that: It’s a whole lot more that what we see on the surface.

In particular, these characters – these friends – band together to beat their obstacles and find their best lives. That gives the series hope and heart.

Jon’s mysterious backstory – which involves not taking one of the flights that fell on 9/11, and subsequent involvement with real estate projects affecting his group – gives the show juicy cliffhangers each week.

What really puts this series in a class of its own is the work done by Roday and Miller on a weekly basis. Simply put: They are marvelous together.

We know Roday has well-honed comedic chops from his time on “Psych.” I’m not sure we expected him to so quickly and adeptly master drama – and not just any drama, mind you, but dealing with cancer, the loss of his friend, and finding – and perhaps losing – the love of his life.

Miller is masterful as Maggie, as she steadfastly refuses to put herself back into a world of chemotherapy. She reluctantly enters into Jon’s world, befriending his friends and falling in love with Gary, only to find her life is worth fighting for.

Suffice to say, Miller has to run through a gamut of emotions each episode – and she pulls it off with poise.

Gary and Maggie fight, break up, get back together, sing (loudly) for customers at a restaurant, laugh, cry, and – thankfully for us – save her life.

Their relationship is the heart of the show, and provides one big reason to watch “A Million Little Things.”

BTS caught up with Miller ahead of the season two premiere (9 p.m. Thursday, Sept. 26, on ABC – WKBW-TV Channel 7). Conversations involved her creation of the character, working with Roday, and (yes!) “cliffhangers galore” in season two. 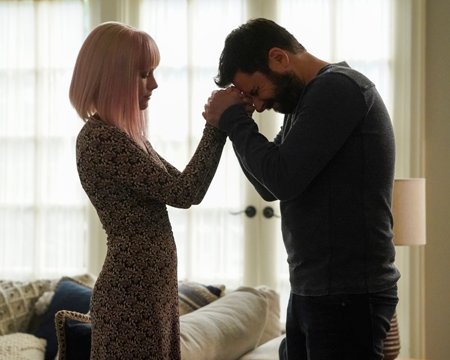 Gary and Maggie struggle with living together post-cancer in the season two premiere of “A Million Little Things,” airing Thursday, Sept. 26. Pictured are Allison Miller and James Roday. (ABC photo by David Bukach)

Q: I'm wondering if going back for season two was kind of like going back to the first day of school after summer vacation?

Allison Miller: That’s funny. I would compare it to that. The anticipation of seeing what’s changed over the summer, what’s going to be new, what new things we’re going to learn about all of our characters. Yes; I would say that comparison is an apt one.

Q: I'm very much looking forward to the new season. I really was a big fan of your show last year, and I think the thing that really did it for me was you and James, and what you brought together as a tag team on screen. Did you know him ahead of time, or how did that work, because you guys had chemistry from episode one. I'm sure that's not an easy thing. Tell me a little bit about how you guys met, and how you developed this amazing chemistry so quickly.

Allison Miller: You know, when you audition for these kinds of shows, especially if you’re playing partners with someone, a lot of the time they will do a chemistry read just to have you read the scenes together, and see how it feels in a tiny room with a bunch of people watching. And I showed up, and I think we nailed it. We had never met before. But, you know, we're on the same page. We have a similar sense of humor and we get along really well.

Q: A lot of people obviously know him for “Psych” and were probably somewhat surprised to see him do this very dramatic, very heavy role. What can you tell me about him as an actor and what he brings to the table?

Allison Miller: He is so present as an actor. He learns his lines incredibly quickly, and has sort of a photographic memory. … And he also is really spontaneous. I think he’s probably the most spontaneous out of all of us, and keeps things alive after you’ve shot the same scene for a few hours. He’s continually finding something new, and playing with it, and making it engaging for the other actors in the scene. He’s a great scene partner to have because of that.

Q: Every actor I've spoken with over the years always tells me about how they sort of want that onion – they want that character who’s got all the different layers and all the different sides. How do you get into Maggie, because she has so many different, interesting parts of her personality – so many different, interesting things she’s dealing with? You know, primarily for that whole first season, you are playing somebody who is really anticipating dying – and coming to grips with that. How do you begin to get into that mindset?

Allison Miller: Well, I spoke with a lot of people who were going through treatment for cancer, or who had gone through it, and asked them just endless questions. And a lot of the time just let them talk, and listened to try to get a glimpse of what that sort of closeness to mortality might feel like – because it’s always there for all of us. But, illness, I thought, makes it feel more urgent.

I think it's my job as an actor to access empathy, and try as best I can to convey what I hear them telling me. That’s a lot of the job, is just listening to people who actually know what they’re talking about.

… It’s even harder this season to do that (separate the role from real life), than it was last season, I’m realizing, because Maggie is facing all new challenges, and she goes to some really emotionally charged places. 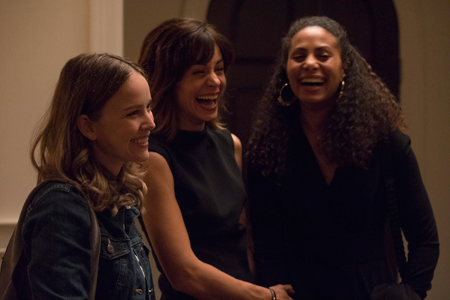 Q: Did you know specifically about her prognosis? How much did they tell you about that? Were you sort of kept in the dark like the rest of us, or did you have like a roadmap that they gave you, as far as where she would get to by the end of the season?

Allison Miller: I eventually found out. But I think – and I may be wrong about this – but I believe that the original plan was that Maggie was not going to get through season one. But they changed their minds, thank goodness! And so, once we got to episode three, I was getting information from a showrunner reassuring me that I was going to live.

I had not even considered the fact that I wouldn’t. All of a sudden, he was saying, “Don't worry. Maggie’s going to live.” (Laughs) I was like, “Oh, there was a possibility that she wasn’t going to. I’m really glad to know that going into it.” (Laughs)

Was there was a possibility that they were just going to have you around for a little bit?

Allison Miller: I think there was a possibility that they were going to have me around for a little bit, but I think that this show is so much about hope. And I think that, honestly, if I was the one in charge, losing another character that early on, I think it would be too much for that group of friends to go through.

It does happen in real life all the time, but what we're trying to convey is a message of hope and love and friendship.

Q: One of the other things that I really enjoyed about the show last year was the fact that every episode really had sort of a great cliffhanger and left us on the edge of our seats. I'm wondering if you felt that way reading the scripts, and if we can expect that to continue in season two?

Allison Miller: I would say that it will be more than you’ve even bargained for in season two. We’ve been at table reads and ended them and all looked around just with sort of shocked faces. There are cliffhangers galore.

“A Million Little Things” airs at 9 p.m. Thursdays on ABC, starting with the season two premiere on Sept. 26. 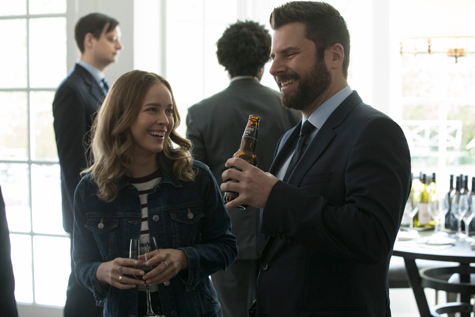 Maggie and Gary have a lighter moment on “A Million Little Things.” (ABC photo by Jack Rowand)