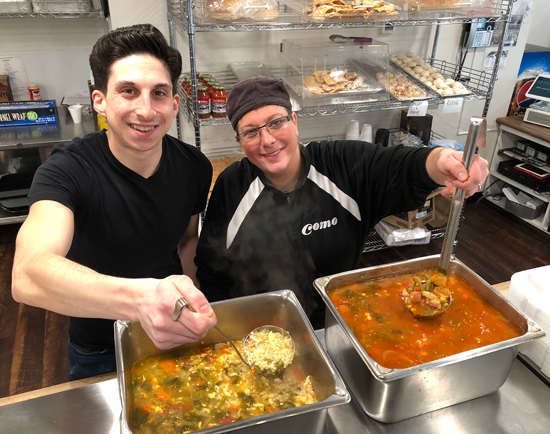 Dominic Colucci and Dawn Antonacci serve up The Como Restaurant's signature soups inside the family deli in Lewiston.

Soup's on! The Como Deli on Center Street brings lunchtime favorite to Lewiston

There’s a reason Jack Canfield and Mark Victor Hansen named their book series “Chicken Soup for the Soul.” As it states on their website, the motivational speakers wanted to share stories that, “soothe and provide comfort, just like their grandmothers’ cooking.”

That’s what soup does: It warms the body, mind and soul.

If we’re lucky, it also fills our belly with hearty deliciousness.

When The Sentinel broke news of The Como Restaurant expanding into Lewiston in 2018, one of the first thoughts – nay, wishes … hopes … dreams! – was that village diners would be able to pick up a pint of pastina or a quart of minestrone from the world-famous Italian kitchen.

Sure enough, as the Antonacci and Colucci families began to reshape the eatery at 555 Center St., the line was built, the dishes were assembled, and a series of large metal containers were filled with rich broth, delicate proteins, fresh vegetables and al dente pasta.

And it was amazing.

“They enjoy it,” said Dominic Colucci III (aka “Dom Jr.”). “I mean, it’s nice; it’s convenient; it’s different. You know, there’s not a lot of places where you can just go grab some soup and run out the door.”

Soup is made daily at The Como’s Pine Avenue headquarters and delivered to the Lewiston deli.

Steven Hall is the chef behind the ladle. When it comes to making soup, he said there are no shortcuts.

“We make everything … everything’s made from a straight stock that we’re making here,” Hall said. “We’re not buying the stock. … We don’t add any preservatives. We’ve reduced the salt over the years as people’s tastes changed. … And, I think, because the soups are consistent, the people know what to expect. That’s what brings them back.”

A different soup is offered each day. A second soup option is always egg drop.

“Egg drop is made with fresh, whole chickens, and they’re boiled down; carrots, celery, onions – everything goes into a pot,” Hall said. “We have special pots that we made that trap everything in there, and then we take that out, and then everything is diced up. The meat is pulled, diced up, everything’s added back into the broth. And then we put a egg and cheese mixture in there, and that’s what gives it that egg drop. And then, finally, the pastina is put in right at the end, so the macaroni stays nice and hearty.”

“It’s a secret family recipe,” Antonacci said of the soup her family has been making for almost 100 years. 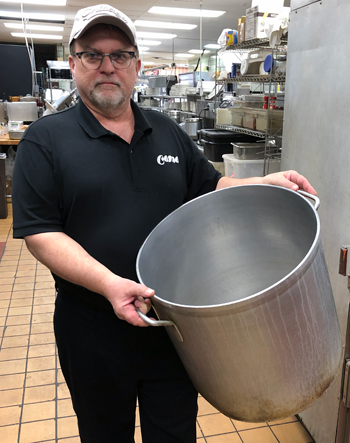 Chef Steven Hall shows off the large pots that separate the proteins and vegetables to create a rich, flavorful soup broth. 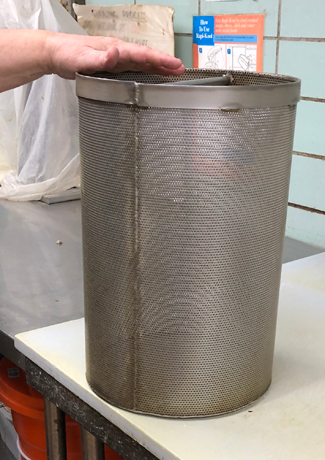 While egg drop is the most popular soup, one of the newer options is close behind.

“I don’t know of any restaurants that have a lasagna soup,” Antonacci said. “We have that on Mondays, and it’s to-die-for.”

So, how exactly does one (intentionally) turn a lasagna into soup?

Hall explained: “It’s a tomato-based broth, and it has ricotta in it; it has three other cheeses in it – some Parmesan, some Romano – then it has fresh escarole that we put into it. Then it’s boiled down. And then we grind our own meats here, so it has a hamburger that’s fried up with a little bit of onion. And then that’s added to it. And then that’s all cooked down, and then we add the macaroni, again, at the end.”

“Everybody loves it; everybody raves about it. People come from all over just for that soup,” Antonacci said.

Hall noted, “I like the minestrone soup, because it’s got all the fresh vegetables in it.”

Dominic Colucci Jr. (aka “Dom Sr.”) said customers often come to the Niagara Falls deli for the power of pastina.

“A lot of people come in our deli; they’ll tell me, ‘My kid is sick; he’s got the cold. I need two quarts of pastina soup.’ It seems like it’s more like medicine to them. It’s going to cure their kids when they’ve got colds or flu bugs or that type of thing,” he said. “I get a lot of comments like that – ‘Can’t wait to have your soup. It makes me feel so much better.’ ”

Recently, Hall has added chili to help patrons ward off winter. Earlier this week, he tried his hand at split pea and ham.

Whatever one fills their bowl with, soup is often paired with a doughy partner.

“We have our Italian bread that we make here every day. It’s baked fresh. And then also we have our specialty, which is the pizza bread. It’s also baked everyday fresh,” Hall said. “It’s raised three times. It has special seasonings and oil, garlic, and then it’s rebaked after all that is added to it. People come from all over, and they buy trays in the deli of just straight pizza bread. That’s one of our big sellers.”

“It’s a nice, high-rising dough with Italian seasoning and oil,” Antonacci said. “It’s delicious. People try copying it with the focaccia bread, or they say it’s a pizza bread, but it’s either thinner or not the right consistency exactly. So, nobody could ever match it, which is nice (laughs).”

“They don’t have Paula – they don’t have a Paula waiting in the wings,” Dom Jr. said. “Paula is our head baker. She’s been there for over 50 years.”

Paula Ventresca is responsible for The Como’s breads (alongside Maria Urban), as well as popular pasta dishes such as manicotti, ravioli and gnocchi.

Also inside the Niagara Falls kitchen is “our butcher, Gino (Cieri). He’s 87,” and still lifting, cutting and trimming proteins with expert skill and attention.

When Dom Jr. was younger, he would look forward to sampling the work of late cook Lena Micelli.

“She did a lot of those soups, and I think that she helped a lot of people refine them. They did it the way that she did it,” Dom Jr. said. “I still miss her peas and pasta to this day.”

With countless hours behind the cooking counter, The Como kitchen’s team is hard to replicate.

“That’s where the consistency comes from,” Dom Jr. said. “Lucky for us, we’ve got some younger people that are learning, too.”

Working in Lewiston, Antonacci has found a passion for making a variety of other dishes – and some sandwiches she didn’t expect to enjoy.

“I like doing the veal parm, the chicken parms, broccoli parm, we have eggplant parm,” she said. “I wasn’t really into doing subs very often on Pine Avenue but, in Lewiston here, everybody is raving about my subs. The steak and cheeses, and the barbecue, and the veal parm sub, and the chicken parm subs.”

“We have a secret seasoning that not too many people know about,” Antonacci said. “It gives a little extra taste.

“But, I mean, I just love cooking, in general. It’s not actually one specific thing; I love doing it all. And the look on somebody’s face when they’re eating my food … that look – that’s why I do what I do.”

“We find our spot that we enjoy, and we’ve been lucky to do that,” Dom Jr. said. 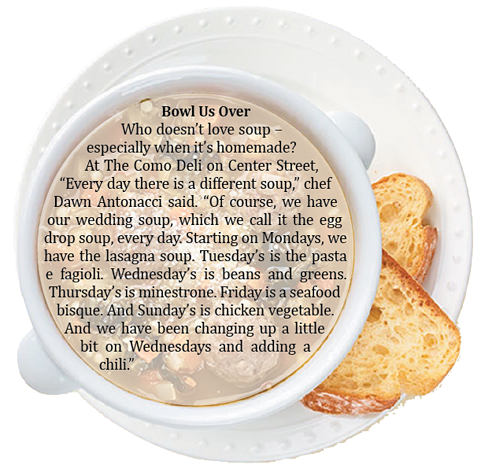