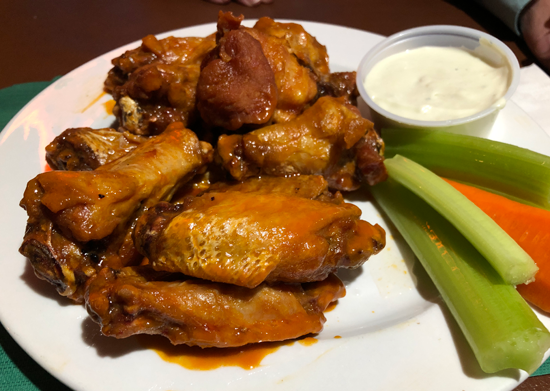 Chicken wings are serious business in Western New York – which is why it’s no surprise more than 40 restaurants, pubs and chains were nominated to win Niagara Frontier Publications’ “WNY’s Best Wings” contest.

In the end, one location’s wing was king: The Isle View Bar & Grill scored more than 35% of the reader vote.

Owners Max Nizialek and John Drennan took over the Tonawanda eatery a decade ago. Though the establishment is nearly 100 years old, she called winning the contest “a pleasant surprise.”

“I think we have the best wings,” Nizialek said. “But we’re not really known; we’re small,” compared to other vote-getters such as Duff’s, Just Pizza and Apple Granny Restaurant.

Nizialek explained, “Our food, our menu, is your general American fare. It’s not just bar food. You know, we have steaks, spaghetti. Our pot roast is phenomenal. That’s what people come here for a lot. Our Reuben sandwiches and our wings. Those happen to be three things that we’re really good at.

“But this place, as far as our fish fries, same cook (Bonnie Brennan) for 20-some years, because she stayed with me when I bought it. And she’s fantastic. And our fish fries are really good. They’re excellent.”

Most food is made from scratch.

“Our corned beef, we roast it. It’s here. It’s done here; it’s sliced,” Nizialek said. “My husband or myself are always on site so, if you have a problem, we can fix it. And that’s something I’m proud of, too. I think we do excellent service. We’ve had off days at times, like anything, but we provide good service.

“We really want people to feel welcomed, friendly, and a lot of people, once they come in, they go, ‘Oh my god, this place has been here for so long. We drive by it, never stop; it’s really nice.’ It’s cozy – I hear it’s cozy a lot. And I think it is. It’s comfortable. You feel comfortable – like you’re home.”

“In fact, on WBEN, somebody called into the Bauerle show and said that we have the best pot roast and spaghetti in the area,” Nizialek said. “He was doing a show on ‘best.’ And I happen to be sitting, doing books, and I’m like, ‘Oh my god!’ Jim from Hamburg – and I still do not know who Jim from Hamburg is, (but) he recommended (us).

“Our food, I mean, if you’re coming from Hamburg for pot roast, you’ve got to like it. And I’ve had people come from Arcade for our wings. So, you know we’re doing something right.

"It’s just trying to get the message out that it’s not a biker bar; it’s a very comfortable, homemade food, kind of bar, and friendly. People are friendly here. The service is friendly.” 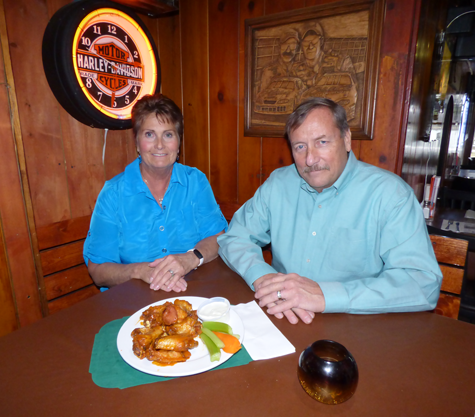 As this is the birthplace of Buffalo wings, perfectly preparing drums and flats is a required science.

At Isle View, “We do a roaster wing, and not just like an extra larger wing. It’s a big wing. It’s pretty big; pretty meaty,” Nizialek said. “People like wings crispy. Even when we do them crispy, they still are good size. They don’t shrink to nothing. You know, just bone. So, I find that that makes a big difference. They’re nice and juicy, too, even though they’re crisp.”

He quipped the wings in the photos were on a bird less than one week prior.

“Which I think is another reason why they’re so good,” Nizialek said.

Isle View chicken wings come bone-in or boneless, deep-fried, or grilled on the pit for an additional $1.25. Blue cheese, carrots and celery are included with the price.

Cajun is the most popular flavor on a roster that includes lemon pepper, barbecue and garlic Parmesan. Ten wings mild, medium or hot cost $10.95. The seasoned variety is $12.75.

Joan wrote, “Nice and crisp – as much blue cheese as you want – and the best service ever!”

Andrew noted, “I love wings and have tried many; these are best.”

Bill explained, “Not only are the wings perfect, the staff is super fun. It’s a complete package.”

“Thank you very much for taking the time to fill out the slip or go online,” to vote,” Nizialek said. “(We’re) very happy that you did it, that you took the time to do it. I think it’s fantastic.

“So we have great customers, too, on top of good service (laughs). It’s great.” 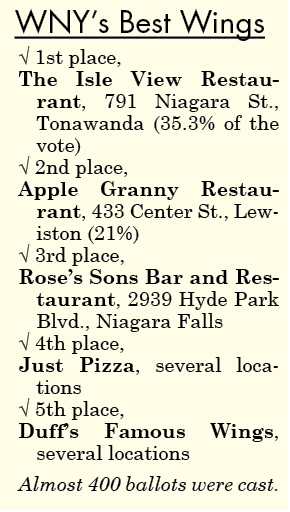