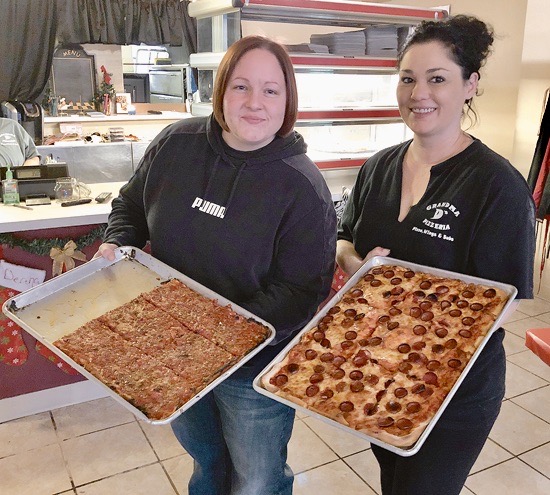 Deana Barlow and Jamah show off some of the pizza options at "The Original Destino's."

For more than a decade, Destino’s Pizza & Pasta was a popular restaurant known both for the quality of its slices and the charitable nature of its owners. Frank Destino and his family would often give back to the community, and notably to the neighboring Lewiston-Porter School District campus.

Unfortunately, “My dad decided to sell, because he was having health issues,” daughter Jamah Destino said Thursday.

She took the family trade to Wheatfield, where success was found at Grandma D’s Pizzeria.

“And then three years later, we decided to (return) here,” Jamah said. “I’m back.”

Indeed, the Destino family has returned to 3909 Creek Road. Signs on and in front of the building boldly state, “Grandma D’s Pizzeria” and “The Original Destino’s.”

Frank, who was busy working in the kitchen, said, “It means the world” to be back. “This is where it all started, 2004. We started back in the ’70s, but this is where my original place started.”

“We missed the location,” Jamah said. “It’s bigger” than the other eatery, which was named for her grandmother, Carmella.

“She passed away in between him closing and me opening,” Jamah said.

Grandma D’s uses Carmella’s recipes – “her originals – the pasta and the sauce and all that is her recipes,” Jamah said.

Carmella’s creativity was passed down to Frank, and now to Jamah, whose pizza was awarded at the inaugural Festival of Slice last year.

Jamah said, “I love cooking. And the people come in and everybody ends up being like family.”

Her pizza is unique in its “mix of flavors,” she said, as well as “the product; years of experience.”

Frank said, “It’s unbelievable – just like my mother’s. She’s a great cook; she’s a hard-worker; committed to what she does; takes pride in her work.”

To see his daughter own and operate Grandma D’s, “It means a lot. I’m proud of her,” he noted.

Customers, she said, are “so excited” the Destino family has returned.

That’s in addition to “My homemade sauce and meatballs. Lasagna. Homemade meatball bites. There’s ricotta gnocchis with spinach and Alfredo.”

Other popular items include subs, chicken wings and chicken parm.

In addition to the food, the restaurant has a newly decorated dining room with four booths and three tables.

Grandma D’s is open from 11 a.m. to 9 p.m. Tuesday through Thursday, 11 a.m. until 10 p.m. Friday and Saturday, and from noon to 9 p.m. Sunday. A grand opening on Thursday, Dec. 12, will feature the full menu layout, plus “We’re coming up with different specials to do for that day,” Jamah said.

She also will defend her specialty pizza title at this weekend’s Festival of Slice inside The Conference & Event Center Niagara Falls.

“Stop down and be a part of the festivities and cast your vote for Grandma D’s to take home another win!” she said. 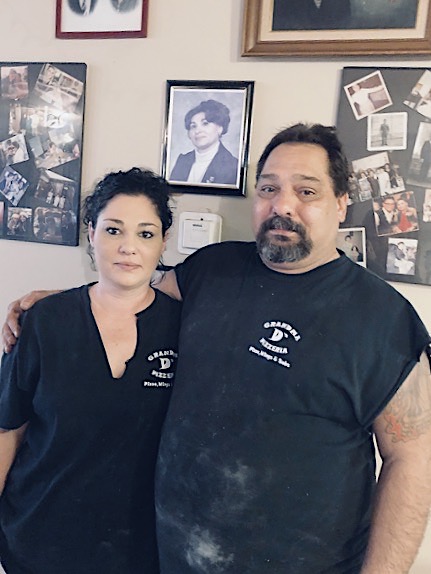 Jamah Destino and her father, Frank, stand in front of the family wall – and underneath a picture of Carmella – at the new Grandma D’s Pizzeria on Creek Road. 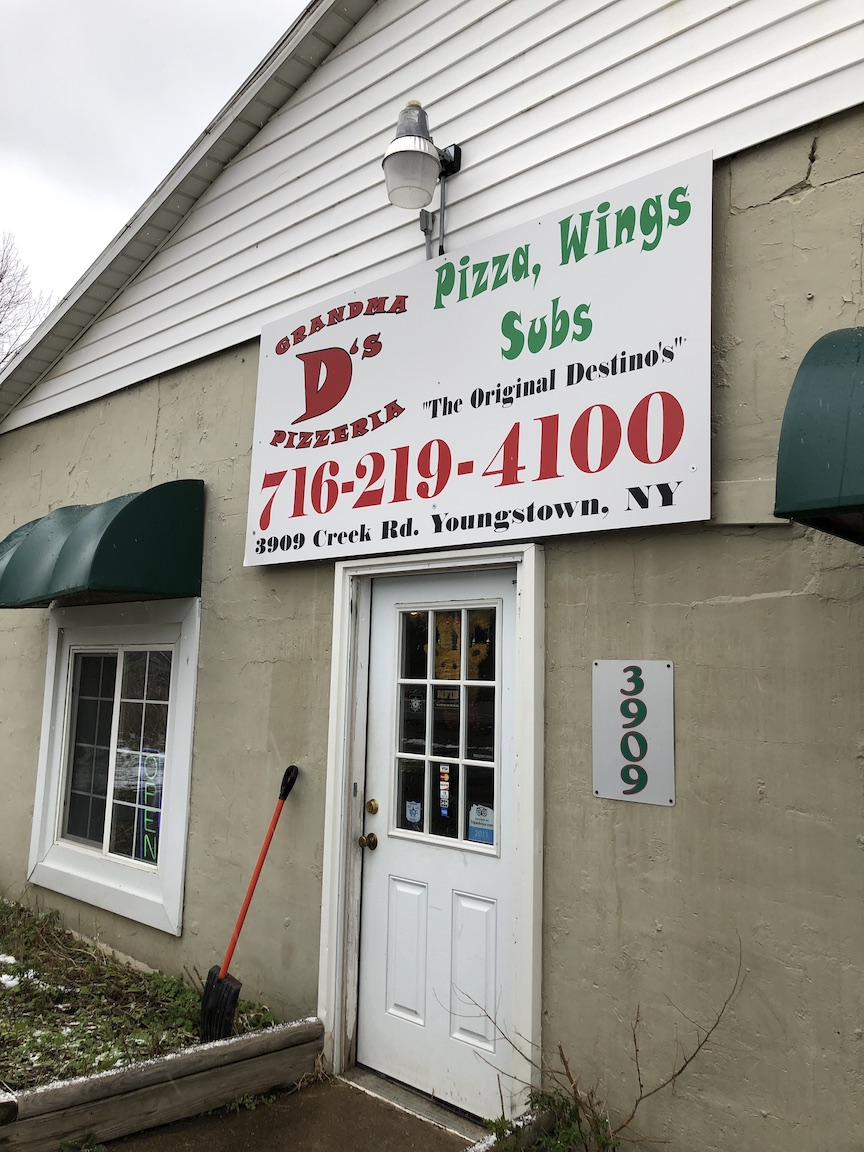 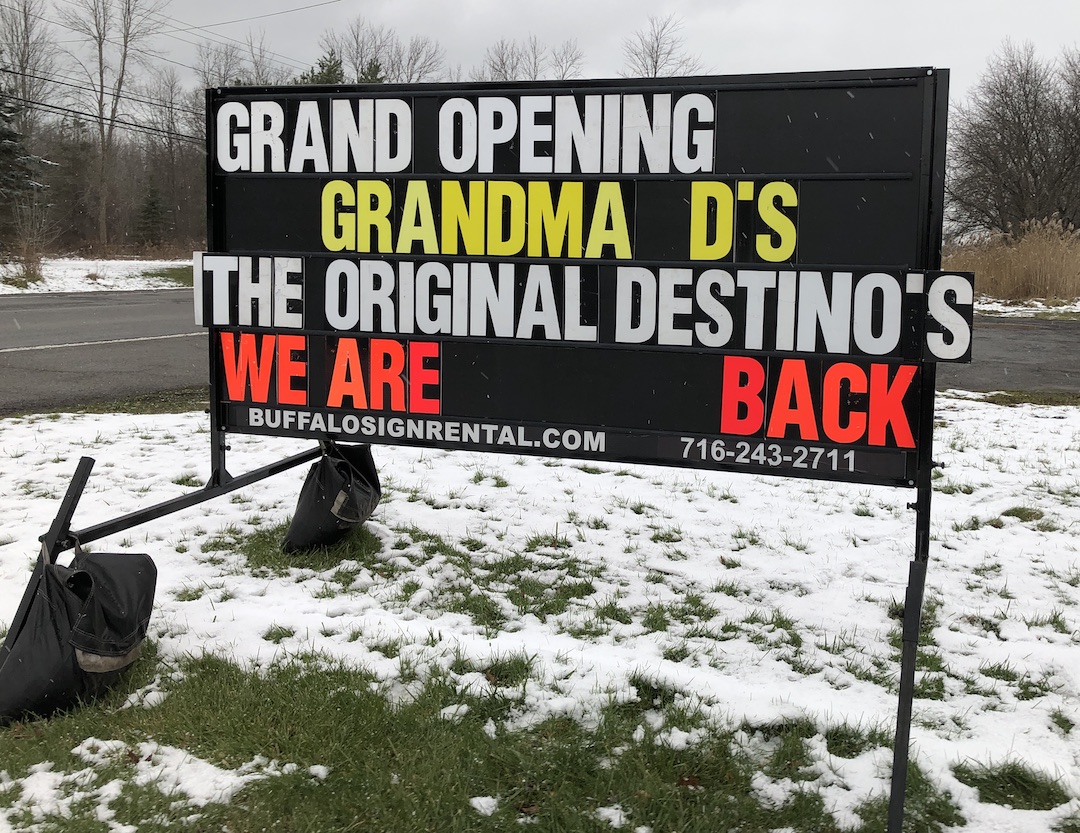