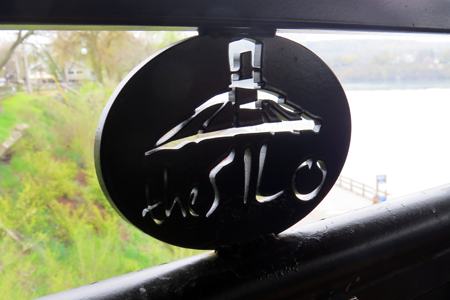 A look outside one of The Silo Restaurant deck windows.

Summer ahead: The Silo Restaurant making environmentally friendly changes for 2019

While 2018 was the year in which The Silo Restaurant looked to its past, 2019 is all about looking to – and preserving – the future.

Having celebrated 20 years on the Village of Lewiston waterfront last summer, “This year, we’re really focusing on our carbon footprint, our environmental footprint,” manager Lexi Alfiere said. The restaurant had its soft opening this week, and “We’re really trying to get a grip on everything we can do for the community.

“We’re doing what we call ‘The Silo Sweep’ with the crew. Once a shift – so, we have the morning shift and the night shift – they go out and they ‘Silo Sweep,’ which is just picking up garbage around the area, whether it’s down there by the other restaurant, or whether it’s by the water; just picking up as much garbage as they can, twice a day. We call that ‘The Silo Sweep.’ ”

What’s more, “We’re going to switch to paper straws instead of plastic straws. We’re looking at paper bags instead of plastic bags. We did a paper cup instead of a plastic cup. We want to use everything that’s biodegradable,” Alfiere said. “In our 21st year, we’re established; we’re a well-oiled machine; and now we’re really paying attention to everything we can do for the environment.”

A paper straw is as hard as a plastic tube – so it maintains usability – but paper decomposes at a faster rate.

“We’re right on the water. It’s more important to us to respect the water than anything,” Alfiere said. “So, that will be really cool once we get them in for the season. Same with the paper cups. We custom-designed them.”

“Also, we still have our paper to-go boxes, the cardboard instead of the Styrofoam. We’ll never use Styrofoam,” she added.

In addition to being environmentally friendly, The Silo remains a youth-friendly workplace – most notably in terms of shift times. Hours of operation are scaled back during the school year.

Alfiere attends Niagara University. She explained, “Honestly, as a student, I know that it helps; just getting them home two hours early is significant in anyone’s life, but especially for students. And because most of our employees are students, we want to make sure they can work and balance their family life, and balance their school life.

“And we love keeping the atmosphere fresh, so we love hiring students. It’s fun; they love it; they’re excited. Half of them, it’s their first job, so, for them, this is everything. I mean, this season, more than ever, I think we have a really excited crew; because we have people that are coming back from last year that know what they’re doing, and then we have our new people. And even like a couple of the new crew members, before their interview, they did a countdown to The Silo interview on their Instagram. It was like ‘Countdown to Silo Interview,’ and it’s so cute. They’re so excited.

“It’s good for us to respect their school days. We know it’s hard. I know it’s hard as a student; so, I, more than anyone, am making sure that they can be home.”

The Silo Restaurant is a popular place thanks to its intricate landscaping and woodworking, its ice cream caboose, and the famous "Haystack" steak, potato crisp and cheese sandwich. 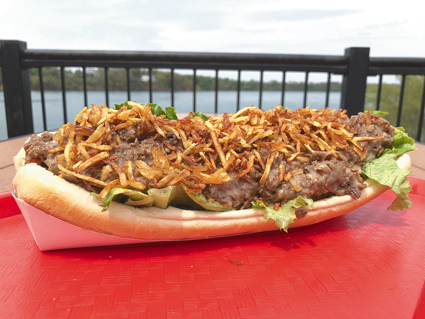 The Silo’s owner, Alan Hastings, along with Alfiere, and the restaurant team, made it a point in recent years to listen to customer feedback and make suggested changes where possible.

One notable menu addition this summer is at the ice cream caboose.

“We have an oats-based ice cream by Perry’s. It’s called apple strudel,” Alfiere said. “It’s dairy-free. Super good option. We’re going to keep it all season. They do have more dairy-free options that we’re going to have. We have lactose-free vanilla.”

This dairy-free option is for people who enjoy a scoop or two of ice cream on a warm day, as well as for those who enjoy, say, nine or 10 scoops and tons of toppings.

“We still have the ice cream challenge with the gallon of ice cream; that’s still there. Now, if someone wanted to do it with oats-based ice cream, because they can’t have dairy, we can do that,” Alfiere said.

The “Sand Dock Sundae Challenge” remains a popular competition for those with a hearty appetite and a strong desire to take home a free souvenir T-shirt.

Inside the former coal silo-turned kitchen, “Our crew is, actually, this season they’re working together to come up with the specials. We’re letting them get creative with it,” Alfiere said. “We have a new catering manager who’s taking the catering department and just running with it. It’s totally awesome.

“We’re still featuring ‘The Haystack’ (ribeye steak sandwich). That’s still our main focus point. But our specials this year are going to be really cool, because the crew members are able to come up with them. They’re getting really creative with it, so I’m looking forward to that. …

“We still have our amazing fries that I think are the best fries on the planet.”

She added, “We’re still committed to making sure we have the best quality food that we can get. I think this year, more than ever, we know what we have to do. We know how to do it. We’re like a well-oiled machine, and we’re committed to making sure every customer has a good experience – while doing the best thing for the environment; while making sure we have the best-quality food; low wait times; our awesome environment; our awesome atmosphere.

Two past issues that caused frustration for customers have been addressed. A pager system was installed to reduce speaker-system noise echoing into the neighborhood. Additionally, a surcharge placed on orders last season to compensate for food cost and wage increases is gone.

Alfiere described The Silo as “a staple for Lewiston.”

“You come to Lewiston, you’re going to The Silo,” she said. “Our crew is so proud of that, that they’re working at making sure our reputation stays the best.”

Inspirations on Canvas owner and Lewiston Business Group member Kathy Pignatora said The Silo “means summer is on its way and Lewiston comes to life!”

The Silo is located at 115 N. Water St. Weather-permitting, the restaurant is open from noon to 8 p.m. until its official opening on May 1. Hours then extend to 10 a.m. until 9 p.m. Sunday through Thursday, and 10 a.m. to 10 p.m. Friday and Saturday, until the school year ends. Once summer vacation begins, The Silo will be open until 10 p.m. daily.

Customers looking for meal specials or special meals can check out The Silo’s social media pages, as well as its website, www.lewistonsilo.com.

“We’re going to be offering great discounts all throughout the season – as always,” Alfiere said. 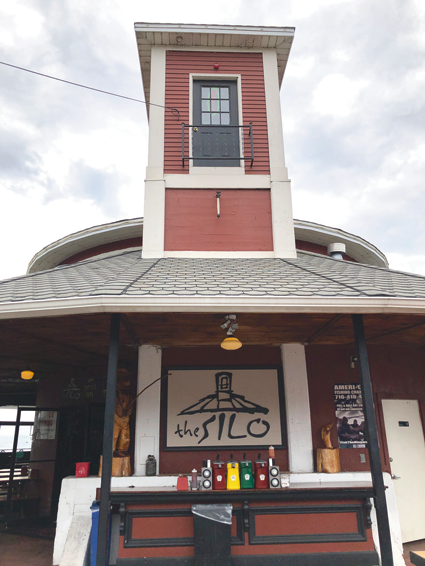