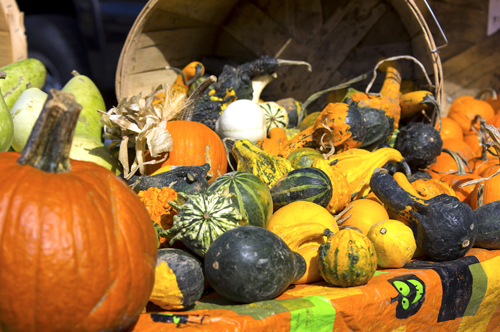 Lewiston Harvest Festival will be 'hopping' this year

Tue, Mar 6th 2018 05:05 pm
By Joshua Maloni
Managing Editor
The Lewiston Harvest Festival, which expanded onto Center Street for the first time in 2017, is growing again in 2018.
On Monday, the Village of Lewiston Board of Trustees approved a motion to approve a request from Niagara River Region Chamber of Commerce to hold the 35th annual gathering on Saturday and Sunday, Sept. 22-23. This year's event has been retitled "Harvest & Hops Festival."
President Jennifer Pauly told trustees the event will take advantage of the growing craft beer craze while providing restaurants with an opportunity to hold events on Saturday night. She noted village brick-and-mortar eateries will have first dibs on selling product on Center Street. A farmers market, meanwhile, will include selections from area cider and wine vendors.
Following the meeting, Pauly told The Sentinel, "The Harvest Festival is a favorite festival amongst locals and visitors - it's kind of the end-of-the-season festival - usually with 'fall' weather that complements walking through a historic village. Our festival has a nice combination of crafters - those who make their own items, NYS-designated farmers market, and ease of walking the street to visit the businesses.
"Over the past nine years, we have heavily marketed this event, and it has grown in the number of vendors, as well as attendees. Last year the decision to move on the street was one that was thought through two years prior, and the element of adding 'hops' was also discussed over the past two years. With the appeal of craft and seasonally inspired beers and addition of the Brickyard brewhouse, we felt we could incorporate the 'hops' part and attract a larger audience with something for everyone. Our hope is to create an event that carries through the evening, bringing an extra element to businesses on Center Street when the road is closed.
"Crafters would still only remain open through 5 p.m., but we are looking to incorporate something similar to the Cocktail Festival - but focusing on craft and autumn-inspired beers - allowing our dining establishments to have entertainment and hold the visitors in Lewiston a little longer."
On Harvest Festival weekend, Center Street will be closed from Seventh Street to Fourth Street, with additional closings on Niagara Street and South Fifth Street (Center to Plain Street). Hennepin Park and the International Peace Garden will be utilized for event staging and, weather-permitting, Academy Park will be used for parking.
•Trustees approved resident Claudia Marasco's request for the Food Pantry Project to continue collecting donations of food and funds ahead of Tuesday night concerts at Artpark. Volunteers will accept items at the South Fourth Street and Portage Road entrance.
"This will be our 10th year (collecting food and money)," Marasco said. "A dollar goes a long way - and that's our mantra. There is no overhead. There's no fees collected by anybody. Every single penny goes to the people who are in need."
Beneficiaries include Community Missions, Heart, Love & Soul and Ransomville Care-n-Share.
•The board approved the Chamber of Commerce request to use Academy Park (Center Street side) on Thursday, July 19, for a 5 p.m. miniature golf tournament.
"We usually have a golf tournament at Hickory Stick every year, and everybody is doing golf tournaments in the summer. So, we decided to change it up a little bit, and let people who don't have, necessarily, the golf skills, to participate," Pauly said.
She noted the event, hopefully, will offer two rounds of golf.
Moreover, chamber member businesses will be permitted to have a display table at the catered networking event. Owners can call the chamber for details.
Pauly said she expects this will be "just a fun, different type of tournament."
•Trustees voted to approve a request from Sheila Broderick, representing St. Peter R.C. School, to hold a 5K race on Saturday, May 19. Broderick said the race would begin after 4 p.m. Mass. The proposed course runs through Village of Lewiston streets and parts of Artpark.
•Also at Monday's meeting, Center Street business owners Emery Simon and Ken Bryan encouraged the board to look into adding a blanket insurance policy to cover the municipality and restaurant owners at festivals and events where alcohol is readily available.
Moreover, a handful of restaurant owners encouraged trustees to come up with new parking areas to accommodate growing patron needs.
Categories
Food Home feature NFP Second Helping Sentinel Sentinel feature Sentinel HP Feature List Sentinel HP Feature Picture