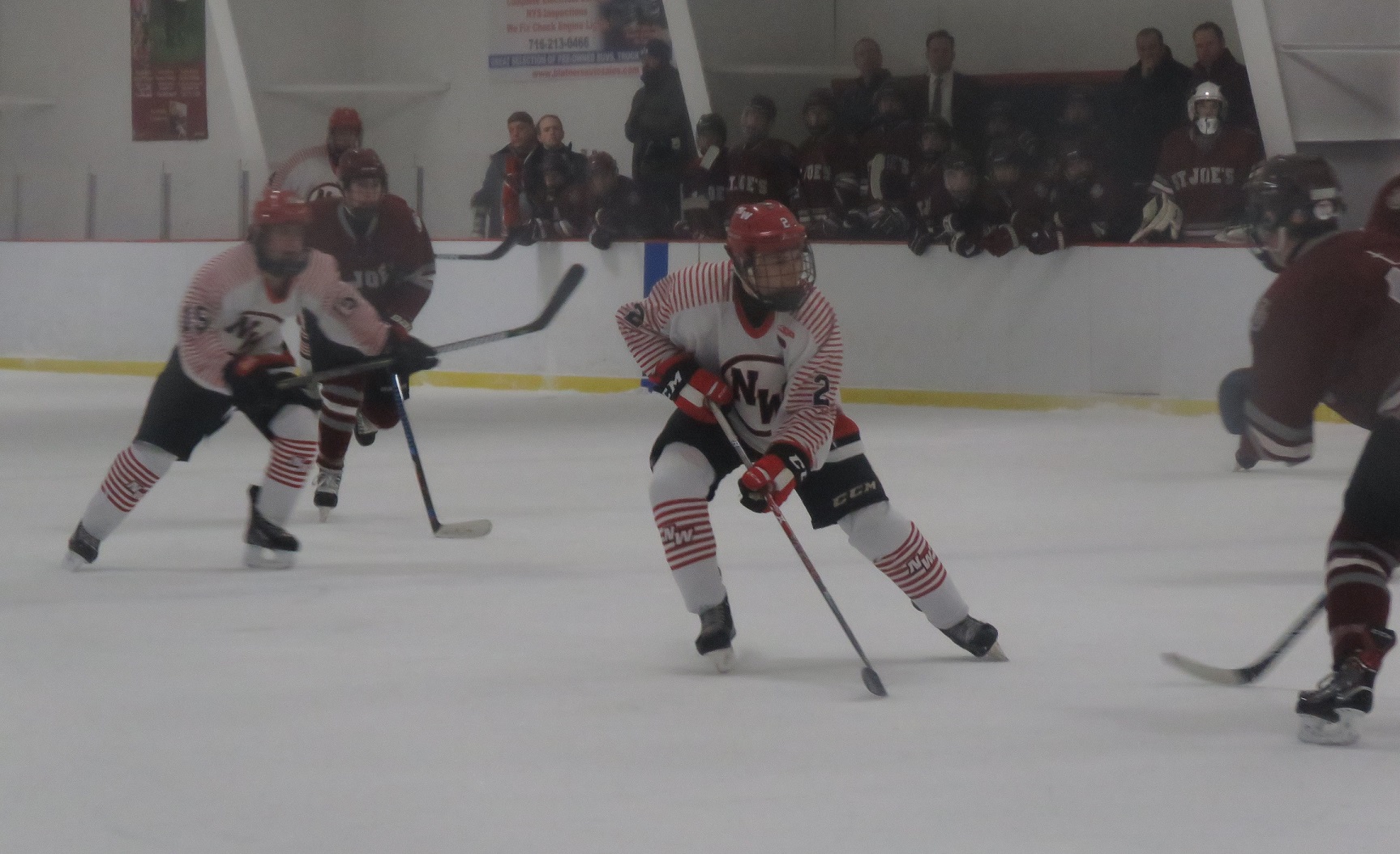 No. 2 Nick Peters comes over the blue line along with No. 15 Dom Pulli right before Chace Woods netted the lone Falcons goal on the night. Peters and Pulli assisted the goal. (Photo by David Yarger)

Wed, Jan 31st 2018 10:05 pm
Fifty minutes of hockey not enough to decide a winner
By David Yarger
Tribune Editor
Niagara-Wheatfield and St. Joes played the most hyped up hockey game scheduled for Wednesday night, as the No. 6 ranked team in the state faced the No. 9 ranked team in the state, respectively. After 50 minutes of play, though, there was no winner and no loser.
The Falcons and Marauders tied, 1-1, Wednesday night at the Hockey Outlet. N-W and St. Joes came in as the second and third place teams in Division 1, respectively.
Fans of goal scoring would've struggled to watch the game, but all-around hockey fans enjoyed the back-and-forth duel between two of the best teams in New York state.
Fast forward to the second period, with the score 0-0, goalie Peyton Siegmann made a big save on a Marauders two-on-one. Siegmann made 24 saves in the tie, and coach Ryan Coyne, who stepped in for an ill Rick Wrazin, said Siegmann came up big a few times to help preserve the tie.
The Falcons got their lone goal with 3:16 left in the second period, as Chace Woods took a wrist shot that went top-shelf over the Marauders goalie's glove. The goal was assisted by Nick Peters and Dom Pulli.
St. Joes answered back though, and with 20 seconds left in the period Ethan Louisos found the back of the net to tie it up.
St. Joes controlled the puck for most of the third period, but the Falcons defense and the play of Siegmann were able to keep the Marauders off the board.
Siegmann's biggest save of the night came with under 10 seconds left in the third, as a mishandled puck gave a St. Joes forward a breakaway to win the game. Siegmann dodged the puck to his left with 5 seconds left and the game headed to overtime.
In overtime, both teams held their own and limited shot opportunities, and after five-minute sudden death, the game ended with a 1-1 tie.
Coyne said it wasn't the Falcons best game, but he gave credit to the Marauders and said they did everything possible to keep them off their game.
"They played a great game. They were bottling us up and they were skating, they were forechecking us; they were really fast today and ... we're always going for the 'W,' but a tie isn't a bad one for us," Coyne said.
Speaking of the Marauders, their defense made Falcons scoring opportunities nearly impossible and Coyne noted that as a big thing which gave N-W fits.
"Joes forecheck was on today. They were not giving our defense any time to move and when we did move they were on the next person. Their forecheck was pretty relentless and that's kind of what we would like out team to do, so it was tough to go against that today," he said.
The Falcons won't get another chance to face the Marauders, as the team plays in the private school playoffs, compared the Falcons, who play in the large school playoffs. Coyne said the competition St. Joes gives is a big preparation for what the Falcons will see in their playoffs.
"We love playing a strong schedule; it definitely is preparing us for playoffs mentally, physically and emotionally. We love the challenge it brings to our kids and they have to overcome adversity. Today with Joes, they were on us and our boys stuck it up and ran to hold off with a tie ... We love playing Joes, as far as preparation. They're always a challenging team and we're up for the challenge," he said.
The Falcons, whose record goes to 9-1-2-1, do not get a break. The game versus the Marauders started a stretch of three games in four nights. The next task at hand is versus Orchard Park, a team that knocked off the Falcons in overtime the first time they met, 4-3.
Coyne said the team has to let go of the tie and focus on getting revenge versus the Quakers.
"We have to put this behind us and start prepping for OP. I would hope the boys come out firing and have a little taste of what happened last game, where we played really well against them and we just came up short in overtime. Hopefully we come out in a different way tomorrow ... and we get on them right away and keep going," he said.
The Falcons now have 21 points, 3 points behind first place Williamsville North.
The Falcons' game versus Orchard Park starts at 7:55 p.m. tomorrow at Niagara University. 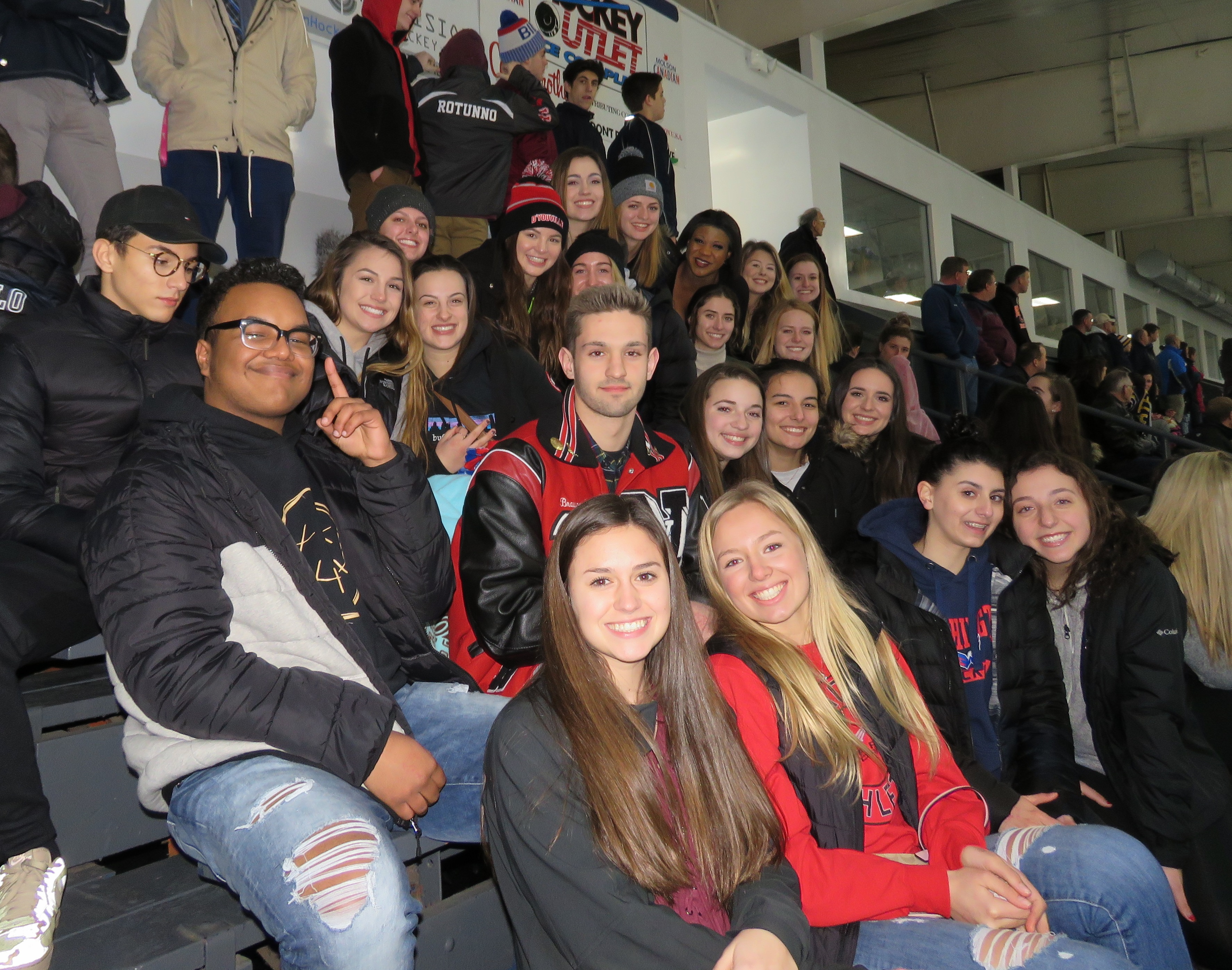