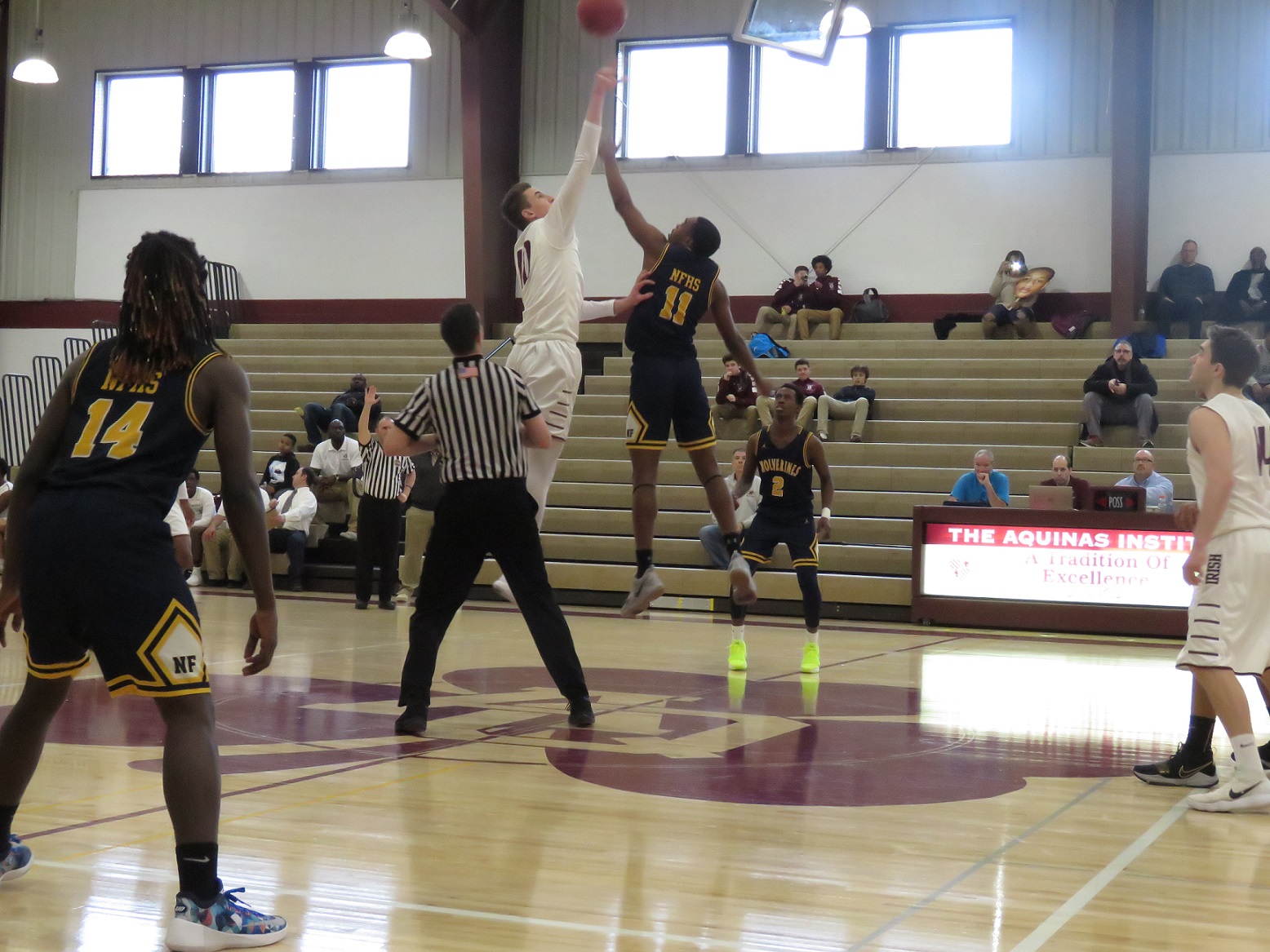 Syquan Ralands of Niagara Falls and Tyler Warner of Aquinas take the tip off at the start of their game on Saturday afternoon. (Photo by David Yarger)

Sat, Jan 27th 2018 04:55 pm
Eighth-grader heats up in fourth quarter to preserve Wolverines victory
By David Yarger
Tribune Editor
It's rare for an eighth-grader to play on a varsity team, let alone start. The Niagara Falls Wolverines are in rare company, as they start two eighth-graders. Saturday afternoon at Aquinas, eighth-grader Willie Lightfoot was a key in sealing the Wolverines victory.
The Falls defeated the Lil' Irish in their third road game in as many days, 68-55.
The game was a back-and-forth affair with the lead changing three times and score tying three times.
Aquinas got off to a quick start, as Kidtrell Blocker took the tipoff and slammed it home.
Quran Dubois led the Wolverines in the first quarter, as he added 6 points. The Falls led after one, 15-13.
The Wolverines extended their lead to 8 points early in the second quarter, 21-13. Aquinas came back immediately, though, as three straight buckets made it a 21-20 game.
Aquinas took a 29-28 lead late in the quarter, but it didn't last long, as Tazaun Rose nailed a 3-pointer off the backboard to help the Wolverines regain the lead.
Eighth-grader Roddy Gayle had 6 points in the quarter, including an elbow jumper to close the half and solidify a 33-29 lead heading into the break.
The third quarter was similar to the first two, as both teams went back and forth to keep the score close. Dubois added 5 points in the quarter and the Falls led, 45-41, after three.
The fourth quarter is where things changed and Lightfoot began to make clutch shots. Lightfoot made two free throws and then sunk a pull-up jumper from the elbow to extend the Falls lead to 52-45.
Aquinas answered though, and after two buckets by Jack Scanlon it was 52-50.
Prior to the second Scanlon bucket, a timeout was called. There, Wolverines coach Sal Constantino reminded his team to stay calm.
"We just said 'we're ok,' ... We said if we could continue to hit the boards and get the ball in transition and do what we've done all year were going to be fine," he said.
From then on, the Wolverines closed the game with a 16-5 run, as the vaunted Falls defense created chaos for the Aquinas offense. Aquinas finished with 22 turnovers, including five in the Wolverines run. Four of the five turnovers converted to 8 points for the Falls.
Along with the defensive pressure, Lightfoot had 10 points in the final quarter to put the game away.
As the final horn sounded, the Wolverines were able to pull away late, 68-55.
For the Falls, Dubois led the team with 15 points and Lightfoot finished with 12 points. Rose also added 10 points, while Gayle and Syquan Ralands added 8. Dubois also led the team in steals with six.
As for Lightfoot, Constantino said the pace of the game was just right for Lightfoot and that led to his fourth quarter success.
"If you watch him, you can still see the eighth grade in him still. He's a little frustrated, a little flustered and we keep saying 'Next play, next day. Gotta keep getting past it.' The fourth quarter became a hectic up-and-down type of game and that's where he flourishes," Constantino said.
Coming off a game where the Wolverines made 12 3-pointers Friday night, they only made three versus Aquinas. Constantino said the team stuck to its bread and butter of running in transition to substitute the need for 3-pointers.
"We have several presses and we try to push tempo up-and-down defensively, and offensively. I think what happened after a while was that we wore them down and we started to rely on our transition," Constantino said.
The win extends the Wolverines overall record to 11-3. Constantino said he learned a little about his team, as they won three road games in three days. The Falls defeated St. Michaels in Toronto Thursday, Niagara-Wheatfield on Friday and now Aquinas on Saturday afternoon, in Rochester.
"Our depth shows," Constantino said. "We can go nine-deep in a game, like in a close game. ... I think these games will only help us come playoff time."
The Wolverines are back in action Monday at 6:30 p.m. versus Lewiston-Porter.
Categories
School School feature Sports Sports feature