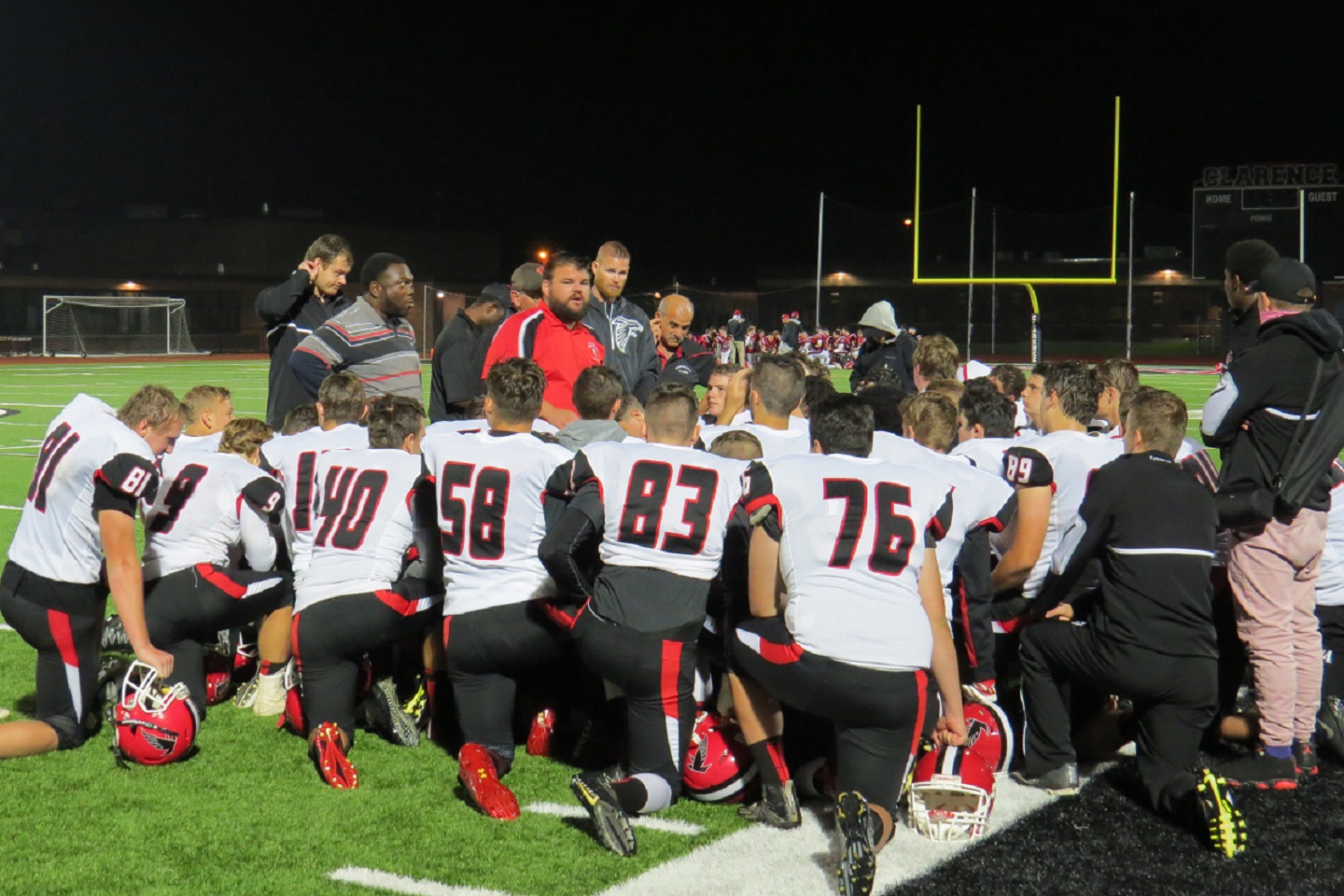 Sat, Oct 7th 2017 12:00 am
Falcons left with a must-win next week
By David Yarger
Tribune Editor
The Niagara-Wheatfield football team went into Clarence desperately needing a road win to boost their playoff chances. The Falcons couldn't put it together Friday night and they fell to Clarence, 42-29.
The loss drops the Falcons to 2-4 on the year and leaves them with a must-win situation next Friday night. The good news; the game will be the first home N-W football game under the lights. Secondly, it's homecoming weekend and the Falcons have played well at home, with a 2-0 record at Terry Harvey Field.
Coach Russ Nixon addressed his team following the game and stressed the importance of the Falcons last regular season game.
"I told them, we're far from out of it. We get to host at our venue, it's homecoming, it's senior night, it's under the lights for the first time; what more can you look for? We're hoping it's that electric atmosphere we talked about and that our home field advantage pays off," Nixon said.
Clarence took advantage early, recovering two onside kicks. The first came after their first touchdown which led to a fourth down stand for the Falcons. Wheatfield couldn't come through on the next drive, turning it over on downs, after a failed fake punt run that came up inches short of the first down. A play later, Clarence was back in the end zone and they led after one quarter, 14-0. Clarence then scored on their first offensive possession of the second quarter, making it 21-0.
Jordan Parks got the Falcons on the board with a 31-yard touchdown run, but Clarence came back with a quick touchdown pass, making it 28-7.
Parks answered the Red Devils' TD by leading the Falcons on a scoring drive before the half. His touchdown pass to Noah Mixon at the halftime buzzer cut the Clarence lead in half, 28-14.
Clarence answered, immediately out of halftime. A 40-yard touchdown run extended the lead to 35-14.
Parks refused to go down without a fight though, as he ran for his second touchdown of the night, this time from 32 yards out. Parks finished with a combined four touchdowns and 279 yards, through the air and ground.
Clarence would add another rushing touchdown, but the Falcons final score of the night was a bright sign for things to come.
Parks found freshman, Zion Paige for 36 yards and then 29 yards into the end zone for a Falcons score. Paige, playing in his first varsity game, was just called up from the JV this week. Paige finished with three catches for 70 yards and the touchdown, in his debut. He received high praise from Nixon.
"Another weapon in the arsenal," Nixon said. "We wanted him to work on it and get that leadership role on JV and we thought this was a good opportunity to bring him up. We thought he had a chance tonight to have some success and he did. So, it was nice for a young guy like that to come out here and not be lost in the moment."
The Falcons had chances late to try and get the game closer, but turnovers and penalties ruined any opportunity the team looked for. The game finished ugly with a minor scrum, but nothing came out of it. The scoreboard presented Clarence as the victor, 42-29.
The Falcons' next game is a big one at 7 p.m. on Friday, versus Williamsville North. The team needs a win to keep playoff hopes alive. Pre-game festivities are slated to start at 6 p.m.
Categories
School Sports Sports feature Tribune Tribune HP Feature List