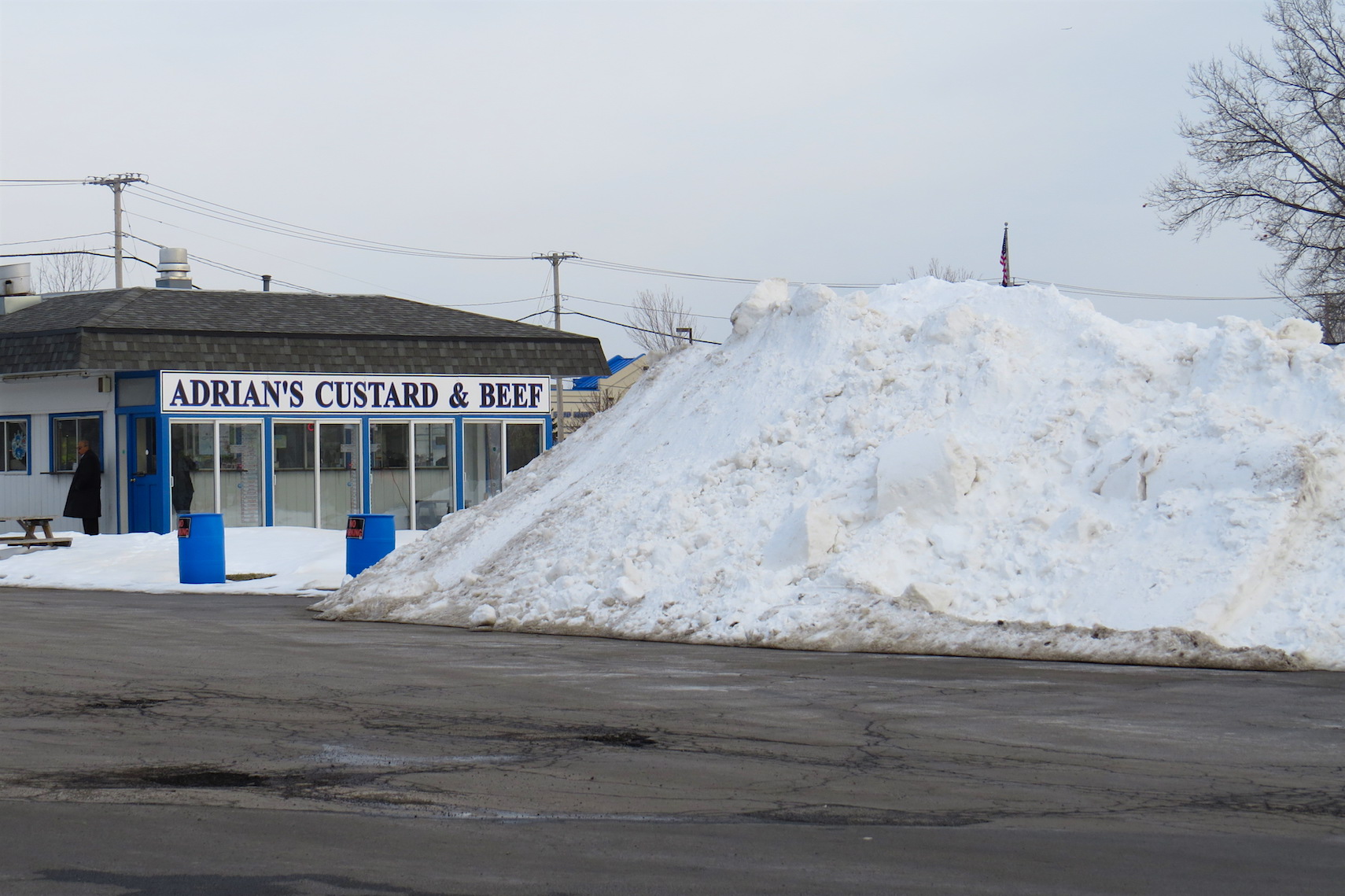 Adrian's Custard & Beef is now open on Grand Island ... despite the mounds of snow in the parking lot.

On Grand Island, it turns out they're not too bad in the winter, either.

Adrian's Custard & Beef, one of the Island's favorite warm-weather establishments, is open.

One can find it in between snow mounds that dwarf sport-utility vehicles, and nearly reach the top of road signs.

The white stuff is impressive, but it hasn't deterred customers one bit.

Waiting outside Adrian's pickup window for his order on Friday, Islander Elgie Kightlinger said, "It's a disappointment when it closes every year."

"I look forward to this opening. Now it opens earlier; it's amazing," he said.

"First weekend we came for roast beef and ice cream sundaes," Kightlinger noted. "Best roast beef on weck on the Island -- the best I've had ever. ... Absolutely amazing."

Even when it's freezing cold and snowy outside?

"If it's good, it's worth driving through for," he said.

As it turns out, the family-operated Adrian's began its 2017 season on Feb 21 -- weeks before most summer restaurants typically open in Western New York.

"One year we did have a blizzard; it was right around when we opened, and people were still here," ToniMarie Amantia said. "We had just opened and then we got this blizzard like on day two. But not as bad as this."

That customers would brave the elements just days removed from the heaviest snowstorm of the season, "Is a really nice compliment," Amantia said.

Islander Dave Sugg and his family of four also made the trek out to Adrian's on Friday.

His 7-year-old daughter, Madelyn, said she didn't know what to think about eating ice cream next to giant piles of snow. But she was happy to give it a try.

"It's pretty neat," her father said. "We've been watching and following (Adrian's) on Facebook to see when they're going to open back up."

In terms of hours of operation (presently 11 a.m. until 8 p.m.), Adrian's is ramping up for spring and summer. Hours will expand first in about mid-April and then again in mid-May. In the kitchen, however, the restaurant is now serving all menu items.

Plus, "We are introducing more Adrian's homemade kinds of things," Amantia said. "We're making our own strawberry and banana milkshake base, all from fresh fruit. We are making homemade cookies in the building and filling them with Perry's custard -- and they are delicious."