Lake Effect is the only artisan ice cream shop in Western New York. It serves not only ice cream, but also makes homemade ice cream sandwiches, sundaes, milkshakes and icicles.

The ice creamery was opened with the goal to be the best in the business.

Lake Effect, located in Lockport, along the Erie Canal, has benches overlooking the historic Flight of Five lock system on the canal, a freezer comparable to a treasure chest full of treats to enjoy or take on the road, a carefully hand-drawn menu, and a seating area that's rarely empty.

No matter how many people are in line, the employees always deliver top-quality service.

Also featured in the shop is a very large award wall that shows accolades such as:

The combination of an ever-increasing fan base and consistently working hard has enabled Lake Award to win these awards.

"Our keys to success has been the drive to be creative, willingness to work hard and our desire to embrace the best things from our unique city, and incorporate them into our ice creams," Wulf said.

Lake Effect Artisan Ice Cream usually closes in early November, but Bernardi and Wulf recently decided to keep their business open throughout the winter. There was always a plan for Lake Effect to become a year-round shop, and this year they decided to strike while the iron is hot.

"We've always had it kind of in the back of our minds that we've always wanted to try it. This year was a really good year; more and more people came; we keep getting better and better summers," Wulf said

New menu items and ice cream flavors will be created and introduced to an already creative menu that features flavors such as:

One new item that has been announced for the winter season is the Warm Front Float.

"The thing I'm most proud of now is the Warm Front Floats. I think they're creative and a new way to get a hot chocolate or a hot cider," Wulf said. 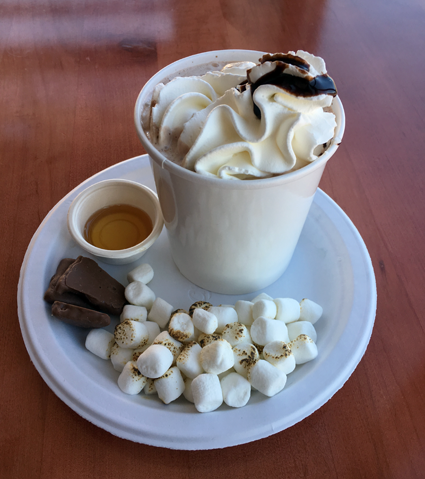 Lake Effect customer Michele Ulanowski of North Tonawanda was enthralled at the possibility of being able to come back throughout the winter months.

"Oh that's great!" she said, as she ate with a friend. "We were actually here for one last dessert before they (Lake Effect) closed down for the winter. We'll have to come back in a few weeks."

It is actually convenient for Lake Effect to stay open throughout the winter.

"We decided that this year we'd give it a shot, because we're in the building in the winter making ice cream anyway," Wulf said. "We're heating it (the building) and doing our stuff in there already, so we thought this would be a good year to give it a shot."

One thing that was made clear was that nothing is changing just because Lake Effect will be open longer.

"We're in the process of purchasing a building probably about 300 yards away. We are turning that solely into a manufacturing building. It's just around 7,000 square feet. Our intentions have always been to have a few shops around the Western New York area, but we need a much bigger kitchen to be able to do that," Wulf said.

Lake Effect also sells its ice cream in other locations. According to the website lakeeffecticecream.com, several supermarkets across Western New York carry Lake Effect's pints in their frozen foods sections, including several Wegmans and Tops supermarkets.

Franklin Heinzmann wrote this article as part of his CMS 120B communications study class at Niagara University.