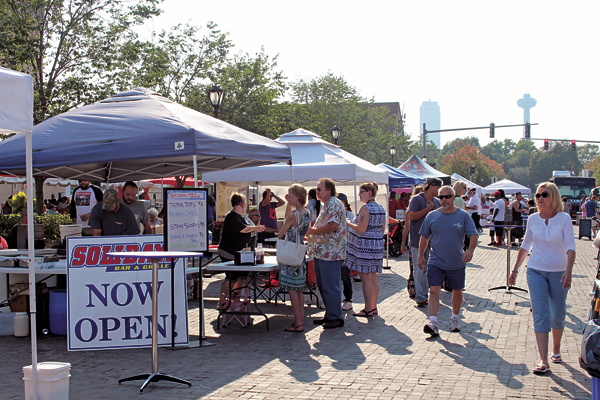 Shown is a scene from last year's Taste of Niagara Falls. This year, the event will take place from noon to 8 p.m. Sept. 3 and 4 on Old Falls Street.

Taste of Niagara Falls to dish up more options

Locals and visitors alike can add some flavor to their Labor Day weekend by visiting the second annual Taste of Niagara Falls, to be held from noon to 8 p.m. Saturday and Sunday, Sept. 3 and 4, on Old Falls Street.

The event will feature approximately 30 food vendors from the Niagara Falls area serving up their signature dishes. Some of the participating vendors include The Como Restaurant, Viola's Submarine House and The Meeting Place.

"(It) gives everyone the opportunity to experience the best of Niagara all in one event," said event organizer Corey McGowan of Corey McGowan Productions. "We're attracting the locals that want to hit all of it and, really, the newcomers, too, that might live in Tonawanda or Buffalo or Grand Island. They get to come and find and discover all this great cuisine."

The Taste of Niagara Falls is open to the public and admission is free. Food tickets can be purchased at the event's entrance and will be sold in dollar increments.

This year's menu will feature live, local music and roughly double the vendors who were available to eventgoers last year, McGowan said.

Due to the increase in offerings, the event will likely span over two blocks of Old Falls Street, where, free interactive games and activities will also be out in full force, including shuffle board, table tennis and a new Lego wall.

"Being down in Old Falls Street, right in the center of downtown Niagara Falls, is just perfect," McGowan said. "So, really that's going to help us grow the event tremendously."

McGowan said he enjoys putting on street festivals and other forms of entertainment that can "bring the community together just for a good time and (to) benefit the local business, too."

He has put on the Taste of Grand Island, as well as a local concert series and the Gus Macker 3-on-3 Basketball Tournament. He also plans to add "Taste of Lewiston" to his lineup next year.

These types of community events give "so many businesses this extra, added exposure to, ideally, create repeat customers and build the business throughout the year," McGowan said. "This will be the fifth year for the Taste of Grand Island. Living and growing up in this area, I've always had an interest in Niagara Falls. Now, once Taste of Grand Island established itself, I guess (I) wanted to showcase Niagara Falls because Taste of Niagara Falls wasn't something that existed. And I definitely saw a need for it, because it is such a great community. So, we started it last year and we're really looking forward to getting bigger and better every year."

She said the event will, hopefully, spur more economic development in the downtown area.
"That's what Old Falls Street and our programming is here for. Really, I think sometimes proprietors might want to get their feet wet a little bit by becoming a vendor first before they might be looking toward brick and motor opportunities and that kind of thing."

Overall, McGowan said his goal for the Taste of Niagara Falls is "to keep building it every year, building it with more restaurants, more eventgoers - really make it one of the premier events in Western New York."