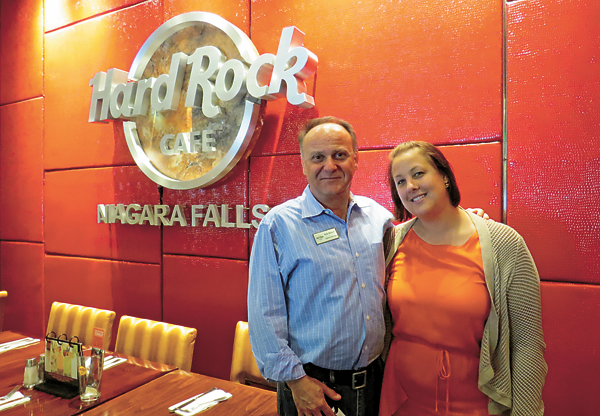 Just because Hard Rock Cafe, Niagara Falls USA, is a chain, doesn't mean it's like other restaurants.

For starters, the Prospect Street eatery goes out of its way to support agencies and entities working for the betterment of the less-fortunate in the Niagara Falls area.

"We do have a soul to us," General Manager Bob Bloom said. "Our philanthropic activities are core to our business fundamental and our business model."

He explained, "One of our founding partners, Isaac Tigrett, was a practicing Hindu, and, as part of his restaurant concept, he brought in a series of, we originally called them mantras. ... All based on the Eastern tenants and philosophies of the Hindu religion."

It's from that ideal that popular Hard Rock slogans "Love all, serve all" and "Save the planet" were created.

These phrases are more than just words; they're "very instrumental to how we interact with each other," Bloom said.

"And how we run our business," Sales and Marketing Manager Claire Seveno said.

"More importantly, how we interact with our community - whether it's our immediate community or our greater global community," Bloom said.

He shared, "There's the story of how Isaac - 35 years ago - was in New York for Thanksgiving, and decided that the café ... which was in midtown near Macy's, and traditionally one of their busiest days of the year. ... Isaac was there and told the general manager, 'You know what? Today you're closing. Here's a pile of $20 bills. Start passing them out to every cab driver you see, and tell them to start bringing people who need to eat to come to the café. We're closing, and feeding those that need it.' And the GM said, 'OK,' and they did it."

"Hard Rock Cafe, Niagara Falls USA, has been a wonderful partner of Community Missions," said Christian Hoffman, the agency's communications and development manager. "For the past 17 years, the Hard Rock has graciously provided Thanksgiving dinner to hundreds of Community Missions' guests. Last year's dinner served close to 300 guests, each of whom were able to select items including clothing, toiletries, blankets and other necessities following their meal. This was completely organized by the staff, who, along with their families, come in on Thanksgiving to serve the meal.

"What a wonderful blessing this partnership has been, not only to those we serve, but also to our staff, who are able to enjoy the holiday at home with their families. We look forward to continuing to partner with Hard Rock for the next 20 years and beyond!"

Hard Rock employs around 100 people, and "A lot of our staff has gone to NU or NCCC, so they've been down in this area for four years, even if they're not from this area," Seveno said. "They have a lot of pride. They see the tourists that come through the doors and the whole area. They care about the area as a whole, as we do." 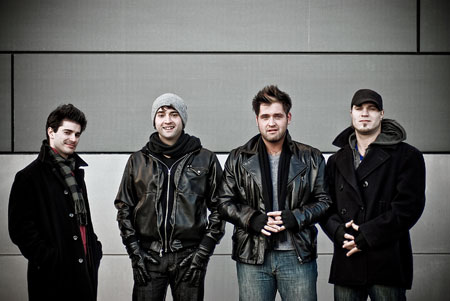 While each Hard Rock location has memorabilia from an array of famous musicians, only one, the Niagara Falls site, has a room dedicated to local music royalty.

Three years ago, the restaurant teamed with the Buffalo Music Hall of Fame to create a space where Western New York artists would be recognized. The BMHOF room has items from artists including Ani DiFranco, Rick James and Brian McKnight.

"That was one of the most brilliant things that was done, that partnership," Bloom said. "They are strong and caring friends, supporters. They keep us engaged in the local music industry."

Richard Sargent, a 2008 BMHOF inductee, current board member, and noted producer/promoter, said, "It's a class place. They bring in some cool stuff."

Sargent noted the writers of "two of the most played songs in history - the 20th century and the 21st century - they're both members of our hall of fame." Items from both Harold Arlen ("Over the Rainbow") and the Goo Goo Dolls' John Rzeznik ("Iris") are on display in the BMHOF room.

"We have a couple of events a year. We're going to start having more," Sargent said. "It's been very, very good for us. Since we've been doing it, our international hits on the website have skyrocketed - through the roof - from tourists coming in and wanting to know more about it."

In this case, Hard Rock's chain status serves as an added bonus.

"For out-of-town people, it really adds a lot of credibility," Sargent said. "It's a class name. It's got a great brand to it. The brand name means something, and they stand behind what they do."

"And there's only one of us in the Western New York area, and (we're) one of only three in New York state," Bloom said.

"That, I think, sort of separates the experience from I would call it every other clone style of restaurant," Bloom said. "We definitely are a premium, specialty experience."

Sargent said he appreciated Hard Rock's work in both promoting Western New York artists and providing them with a stage.

"It's a good place for locals," he said. "It's kind of cool for some of the local artists that they can have their out-of-town friends come in and see the falls, and have a nice dinner, and watch them play."

Bloom said, "Music is our differentiator. It's sort of what sets us apart."

"We want to give people the opportunity to come in and play their music," Seveno said.

When people think of chain restaurants, they often imagine frozen fare thrown into a microwave or items coming out of a box or a bag.

That's not the case in Niagara Falls.

"We're pretty much a scratch kitchen," Bloom said. "The burgers are never frozen. The guacamole is made in house. The pico is made in house. We use Costanzo's Bakery for our breads. We have a local bread program.

Bloom said many kitchen workers have served for years and, "they're very passionate and caring about what they do."

To celebrate, "(July) 8th and 9th, which is a Friday and a Saturday, will be a pin event," Seveno said. "We'll start it off Friday evening. We're bringing in probably 100 pin collectors from the Northeast."

Saturday morning is when the real collectors' event begins.

"For anyone who's into small things - and collections of small things - it's a unique experience," Bloom said. "They arrive with suitcases of pins. All Hard Rock, and all over the world. Generally they're here to trade, but they love sharing their collections and stories. It's not unusual to have collectors that have visited 50 or 60 cafes worldwide, and have taken home pieces of them."

Saturday's activities are open to the public. Trading and new merchandise release is scheduled for 10 a.m. until 2 p.m. in the tent behind the restaurant. Limited-edition 20th anniversary pin and glassware sets will be available.

"The next Saturday (July 16), we are doing an outdoor concert on Old Falls Street. And our headline performer is the Gin Blossoms," Bloom said. "It starts at 6 o'clock. We're calling it an inclusive, as opposed to an exclusive concert. Open to the general public, it is free. All ages.

"We will have a food tent set up in our parking area. ... Old Falls Street and (Spectra Venue Management) are partners with us, and they, too, are doing vending. Our music starts at 6 with two (local) bands."

Editor's note: In the interest of full disclosure, Niagara Frontier Publications is the media sponsor for the Hard Rock concert featuring the Gin Blossoms. 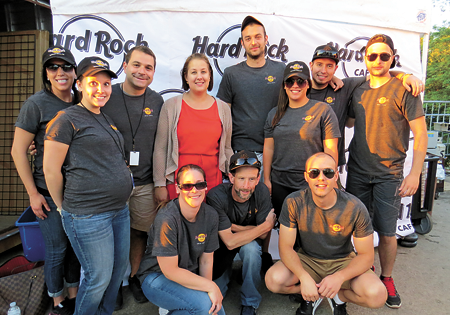