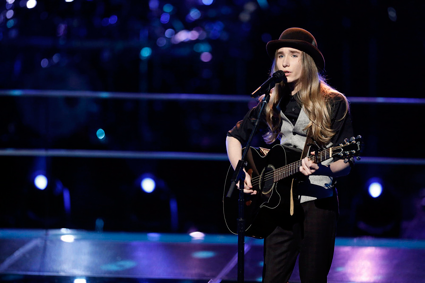 'The Voice': Keep an eye on Caitlin, Kelsie and Sawyer

As NBC's "The Voice" draws closer to live shows, three singers have emerged as frontrunners for this season's crown.

Following the first "Battle Round," two-chair turns Caitlin Caporale and Kelsie May, and four-chair turn Sawyer Fredericks stood atop the field of 32 performers.

"I would buy a ticket to this show, like, everyday - every night of the week," coach Blake Shelton said.

"Caitlin, when she gets on a note and holds it, there's just no vibrato; it's just this straight line of sound that hits you," he added. "And it is impressive."

"That was crazy," coach Adam Levine said. "I thought you were both fantastic. I really do.

"Caitlin, I think you could win the show. That kind of power and control - and with the right songs - I just see you making it really, really far on the show."

"You were both wonderful," he added.

"The Voice": Caitlin Caporale in the "Battle Rounds." (NBC photo by Tyler Golden)

Coach Pharrell Williams complimented Caitlin on her improvement from practice. He and squad mentor Lionel Richie had encouraged her to aim higher.

Pharrell gave the "Battle" to Caitlin.

"I'm just so happy and so relieved and excited," Caitlin said after the "Battle." "It means everything for me to be moving forward. It's a validation that my hard work paid off, and I'm so grateful to Pharrell."

"I had to go with Caitlin, because I felt like she was further along," he said. "I see Caitlin as the great R&B pop artist. (I) can't wait to work with her."

Though Caitlin has twice been told she can win "The Voice," she told BTS, "I think that us, as artists, we can always do better. So I'm striving to just work on my voice and my performances and make sure that the one is better than the next and really show America what I've got.

"I've been waiting to do this type of show before, and I'm so grateful that I have this opportunity to grow. And, yes, I'll just take it to the next level. There's always something to learn."

Pharrell has stressed the importance of delivering complete performances. He's told singers it's not enough to have a strong voice.

"Yes, I mean, Pharrell really gets deep down inside. He has these one-liners that really stick in your mind. And he just wants us to be the best version of ourselves," Caitlin said. "He wants to pull out everything that we've got. So he's really helping me to gain more confidence on that stage and to not be in my head so much and to just go for it. So I'm really grateful to have Pharrell to grow as an artist and a person." 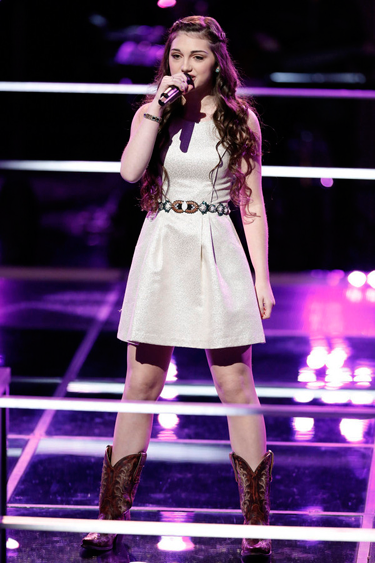 "The Voice": Kelsie May performs. (NBC photo by Tyler Golden)

16-year-old Kelsie May auditioned for "The Voice" with a cover of Loretta Lynn's "You're Lookin' At County." Without a history of stage performances, she was clearly nervous. Still, she earned "I Want You" chair turns from coaches Blake and Adam.

When it came time for her second turn on "The Voice" stage, the "Battle Round," she was paired with fellow country singer Brenna Yaeger. Their assignment was Reba's "Fancy."

Christina said both singers were "on 10" the whole performance.

"Kelsie, you have, like, this really strong tone - it just really cuts through," Pharrell said.

"They both are incredible," he added.

"Trust me: I'm nervous," she replied. "I'm literally shaking in my boots."

As Kelsie and the coaches shared a laugh, Adam said, "Now you look nervous. But you didn't when your posture changed when you started singing. There was assertiveness. And I think that's the difference between the two of you guys.

"And if I'm Blake, it's really hard not to go with Kelsie. I think you're furthest along at this point in time."

"I think your voice naturally cuts through some of that (nervousness)," he added.

"I haven't been singing for very long, and to be here and to move forward to 'Knockouts,' I'm so happy," Kelsie said after the "Battle." "I have dreamed about this since I was this high off the ground (raises hand to waist), and I just want to make something of myself."

"I think Kelsie was able to show a little more confidence on stage, and that's really all it came down to," Blake said.

"She was walking around on that stage like Wonder Woman, to me," Pharrell said. "She was so confident."

"Yes! That's what scary to me," Pharrell said.

Kelsie was the second round's most improved singer. She credited Blake and team mentor Meghan Trainor.

"In my blind audition I was probably the most nervous I had ever been before, because this is a totally different experience," Kelsie told BTS. "But after having Meghan and Blake critique me and just give me a big boost of self-confidence, it definitely helped with my performance aspect, because I felt like I had this validation, like, that they both really believed in me.

"So I just felt a lot more comfortable on the stage. And, plus, it was easier, because you have someone up there with you at the same time. And me and Brenna are, like, best friends, so it was a lot easier to be able to perform with her."

"The Voice's" youngest competitor, 15-year-old Sawyer, offered one of the best blind audition performances - and one of the most publicized - on the way to four chair turns. It seemed he was comfortably on his way to the live shows. But in the "Battle Round" he would have to do two things he's never done before: harmonize with a partner, and win a competition.

Sawyer teamed with 17-year-old Noelle Bybee on a version of Creedence Clearwater Revival's "Have You Ever Seen the Rain."

"You guys were singing together," Adam said. "Like, all the things that you did were done with so much care for the other person. And I think there was a lot of artistry in that.

"To both of you, I applaud you. ... But (Pharrell) you have to go with Sawyer, just because it boggles one's mind when you listen to Sawyer sing."

"Sawyer, there's no teaching what you do," Christina said. "If anyone can appreciate that, I know it's this guy here (points to Pharrell), who's uber-talented. So I'm glad that your gift is in his hands."

"First of all, let me commend you both," Pharrell said.

"Sawyer, to be as good as you are, and have zero ego, takes a lot," he added. "And to see you really embrace your partner for the benefit of a great performance - I can't commend you enough."

"I appreciate you both," Pharrell said. "I do."

"I'm extremely happy," the singer said after the "Battle." "I do think I made the right choice picking Pharrell. He really lets me do my originality. It's really awesome."

"Sawyer, I think, has what it takes to win this show," Pharrell said. "He has a very bright future."

The next day, Sawyer told BTS, "That was the first time I ever did a harmony, so that was a pretty different experience for me, and it was difficult to just really hold back. And, like, I really wanted to give (Noelle) good times to shine in the song and that was kind of my (process) throughout the thing.

"And I think what I learned most from this is really just to be able to work with another person and work on a song with them. I've never really, like, worked on a song with someone and have their ideas for it, and it was definitely a new experience for me."

Caitlin, Kelsie and Sawyer will next compete in the "Knockouts." "The Voice" continues Mondays and Tuesdays at 8 p.m. on NBC.