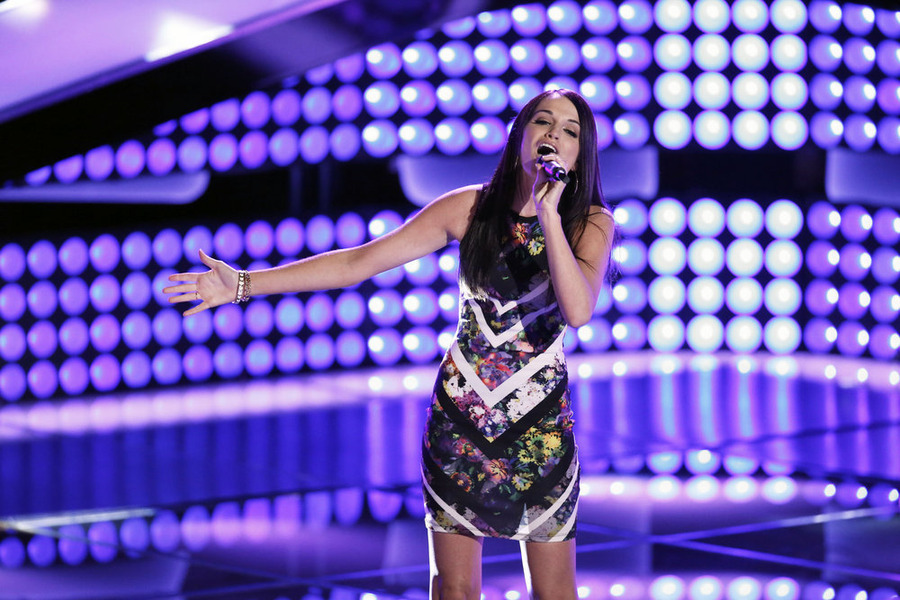 Inasmuch as the coaches on "The Voice" enthusiastically hit a button triggering a giant, glowing "I Want You" sign to appear, we know they don't always mean it.

In either case, there are occasions when it's hard to believe a coach genuinely wants to work with a performer for the duration of the season.

As the blind auditions came to an end, and the "Battle Rounds" began, there were, however, a handful of singers whom the coaches clearly and legitimately wanted for their respective teams. 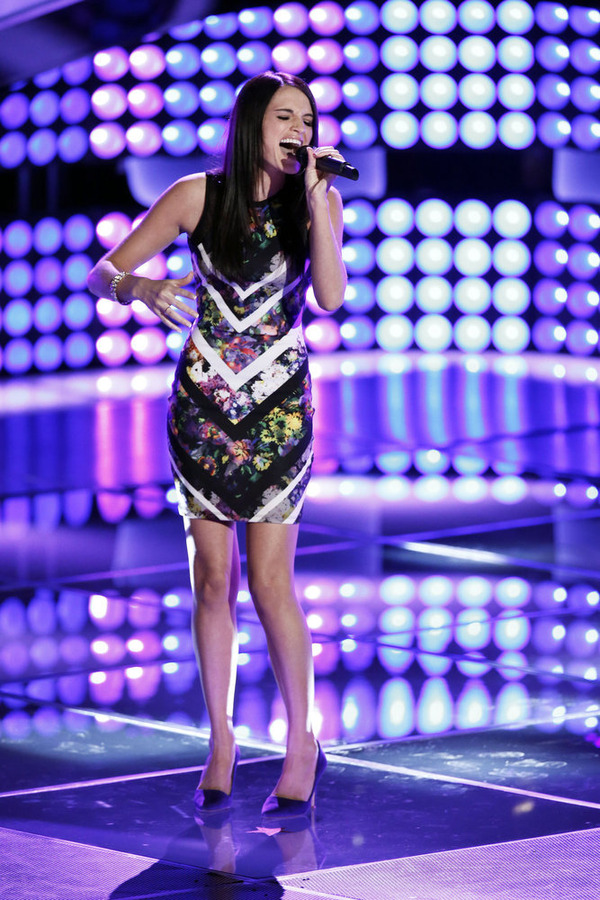 When 23-year-old Caitlin Caporale performed coach Christina Aguilera's song "Impossible," it was possible to see the Newburgh R&B singer sticking around until the end.

Christina lamented her team was full when Caitlin performed, or she would've hit her button and turned her chair.

"I am so angry," Christina said. "First of all, thank you so much for doing my song. I was back there going like this (pounds button). I'm deactivated, because my team is full.

"I truly believe that I'm looking at somebody that can win 'The Voice' this year. I do think that."

"You were just, like, graciously directing the notes around with your fingers and floating around," he said.

When it seemed Caitlin was leaning toward Pharrell, Blake made one last-ditch effort to win her over.

"I know that you're probably thinking, 'Yeah, but you're a country singer,' " he said. "But, my job is not to get you to sing anything other than what you have your eye on.

"I'm a coach - that's what I do on this show. And I just want to help you through this process as best I can."

Pharrell would not back down.

"(Blake) really said some compelling things, but if I had, like, a shot with your voice, we would do a lot of warming up on this show to get you ready for where you want to go after the show," he said.

Caitlin chose Pharrell. In a postshow interview, he said, "Caitlin definitely could win this competition. And for her to pick me, I have to cherish it - and I have to really work hard."

"Well, when they said that I could possibly win the show, I mean, I felt like I was living in a dream," Caitlin told BTS. "It was really so surreal. I kind of blacked out during the whole thing. But that really stood out to me when they said that. So I was so grateful.

"I mean, I know sometimes they say that. But I really felt like they meant it.

"And it adds a little bit of pressure because, you know, I have to stay up on my game and I have to bring it every time. But I'm up to the challenge. I'm ready for it."

Christina surprised Caitlin when she invited the singer over to her chair for an impromptu "Impossible" reprisal.

"After I chose Pharrell and then he gave me the hug, Christina came right up after him and she's like, 'Come over here.' And I'm like, 'What is going on right now?' And she was, 'Come sit in my chair.' And at that point I'm thinking I'm just going to be sitting in her chair. And that was enough for me.

"And I'm looking around and she's like, 'Let's sing together.' And I'm like, 'I cannot believe this is happening to me right now.' And I thought to myself, 'Don't mess up. Just make sure you sing this. Don't hit a wrong note.' So then I just went for it.

"And it was really all the emotions coming at once. I mean, I've never seen her in concert. So the first time for me to hear her sing is with me - in front of me. It was just a dream come true." 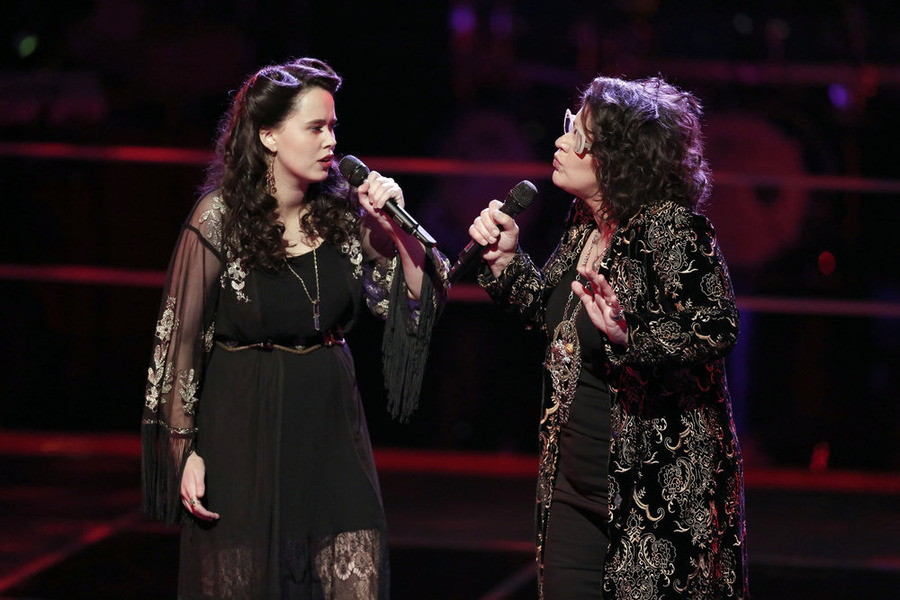 Speaking of coaches hitting their buttons, Christina, Pharrell and Adam each had complete teams when 20-year-old Hannah Kirby auditioned. But that didn't stop them from slapping their buttons to tell Blake, who was in need of one last team member, they would've competed for her services.

"We were all super angry," Adam said, as he told Hannah he and the other coaches were feverishly beating their buttons to no avail.

Blake did hit his button, of course, and selected Hannah for his team. He told her, "The absolute raw power of your voice is amazing.

After the show, Blake said, "Hannah's a spot-on incredible singer."

Pharrell told Hannah, "You are like a siren." He praised the high note she struck after Blake turned his chair. "You were like, 'Let me show you what I can do; I'm just going to go zero to 60 right now.' "

While both singers were up to the challenge, Pharrell and Adam said Hannah was superior.

"Let me tell you about that Hannah," Pharrell said. He referenced a spot in the duel where Hannah charged back to the middle of the stage to belt out a portion of the song.

"That was incredible," Pharrell said. "And especially the moment where you were, like, 'Oh, oh no you don't.' And she ran over there and was like, 'No. Not today. They are going to hear me, too.'

"That made this 'Battle' so incredible. And today, I think you've proven, Hannah, that you are afraid of no one."

Christina, meanwhile, said, "I knew, Sarah, you're a force to be reckoned with. What I didn't know was Hannah was going to come out here just, like, blowing it out of the water, too."

Blake, perhaps knowing Hannah had a better chance of being stolen (and wanting to keep both singers in the competition), selected Sarah. 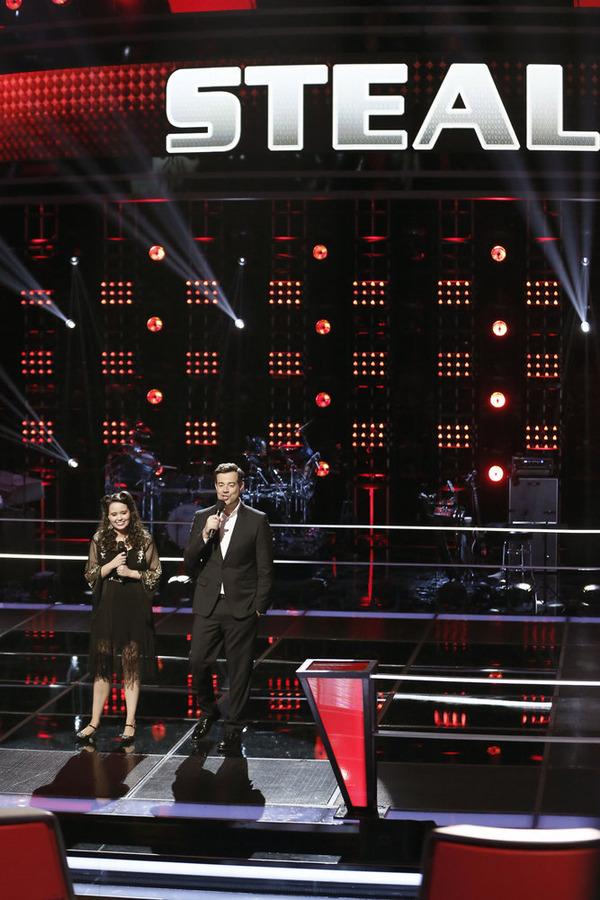 Sure enough, Adam and Pharrell immediately hit their button to steal Hannah.

"Hannah, I can't believe what I just witnessed," Adam said. "It was almost like she was Janis Joplin and you were Stevie Nicks. It was like watching these two [email protected] just kill it.

"I did tell you that I thought you won this 'Battle.' ... I don't know how you can't go extremely far on this show, and I think I can help you do that - I know that I can."

Pharrell said, "I saw something on that stage, and I'm willing to listen to it, and figure out where it wants to go. I'm not going to try and change you and turn you into anything else other than what you want to be.

"I just want the opportunity to work with someone like you. I've never worked with anyone like you before."

He told Hannah's parents they should be proud of their daughter. Hannah, meanwhile, told BTS her performance stood out because of good teamwork.

"Well, Sarah and I just - we worked really hard on the song," she said. "And I think just spending so much time on both of us wanting to be in sync - like we both wanted it to be so good - not only for ourselves, but for each other, so that the 'Battle' would be the best that it could be. And I think just all of that work just turned out a really fantastic product for both of us."

"The Voice" continues Monday and Tuesday at 8 p.m. on NBC. Find more about the show online at www.nbc.com/the-voice.