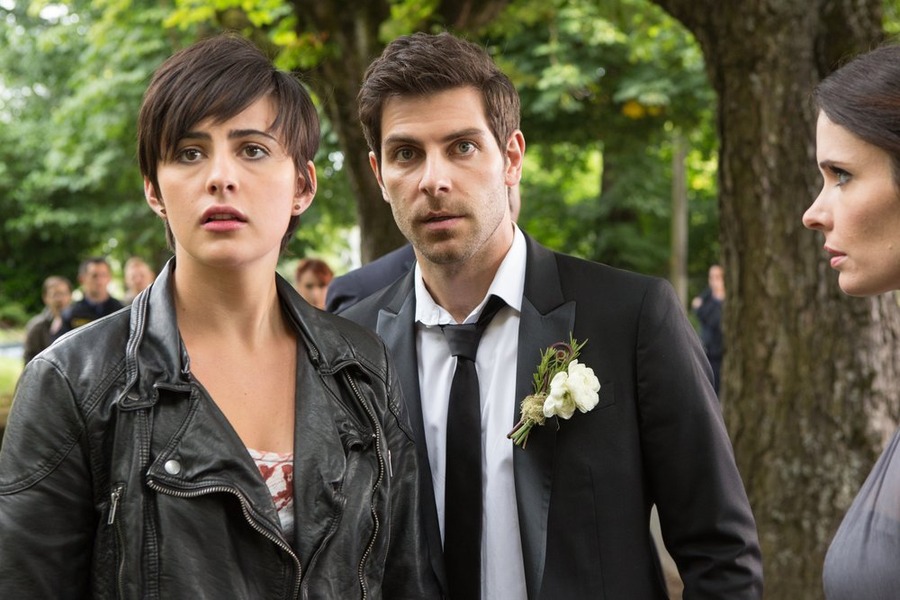 No, she doesn't have a liger, but her skills include hand-to-hand combat and boxing, she can use a quarterstaff, and her mythical character on "Grimm," Trubel, hacked off the head of an assailant in the season three finale.

As it turns out, Napoleon wouldn't be alone in his fondness for the San Francisco native.

Toboni is a breakout star on NBC's top-rated Friday night series, "Grimm." Her acting - fighting included - has been a welcome addition to a show known for its tight writing and stellar cast.

She made an appearance last week on "The Late Show with Craig Ferguson."

"He's a great guy," Toboni told BTS Wednesday. "He is a comedic genius, and if you go with the flow, he'll take care of you for the most part.

Toboni has no, well, trouble, convincing us she is Theresa "Trubel" Rubel, a tough, street-smart Grimm who grew up unaware of the Wesen among us.

Trubel was in rough shape when introduced to audiences last season. Initially, she thought she was crazy, watching people "woge," or change into their alterna-selves. She even had to kill a few Wesen (one, in particular, who wanted to make her dinner, but not in the romantic sense).

As Trubel made her way across the country, the one-time foster child found herself in Portland, where Det. Nick Burkhardt (David Giuntoli) had recently discovered this same weird world lurking beneath the surface. He took her in, shared what he knew about being a Grimm, and, alongside his girlfriend, Juliette (Bitsie Tulloch), sort of adopted her into his family.

Well, cut to season four, and Nick is without his Grimm powers (it's complicated), making Trubel Portland's one and only Grimm.

"She's really, really, really excited about it," Toboni said. "Not just to be a Grimm and kind of kick @ss, but she's excited to kind of pay Nick back. I think she's so thankful that her life has taken a turn (for the better), because she didn't know about any of this. And she feels indebted to him for all he's done. He not only showed her what a Grimm was, explained this world, but he took her into his home. I could've been a threat to Juliette. ... This bond we have is sort of a familial relationship."

"I think she's just excited to do something," Toboni said. "I think you saw it ... in the premiere of season four. There's this moment where he has to ask for her help, which he doesn't like doing, because he doesn't like putting her into trouble. And she's just all smiles, and is like, 'Yeah, no, for sure. I'm 100 percent in.' She just cannot contain her excitement - even though she tries." 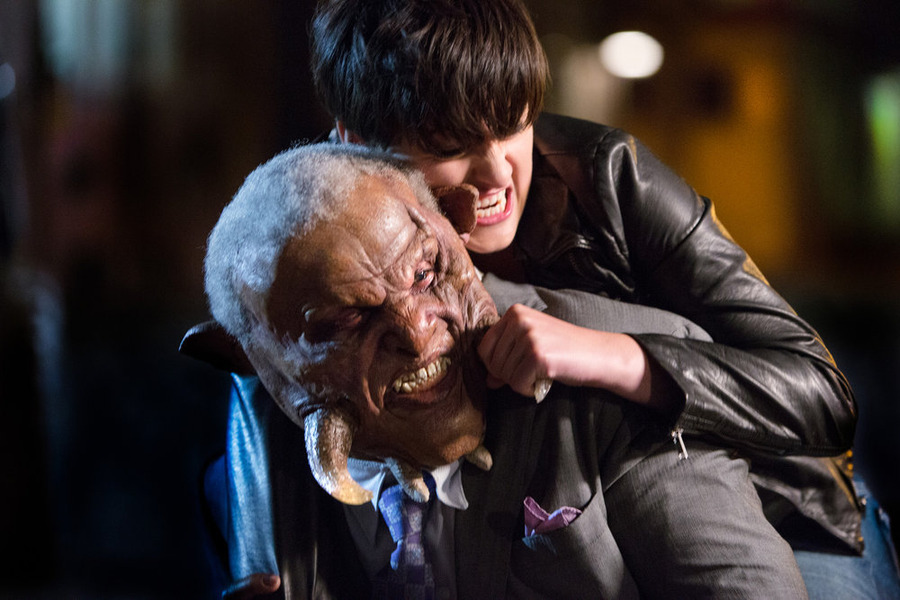 Giuntoli recently told BTS and friends that Trubel "becomes more ingrained in the fabric of our lives. I desperately need to teach her what it is to be a Grimm. It's not just a free pass to go kick Wesen @ss all day long. I try to show her the finer points. ... I try to tell her that I would actually try to use the law before I would just, you know, go all rogue and Grimm."

"The fighting and that stuff is all instinctual for (Trubel)," Toboni said. "She doesn't necessarily need a lot of practice in that, because she's been defending herself and she's a survivor. But now she's starting to get the other side of things: This being able to study and identify Wesen. Every single time she's not on screen, she's in that trailer studying while all the characters are doing something else. She's really committed."

Hands down, one of the coolest moments on television last season was when Trubel took a machete and chopped off Weston Steward's head. The loathsome villain - a corrupt FBI agent and Hundjäger (nasty, hound dog-like Wesen) had just shot Capt. Sean Renard (Sasha Roiz) and left him for dead. He would've done the same to Trubel, but, surprise, she's a Grimm!

As fans watched with amusement, and Steward's head rolled down the stairs, Trubel was cemented into our minds as one of "Grimm's" great characters.

Toboni earned extra acclaim for doing her own dirty work.

"(Laughs.) That's become quite the topic of conversation," she said. "I actually insist, heavily, on doing all my own stunts - definitely, without a doubt, all my own fights. So I'll do everything. My stunt double, who is great - really talented, and really respects my desire to do things - she'll walk me through it and teach me. And, you know, it's easier to cut everything and to edit everything together when you have the real deal doing it, you know? She is really supportive in helping me do that."

As it turns outs, fighting a Wesen is nothing compared to roughhousing with siblings.

"When you grow up with three brothers, you have to learn how to handle yourself, that's for damn sure," Toboni said. "Growing up, I was an athlete before I was an actor. So, just in terms of my athletic ability, I feel like it's above par for some other people that are great dancers, or started in theater and kind of stuck with theater, or acting."

"I think it's one of the reasons I got the part," she said. "They could see that I was really comfortable in my body and doing this.

"In my first audition, I walked in and I threw myself on the floor and was thrashing and kicking, and they were like, 'OK; we know what we're getting into if we hire this person.' "

What we see on screen, of course, is fictional. In real life, Toboni does not dress or act (or thrash) like Trubel.

On his talk show last week, Ferguson did a double-take when he saw the attractive actress dressed in heels and a short black dress.

If was as if she had woged right in front of him.

"It's actually the most common reaction I get when people recognize me on the street," Toboni said. "They're like, 'Oh my gosh!' "

"I was walking with Silas, who plays Monroe, and he's a crowd favorite across the board, so people always stop him on the street in Portland," she said. "I was with him, and somebody stopped him and was like, 'I'm a huge fan. I've seen every single episode. I'm all up-to-date and I absolutely love the show.' ... And (Silas) was like, 'But you don't recognize her?' They were like, 'Oh my gosh! You look so different in person! I had no idea.' All this stuff. And they're like, 'You look much more attractive than you do on the show.' And people say that all the time. It's like, 'Well, I appreciate that, because 5 million people are seeing me that way.' "

Hopefully, for many more episodes to come.

Catch Jacqueline Toboni on "Grimm" each Friday at 9 p.m. on NBC. 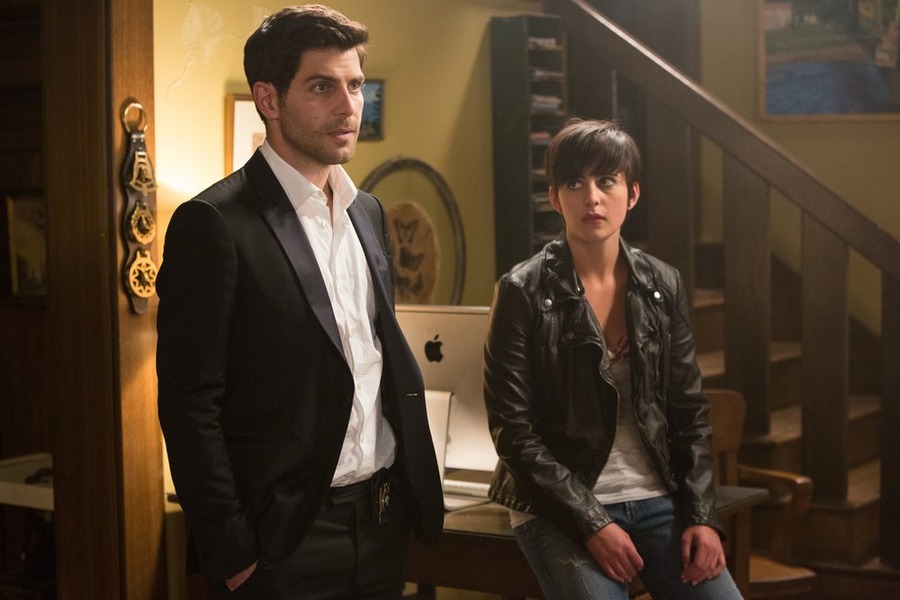