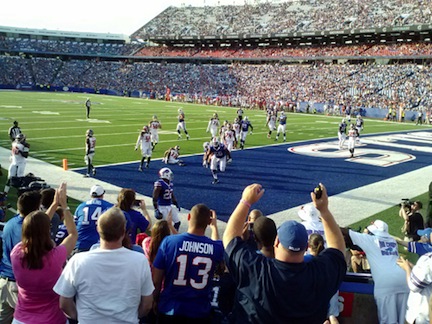 The Buffalo Bills are expected to remain ... the Buffalo Bills, much to the delight of fans like the ones pictured at The Ralph. (photo by Terry Duffy)

Buffalo Sabres owners Terry and Kim Pegula are set to become the next owners of the Buffalo Bills.

"Our interest in owning the Bills has everything to do with the people of Western New York and our passion for football. We have knowledgeable, dedicated fans here and, along with our ownership of the Buffalo Sabres, it is gratifying to reassure these great fans that two franchises so important to our region are both here to stay.

"We are grateful to Sen. Chuck Schumer and Gov. Andrew Cuomo for their support and desire to keep our Bills in Western New York where they belong, and to our team of professional advisers at Allen & Company and Sherrard, German & Kelly. We would also like to thank the staffs of the NFL and the Bills for helping to guide us through the sale process. We now look ahead to the NFL review process in accordance with league policy. If awarded final approval, we will be driven to achieve a singular goal: To win a Super Bowl for our fans.

"Out of respect for the continuing sale process, until league approval is attained, we will have no further comment."

Earlier today, ESPN's Adam Schefter reported the Pegulas had a tentative agreement to buy the Bills. WGRZ Sports Director Adam Benigni said he had two sources indicating the Bills reached an agreement with the Pegulas.

Both media outlets said the next step is for the new owners to gain approval from the NFL. The sale is expected to be finalized in the next few weeks.

WGRZ referenced a CBS Sports report, which estimated price tag for the Bills at between $1.1 and $1.4 billion.

The Pegulas beat out two other groups submitting bids to purchase the Bills: one led by celebrity real estate developer and TV personality Donald Trump, and a second submitted by a Toronto group partnering with rock 'n' roll legend Jon Bon Jovi.

Terry and Kim vowed to keep the Bills in Western New York, which made them the popular choice to purchase the team.

The Bills released a statement on the team website that read, in part, "The process for the sale of the Buffalo Bills has taken a significant step forward today as a definitive agreement has been reached between the trust of the late Pro Football Hall of Famer Ralph C. Wilson, Jr. and the Pegula family, owners of the Buffalo Sabres and lead developers of Buffalo's HARBORCENTER.

"Subject to the approval of the NFL owners and the satisfaction of customary closing conditions, the definitive agreement calls for the Pegula family to acquire all of the interest in the Buffalo Bills franchise from the Wilson trust. The parties intend to submit the agreement for approval by the NFL owners at their meeting in New York City on Oct. 8."

Congressman Brian Higgins said, "Western New York is cheering the news that Terry and Kim Pegula will be the next owners of the Buffalo Bills. The Pegulas have been the clear fan-favorite to carry the ball, following the distinguished 55-year tenure of the franchise founder Wilson family. The Pegulas' genuine love for this community is palpable. With their waterfront investment in HARBORCENTER, Terry and Kim Pegula have been a part of remaking Buffalo. We welcome their leadership contributing to continued momentum driving pride in our teams and in our community."

Cuomo said, "From day one, keeping the Bills in Buffalo has been one of our administration's top priorities, and reports that Terry and Kim Pegula have been chosen as the team's new owners highlight a tremendous step toward making that goal a reality. The Bills are an integral part of Western New York, from its economy to its culture and, as the team's new owners, the Pegulas will ensure that the Bills remain at the core of the region's identity - just as the late Ralph Wilson Jr. did for 54 years. Terry and Kim have already shown their commitment to the region through the Buffalo Sabres and the construction of the HARBORCENTER development, and I look forward to working with them in the years to come to keep the Bills in Buffalo, where they belong."

On his Facebook page, Schumer wrote, "Today's announcement is great news for Western New York, the Bills, and their passionate fans, who will now be able to breathe a huge sigh of relief. The Pegulas are the perfect choice to carry on Ralph Wilson's indelible legacy - like Ralph, they have a true commitment to Western New York, are people of serious integrity, and will be excellent owners. Most importantly, based on extensive conversations I have had with Terry over the past few months, he and Kim are deeply committed to keeping the Buffalo Bills in Western New York for generations to come.

"I commend the Bills' leadership, and especially Mrs. Wilson and Jeff Littman, for selecting the Pegulas, and for the thought and care they put into this entire sale process. I look forward to working with Terry and Kim in the weeks, months, and years ahead to ensure a speedy confirmation by the NFL and to help keep the Bills playing - and winning - in Western New York for many, many years to come."