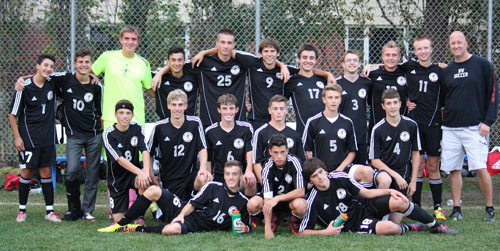 It's against rival Grand Island and the NFL title is in the net. N-W has won its previous two games 7-0 over Niagara Falls and 2-0 over Kenmore West, which makes its record 11-2 in Niagara Frontier League play and 11-4 overall.

The GI game starts at 7 p.m. at Niagara University.

"A win will make us co-champions, a loss will give GI sole possession, said Coach John Coulter.

Bari is currently second in the league in scoring with 18 goals but also has seven assists. Asklar is a playmaker, who has one goal on the season and eight assists.

"We channel most of our offense through him as we transition the ball from defense to offense," Coulter said.

Backing them up is an all-senior defense made of Nick Sperrazza, Mike Scholl, JP DenHaese and Joe Corio.

Sperrazza, a team captain and sweeper, started playing soccer at about age 5. He keeps his skills sharp off-season playing for the Northtowns Arsenal travel team.

He said the N-W team has had a lot of fun this season, but "we need to focus all our attention ... no sloppy mistakes ... to beat Grand Island."

"It's basically keeping your composure on the field and not letting things bother you," added Asklar, center/midfield and a co-captain.

Asklar started playing soccer at age 4 in the Niagara Pioneer house program. He is now on the Blackwatch Premier-Buffalo team, an elite team.

N-W has a lot of depth, Asklar said. "Every single person could replace someone else. Everyone wants to work hard. If one person goes down another person can step in."

"We have 19 guys on the team who all could be starters," Coulter said.

N-W is hoping to come out of the GI game on a high note as the team heads into sectionals where they will be taking on some of the Erie County powerhouses such as Clarence and Lancaster.

Last year, Sperrazza said, the N-W team went to the semifinals and lost to Clarence 1-0. "Ever since that day it's been a goal of mine to help our team win the sectional title."

Coulter predicts N-W will remain a force to be reckoned with in coming years due to a good layering of freshmen to seniors.

Sperrazza, who hopes to play soccer in college (he's looking at St. John Fisher College in Rochester and a major in sports management), agrees.

"We just keep producing better and better players and the talent never seems to run out here in Niagara-Wheatfield," he said.

Asklar, who plans to attend college and major in a medical field, also wants to keep playing soccer. It's the passion of the sport as well as an escape, he said. "You just forget about everything and just focus on playing soccer and enjoying yourself ... not focusing on colleges and what you have to do."

Coulter himself has been coaching at N-W for 12 years. He started playing at age 5 and coaching when he was 16. He still plays with many of the guys he used to coach on the Meercats, in the adult amateur Buffalo District Soccer League.

"I think you'll find a lot of us still play," he said. "You love the game forever."