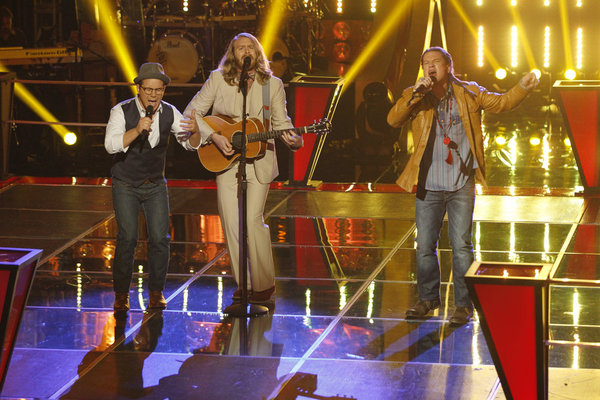 Let's face it: The performers on "The Voice" are not likely to duke it out with other acts in a ring-shaped stage once this season is over.

"So what is the purpose of the 'Battle Rounds'?" you might ask.

Well, in a competitive environment where the threat of elimination looms large and can overshadow artistry, this season's singers say the "Battle Rounds" actually make them feel less at odds and more inclined to create great performances.

"It's easy to get caught up in a competition to, you know, to become competitive and to lose sight of creating a musical experience for the audience. And I think the challenge of the 'Battle Round' is to do that - is to create something that isn't, necessarily, you know, one person trying to defeat the other, but just creating something really beautiful for people to watch," said Jon Peter Lewis of Midas Whale. He and his partner, Ryan Hayes, created one of Team Adam's best duet-duels when paired with Patrick Dodd for a rendition of Elvis' "Burning Love."

"When Patrick and ourselves, when we went into the 'Battle Round,' we wanted to make sure that we were working collectively to make each other, you know, look as good as possible," Jon said. "And I think it's a challenge to do that psychologically, and because, I mean, I think you need - people have a tendency to be competitive, and you're into the competition, and so you want to win, you know? But I think it has been nice to still just, I think, forcefully put that aside and try to just create something nice for the audience."

"I would just say that being in a duel you're constantly having to find a perfect balance and find a perfect blend, and so it's much different from the scenario in which you're singing a lead part," Ryan Hayes said. "And for me, at least as somebody who's been a singer their whole life, and in ... more of a choral scenario, it's natural for me and more comfortable to be in the position where all I have to do - well, I'm just searching for the perfect blend and it's awesome. I like it much better than singing solo."

Team Shakira's Monique Abbadie said she had "an amazing experience" working with Luke Edgemon in the "Battle Rounds." Though her goal was to beat him (and she did), Monique said she, too, benefited from some teamwork.

"It teaches us how to work together, because you have to do harmonies, and you have to spend a lot of time with the other competitors. So, it builds a bond between you two. And it makes you stronger as a duo. And it allows you to see from the other person's perspective and to really just become one on the stage, and treat it as a performance. Because at the end of the day, it is a performance, and you're doing what you love, and you're doing something that is your passion.

"So, it's just great to be able to put on a show, together, as one, and to hear the response from the judges and from the audience is just an incredible thing, which means that you did what you set out to do, which is to do a great show and to just perform."

The "Battle Rounds" also are an opportunity for young singers to get their feet wet on stage. Team Shakira's Mary Miranda viewed her duet/duel as an opportunity to learn from fellow Latin singer Cathia, whom she ultimately defeated.

"The 'Battle Round' prepared me because I was actually singing with one of the best singers of the show, which is Cathia," she said. "It helped me prepare (for) next round because, basically, it's going to get bigger and, like, all of them are just great singers, and I just, it prepared me ... it helped me a lot."

Working with Shakira, Mary said she's learned how to make her singing more heartfelt, which has helped her connect with the audience.