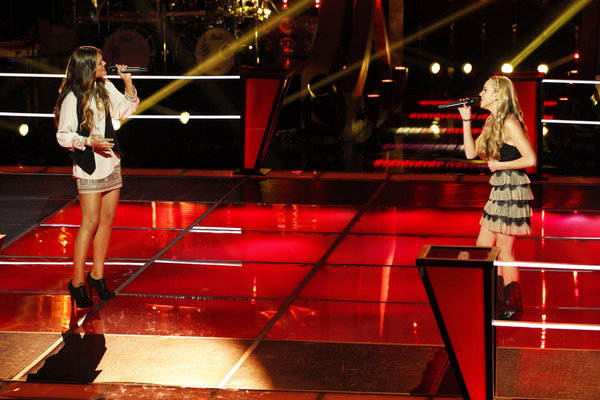 "The Voice" always saves the best for last.

When it comes to the "Battle Rounds," the final duel is the matchup the whole episode leads up to - the title fight.

This spotlight performance usually features seasoned performers or singers with big, booming voices. It doesn't typically serve as a platform for two country-indie vocalists under the age of 20 - artists whose combined career stage time is less than what most professional acts have logged this year alone.

But when Danielle Bradbery, 16, and Caroline Glaser, 18, took to "The Voice" stage to end week one of the season four "Battle Rounds," it wasn't hard to imagine why they were in the prime slot.

"Girls, your performance was as refreshing as tangerine ice cream," Shakira said. "I'm impressed by the uniqueness of your voice, Caroline, and by the juxtaposition between the lack of experience that you (Danielle) have, and your enormous talent."

Adam Levine told Danielle her performance was spot-on, and he described Caroline's voice as "ethereal, magic and wonderful."

"Danielle, I don't know what your parents are feeding you, but I want a big loaf of that," he told her. "Your natural singing ability blows my mind."

When asked about her talent in a phone interview Wednesday, Danielle couldn't attribute it to any one thing.

"I don't know," she said. "I just - I mean, I don't have - never had singing lessons; I've never had as much experience as I have now. And the ability I have now I hope to grow. And I don't know, it just comes out on stage; and whatever happens, happens, and I try to do the best I can."

When Caroline wasn't chosen, she became eligible for a steal. Coaches Adam and Usher quickly placed bids for her services.

"Caroline, what you do just astonishes me," Adam said. "Man, I've gotta' have you. You lost the battle, but you definitely have not lost the war, and I want you."

Usher, who called himself "Gusher," as he gushed over Caroline, said, "I love your voice. I love the potential of what I know I can do with you."

A floored Caroline, trying to both digest what the coaches said as they fought for her, and to pick one, decided to join "Team Adam."

"I did not expect any of that to happen," she said afterward. "I am in absolute shock, right now, that I am on Adam Levine's team."

Blake, in a post-show interview, said, "I'm a little bit afraid of the combination of Adam and Caroline, because Adam probably has a little bit better understanding of that singer-songwriter-type thing. There's no telling how far they can go."

Caroline came into "The Voice" as a guitar-playing singer-songwriter. In a phone interview Wednesday, she said her time on the show - in the blind audition and "Battle Round," and working with Blake and Adam - has taught her how to be a better performer. Prior to this experience, she was most comfortable singing behind her instrument. Now, she has confidence taking the mic and walking the stage.

Danielle and Caroline both advanced to the "Knockouts," which begin airing next week.