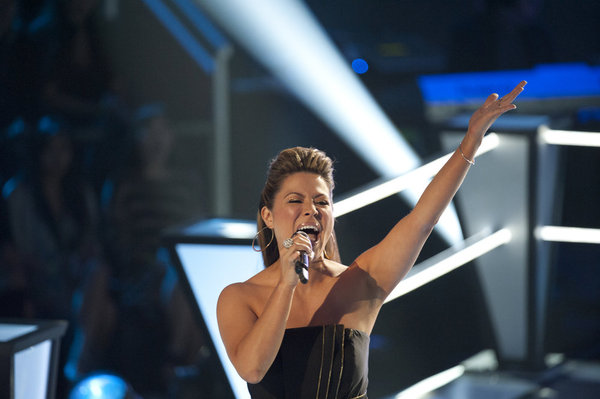 Angie Johnson performs on "The Voice" on NBC. (photo by Lewis Jacobs/NBC)

They say that "Neither rain, nor snow, nor sleet, nor hail shall keep the postmen from their appointed rounds."

It's kind of the same thing with singer Angie Johnson - except her target was making music, and her obstacles included age, a trip to the Middle East and a "Battle Round."

Despite anointed pipes and a role with the prestigious Tops in Blue Air Force vocal band, the 31-year-old had given up on music. She was pursuing an academic career and serving overseas last summer when, by chance, a video of her singing Adele's "Rolling in the Deep" made its way to YouTube. More than one million views later, Johnson found herself with an invitation to perform on NBC's hit reality series "The Voice."

It was there, performing with Team CeeLo Green (including frontrunners Juliet Simms and Jamar Rogers), that Johnson rediscovered her talent. What she learned was "To believe in yourself - no matter what. No matter what," she said.

"That's something I've been struggling with over the past couple of years because, prior to the YouTube video happening last August when I deployed, I had completely given up music. Completely," Johnson said Thursday. "I live in Nashville, Tenn., and I was not singing anywhere. I wasn't singing; I wasn't writing music. I was in school full time to get a degree in psychology.

Working with "Team Red Zone," Johnson was encouraged by the perseverance of her teammates.

Somewhere between the time she auditioned in October and competed in the "Battle Rounds" in December, Johnson rediscovered her passion for music.

"This whole thing, for me, has just been, like ... there was something I was meant to do. I was meant to do music. And I gave up on myself, (but) it didn't matter, because I'm meant to do it. So, it found a way to re-present itself in my life," she said.

Though Johnson's stint on "The Voice" was short (she was eliminated in the "Battle Rounds"), it opened plenty of doors for the former Air Force intelligence agent.

"Oh my gosh, there's so much," she said. "There's so many exciting things."

Johnson will perform this weekend at the Buffalo Niagara Film Festival. She recently filmed a spot on "Last Call with Carson Daly," and she will be featured on an upcoming episode of "GAC Noteworthy at the Opry."

Beyond that, Johnson is preparing to record a six-song EP and then a full-length album.

"I'm really excited about people getting to hear what I do, and who I am," she said. "And people are hungry for it, and they let me know on Twitter and on Facebook. 'When are you going to put out original music?' I'm like 'Oh, I want to. I really do.' But it takes time, you know? It takes time.

"Because I had quit music, I really wasn't set up in any way, shape or form to receive all of these blessings that have been coming my way. So, it's kind of like I'm starting from scratch. It's kind of like I just moved to Nashville and I'm doing everything from the start all over again.

"It just takes time; but, yeah, that is definitely in the works."